Open Your Eyes to the World: New Book Encourages Living Life to the Fullest

Sarah Stackhouse had a goal: to be published by age 25. She created an inspiring book about living a life full of adventure. 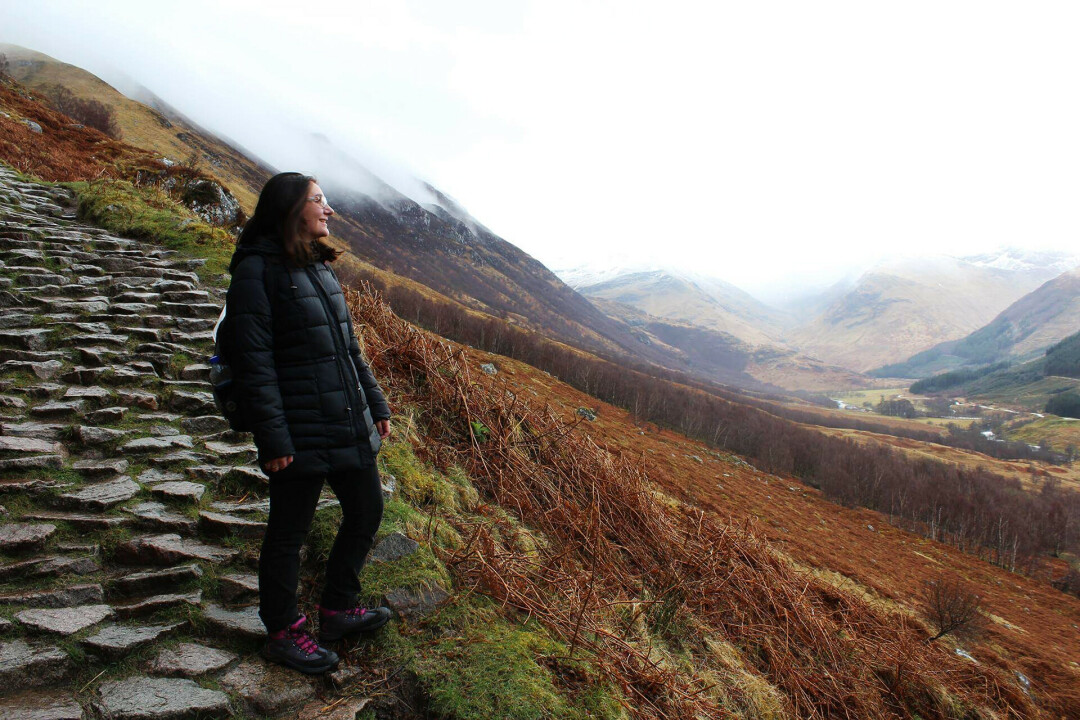 LIVE YOUR LIFE TO THE FULLEST. Sarah Stackhouse, pictured above, has quite the bucket list. And she recently crossed one more thing off her list: becoming a published author. (Submitted photo)

Bucket lists can be tricky, and oftentimes there are things that never get crossed off. One of the items on Sarah Stackhouse’s bucket list was to become a published author by the time she was 25 years old.

Not only did she achieve that goal, but she achieved it with great enthusiasm, as she recently published her illustrated book, Opening Our Eyes to the World.

Now a Chippewa Valley resident, Stackhouse grew up in the Upper Peninsula of Michigan, moved to Minnesota her sophomore year of high school to play hockey, and ended up in Pulaski, Wisconsin, during her junior year.

You give a piece of your heart wherever you go, knowing that in return, you are getting memories, experience, and wisdom.

During her senior year of high school, she traveled to Thailand as an exchange student. “We hosted exchange students growing up in my house,” Stackhouse said. “When I became a senior, I wanted to pursue that as well.”

Opening Our Eyes to the World is meant to create conversations about what adventures families and friends have had in their lifetimes. 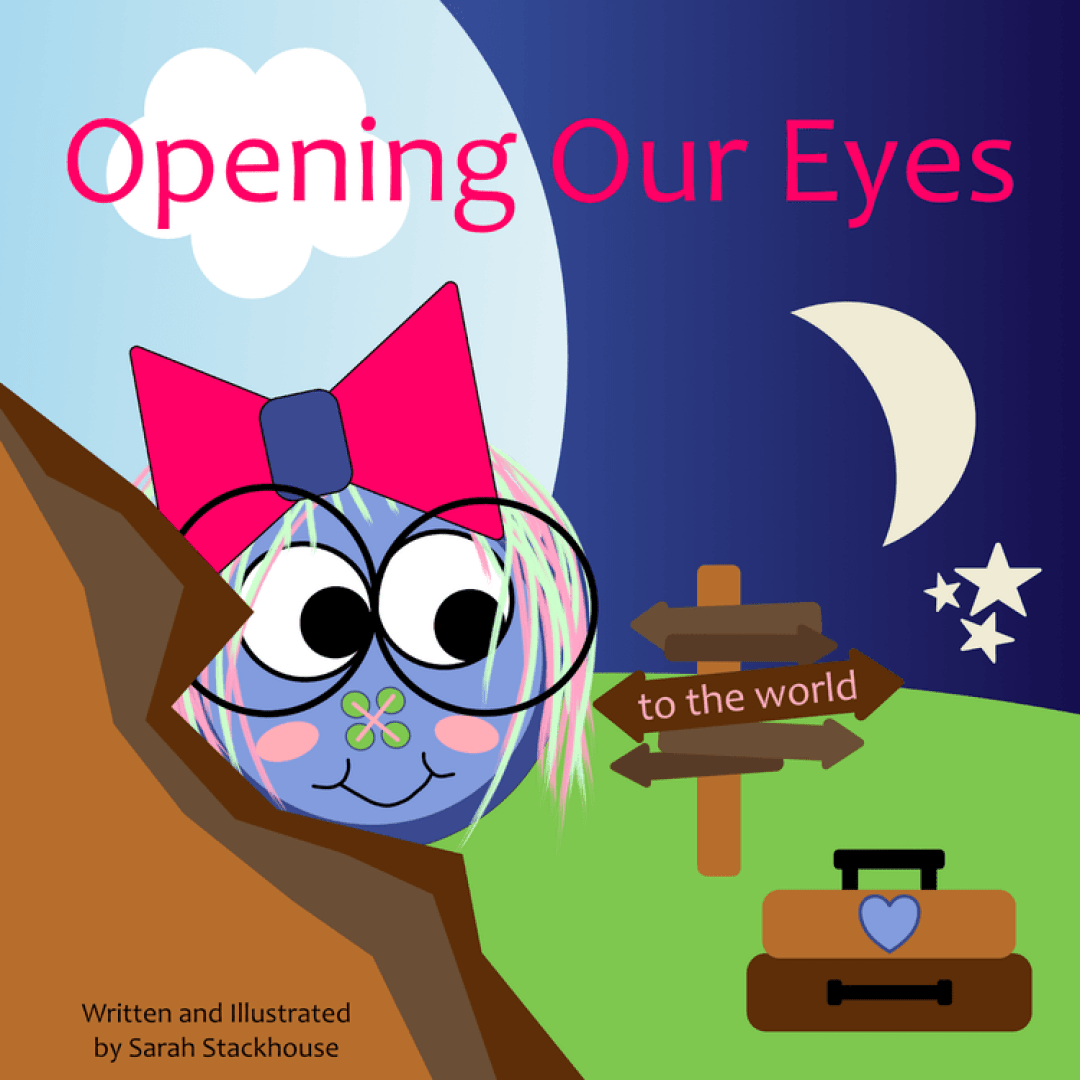 The main character of the book is a nameless button, but for Stackhouse’s purposes, she calls the button “Button Blue.”

“I had to make it general where everyone could find themselves within the button,” Stackhouse said.

The story starts out with Button Blue attached to an adventure shoe that has lots of buttons on it. Stackhouse wanted each button to represent an adventure, or a piece of your heart.

“You give a piece of your heart wherever you go, knowing that in return you are getting memories, experiences, and wisdom,” Stackhouse said. 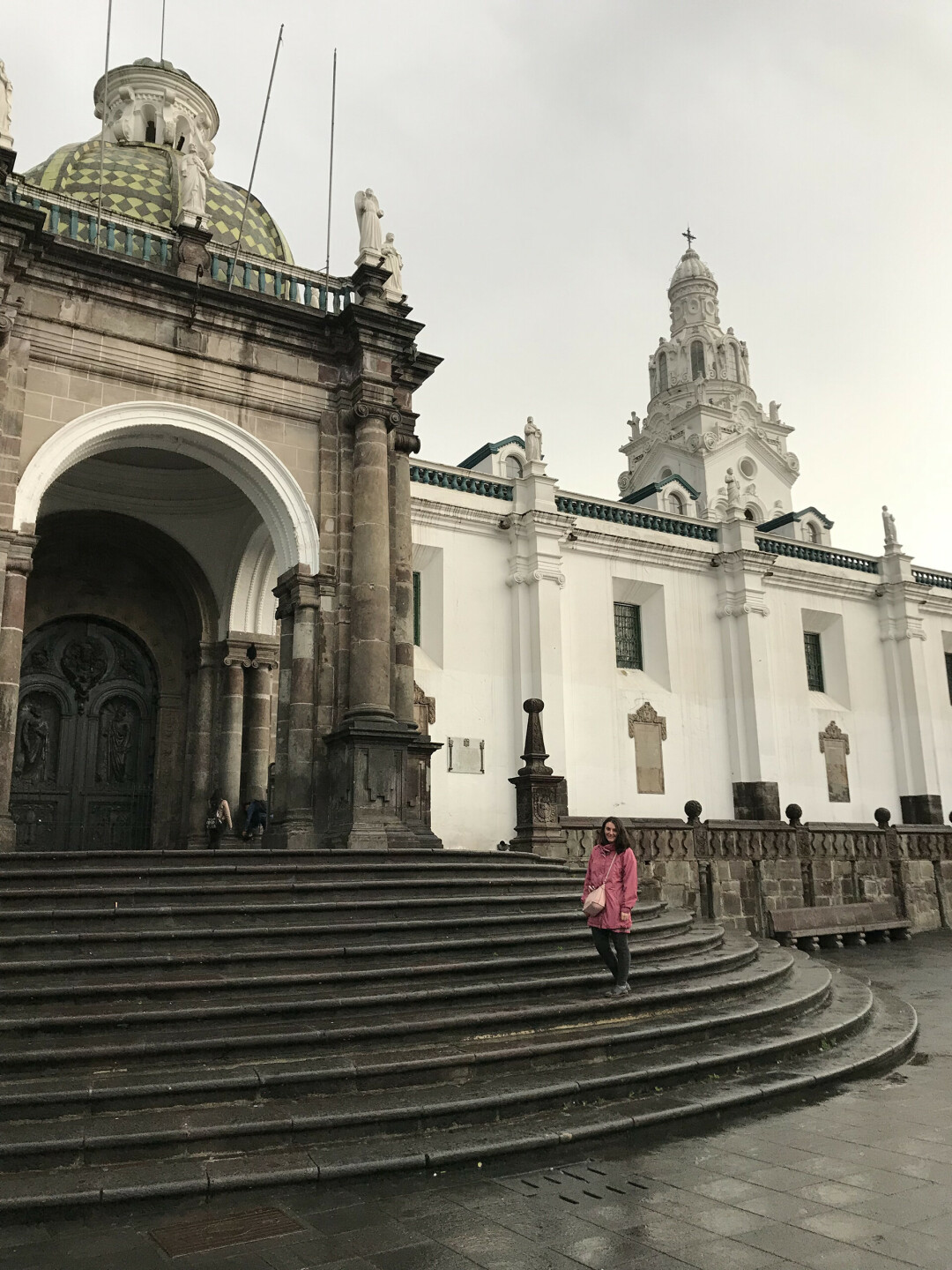 Some of the adventures that Button Blue experiences are learning different languages, going to festivals, going on a safari, trying chai in different countries, and caring for the planet and animals.

When Stackhouse wrote her book, she didn’t want to specify countries. You can try chai in Eau Claire or all the way in India, she said, but she wanted to encourage people to find themselves – wherever that may be.

Eventually, the adventure shoe runs out of adventures, and all of the buttons are gone except Button Blue.

“I always ask the kids, ‘What would you do with your last adventure?’ ”

“I always ask the kids, ‘What would you do with your last adventure?’ ” Stackhouse said.

Button Blue decides what it wants to do, and starts planting all of the shoe’s memories from the adventures into the ground to grow a button tree. Instead of spending that last adventure, Button Blue wanted to give back. 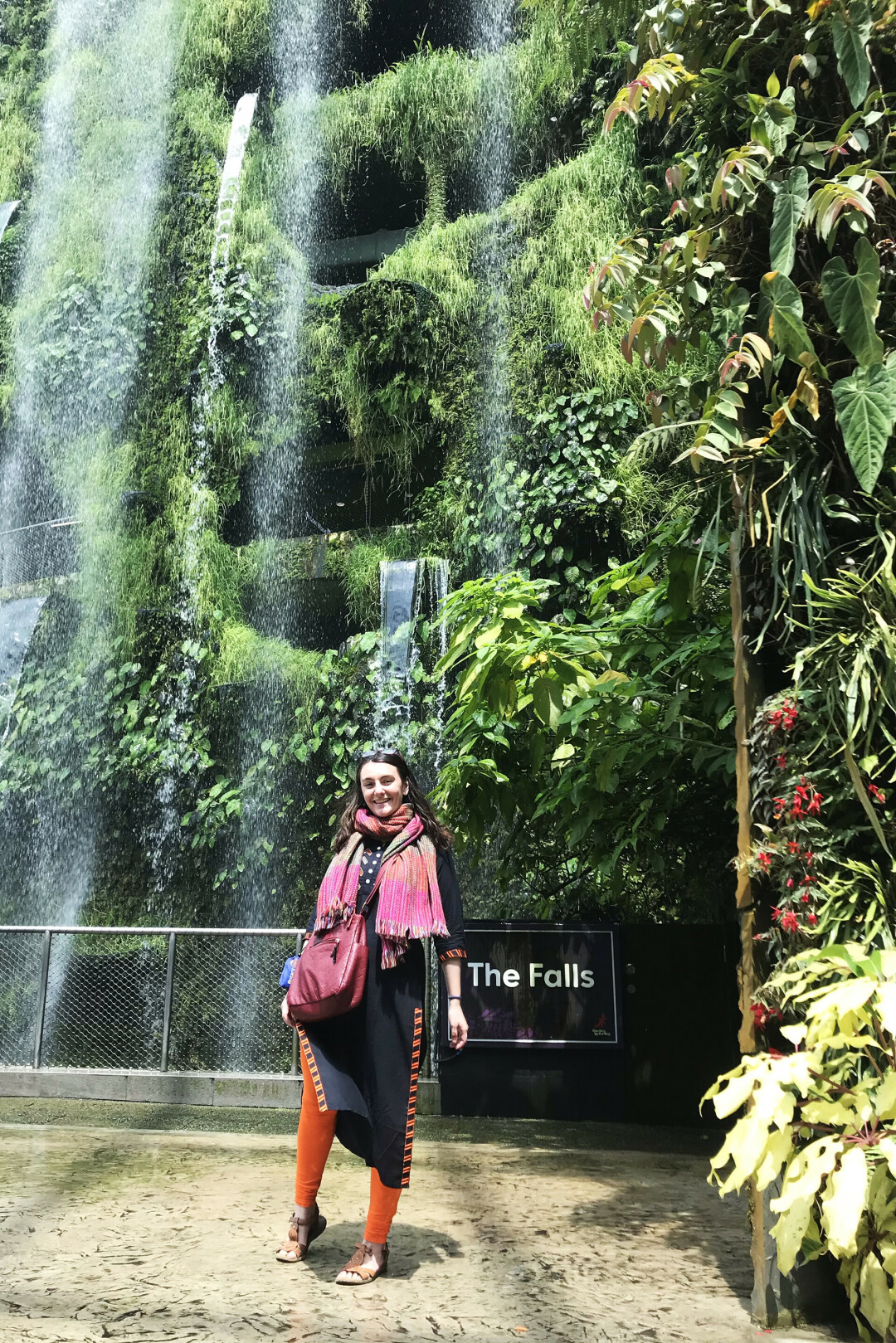 “Metaphorically, this book is kind of deep for kids,” Stackhouse said, “but I really wanted them to have the opportunity to learn things like what it means to be empathetic, or what wanderlust is.”    Stackhouse never considered herself to be an illustrator, and it was the one thing that was holding her back. Coming up on her 26th birthday, she decided it was time to cross off “publish a book” from her bucket list.

She got a software for illustrations, and tinkered around with it for a while. The whole thing came together in a matter of two to three months before publication. When it came time for publishing, she created her own company, Lavender and Berries Publishing. Opening Our Eyes to the World was published last December, not long before Stackhouse’s birthday in January. “I was kind of cutting it close,” Stackhouse said. 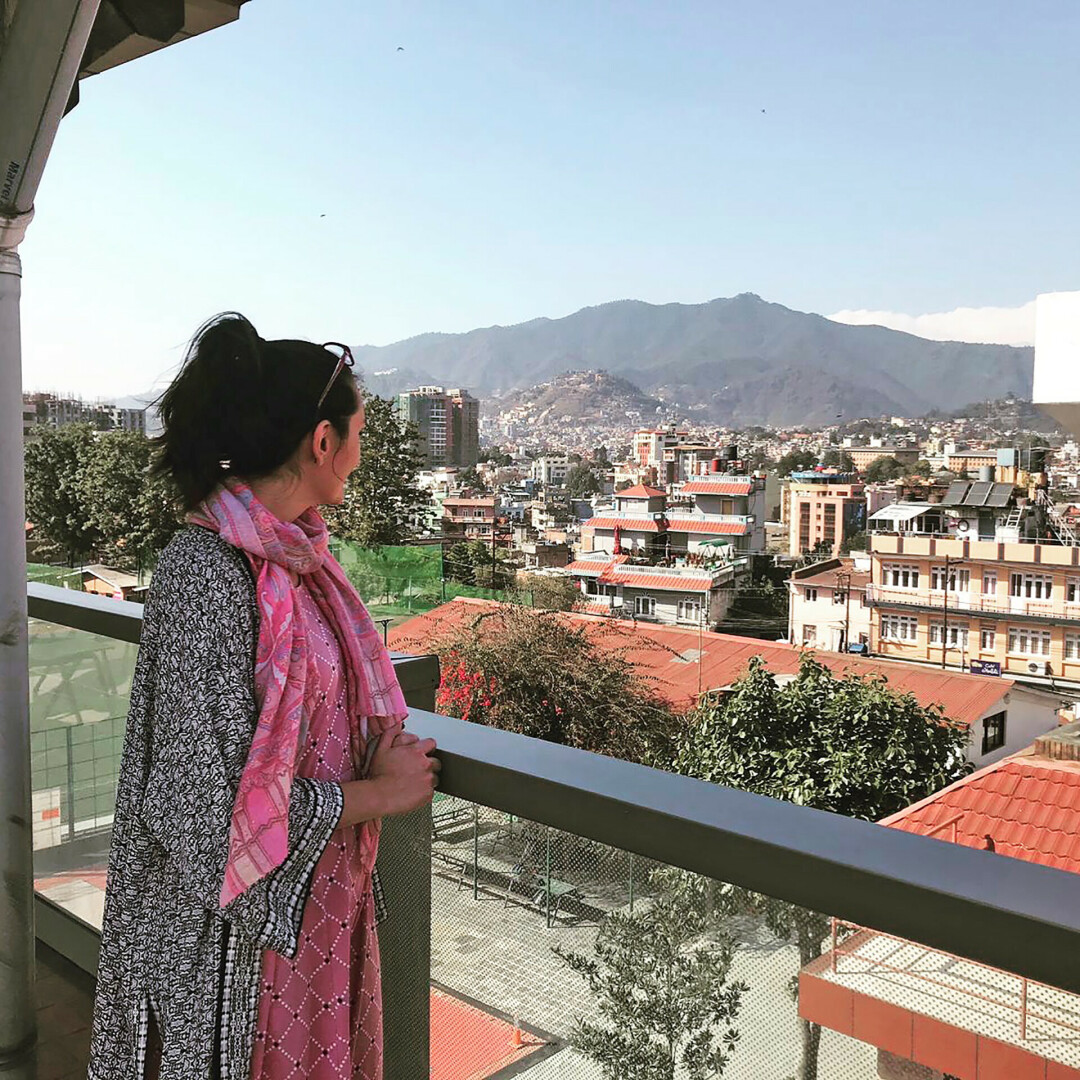 But why specifically the age of 25? “If you don’t put a date with your bucket list items, it might not happen,” Stackhouse said. We all have dreams, ideas, things we want to accomplish, she said, but they get pushed to the side because they aren’t made a priority.

“I never in a million years would have imagined that I could do it,” Stackhouse said. “I had the time of my life making the book.”

You can buy Stackhouse’s book at lavenderandberriespublishing.com or at The Local Store, 205 N. Dewey St., Eau Claire.