‘Since I was 16 years old, I had the goal to be an event planner for an NFL team’ 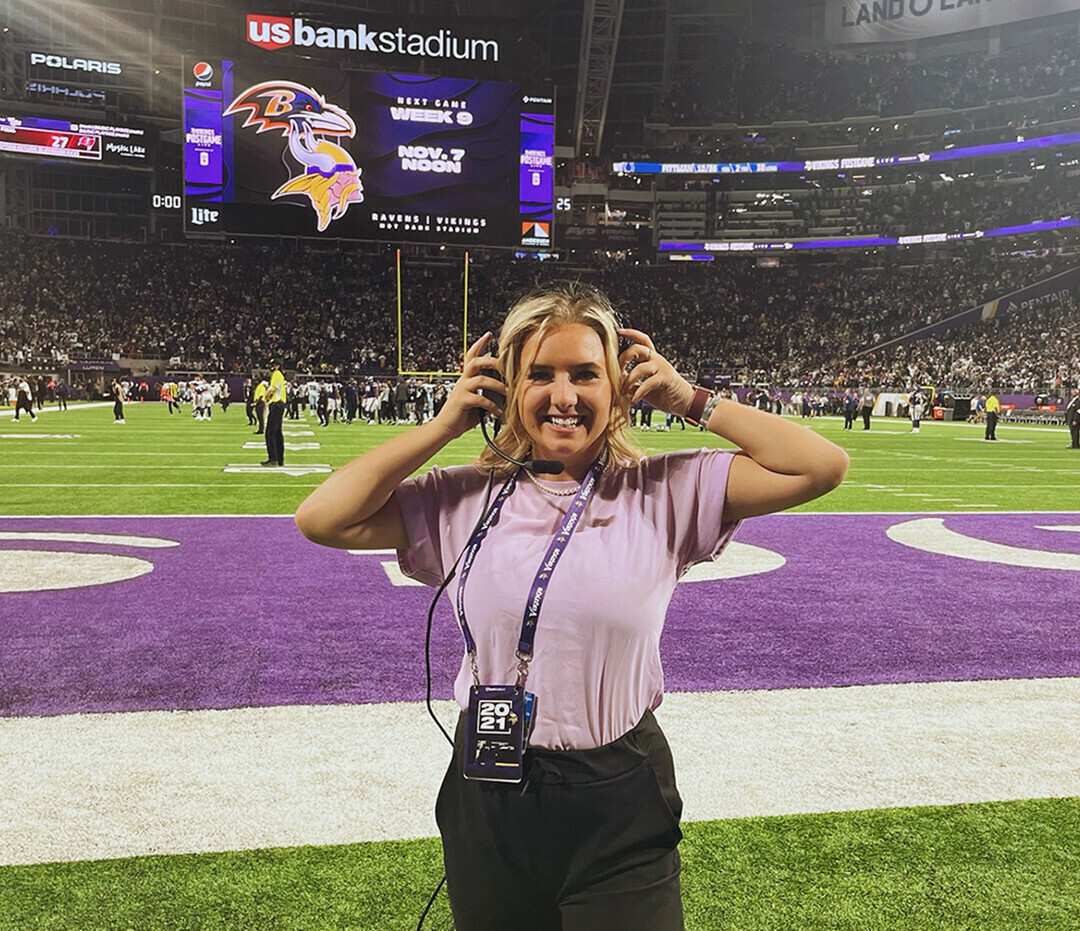 UW-Stout alum Samantha Ziwicki is living her dream working for her favorite NFL team as a special events associate.

Ziwicki, a May hotel, restaurant, and tourism management graduate, started working for the Minnesota Vikings in mid-July as a special events associate. The one-year position is helping her gain more experience in event planning.

“Since I was 16 years old, I had the goal to be an event planner for an NFL team,” said Ziwicki, of Minneapolis. “To get the opportunity on my first post-college job is just pretty spectacular. I love sports. Specifically, football is one of my favorite sports to watch. Being able to combine the two is a perfect storm for me. I love it so much and it is so fun.”

To work for her hometown team is even more magical, Ziwicki said, noting as a child her family would dress her in a cheerleading costume to cheer on the purple and gold.

The first event she helped with was this year’s Vikings training camp in July and August.

Since I was 16 years old, I had the goal to be an event planner for an NFL team. To get the opportunity on my first post-college job is just pretty spectacular.

“Training camp is huge for all the teams,” she noted. “We welcomed thousands of people over the 12 days to watch the Vikings practice, play games and interact with the players. The Vikings like to put on a production for the fan base, especially this year as a welcome back to football.”

Ziwicki helps make sure fans have food and beverages during social hours in the Vikings’ Legend area of U.S. Bank Stadium before games.

Recently she planned an event at the Vikings Museum in Eagan, Minnesota, for a social hour where fans met Vikings legend John Randle, a defensive tackle who was voted into the Pro Football Hall of Fame in 2010.

“I’m a very detail-oriented person,” Ziwicki said. “I chose the hospitality program at UW-Stout because I like to do things for other people. I love putting all the work into an event and seeing it through someone else’s eyes. It is so meaningful for me. The execution part is so exhilarating, and to see people have a good time and come and forget about the outside world for a little while feels so good.”

One of the big games this year will be the rivalry when the Vikings take on the Green Bay Packers Sunday, Nov. 21, at noon at U.S. Bank Stadium in Minneapolis.

Ziwicki knows that is going to be a big show with 66,000 fans from both teams.

She will be part of the Vikings Voyage space in the stadium helping execute a two-hour pregame social for about 160 fans. Part of that is sharing Vikings facts, helping lead the “Skol Vikings” chant and making sure there is enough food and beverage for all.

Meeting the Vikings players has been a fantastic part of her job, Ziwicki said.

“They are so nice,” she said. “They have kind hearts.”

She helped plan a Pamper Her Purple event in early October for the American Cancer Society where 10 cancer survivors were invited to a spa event at the Omni Hotel - Vikings Lake Spa in Eagan with Vikings fullback C.J. Hamm.

“It was such a special day,” Ziwicki said. “C.J. talked about the American Cancer Society and how meaningful an event like this is. It was the most magical event I got to be part of. It was amazing to hear these women speak about their stories and how strong they were. To be able to connect with a Vikings player and have that support was so awesome.”

While at UW-Stout Ziwicki was captain of the Blue Devil dance team, a Stout Ambassador, gave campus tours for the Admissions Office and was a member of the Alpha Phi sorority, where she planned the Red Dress Gala, which raises funds for women’s heart health. 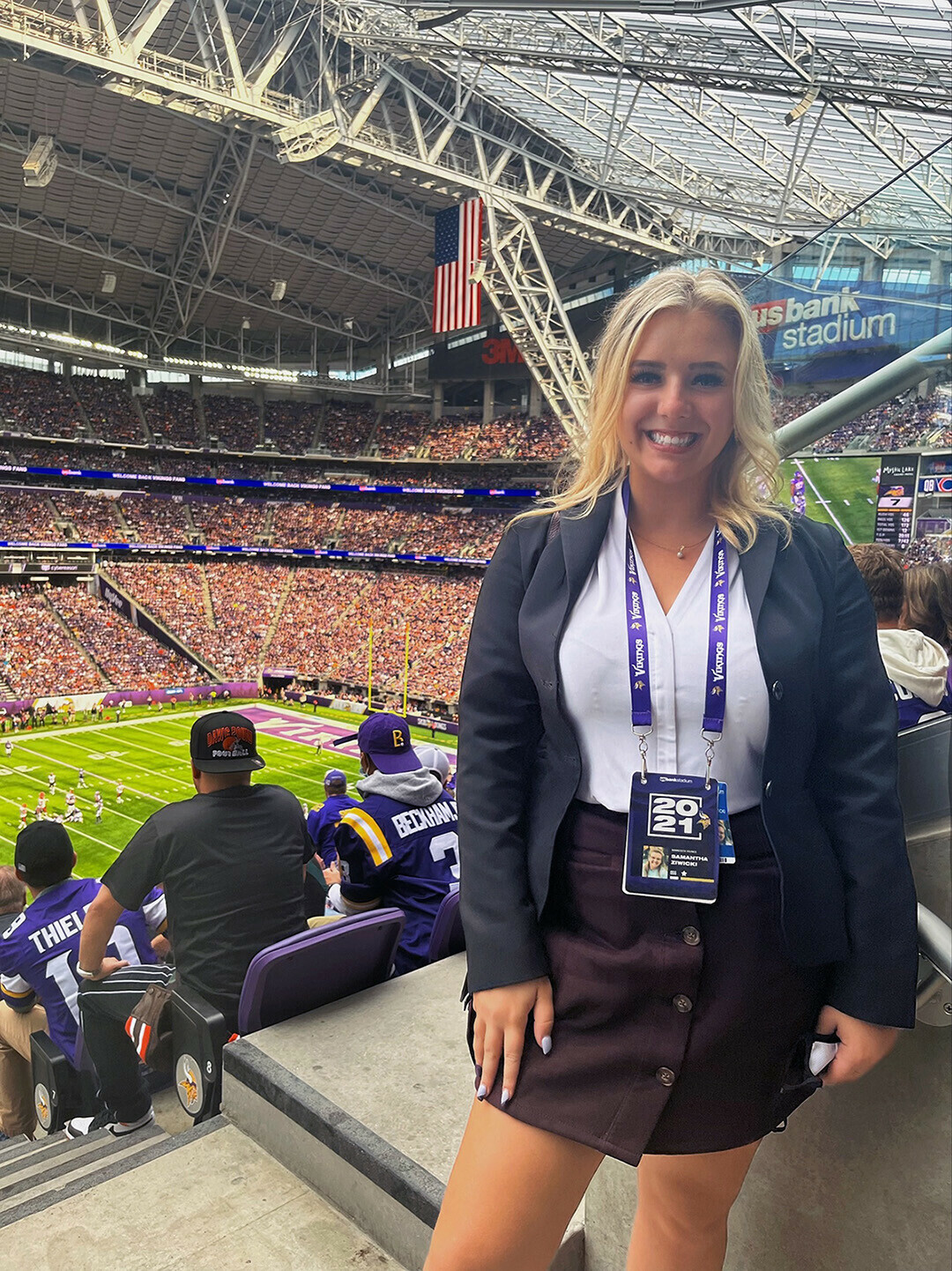 “I just felt so loved on campus and had such immense support from my supervisors,” Ziwicki said.

She cited classes such as Sports Event Management that “gave that insight into event planning in the athletic industry. It was probably my favorite class at UW-Stout because it felt so relevant to what I wanted to do.”

She took part in two co-ops through Career Services while at UW-Stout. One of them in 2020 was at the Magic Kingdom Park at Walt Disney World as an attractions cast member in Orlando, Florida. She also worked with the St. Cloud Rox baseball club in St. Cloud, Minnesota, within the Northwoods League in 2019.

“Samantha understood the experiences sporting events create for the fan base and the community within the sports team by planning and executing the event while entertaining many,” Schoonover said.

“Our goal at UW Stout is to open doors to all the possibilities in careers that students are not yet aware of. For example, the local, state and federal agencies work with event coordinators years in advance to deliver an experience for all to enjoy with safety and security as a priority. Likewise, the business-to-business companies supporting the sports venue provide careers also. We love our sports at all levels and all kinds of participation, so it would only make sense for someone like Samantha to excel as she has done so quickly because of her education at UW Stout.”

Jay Jones, assistant professor in the School of Hospitality Leadership, is pleased Ziwicki is working for a major sports team and noted her positive energy.

“Sam is dedicated to whatever she sets out to do and has a strong work ethic,” Seefeldt said. “She is organized, detail-oriented, has outstanding communication skills and excellent follow-through. She also brings her welcoming smile and positivity wherever she goes. For as long as I’ve known Sam her dream job was in sports event management and she had her eye on working for the Vikings, the team she cheers on with great pride. I am so proud of her for fulfilling that first career goal.”

Event coordinators are needed everywhere: sports and recreation, government and politics, leisure and entertainment, and so on, Seefeldt said. The work is demanding but rewarding. “UW-Stout’s hotel, restaurant and tourism management program prepares students well for this career path,” she added.

After she graduated, Ziwicki received three job offers on the same day. “Ultimately, the Vikings one was the biggest opportunity,” she said. “I had to take it and run with it and see if this really was my passion and explore the option.

“I knew I would have fun,” she added. “My biggest goal is to love what I do.”