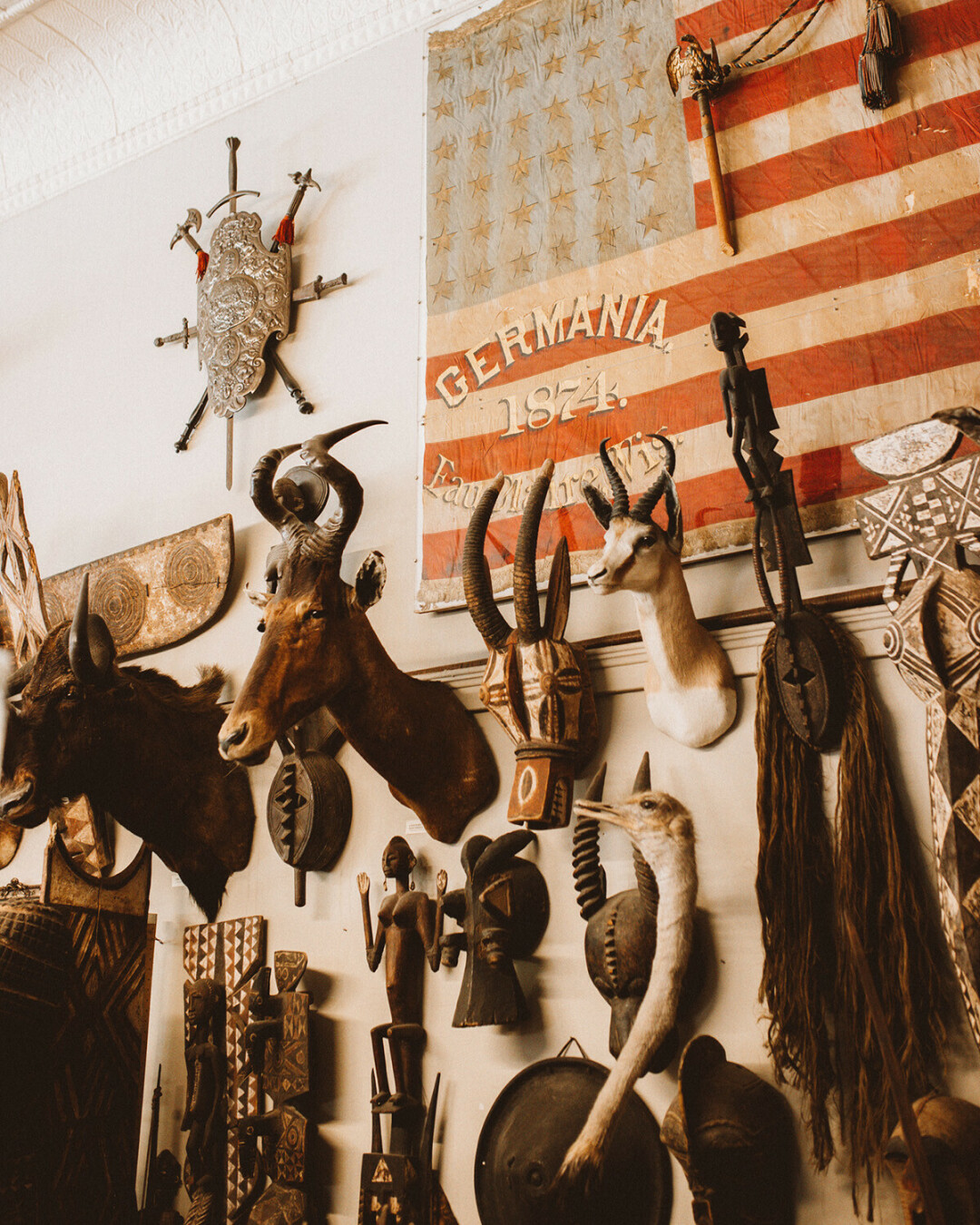 Among the countless curiosities in the Antique Emporium are taxidermied animal heads and a flag carried by a German-American regiment from Eau Claire in the Civil War. (Submitted photo)

After the better part of four decades, downtownEau Claire’s Antique Emporium will soon become history itself.

Pablo Group, an Eau Claire-based real estate company, announced Thursday that it was buying the Antique Emporium, 306 Main St., from Hugh Passow, who has owed the former Masonic Lodge and operated it as a multilevel antique store since 1985. Passow will continue to operate the Antique Emporium out of the building until the middle of next year, and a two-year renovation process is expected to begin in the spring.

Pablo Group – which among other things owns The Lismore Hotel, several restaurants, and commercial real estate – said Thursday “the building will be renovated and updated while preserving its historical integrity.” The building is on the National Register of Historic Places, and over the years has housed other businesses, including Kelly Furniture Co., the Eau Claire School of Dance, and Main Street Deli.

CoLab, Pablo Group’s co-working space, will relocate from 312 S. Barstow St. into the Antique Emporium building once sufficient renovations are complete. However, the building will have multiple tenants and mixed uses, said Jenny Fesenmaier, project manager for the Pablo Group. 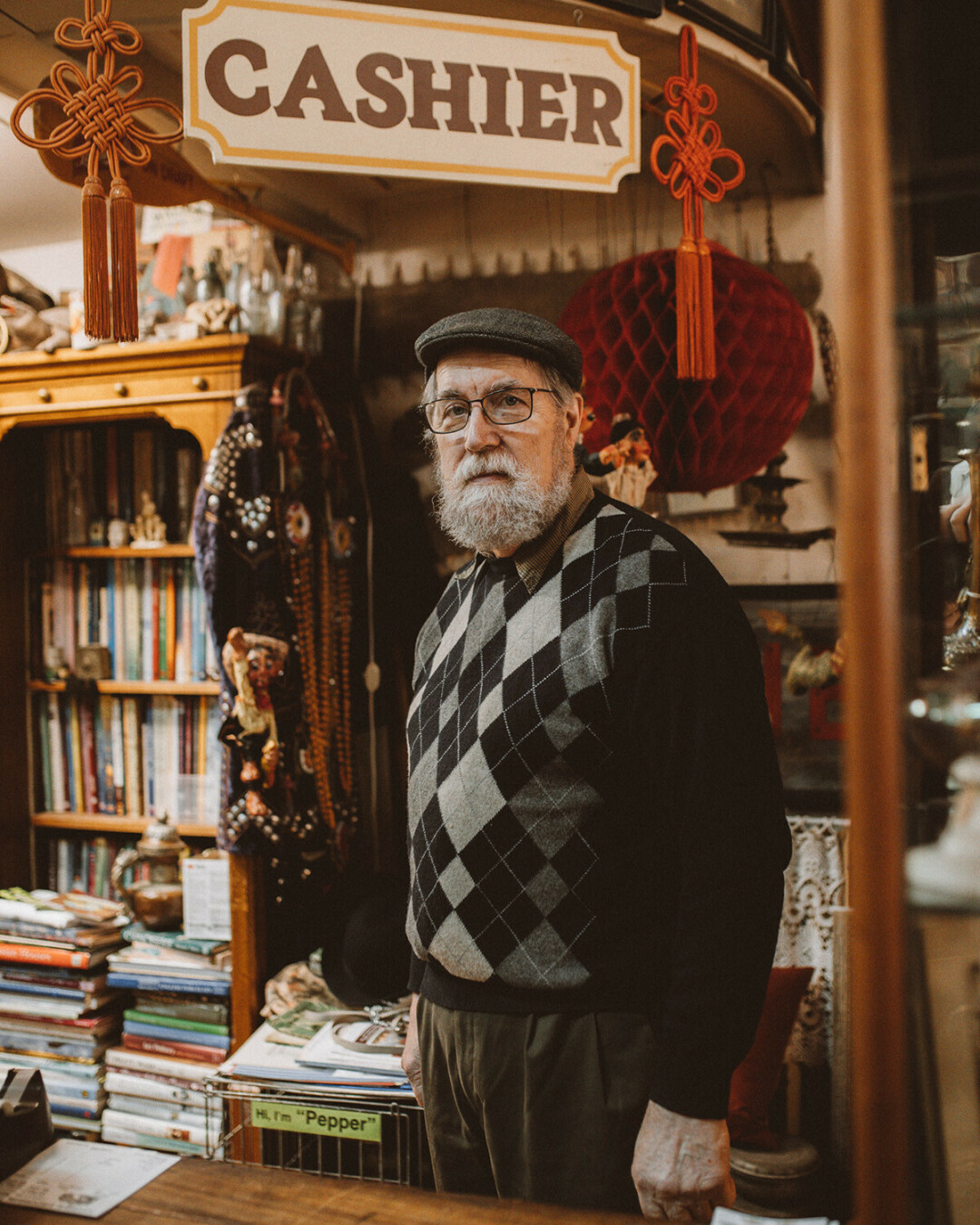 We don’t really want to quit, but I’m 69 years old and the world has changed: the antique business is not like it used to be. Everything is online now, and I can’t run out to an auction and buy big lots to haul back and poke through like we used to.

Passow has operated the Antique Emporium for more than 40 years, first on Galloway Street – where he says it was one of the first two antique malls in the state – and since 1985 in the vast brick building, which is home to treasures ranging from exotic taxidermy to vintage paintings and prints to antique furniture.

“I really love it here,” Passow said Thursday. “I love coming in every day and looking at my things.” However, he added, “It’s a big building, and it’s gotten a little much for me to take on.”

Passow said he may continue the Antique Emporium’s operations on a smaller scale in another location, and that he plans to increase sales online. Passow said he and his wife, Marcella, had been considering selling the building for a while, and that the decision was expedited by the pandemic.

“We don’t really want to quit, but I’m 69 years old and the world has changed: the antique business is not like it used to be,” he added. “Everything is online now, and I can’t run out to an auction and buy big lots to haul back and poke through like we used to.”

An inventory sale will being immediately. The Antique Emporium will be open 10am-5pm Thursdays-Saturdays through the holiday season, and some items will be for sale on eBay and AbeBooks. In the new year, Passow expects to hold auctions to sell some of the items.

Pablo Group was founded by Julia Johnson, Zach Halmstad, and Jason Wudi. In addition to the Lismore and an ownership stake in The Oxbow Hotel, Pablo Group operates Racy d’Lene’s Coffee Shop, Nucleus Cafe, the Fire House Bar, The Informalist, and ECDC.

“We have found a lot of treasures at the Antique Emporium over the years – including the tip jar at ECDC,” Johnson said in a media release. “It will be sad to see Hugh and his business leave the building, and we hope the building’s next use will be beloved as well.” 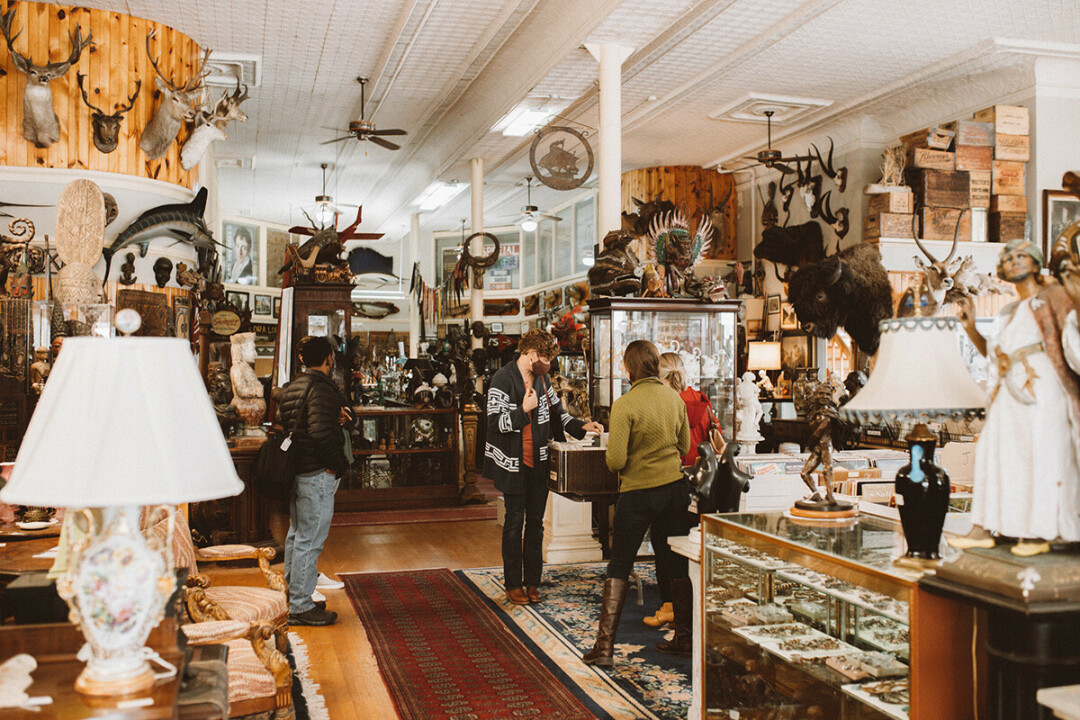 Exploring some of the Antique Emporium's old-timey inventory. (Submitted photo)

The building’s next use will include CoLab, which Pablo Group opened in a building just across Barstow Street in 2019. CoLab, which provides coworking space to entrepreneurs and remote workers. While CoLab closed at the onset of the pandemic in 2020, it reopened last June and its membership has grown larger than ever, said Elaine Coughlin, CoLab’s community manager. Moving into the Antique Emporium building will allow CoLab to meet expanding demand for space, particularly from remote workers.

“There seems to be a real need for those dedicated desks, so we do need more physical space,” Coughlin said.

However, CoLab will only occupy one floor of the huge Romanesque revival building – which, if you count a mezzanine level, has five stories (plus a full basement). Passow, the current owner, said the first floor would be an ideal space for a restaurant.

Fesenmaier, the project manager, said Pablo Properties is considering many options about what business Pablo or its tenants could put in the building.

“We have a lot of ideas,” Fesenmaier said. “It has a history of retail, but we’re also exploring other business ideas.” 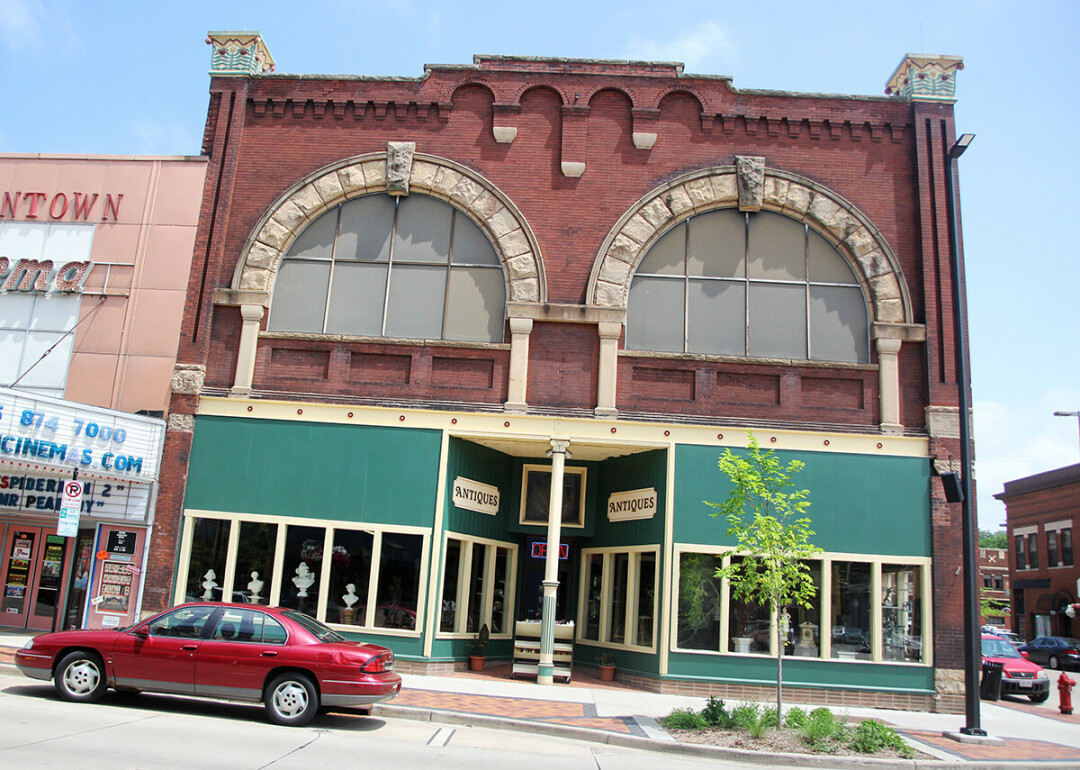