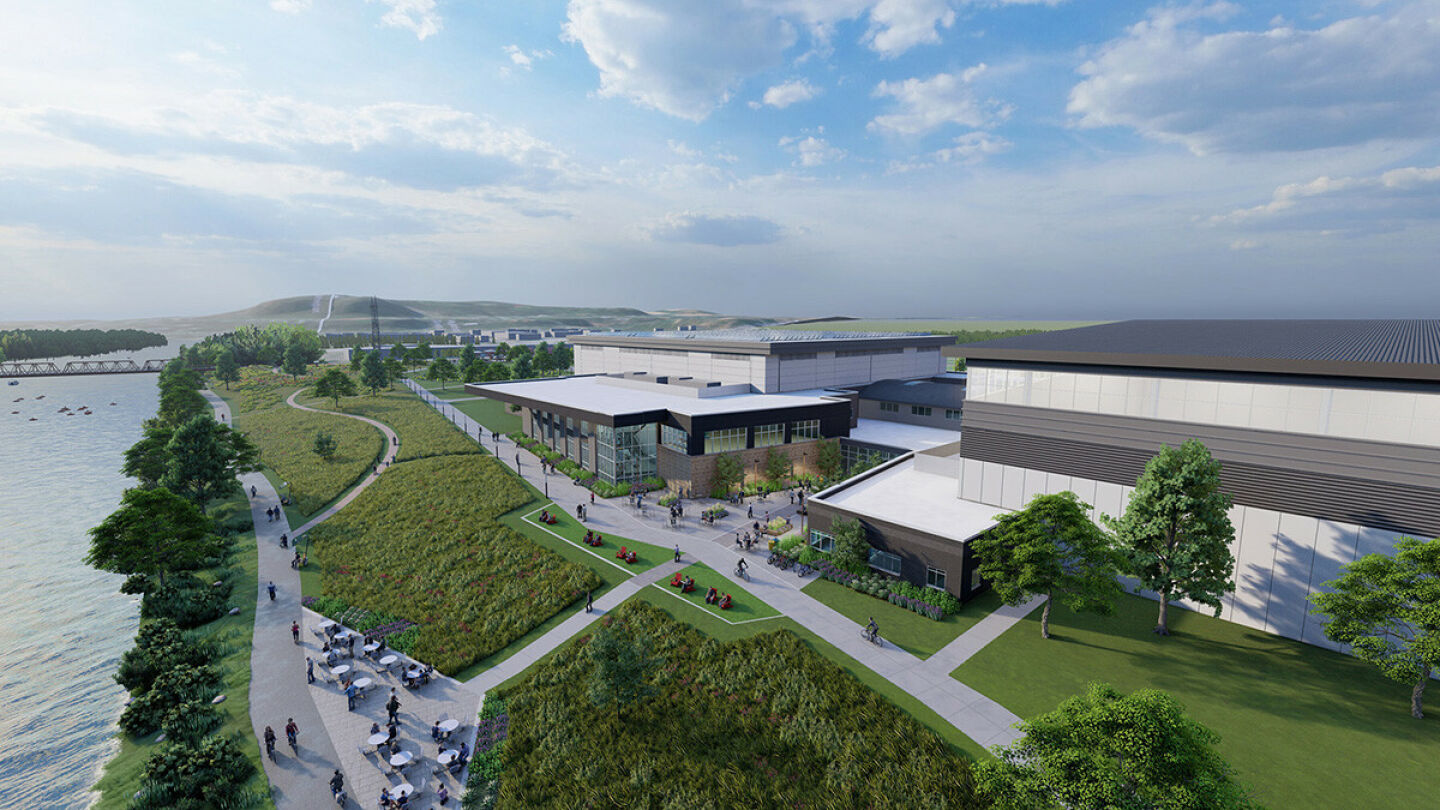 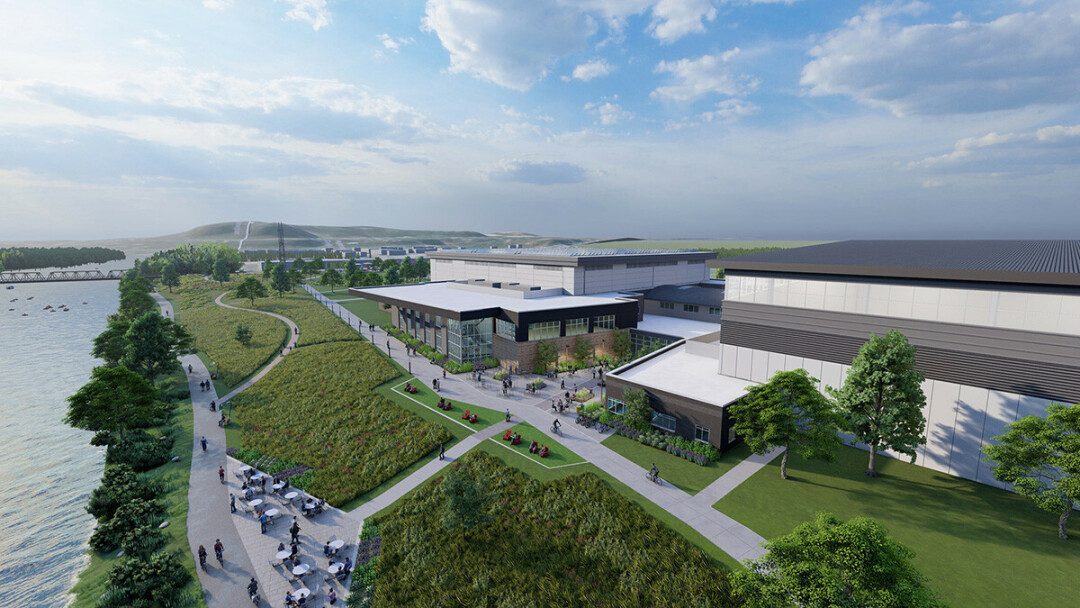 DOWN BY THE RIVERSIDE. This rendering of the Sonnentag Event Center and Field House shows the setting along the Chippewa River a, mile west of the main UW-Eau Claire campus. (Image via UWEC)

Under the terms of a resolution approved by the Eau Claire City Council this week, the city will help provide approximately $14.5 million toward the long-planned project to build a public-private facility on Menomonie Street.

The funding will come from a variety of sources – including state grants and hotel room taxes – and most will not fall on regular city property taxes, according to city documents. In fact, much of the money will come via a Tax Increment Financing district, in which a project is partially funded through new property taxes generated by new private construction – in this case, an expected clinic and hotel that would be part of the overall development.

The agreement was negotiated by the city, the Blugold Real Estate Foundation, UWEC, and Eau Claire Community Complex, the nonprofit entity that will own the facility. Under the deal, the city will help provide about $4.2 million in infrastructure improvements in the Menomonie Street area and the city and Visit Eau Claire will provide approximately $10.3 million in additional assistance.

On Tuesday, the City Council voted 10-0 to approve the agreement. (According to the Leader-Telegram, the 11th council member, Roderick Jones, who is a UWEC employee, abstained from the vote.)

Another view of the proposed Sonnentag Center.

Construction on the 170,500-square-foot Sonnentag Center is expected to begin next spring, the university says. The multipurpose facility will cost an estimated $85.6 million, while Mayo Clinic Health System plans to build a $15 million clinic as part of the complex. The entire project was catalyzed in 2014 when alumni John and Carolyn Sonnentag made a $10 million pledge – which included the property – to the UWEC Foundation. The facility will be built on formerly commercial land between Menomonie Street and the Eau Claire River, near the Hobbs Ice Center and the entrance to Carson Park.

The project is expected to spur additional private development along Menomonie Street, including a hotel to be built by Pablo Properties, which also owns The Lismore in downtown Eau Claire.

The Sonnentag Center is envisioned as a replacement for UWEC’s 70-year-old Zorn Arena. Under the terms of the agreement with the city, it will hold a minimum of 5,000 people (compared with Zorn Arena’s capacity of 3,300), and it will have rigging for concerts and events, will include a 60- to 100-yard field house, will qualify for LEED green building certification, and will be usable by the community as an emergency shelter.

Under the user agreement, the public will be able to use the facility for 15 tournaments or events yearly at guaranteed rates, and the venue must also hold a minimum of 10 community events a year to complement those at the Pablo Center at the Confluence – which was also built as a partnership between the university and the community.

The facility will receive no operational subsidies from the city or other local tax sources, the agreement states.

The funding that will be catalyzed by the agreement with the city comes from a variety of sources, and is contingent on the project reaching specific milestones. Here’s a brief rundown of the figures and their sources:

The city has pledged this much toward the construction cost of the Sonnentag Center. These funds will come from new property taxes generated from the TIF district that encompasses the development area. While the Sonnentag Center itself likely won’t be subject to property taxes, the adjacent Mayo Clinic facility and the Pablo Properties-owned hotel likely will be, said Jay Winzenz, the city’s finance director. The additional property taxes generated by those developments will offset the city’s $5.98 million investment. This figure is further broken down into two categories:

(If the TIF district fails to generate enough new property tax revenue, the agreement includes a clause that requires the Sonnentag Center’s developers  – the Blugold Real Estate Foundation and Eau Claire Community Complex – to pay a payment in lieu of taxes for the life of the district.)

This money will go toward making the facility energy efficient and ensuring it is prepared for emergency use (permitting the center to serve as an emergency shelter if needed). These funds will come from the city’s taxpayer-funded Capital Improvement Plan.

Visit Eau Claire, the city’s tourism promotion agency, will also help fund construction of the Sonnentag Center with the help of a loan from the city. Hotel room taxes that go to Visit Eau Claire will pay off the agency’s $2.4 million pledge, but the city will be responsible for paying approximately $400,000 in interest.

The city plans to spend this amount on infrastructure around the Sonnentag Center to handle increased traffic and public use.

Under the agreement, the developer must apply for a grant of this amount from the state of Wisconsin to pay for a pedestrian underpass on Menomonie Street.

A site plan for the proposed Sonnentag Center.
share
comments 9