We Tried the Culver’s CurderBurger, and It Was as Good as You Imagine CURD IS THE WORD. The Culver's CurderBurger in all its cheesy glory.

It is the stuff that Wisconsin dreams – and April Fool’s Day jokes – are made of: A delicious Culver’s ButterBurger topped with a fried cheese curd as large as the beef patty itself.

Yet it isn’t a dream: It’s real, at least for one glorious day. Call it what you will – a gift from the Sconnie gods, a caloric explosion, something that I probably shouldn’t be eating at 10:30am – but Culver’s calls it the CurderBurger, and it’s available today (Friday, Oct. 15) only.

The curd-centric culinary creation started as an April Fool’s Day joke earlier this year on the Wisconsin-based burger chain’s social media accounts. Then, it was a Photoshopped sandwich that consisted of a single, gargantuan cheese curd on a bun. As the kind of suggestion that seemed plausible enough for a few seconds while scrolling Twitter, the CurderBurger made for a good corporate April Fool’s Day joke. “Wait, is this real?” you were meant to ask, before laughing at the idea’s foolishness and clicking the “like” button.

it’s hard to wrong with a Culver’s Deluxe – the buttered and toasted bun, the juicy beef patty, the refreshing crunch of the dill pickle and onion. Topping it with a savory, salty, crunchy-on-the-outside-gooey-on-the-inside crown of cheese only enhanced the experience.

Curd-crazy Wisconsinites and Culver’s fans, however, saw an opening, and petitioned the restaurant to make the CurderBurger a reality. I suspect the Culver’s folks sensed a buzz marketing opportunity, and a few weeks ago they announced that the CurderBurger would become real for one day only: Oct. 15, a.k.a. National Cheese Curd Day (a “holiday” that Culver’s itself takes credit for creating). A limited number would be available at each Culver’s location.

Tasting an chance for some first-person journalism, this morning my colleague James and I set out for the Culver’s on Brackett Avenue in Eau Claire just after it opened at 10am. I was afraid the restaurant would be overwhelmed, but luckily we missed the lunch rush. There were no signs in the restaurant indicating the CurderBurger was for sale, but the woman at the counter – who wore faux-nerdy “Curdis” spectacles – assured us that it was.

We placed our orders, and I waited for my CurderBurger while siping my Cherry Coke. (No diet soda today; it’s a special occasion!) 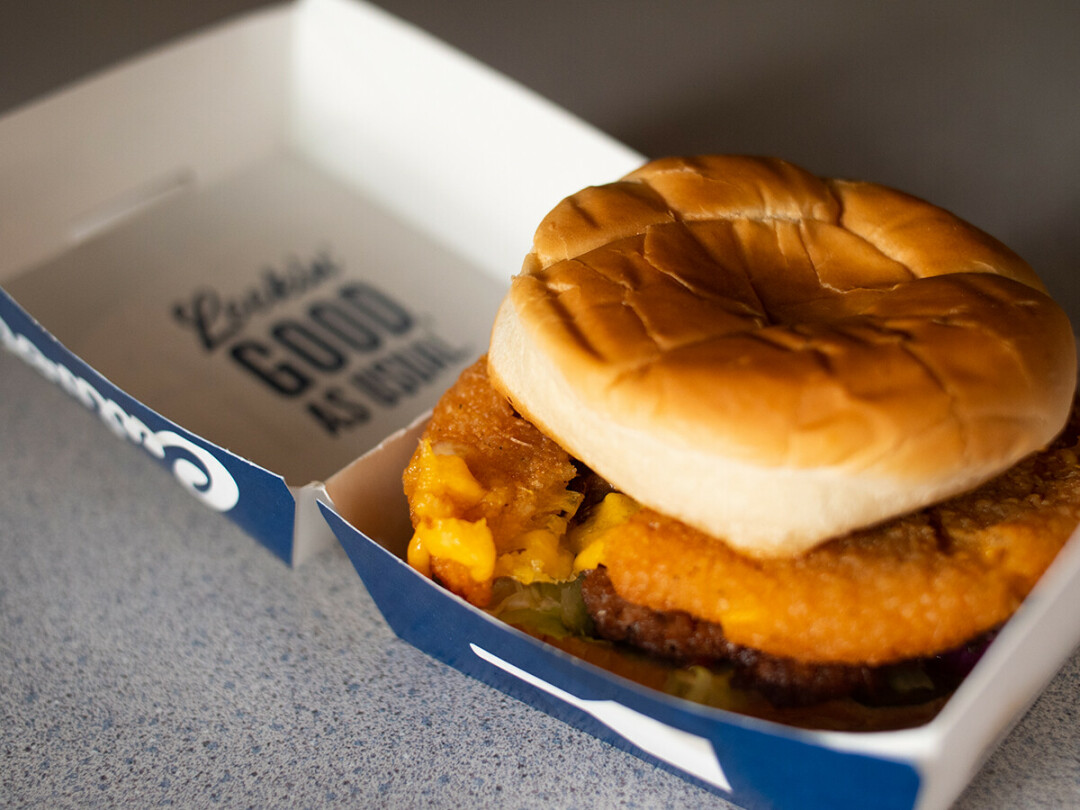 THINKING OUTSIDE THE BOX. The CurderBurger was inspired by an April Fool's Day joke.

So, you ask, how was the sandwich? It was pretty much as I imagined – which, in this case, is a good thing. To begin with, it’s hard to wrong with a Culver’s Deluxe – the buttered and toasted bun, the juicy beef patty, the refreshing crunch of the dill pickle and onion. Topping it with a savory, salty, crunchy-on-the-outside-gooey-on-the-inside crown of cheese only enhanced the experience. (For those tempted to be pedantic, the cheese patty probably wasn’t technically a curd, but it had the taste and texture of one, so we’re going to call it that.)

At first, I worried the giant curd would disintegrate as I ate the burger – curds aren’t meant to be this big – but it held together well, even through a brief photo shoot. Ultimately, it was a satisfying sandwich, something I can imagine could become a popular item if it made its way to the regular menu. (Culver’s, are you listening?)

The only drawback? It isn’t a regular menu item, so if you’re reading this and it’s still Oct. 15, get yourself to a Culver’s quickly. After that, the CurderBurger will live only in our cheesiest dreams.