In the summer of 2018, B.J. Hollars and his six-year-old son, Henry, struck out on the Oregon Trail to “rediscover America” (and learn a little about themselves along the way). The following excerpt from Go West Young Man: A Father and Son Rediscover America on the Oregon Trail (Bison Books, 2021) recounts Hollars’ attempt to better understand the young man with whom he’d hitched his wagon.

If National Lampoon’s Vacation has taught us anything, it’s that nothing bonds (or breaks) a family better than a good, old-fashioned road trip. Yet for America’s nineteenth-century overland emigrants, bonding was beside the point. Reaching their destination safely was the point, and their odds increased mightily once they’d assembled a competent wagon train.

For Henry and me, assembling our train was pretty straightforward: we invited two people, and those people were us. Of course, such an arrangement would have never worked for the westward-bound emigrants, whose wagon trains required members with diversified skill sets.

Which raised the question: what, besides curiosity and a kindly disposition, could Henry bring to our trip?

We had discussed it as a family one morning over French toast.

“What do you mean ‘bring’?” Henry asked.

He reached for the syrup.

“I’m not sure there’s going to be a lot of opportunity for that,” I said. “What else?”

“I mean I can punch robbers,” he clarified.

“You think robbers are going to be a major problem for us?”

“Better safe than sorry,” he shrugged.

“Yeah,” agreed Eleanor, “and you can pour syrup in your cereal!”

(Then she proceeded to prove that she could, too.)

“Let’s keep thinking about it,” I said. “I know you’ve got tons to offer.”

As breakfast wound down and Henry and my wife started in on their daily ritual of searching for lost shoes, lost backpacks, and lost homework, I kept my attention on the question at hand.

What skills could Henry bring on our journey?

I thought back to a trip we’d taken a few years earlier, when 4-year-old Henry had accompanied me to a book festival. It was our first weekend away, and in order to make the most of it, following my reading, we returned to the hotel for a night of revelry. By which I mean we settled in for a night of eating a bucket of ice while watching cable cartoons. We found the cartoons, no problem, but the ice machine was another matter.

We struck out for the hotel ice machine shortly after sunset, wandering the various floors to no avail. Downtrodden as we were, we didn’t give up hope. And our stick-to-itiveness paid off when, a few minutes later, we came upon a stranger holding his own empty ice bucket.

The stranger went one way, and we went the other, and at last – after a lot of backtracking and zigzagging and wrong turns – we eventually found the elusive ice machine in some out-of-the-way nook.

Henry ran toward it, placing the bucket beneath its wide mouth and reveling in the machine’s thunderous churning.

We were halfway back to those cartoons when Henry paused mid-step.

“What about the guy?” he asked.

And so, at Henry’s insistence, we continued wandering the hotel’s corridors.

“You know, he probably found it on his own,” I tried. “In fact, I bet he’s back in his room enjoying a bucket of ice right now.”

Henry wouldn’t hear of it. We’d promised, hadn’t we? And what kind of people would we be if we broke our promise to that ice-loving stranger we’d just met?

As we trudged up a stairwell, I explained that sometimes people just say things with no intention of following through. It’s not a lie, exactly, merely friendly conversation.

“And besides, it’s just ice,” I reminded. “It’s not like we promised him a kidney.”

“There he is!” Henry interrupted.

Sure enough, there was our stranger flagging us down from the opposite end of the hall.

“You guys find it?” he asked, hustling toward us.

Suddenly, we peered into our ice buckets to learn that in the time we spent searching for one another, our ice had melted to water. Thankfully, it was nothing a second visit to the ice machine couldn’t fix.

“Yes!” Henry said as he skipped down the hall, his fresh batch of ice in tow. “We found him!”

We had. And a little melted ice was a small price to pay given what else I’d found that night: my perfect travel companion. Someone to remind me that the wagon train always comes first. 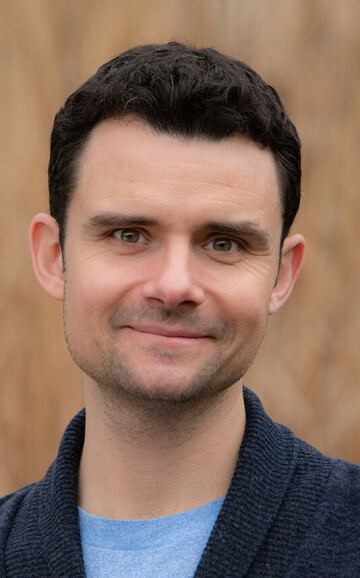 B.J. Hollars is the author of several books, most recently Go West Young Man: A Father and Son Rediscover America on the Oregon Trail. He is an associate professor of English at UW-Eau Claire. His website is bjhollars.com.