Plans call for a 6,000-square-foot, two-story addition to Sojourner House, a shelter for the homeless at 618 S. Barstow St., Eau Claire. (Submitted image)

Construction will begin later this year on a two-story addition to Sojourner House, a downtown Eau Claire facility that provides overnight shelter for people experiencing homelessness.

Earlier this week, the Eau Claire Plan Commission approved a conditional-use permit and a site plan for an addition to the shelter, located at 618 S. Barstow St. The decision had been postponed from a meeting in early August, when several neighbors had raised concerns about the shelter’s expansion.

Under the approved plans, a two-story, 6,000-square-foot addition will be built onto the front of the existing shelter on what is now a small parking lot. About 3,000 square feet of the current one-story building will also be remodeled.

Construction will begin in November and should be completed by late spring or early summer 2022, said Kevin Burch, director of housing services of Catholic Charities of the Diocese of La Crosse, which operates the shelter.

The expansion was prompted by revised guidelines from the U.S. Centers for Disease Control, which recommends that emergency shelters provide at least 6 feet of physical distance between people to slow the spread of infections diseases such as COVID-19. Because of the new guidelines, however, the capacity of the shelter will not increase: It will still be limited to 53 adults overnight, except in times of disaster or extreme weather.

A final price tag for the project hasn’t been determined, Burch said, but some of the funding will come from approximately $1 million in federal grants related to COVID-19 recovery.

Burch said that in addition to expanded sleeping areas, the remodeled building will offer expanded office space for Catholic Charities and its partners, including Lutheran Social Services, allowing them to provide more daytime services for those experiencing homelessness.

Warehousing people is not the answer. It takes a vulnerable population and makes them more vulnerable.

“The goal is to get away from the focus on shelter and really work on the individual and what their life goals are,” Burch said in an interview. While Sojourner House is typically only open from 7pm to 8am, it is also open Monday and Wednesday mornings to provide showers and laundry services, while other services are by appointment only because of the pandemic. Eventually, the facility hopes to be able to offer expanded daytime hours for other services, such as housing counseling.

However, Burch added, Catholic Charities does not have the financial ability or desire to operate a 24-hour-a-day, seven-day-a-week shelter, as some in the community have called for. (In July, Eau Claire developer JCap Real Estate floated the idea of building a 24-hour shelter at Putnam and Wisconsin streets, near Banbury Place.) Catholic Charities and LSS collaborated for a time on such a temporary shelter during the height the pandemic – first at Hobbs Ice Arena and later inside a former grocery store – and Burch said it exposed their guests to more criminal behavior, including drug and sex trafficking.

“Warehousing people is not the answer,” Burch said. “It takes a vulnerable population and makes them more vulnerable.”

On Sept. 7, the Plan Commission approved both the conditional-use permit and the site plan on identical 7-1 votes. Commissioner James Seymour was the sole vote against the measures.

The project was approved under several conditions suggested by both city staff and commission members, including 12-foot decorative fencing in adjacent alleyways, additional lighting, and security cameras. 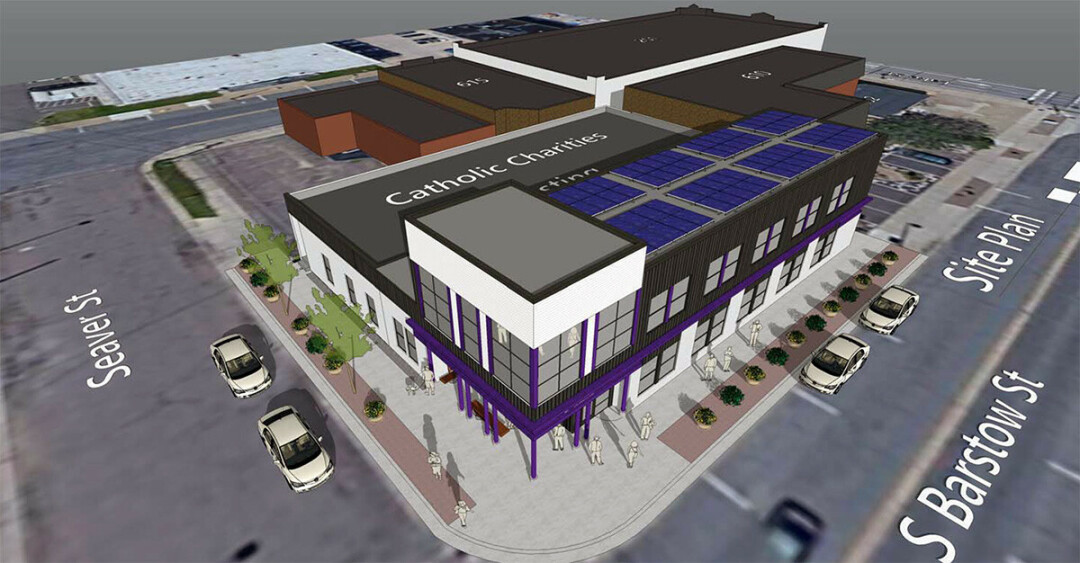 Sojourner House is at the corner of Seaver and South Barstow streets in downtown Eau Claire. (Submitted image)

As they did at the August hearing, several owners of business near the shelter raised objections about the expansion and about the presence of a shelter in a commercial district.

Sheri Baemmert, owner of Prajna Yoga, 705 S. Barstow St., said the shelter was not compatible with the neighborhood, and has attracted drug dealing, loitering, prostitution, and other problems that have impacted neighbors’ livelihoods.

“They know our concerns and the negative effects of having a shelter in a business-zoned district,” she said of Catholic Charities, “(but) they do not have solutions to our issues, nor do they intend to change their business model to make it safe for their neighbors.”

Other community members spoke in favor of the project, including Carrie Poser of Eau Claire – director of Wisconsin Balance of State Continuum of Care, a nonprofit organization that serves as an umbrella for organizations addressing homelessness across most of the state. Power told the commission that if they turned down the expansion plans, the shelter would have to reduce its capacity to ensure it complies with COVID-19 guidelines.

“That means if you deny the permit you’re looking at 21 more people that will be homeless at night,” she said.

Several commission members also spoke in favor of the project and encouraged Catholic Charities to continue a dialogue with neighbors and community members to mitigate concerns.

“I do think that having more space is obviously a way for the shelter to be able to provide services in a better way, in a more dignified way, in a safer way,” said Jeremy Gragert, a Plan Commission member who also serves on the City Council. “I think some of that outreach that has been done – while it is nowhere near complete – things like an advisory committee will help.”