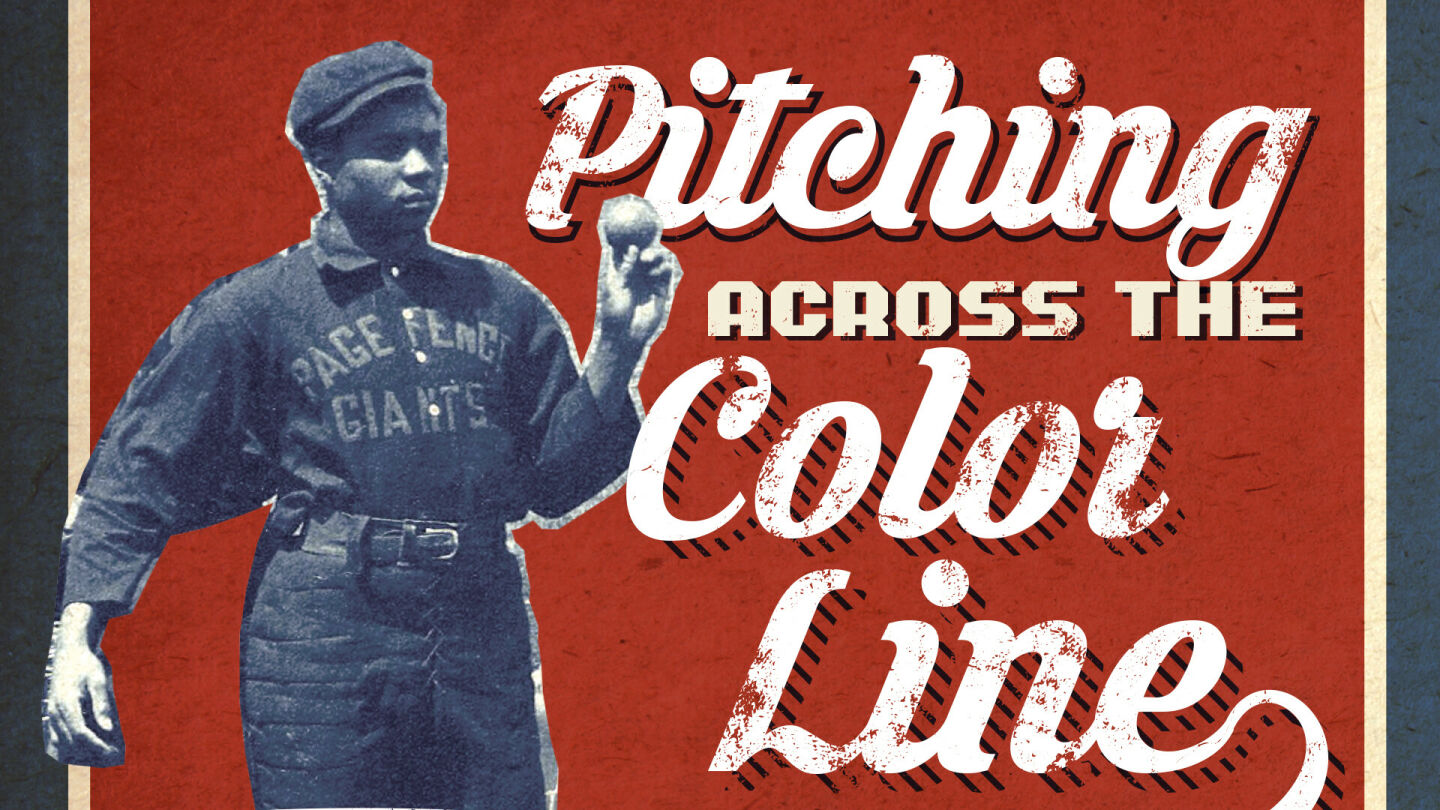 Pitching Across the Color Line

More than a century ago, a Black baseball player was a star in Chippewa Falls, but discrimination kept him from the majors 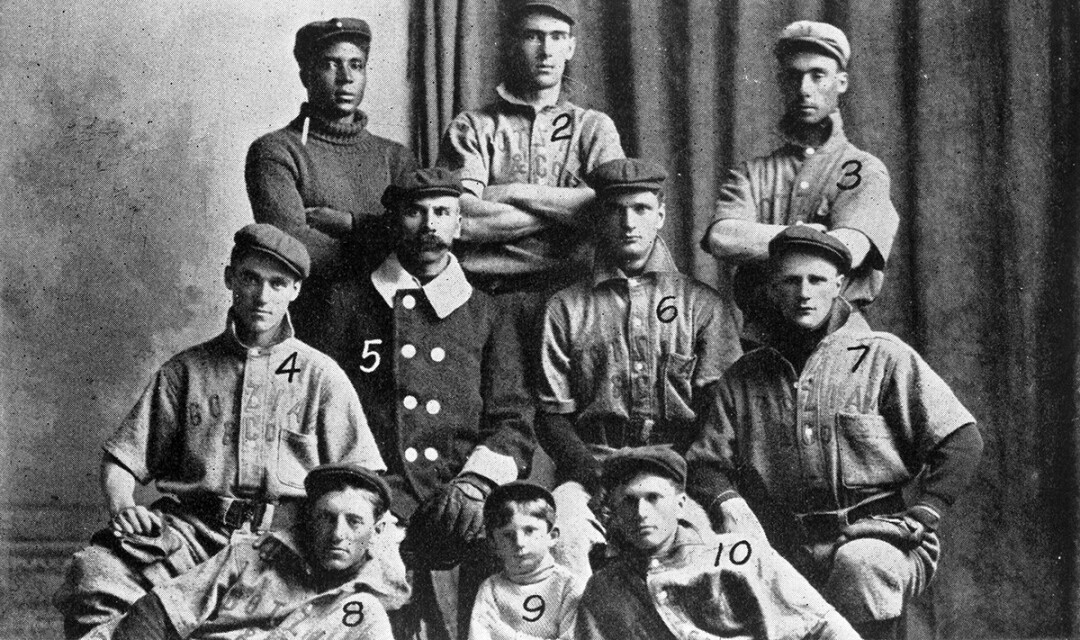 HOME TEAM. The 1904 Chippewa Falls Gotzians. George Wilson is labeled No. 1 at far left in the back row. Player/manager Andy Porter is No. 5 in the middle row. (Photo courtesy of the Chippewa Area History Center)

For more than a dozen years, George Wilson, a native of Palmyra, Michigan, made a name for himself on baseball diamonds all over the upper Midwest – including here in the Chippewa Valley. Regarded by some as one of the best all-around players in the country at the turn of the 20th century, he gained the most notoriety on the pitcher’s mound. Throwing with a quirky, nearly underhand delivery, Wilson’s fastball and assortment of breaking pitchers baffled batters. The only thing holding him back from playing at the major league level was a factor he had no control over: the color of his skin.

It’s common knowledge that Jackie Robinson broke major league baseball’s color barrier in 1947. Of course, people of color had been playing America’s Pastime for decades prior to this seminal moment. Most famously, Black ballplayers had their own circuit due to separate-but-equal laws – the Negro Leagues, which began in the early 1920s (though all-black teams and leagues existed well before then). Additionally, integrated baseball was being played on ball diamonds all over the country for decades prior to Robinson’s breakthrough. George Wilson, who was Black, was one of those players who parlayed baseball into a lucrative livelihood, even if he was kept from reaching the game’s highest level.

Throwing with a quirky, nearly underhand delivery, Wilson’s fastball and assortment of breaking pitchers baffled batters. The only thing holding him back from playing at the major league level was a factor he had no control over: the color of his skin.

In early 1904, Chippewa Falls White Sox player/manager Andy Porter was beginning to worry. Coming off a season that earned the Sox the title of “undisputed champion of Wisconsin” by the St. Paul Appeal, Porter would be without the services of his best player, Billy Williams.1 Likely the first full-time Black ballplayer in the area, Williams was a slick-fielding first baseman with a powerful bat. It would be a tall task to replace a man known to the fans and local press as “Gentleman Bill.”2 Reports of local players of color were sparse at this time, but there are indications that Bud Fowler, regarded as the first Black player to play professionally, reportedly suited up for Chippewa Falls for a game against the Eau Claire Crescents in July 1884.

Porter, a Chippewa Falls native and former minor leaguer, scoured the Midwest for a big-name player to take Williams’ place. In March, he found a replacement who far exceeded his expectations when he signed the great George Wilson. Though on the backend of his career, the left-hander was still playing at a high level. The year before, he won more than 20 games pitching primarily for the St. Cloud (Minnesota) Saints. One of his best outings of the 1903 season came on July 12 against Eau Claire. Not only did Wilson strikeout 17 and allow just two hits in a 13-0 complete game shutout, but he also collected four hits of his own, including a double and home run.

Wilson, the son of former slaves, Jerry and Mary, came of age as a prodigy on the ball fields back in Michigan. He played one year of professional ball. In 1895, he went 29-4 for the Adrian Reformers of the Michigan State League. Because of the laws instituted after the U.S. Supreme Court’s 1896 Plessy vs. Ferguson “separate-but-equal” verdict, baseball owners were able to strengthen their “gentlemen’s agreement,” barring any players of color from playing professionally, making Wilson one of the last Black ballplayers to play at this level until Robinson more than a half century years later. After that, Wilson was relegated to playing for barnstorming and semi-pro teams primarily in Michigan, Minnesota, and then Wisconsin. 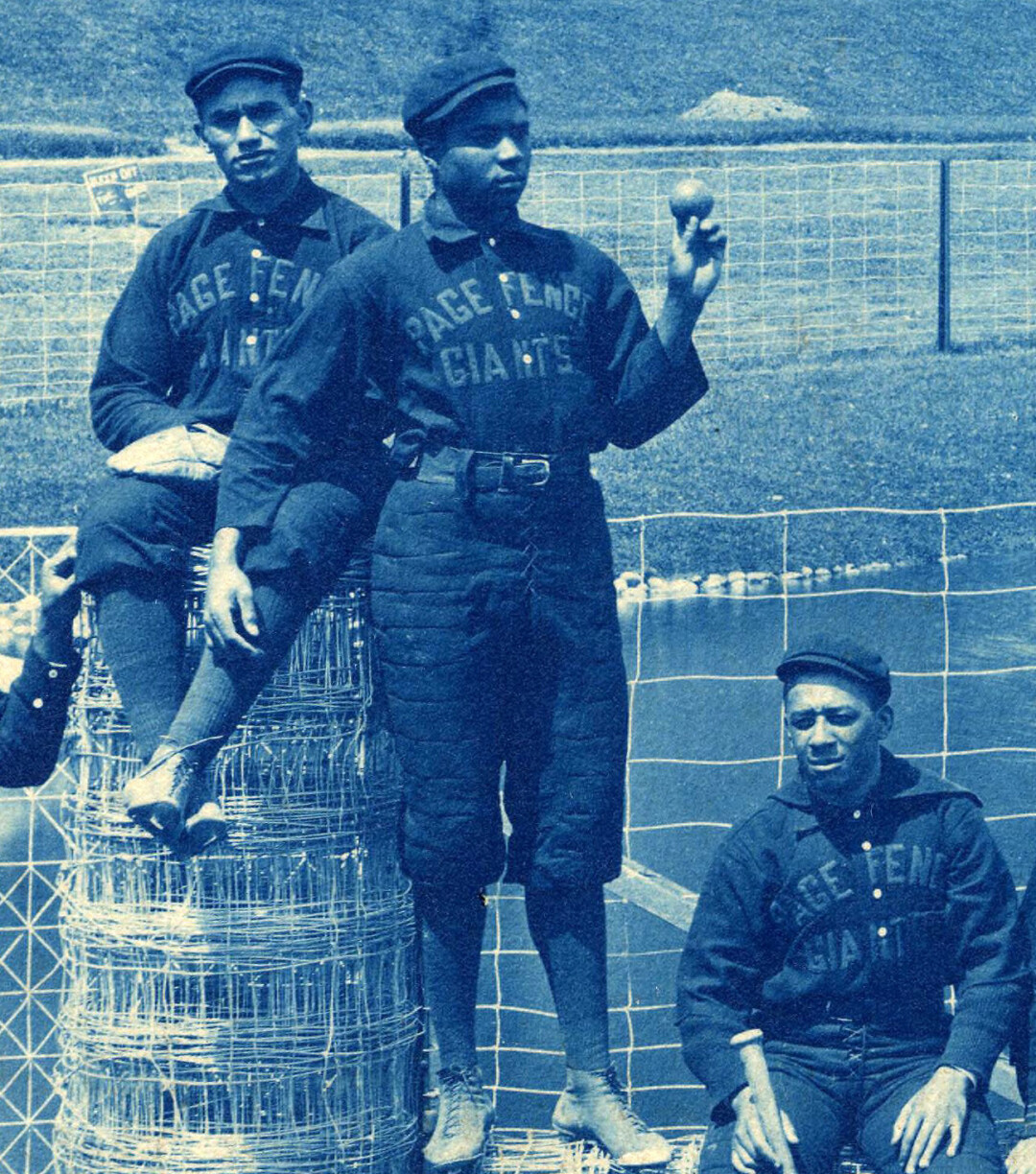 From 1896 to 1898, Wilson played exclusively for the Page Fence Giants, an all-Black ball team that traveled the Midwest in their own swank railroad touring car. He was the club’s best pitcher, helping lead the Giants to a 125-12 record in 1897, including 82 consecutive wins. In 1899, Wilson and several of his teammates migrated to Chicago to play for the Columbia Giants. He then moved onto Minnesota, starring first for the Waseca EAOC Millers from 1900-02 and then St. Cloud in ’03, before signing with Chippewa Falls in ’04. Wilson’s talent – and skin color – were a draw whenever and wherever he took the field. This resulted in him squeezing in games as a hired arm for teams all over the state in the one-and-a-half seasons he spent with Chippewa Falls. Known cities he suited up for included Eau Claire, Hudson, River Falls, Marshfield, Black River Falls, and Sturgeon Bay, just to name a few.

Throughout the years, Wilson remained on the radar of those in professional baseball. Luminaries such as Connie Mack of the Philadelphia Athletics and John McGraw of the New York Giants wondered what it would be like to have Wilson in uniform. Even the notoriously tight-fisted Charles Comiskey, owner of the Chicago White Sox, opined that he would “give a fortune for Wilson if he were white an eligible to play in league baseball.”3

On May 1, 1904, in front of 1,200 spectators – described as by far the largest crowd to ever witness a game in Chippewa Falls – Wilson took the mound against rival Eau Claire at the Southside Athletic Park. Though protested by local citizens because it was played on a Sunday, the game went on. The White Sox jumped out to a 1-0 lead after one inning, but Wilson was wild, walking seven and allowing a 3-1 Eau Claire victory. The Eau Claire ball club – which went without a nickname – ended up being not only one of Chippewa Falls’ toughest opponents during the 1904 season, but arguably one of the few teams Wilson had the most difficulty with in his entire career.

Even the notoriously tight-fisted Charles Comiskey, owner of the Chicago White Sox, opined that he would “give a fortune for Wilson if he were white an eligible to play in league baseball.”

Wilson helped the White Sox win the rest of their games in May, including a 13-9 victory in front of 2,200 at Eau Claire’s new ball diamond at the Driving Park. Wilson picked up the win in the wild contest. Chippewa Falls’ successful May caught the attention of management at the C. Gotzian Shoe Co., which had recently opened a factory in the city. An offer to sponsor the team was made and accepted, making the Chippewa Falls White Sox the Chippewa Falls Gotzians. Now adorned in uniforms with “Gotzian & Co.” sprawled across the front, the team continued its run. Wilson was starting to show his prowess. He beat two of the top teams in St. Paul – the capital city’s version of the Gotzians, 8-1, and West Publishing, 10-0. In the latter contest, Wilson disposed of the team in an hour and 10 minutes, throwing a perfect game that included 16 strikeouts.

The Gotzians played the majority of their contests at home, but in July they set out on an extended road trip to Minnesota – something that had never been done before by a city team. With several new players and Wilson headlining, Chippewa Falls went 4-2 against an up-and-coming integrated team from the small southwestern Minnesota town of Renville, known as the All-Stars. The Gotzians returned to Chippewa Falls with a new rivalry, a handful of victories, and a few gifts – including a badger. 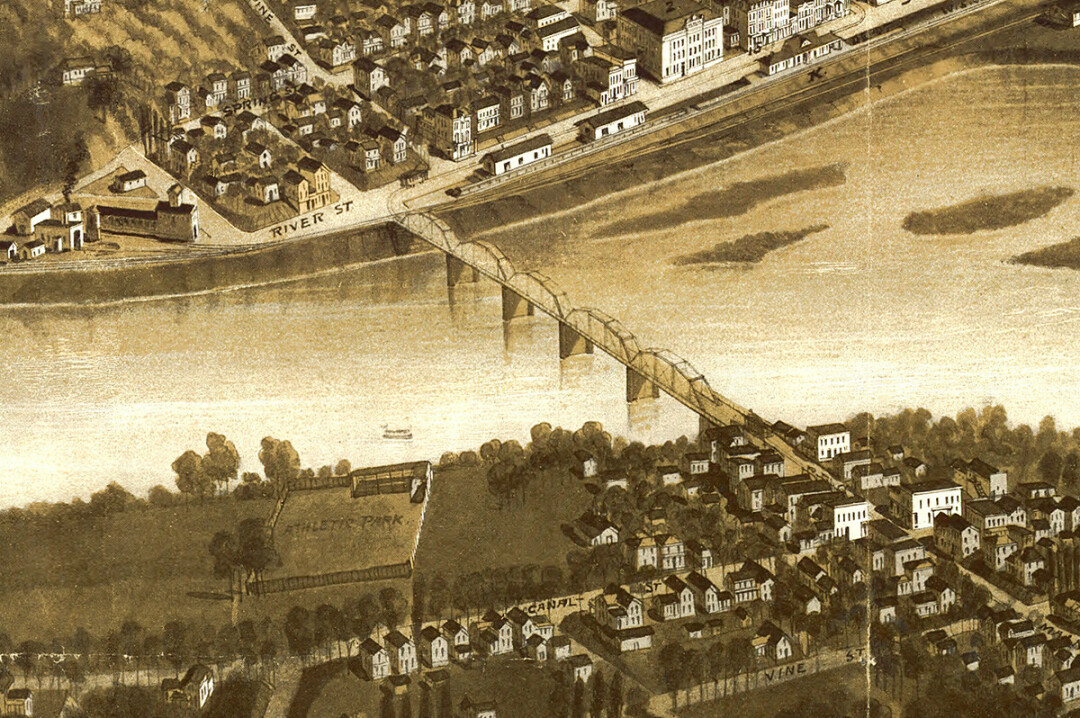 FIELD OF DREAMS. This close-up from a 1907 map of Chippewa Falls shows the South Side Athletic Field along Canal Street in the foreground. The site is now near the Chippewa Falls Municipal Maintenance Facility. (Courtesy of the Library of Congress)

The Gotzians finally handled Eau Claire, beating them twice in a four-day period, with Wilson tallying both victories, but the rivalry with Renville was taking precedence over the Chippewa Falls-Eau Claire dynamic. Following a series of games in early August, Chippewa Falls and Renville decided to play a game billed as the “Minnesota and Wisconsin Championship.” On Sunday, Aug. 16, a crowd of 2,200 congregated at Minneapolis’ Lexington Park to see the two teams play. Wilson was in command, striking out 17 and allowing just two hits in the Gotzians 10-2 win.

Chippewa Falls finished the season with a 38-13 record, outscoring their opponents 278-157. Unfortunately, statistical newspaper accounts of the season were sparse, but it can be tallied that Wilson won in excess of 20 games and was the offensive leader from the clean-up slot. The East coast Spalding Athletic Company, which published a yearly Baseball Guide, decided to dedicate an entire issue to the Twin Cities metro area and beyond:Spalding’s Minneapolis St. Paul Amateur Base Ball Yearbook, 1905. Amateur and semi-pro teams from Minnesota and surrounding states were highlighted within. Atop the Wisconsin teams were the Gotzians, who Spalding’s declared “won without question the title of the champion independent base ball team of Wisconsin.”4

Wilson returned to Chippewa Falls in 1905, but the season was a disaster from the start. He was his usual dominant self, winning several games, but financial issues and poor weather led him to leave the team for the Renville All-Stars in early July. The loss of a ballplayer of that caliber was felt throughout the Chippewa Valley. The Eau Claire Leader reported that, “A Chippewa Falls baseball team without Geo. Wilson the cerebral colored pitcher, to many would be something like Hamlet with Hamlet left out.”5 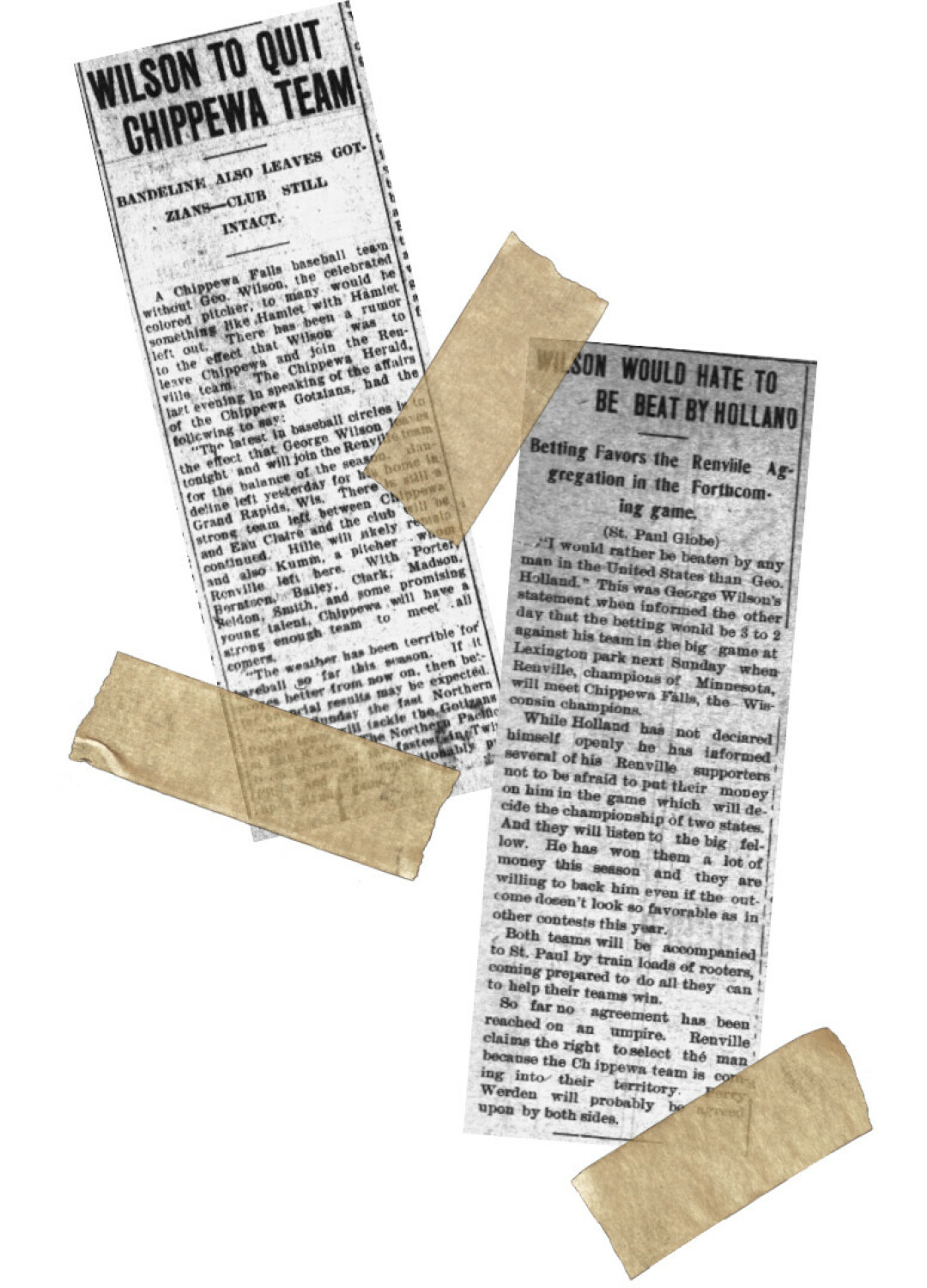 HEADLINE NEWS. Two of many newspaper articles published about George Wilson during his baseball career, these were printed circa 1904-05 in the Eau Claire Leader-Telegram.

There were hopes that Wilson would return to Chippewa Falls in 1906, but those were dashed when local focus moved to a Chippewa Falls and Eau Claire co-opted team in the Wisconsin State League. Wilson went on to have success in the newly formed Lakeshore League in the southern part of the state, first for Sheboygan (1906), and then Manitowoc (1907-08). His playing career was shortened after he was hit in the head by a ball while playing in a Cuban Winter League in early 1907. He began suffering headaches and acting erratically.

Wilson, who never married, moved back to Michigan towards the end of the decade. He took up work as a farmer, but still played occasionally for local teams. His behavior worsened, ending with an incident that saw him institutionalized in 1914. He was dead within months at age 40, with the death being deemed “general paresis.”

Posthumously, Wilson was remembered by those who saw and played against him, commonly mentioning that he had all it took to make it – and flourish – at the major league level. Finally, in the early 2000s, the National Baseball Hall of Fame and Museum received a grant to look back on this era of the game to compile a list of candidates for Hall of Fame enshrinement. Wilson was among the 94, and though he ultimately wasn’t named to the Hall, being included on the list can be considered validation for his career on the field.

2. Williams returned to his home in Minnesota, where in addition to playing baseball for years, joined the staff of Minnesota Governor George A. Johnson as a personal assistant. He remained in the that position for 53 years, assisting 14 governors.