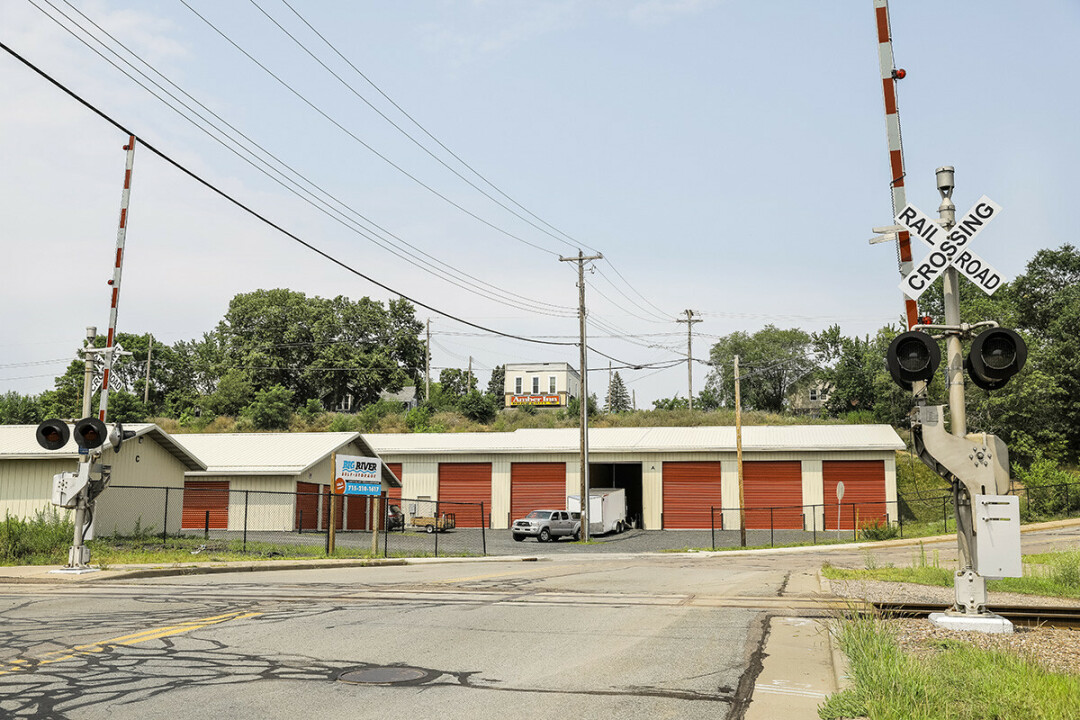 SOMETHING IN STORE? Eau Claire developer JCap has proposed replacing this mini-storage site near Banbury Place with a 24-hour shelter for the homeless, which would also house social service agencies.

An Eau Claire developer is proposing a building that would provide shelter for homeless people day and night along with space for agencies that work with that population, a project designed to fill service gaps as the number of people without homes rises and their impact on the city’s downtown grows.

The plan by Eau Claire developer JCap Real Estate calls for constructing a building on property the company owns at the corner of Putnam and Wisconsin streets, near Banbury Place just north of downtown. The building would provide space for 24/7 shelter and various agencies that serve homeless residents, allowing them to more directly be linked to services they need. Plans for such a building are preliminary, but the site – which is currently occupied by self-storage units – also could include supportive housing and possibly affordable housing units.

“We think we have a great site next to The Community Table that would work for a building that would help better serve homeless people,” JCap owner Brian Johnson said. “Right now a lot of people are talking about homelessness in Eau Claire, and we want to do something to help address it.”

The plan calls for JCap building the shelter and leasing it to organizations that would be housed there. Johnson said the plan is too preliminary for cost estimates. An architectural sketch shows 130 beds on one level, but the building could expand to include three stories. JCap plans to seek American Rescue Plan Act (ARPA) funds from the City of Eau Claire and Eau Claire County to help pay for the project. 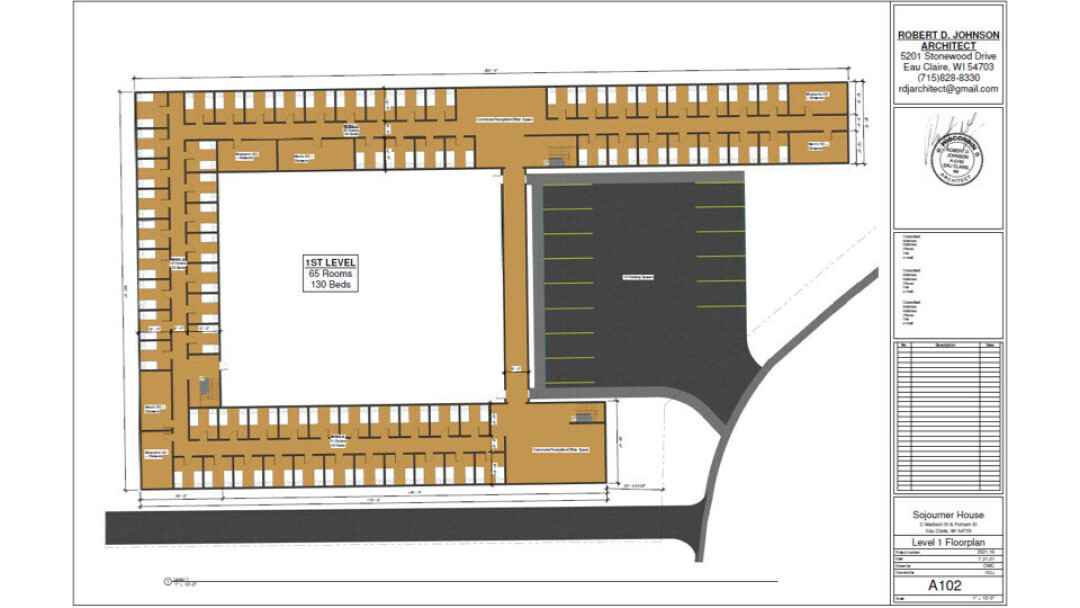 Right now a lot of people are talking about homelessness in Eau Claire, and we want to do something to help address it.

As part of that plan, Johnson said he hopes the Sojourner House homeless shelter, 618 S. Barstow St., would relocate to the new site.

The proposal comes amid growing concerns among business owners and others about what seems to be a growing number of homeless people downtown. With the discontinuation of the Positive Avenues day shelter and the temporary closure of L.E. Phillips Memorial Public Library for remodeling, more homeless people have no indoor space to spend their days in. The June 16 death of Marilyn Roeber, a homeless woman who died after spending three consecutive days on a bench along South Barstow Street, further increased the visibility of homelessness in Eau Claire and has prompted questions about what can be done to address it.

At a meeting Thursday night sponsored by Downtown Eau Claire Inc., downtown business owners discussed their concerns about illicit behaviors by some homeless people scaring away some of their patrons. Alex Padrnos, director of development for JCap – which is building the Wilson Square apartment complex just east of Sojourner House – said the company receives numerous complaints about the behaviors of homeless people downtown.

“It’s a serious problem,” he said. “We receive complaints frequently. A lot of downtown businesses are concerned.”

Many questions remain about JCap’s proposal, chief among them whether the operator of the Sojourner House, Catholic Charities of the Diocese of La Crosse, is on board with the idea. A remodeling of Sojourner House estimated to cost about $2 million has already been planned, and the Eau Claire Plan Commission is scheduled to discuss a conditional use permit necessary for the project to proceed at its meeting on Monday, Aug. 2.

Kevin Burch, director of housing services for Catholic Charities, said while he generally supports the concept of a 24/7 shelter with daytime services that link homeless residents to help they need, JCap’s proposal may be too close to the current plan to remodel Sojourner House to make a relocation in the near future feasible.

“I would never rule this out,” Burch said, “but I feel like they’re coming in at the 11th hour in terms of where we’re at with the timeline of our project. A project like what they’re describing, I think it takes lots of planning to get all of the agencies on board and committed.”

Catholic Charities, which operates the Sojourner House shelter at 618 S. Barstow St. in Eau Claire, has already proposed a 6,000-square-foot addition. However, this would not increase the capacity of the shelter – only increase the space per occupant. (Submitted image)

Much of the money for the Sojourner remodel comes from coronavirus relief funding, Burch said, and its use is restricted to remodeling, meaning it can’t be used for new construction. The Sojourner project won’t increase capacity above the 53-person limit allowed there, but will add space so people there can be more socially distanced. The renovation also will include locations to increase opportunities for such services as job training for homeless people, he said.

Burch questioned the cost of relocating Sojourner House. Catholic Charities owns the building that houses the shelter and doesn’t make payments there, he said, so a move elsewhere would mean increased operating expenses. He expressed concern about possibly mixing homeless people, transitional housing, and affordable housing at one location and said keeping a large group of people experiencing struggles together often isn’t effective and can lead to problems.

“I just don’t know that putting all of those people together in one spot is the best model,” he said.

“I would never rule this out. but I feel like they’re coming in at the 11th hour in terms of where we’re at with the timeline of our project.”

Anna Cardarella, chief executive officer for Western Dairyland Economic Opportunity Council, which also serves homeless residents, said while she likes the concept of day and night shelters in one location, she opposes having so many homeless people at one site. Like Burch, she said she supports scattered site housing, in which people who were homeless are housed at different sites. Federal regulations currently support the scattered model, she said.

“You don’t put all of our chronically homeless people together in one building without expecting problems,” she said.

Cardarella and other officials of agencies that serve homeless people said they need to know more about the cost of renting space at the proposed site before they can get behind it. Some pointed to uncertainties about who would oversee a new shelter’s operations.

Others who work with the city’s homeless said they understand those concerns and have some of the same questions. However, they said, the JCap proposal represents too big of an opportunity to not discuss it further. The chance to access federal ARPA funds to supplement JCap’s investment could substantially improve programming for the region’s homeless, they said. The city will distribute about $13 million in ARPA funds; the county about $20 million. 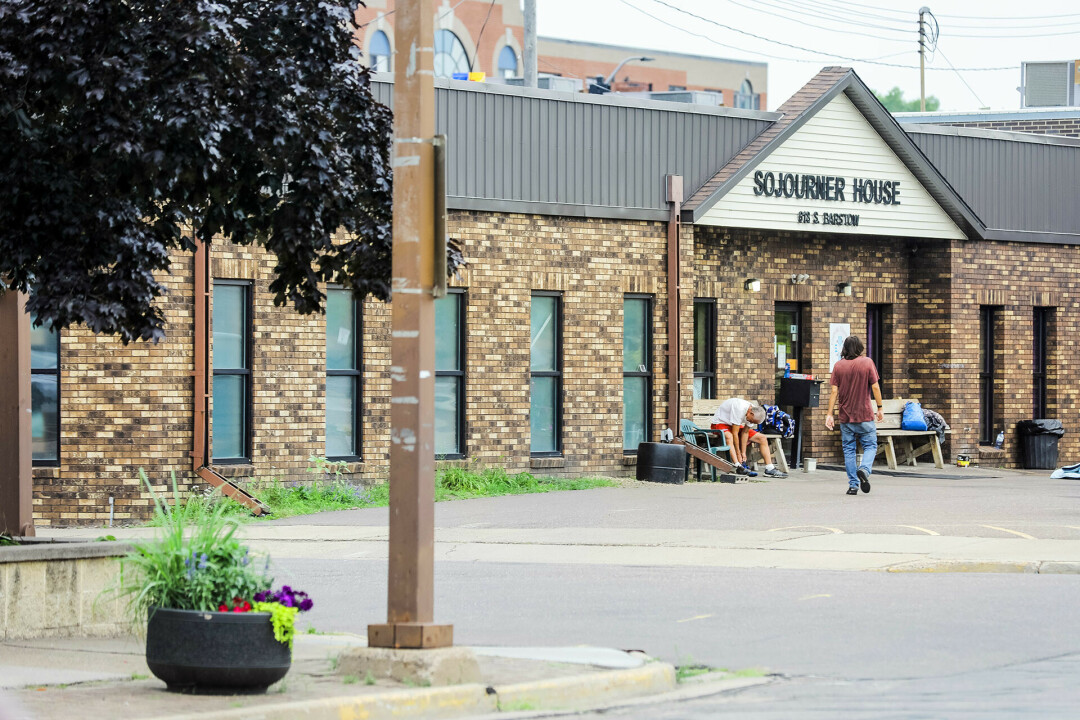 Sojourner House is an overnight shelter for people without homes in downtown Eau Claire.

TJ Atkins, executive director of The Community Table, which serves daily meals to people in need, acknowledged the complex challenges homelessness poses and said many questions remain about the proposal, including which services must be provided there to best close existing gaps.

But she said she sees JCap’s idea as a chance to discuss better serving people who lack housing, although that will only happen if the many groups involved in that endeavor can come together.

“I feel it is a pivotal opportunity that the community needs to seize now before it passes,” Atkins said. “We have an opportunity to change the tide and get ahead of the issues, but it can only happen if we do it together.”

Susan Wolfgram, co-chair of the JONAH Affordable Housing Task Force and a Plan Commission member, has worked with Padrnos on previous housing projects. Given existing gaps in homeless services, she hopes the community can back the concept of the proposal and discuss it further to see if some version of it is possible.

“We have been advocating for a 24-hour ‘one-stop shop’ model of shelter/services/transitional-supportive housing for three years,” Wolfgram said. “The plan JCap is proposing is golden and needs to be taken seriously by our nonprofit community that serves this most vulnerable population.”

“Homelessness is so complex. Half of the job here is to get the building. But the real work is going to be getting the resources and figuring out how best to meet the needs of the people who are in the shelter. There’s an awful lot of collaboration that has to occur.”

The proposal could lead to new collaborations between agencies that serve homeless people and lead to better outcomes for them, said Judi Moseley, who chairs the affordable housing task force with Wolfgram. She urged those working on new approaches to homelessness to “think big.”

“I believe this is a once-in-a-generation chance to make a lasting impact on our community, and requires that we all work together to find new ways to serve all of our neighbors, even the most vulnerable,” Moseley said.

As a doctor who helped start the Chippewa Valley Free Clinic that provides medical care to people who otherwise couldn’t afford it, Ken Adler has become familiar with the needs of people who struggle financially. Seven years ago he got more involved with Eau Claire’s homeless and has worked on various efforts to help them since.

After watching homeless people struggle, Adler is excited at the prospect of the improved services a 24/7 shelter with providers on site could provide. He sees the ARPA funds as a “once in a long time opportunity” to substantially improve the system that serves people without homes.

But Adler has heard promising plans before, only to see them falter in the face of limited resources and interagency struggles. He hopes this time is different.

“Homelessness is so complex,” he said. “Half of the job here is to get the building. But the real work is going to be getting the resources and figuring out how best to meet the needs of the people who are in the shelter. There’s an awful lot of collaboration that has to occur.”

Moseley said she believes that can happen. Similar models in locations such as Madison, Milwaukee, and Green Bay have had successes, she said, and the same can occur here.

“We have an enormous pool of talent and compassion in our community, and we can make this happen in the Chippewa Valley,” Moseley said.

You can explore Volume One’s recent feature package about the issue of homelessness, “No Place to Call Home,” on our website.