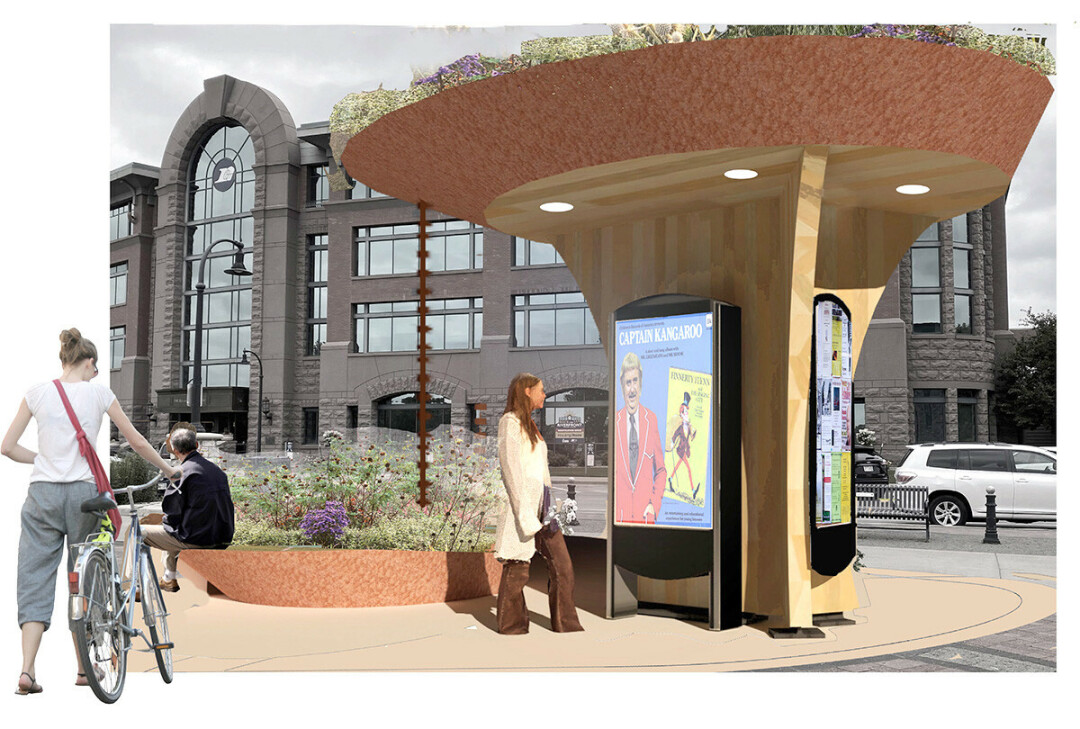 A digital-screen kiosk slated to be installed near the Phoenix Park end of the Haymarket Plaza pedestrian bridge will provide more than information about downtown events and attractions.

The wooden structure – which will be designed and built by two Eau Claire artisans – will offer shade and seating for passersby. It will provide space for an array of colorful flowering plants. It will also serve as a environmentally friendly work of art, reflecting the elliptical shapes found in both Phoenix Park and just across the Eau Claire River in Haymarket Plaza.

Dubbed “Two Ellipses,” the kiosk is the brainchild of Tim Brudnicki and Joe Maurer, who are working together under the name Timber Space Eau Claire. Brudnicki is an artist and woodworker known for creating beautiful, functional works from upcycled urban wood. Maurer is a painter and landscape architect whose local projects have included the Forest Street Community Garden and Beaver Creek’s new Butterfly Pavilion.

It’s a place of arrival across the bridge. (I hope) it helps them explore this place, this context.

The project – which recently received a recommendation from the city Waterways and Parks Commission but still requires approval from the Eau Claire City Council – will be entirely funded by downtown businesses through the North Barstow/Medical Business Improvement District. If all proceeds as planned, it could be installed by this fall, its creators say.

“Essentially it’s using a lot of the urban wood that I get to form a basic three-sided structure,” Brudnicki said. “The top of it is a roof garden that runs down to a second (level) that’s a sort of a bench.”

The three-sided main structure will provide shade and will include a large LED screen that features digital information on one side and static information boards on the other two sides. While final decisions about materials haven’t been made, Brudnicki said the structure will most likely be composed from ash, white oak, and locust – the latter two of which are particularly good for outdoor use. 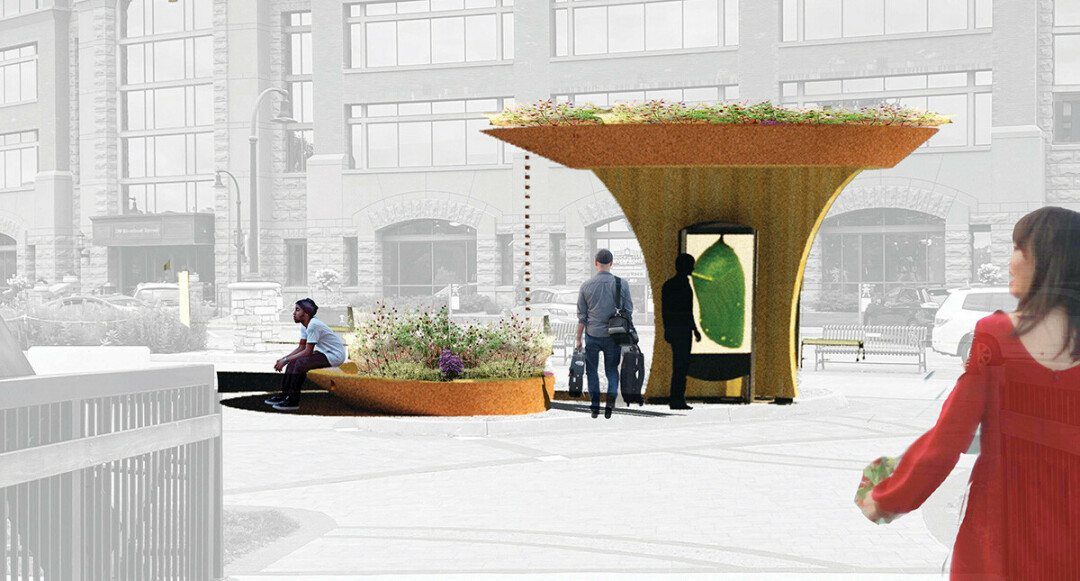 Maurer, who holds a master’s degree in landscape architecture from the University of Pennsylvania, said the kiosk’s roof will be planted with alpine species that thrive in shallow soil. The roof will be connected by a “rain chain” to the lower tier, which will feature a pollinator garden that will pop with changing seasonal colors.

Maurer says he hopes visitors are drawn to the piece. “It’s a place of arrival across the bridge,” he explained. “(I hope) it helps them explore this place, this context.”

Members of the North Barstow/Medical Business Improvement District, or BID, have wanted to install a digital kiosk downtown for a while, and they determined an ideal spot in Phoenix Park, said Aaron White, the city’s economic development manager. The BID, which is self-funded by downtown business, approached Brudnicki and Maurer to solicit ideas for the project. The artisans credit Julia Johnson of Pablo Properties, chairperson of the BID, with spearheading the effort.

White said the BID has allocated up to $90,000 for the project, but the cost will probably be closer to $75,000. This includes $25,000 for the necessary technology, including the LED Smart City Kiosk and the software needed to operate it.

In the past, the North Barstow BID and similar organizations representing other neighborhoods have used their funds to add elements such as banners, benches, and bike racks to the downtown. “This is definitely a unique amenity that they are bringing into the district,” White said of the kiosk.

The project isn’t the first collaboration between Brudnicki and Maurer. They’ve also created a dome-shaped wooden shelter dubbed the Street Beetle, which is scheduled to be installed in the coming months outside the new Flesch Family Welcome Center at UW-Eau Claire. This vehicle-sized pod, made of ash wood, will be able to seat five people on a curved bench.

Brudnicki said both projects have pushed him creatively. “It’s new ground, and a way that I see to stretch out artistically a little bit,” he said.