get outside and play a good ol’ game of one-on-one or three-on-three basketball, thanks to one local enthusiast 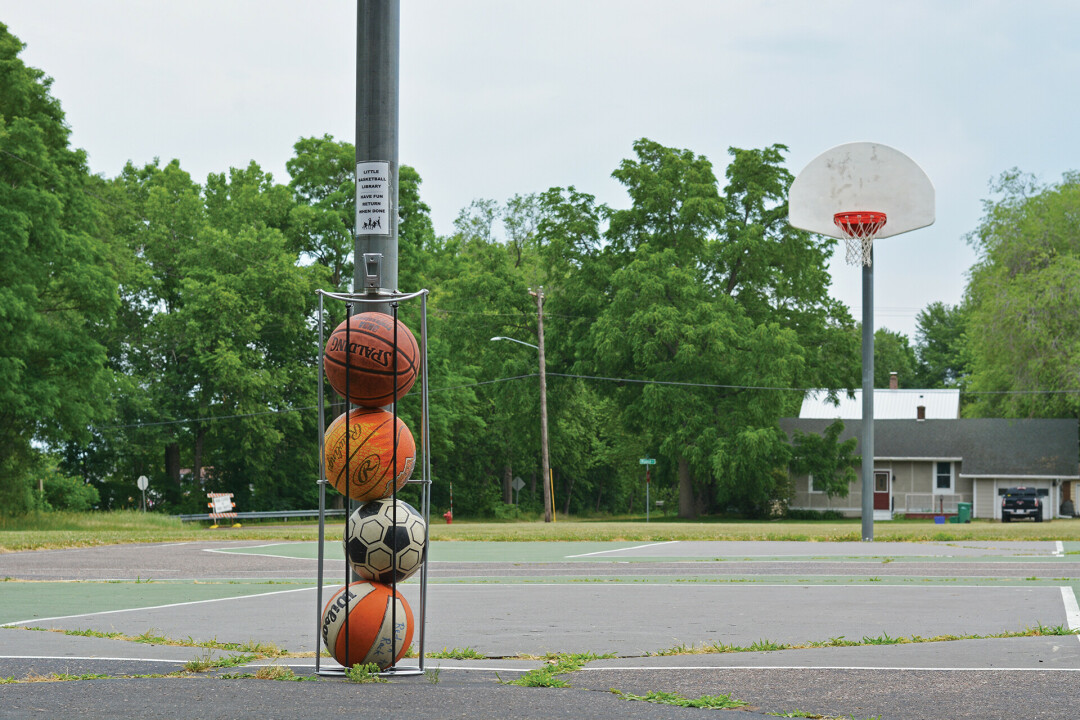 PLAY BALL! Little Free Basketball Libraries have appeared in several Eau Claire Parks, thanks to one basketball enthusiast who aims to make playing sports an option for all local kiddos. (Photo by Rebecca Mennecke)

And by "library," we mean a wire basket filled with four to five basketballs, with a sign above that reads: Little Basketball Library. Have fun! Return when done.

By day, Tom Regez – the man responsible for the basketball libraries – is a controller at Menard’s. But, by night, Regez uses his own money to buy and install the wire baskets and basketballs in an effort to encourage local folks to get outside and play.

They encourage people to get outdoors, walk around, with their dogs or not, and meet their neighbors. In turn, this creates communication and connection.

“It got me thinking about what else could be done,” Regez said of the sled library. “With all the basketball courts at our local parks and having played in basketball leagues myself every year from age 10 to 48, I felt the basketball library could work… I also have fond memories of getting a basketball as a gift from my folks and shooting hoops outside for hours, and thought others might not be so fortunate to have a ball available.”

Regez hopes that people of all ages embrace the idea, head outside for some exercise, breathe in the fresh air, work on their mid-range jump shot, dribble around, play a game of Horse or Around the World, and – if they’re feeling extra competitive – play a game of good ol’ one-on-one or three-on-three basketball.

“We encourage everyone to get outside,” said Steve Plaza, the parks, forestry, cemetery, building, and grounds manager for the City of Eau Claire, who actively supports the project, “and get involved in actively engaging in physical and healthy activities in our parks, playgrounds, and sports fields.”

Regez hopes the Little Free Basketball Libraries have a positive impact locally. “Hopefully the community jumps on board to help if they ever see an empty rack that needs a ball,” he said, “or if they want to add a basketball library at a park or city near them.”

Rowekamp – an advocate of Little Free Libraries who has single-handedly built and doubled the number of literary libraries in the East Hill neighborhood – hopes the basketball libraries make for tighter bonds in the community.

“The Little Free Libraries – whether books, sleds, or basketballs – all make a tremendous impact,” Rowekamp said. “They encourage people to get outdoors, walk around, with their dogs or not, and meet their neighbors. In turn, this creates communication and connection. It shows how much all of us are truly alike, and ultimately helps to build trust within our community.”