DOWN BY THE RIVERSIDE. The proposed Galloway Flats development would overlook the Eau Claire River on Eau Claire's far east side. Click here for a closer look. (Submitted image)

An Altoona developer is seeking permission from the City of Eau Claire to build two apartment buildings, as well as single-family and twin homes, on 10 acres just off Galloway Street, overlooking the Eau Claire River.

The city's Waterways and Parks Commission has slated a hearing to discuss the development, dubbed "Galloway Flats," on Wednesday, May 26. RyKey Properties of Altoona is seeking approval for zoning changes and a general development plan for the residential project.

In March, the City Council agreed to sell the 10.3-acre parcel to RyKey Properties for $400,000, pending future zoning approval. If the Waterways and Parks Commission OKs the plan, it will go to the city Plan Commission and then back to the City Council for final approval.

The proposed development is southeast of the intersection of Galloway Street and River Prairie Drive, on the west bank of the Eau Claire River. According to city documents, Galloway Flats would include 79 units: two 24-unit apartment buildings, a four-unit condominium, 18 twin home lots, and nine single-family home lots. 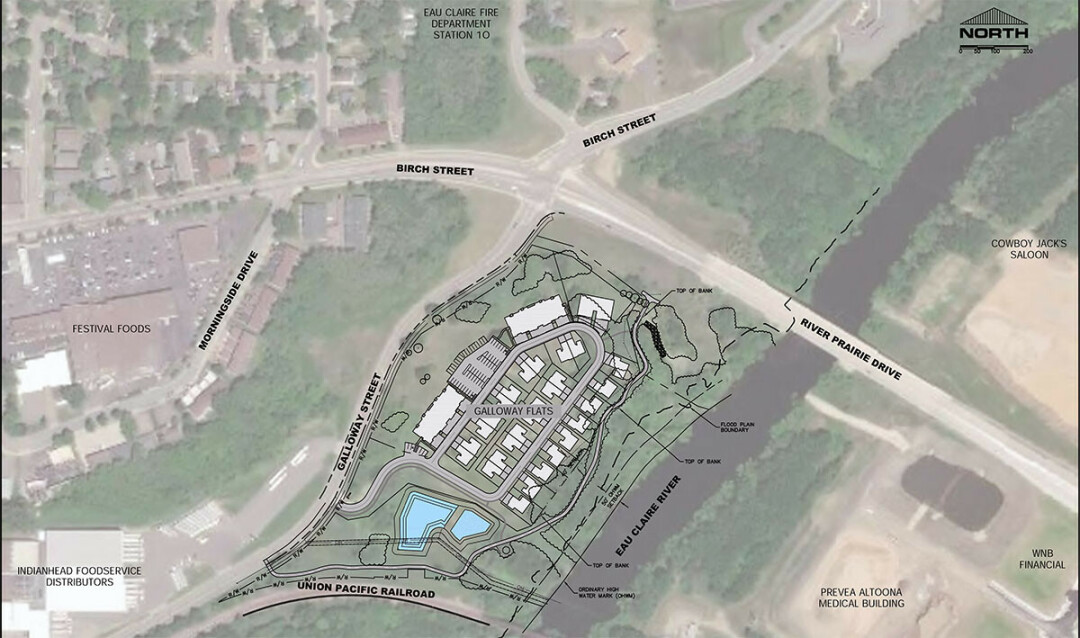 The proposed development would be southeast of the intersection of Galloway Street and River Prairie Drive. (Submitted image)

The undeveloped, partly wooded area was previously used by the city as a snow storage lot, but was declared excess property in 2018. The city would retain 6.5 acres of property between the proposed development and the river. Under the agreement approved by the City Council in March, the developer must build a publicly accessible pedestrian and bike trail through this area along the riverside.

According to documents submitted by the developer, the buildings will be accessed by a looped road that connects to Galloway Street. The single-family homes are envisioned to be 2,200 square feet, and the twin homes will be 1,930 square feet. The pair of 24-unit apartment buildings will be toward the west end of the property, and will offer one-, two-, and three-bedroom designs, as well as attached garages.

Pending city approval, installation of utilities and grading of the site could begin in late summer, with building construction starting in early winter – weather permitting. Completion of all 21 buildings will take up to three years.

Find out more about the project by checking out the PDF of the Waterways and Parks Commission’s May 26 agenda.