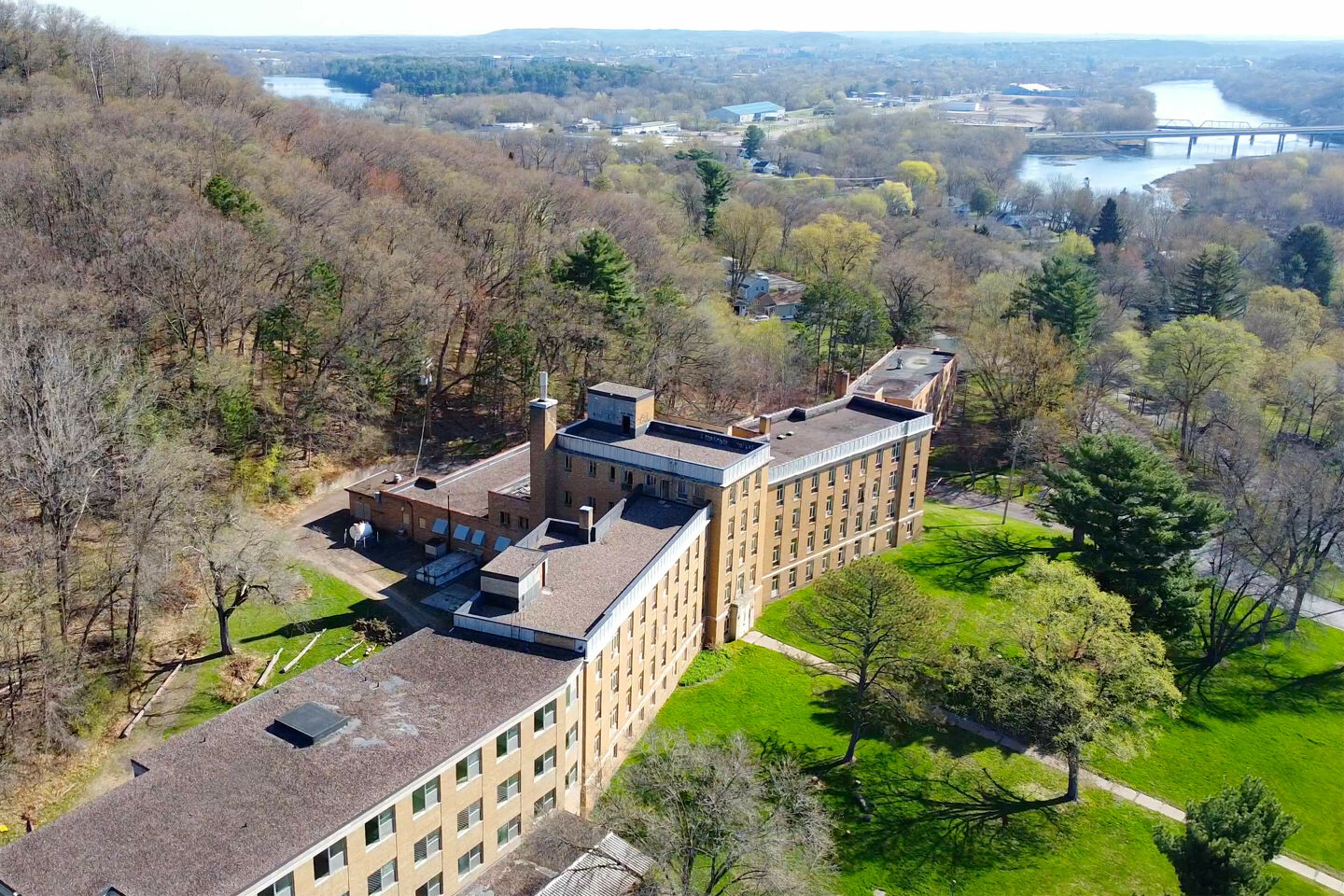 What’s happening in Shawtown has all the elements of a great story. The old Mount Washington Residence – the sprawling, empty four-story building on the hill – is the main character with a sometimes-tragic backstory, hoping for redemption through renovation. The developers are playing the part of determined, against-the-odds idealists. Mix in a little paranormal, a little This-Old-House-style documentation, and an incredible top-floor view, and things really start to get interesting.

Maybe you live in Shawtown. Maybe you drive through it on your way to the Country Jam, Blue Ox, or Eaux Claires music festivals. Maybe you’ve been to the ski jump. Chances are, you’ve driven past this old building, not knowing what it is or what it was. 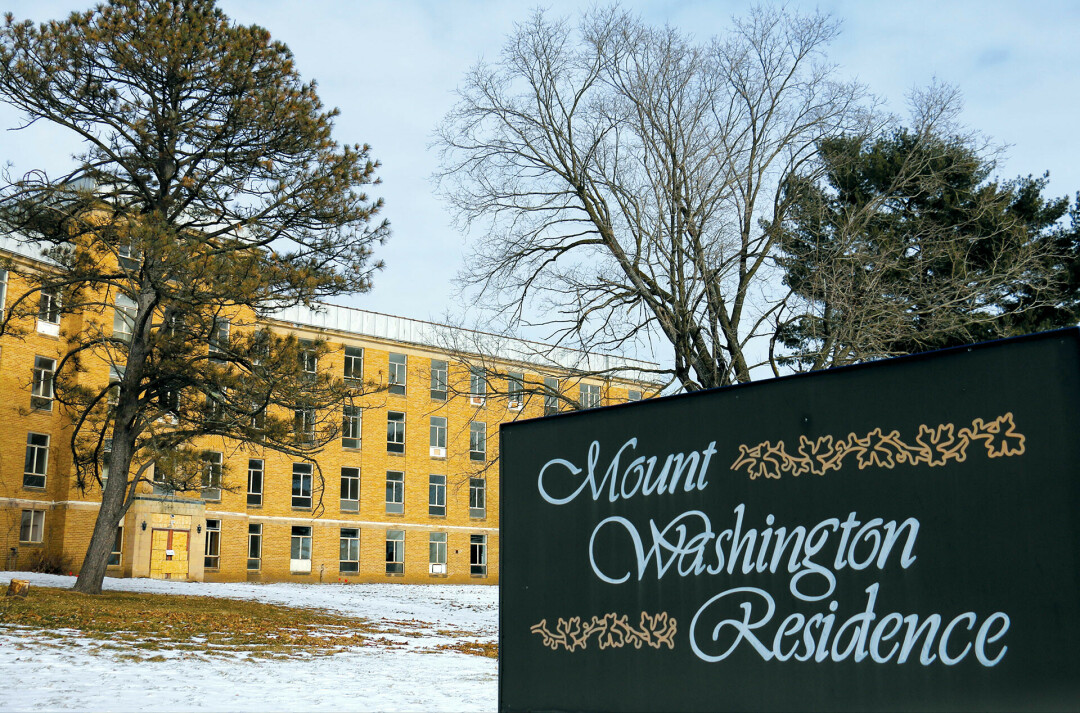 What has been barely a passing thought for most people has become an all-out mission for Ethan Henderson. He and his team are working on restoring what was once Mount Washington Sanatorium and turning it into an apartment complex, complete with a community center, coffee shop, exercise room, mini general store, and top-floor restaurant.

“It’s not a dorm; it’s not a 55-and-over community,” Henderson said. With plans for 65-68 studio and one-bedroom apartments, Henderson hopes to draw a community-minded entrepreneurial clientele and to open the four-story building (with a fifth-floor penthouse) in the summer of 2022. 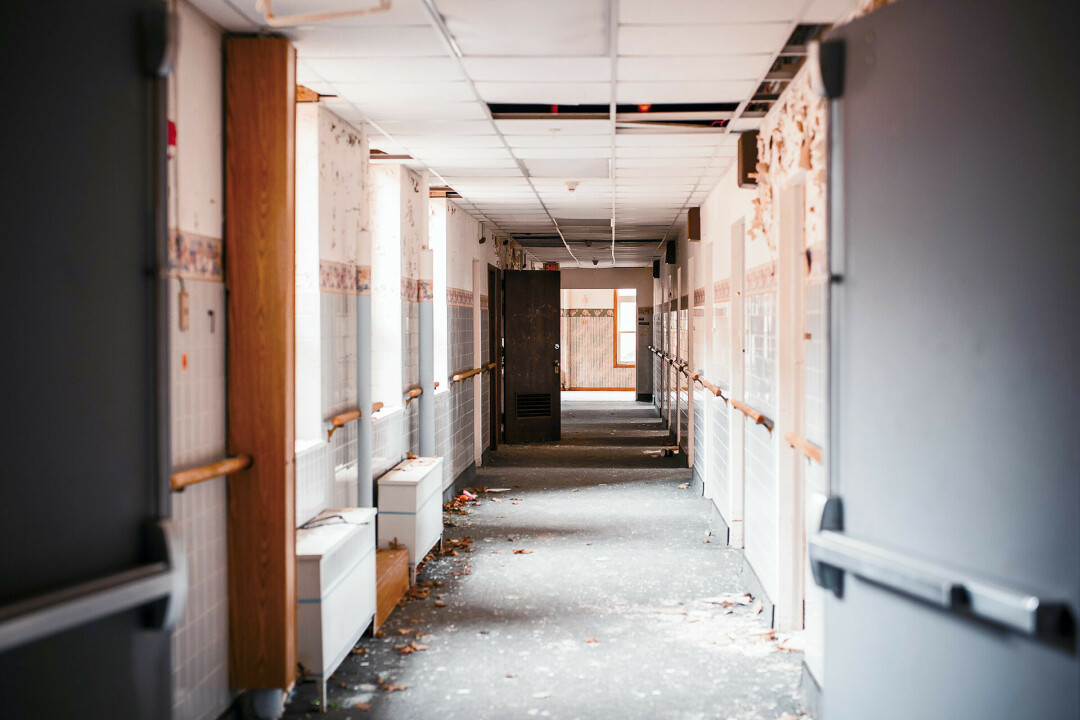 On a cold, February day, Henderson, videographer Levi Otterson, and I walked through the building – a combination of rubble, broken glass, graffiti, beautiful architecture, and remnants of its past lives. Henderson and Otterson see so much potential in a building that most people – except for the vandals, thieves, and ghost hunters – had given up on. Henderson and his team see beyond the disarray. 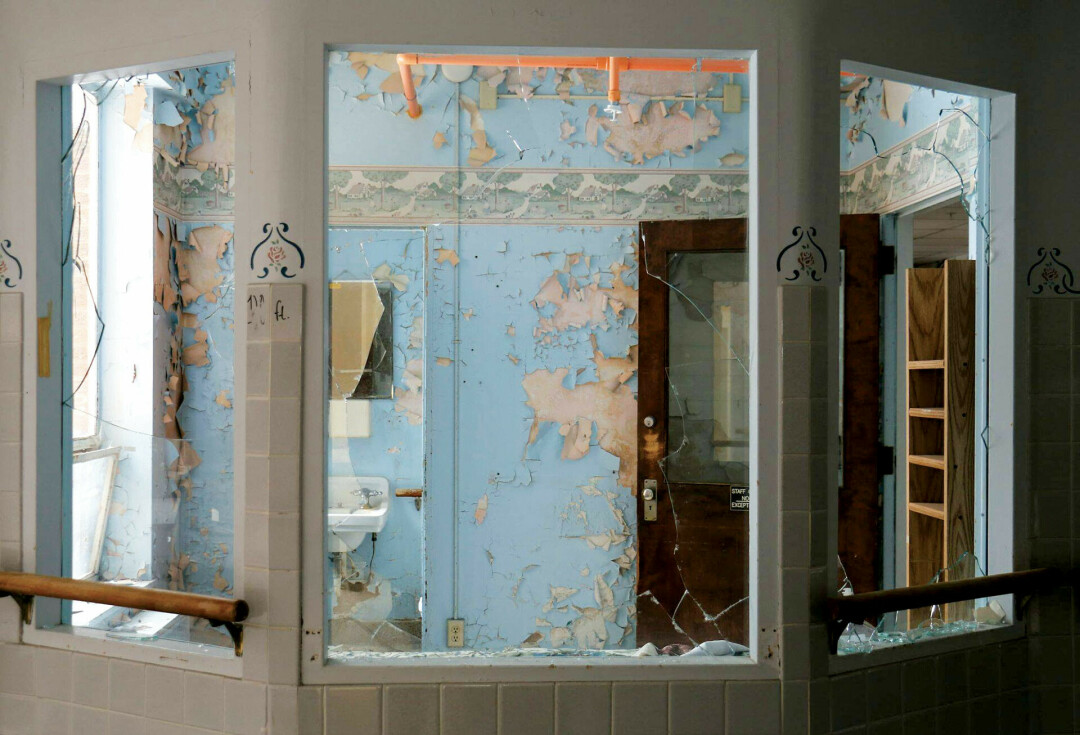 “The building is beautiful,” Henderson said. “It just needs somebody to realize that. There’s too many old buildings being torn down. It’s terrible to see things that have such rich history squandered away or demo’d out.” Engineers have declared the structure to be more than solid, even “over-engineered” in a good way, Henderson said, and that renovation would be cheaper than demolition and starting over.

Opening originally in 1937, the building was once a hospital and sanatorium, housing polio and tuberculosis patients. 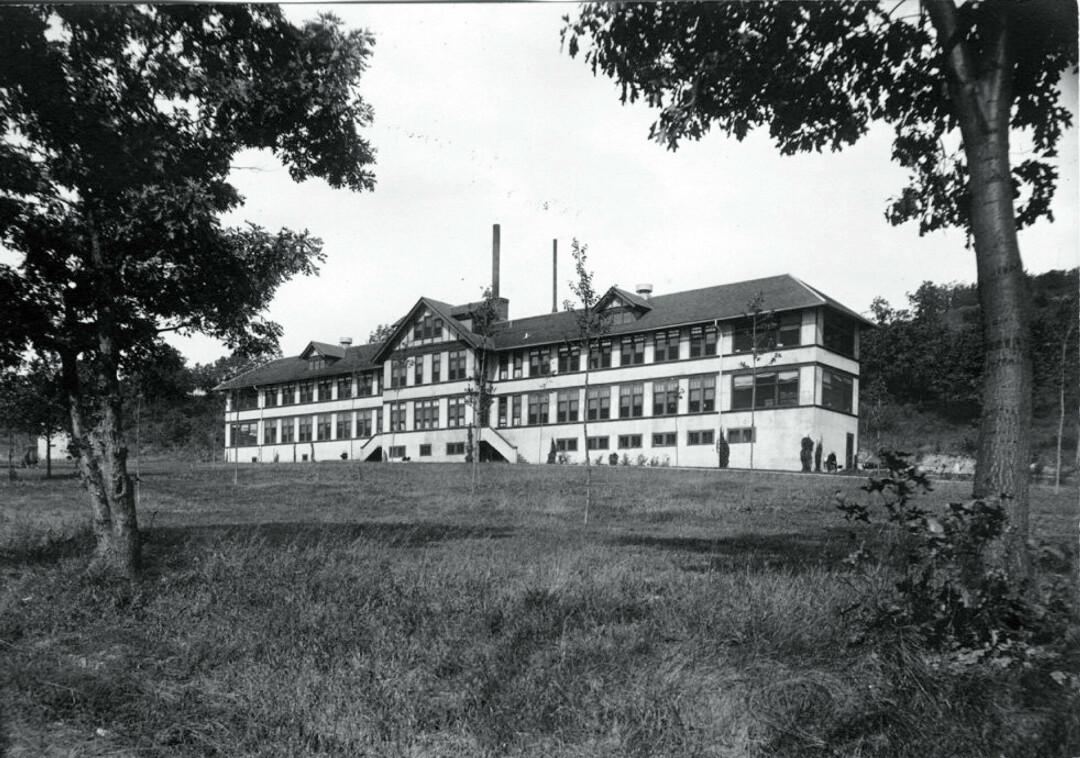 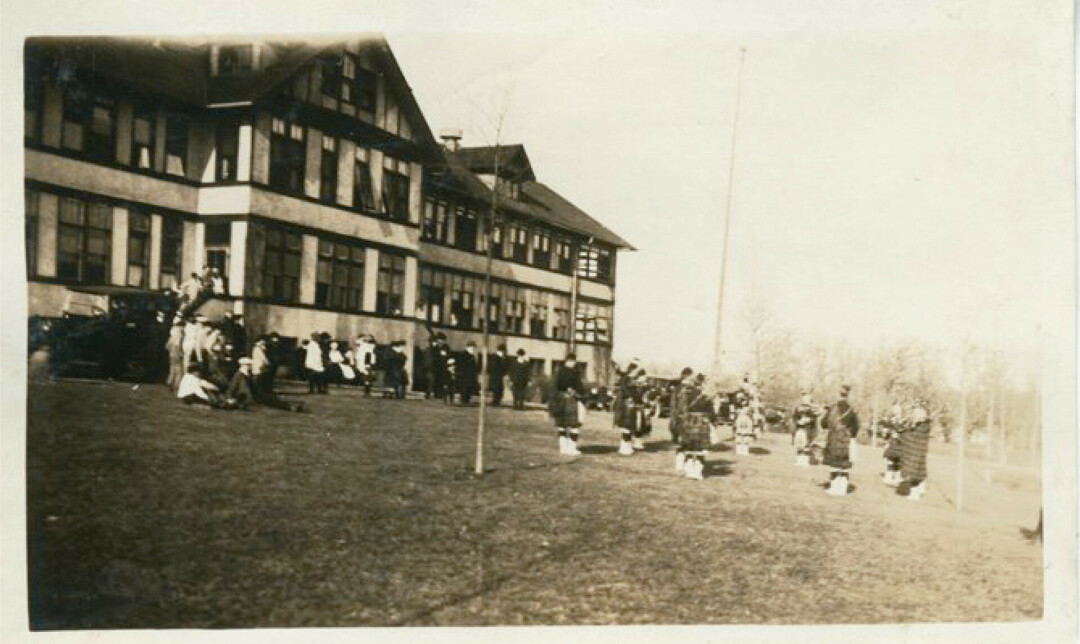 The original building, pictured here in 1916, burned to the ground in 1948 - though luckily, a second structure had been built in 1937.
Photos courtesy of the Chippewa Valley Museum

As the diseases subsided, it gradually became a retirement home.

By 2017, it was closed. Rumors of ghosts attracted break-ins from thrill-seekers, which led to vandalism and theft of copper wiring and other salvageable scrap parts. 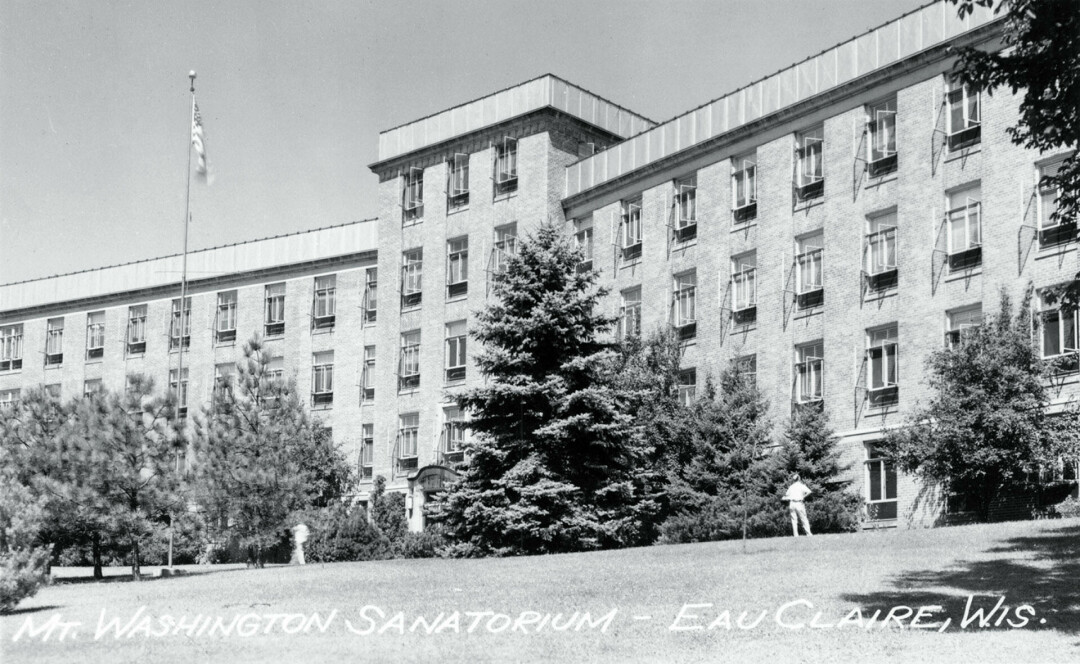 As we walked through the building, Henderson was unfazed by the ice on the floor and the leaking pipes. He takes a pragmatic approach to issues that might send other developers headed the other way – or calling a demolition crew. Eau Claire buildings have lived this story before. Uniroyal became Banbury Place. The Green Tree Inn became The Oxbow Hotel. The Ramada Inn became The Lismore. Can it happen again in Shawtown?

Henderson and his team are betting on it. And rather than taking the “maximize revenue” route, he’s committed to preserving the architecture, the history, and to promoting the building as a community center.

“It’s not about how many apartments can I cram in here,” he said. “I want the people in Shawtown to benefit from this just as much as people who live here.” The community room, coffee shop, mini-grocery store, restaurant, and workout facilities will all be available to the community.

This could be a significant boost for Shawtown, as one of its most interesting – and abandoned – landmarks, once a source of decay and vandalism, could now become a source of pride. Having grown up in small-town Iowa, Henderson values tight-knit communities. He moved from Iowa to Altoona five years ago after getting married. When his wife mentioned that she’d heard the building was for sale, Henderson took interest in it, beyond a simple business opportunity. 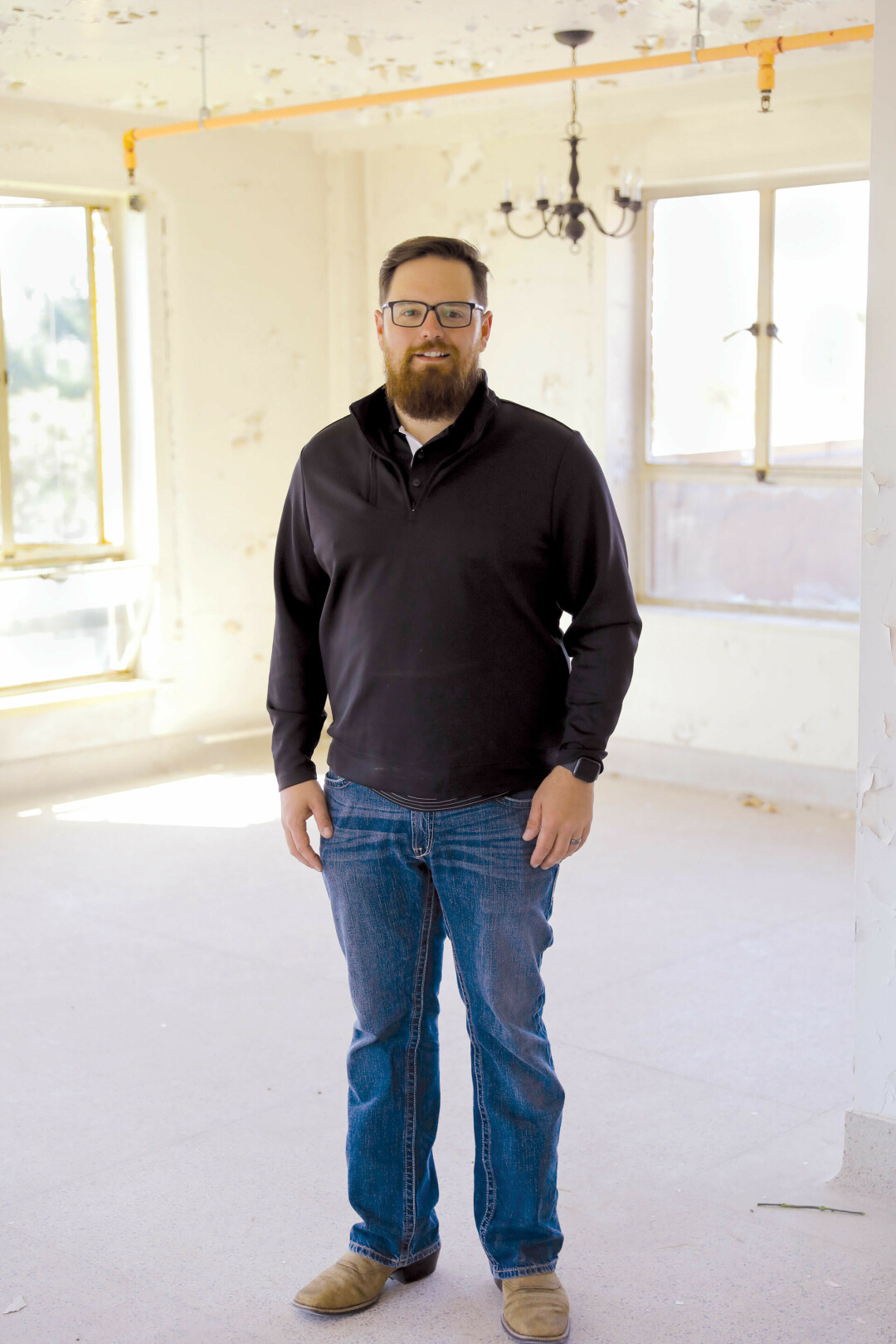 On our building walk-through, he came across as less of a development mongrel and more of a community-minded guy with a fascination for old buildings.

“You could take this project a lot of different ways,” he said. “The respect you want to give to the property … you need to consider that it is historically significant, and you need to embrace some of these things because if you don’t, you’re dealing with a brick structure that hasn’t had life in it for a few years. But if you recognize there’s a century’s worth of history to be told here, we can tell it together. It becomes a whole different venture.”

And the rebuilding process – worthy of a reality TV show – is being documented by Brick by Brick, led by Levi Otterson in a series of videos on their Brick by Brick Facebook page. Add popular local photographer Tina Ecker, and the broken-down insides become a thing of beauty. Fans of old architecture will appreciate the restoration process, posted with weekly updates. “This allows the contractors, architects, and engineers” a chance to “show off what they’re doing,” Henderson said. 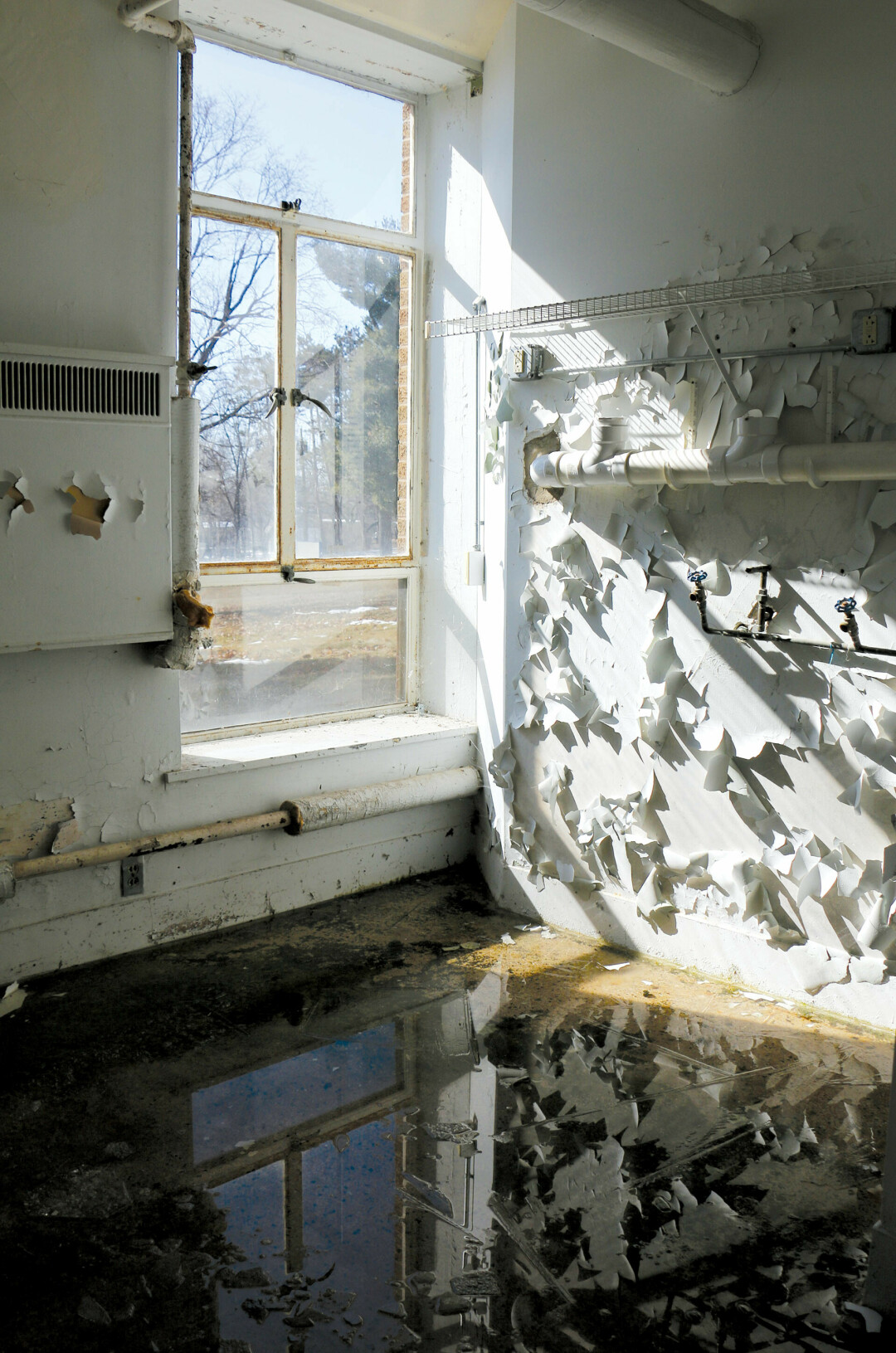 They’ve also posted a video of a ghost-hunting expedition in the building, with alleged voices from the beyond. It’s creepy, campy fun. Henderson discusses the ghost rumors in the same manner he talks about restorations. He’s respectful of what is, but he’s ready to move it forward. The videos that are actually the most exciting are the ones with drone footage showing the panoramic rooftop view of the Chippewa River – sights that will be available to the public from the top-floor restaurant.

While these videos get the viewers excited and hopeful, they also prompt the question: Can this be done? Is the preservation and the “community within a community” approach – while laudable – actually feasible?

Henderson is highly idealistic, but he’s also a realist. “The project doesn’t get done on hopes and dreams; it gets done on dollars and cents,” he said. While he is open to other investment groups, he says he will complete the project with or without them. His ability to do this, when his last name isn’t Menard or Phillips, has been puzzling to locals, which Henderson understands. 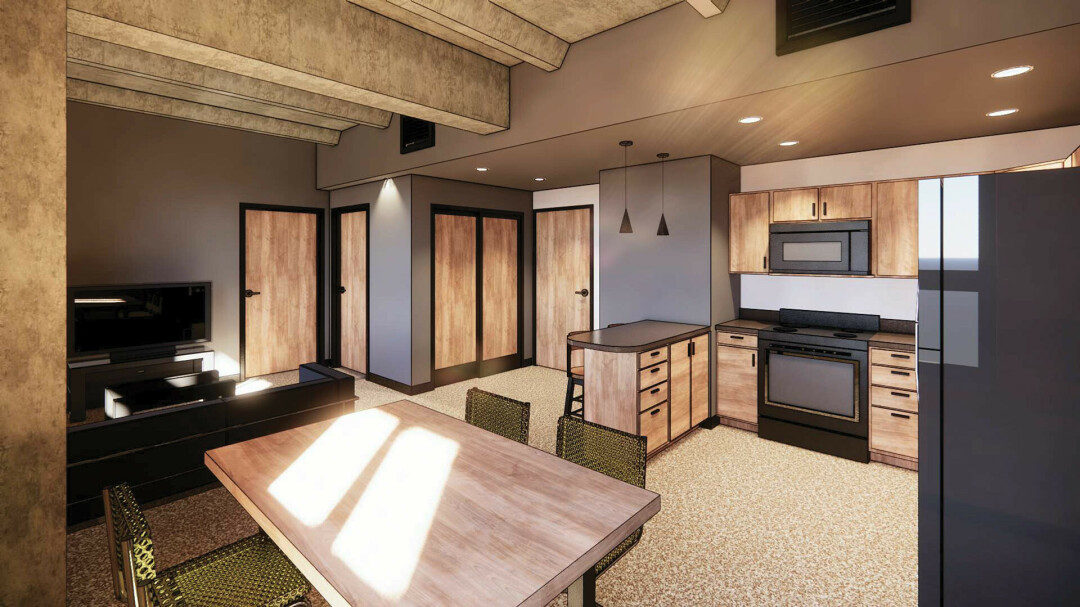 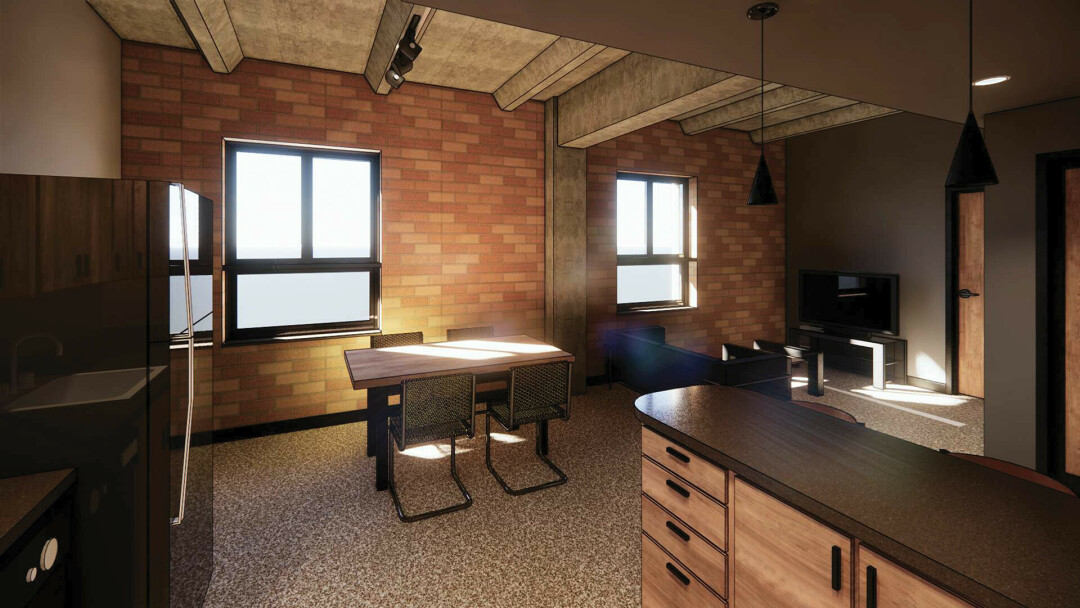 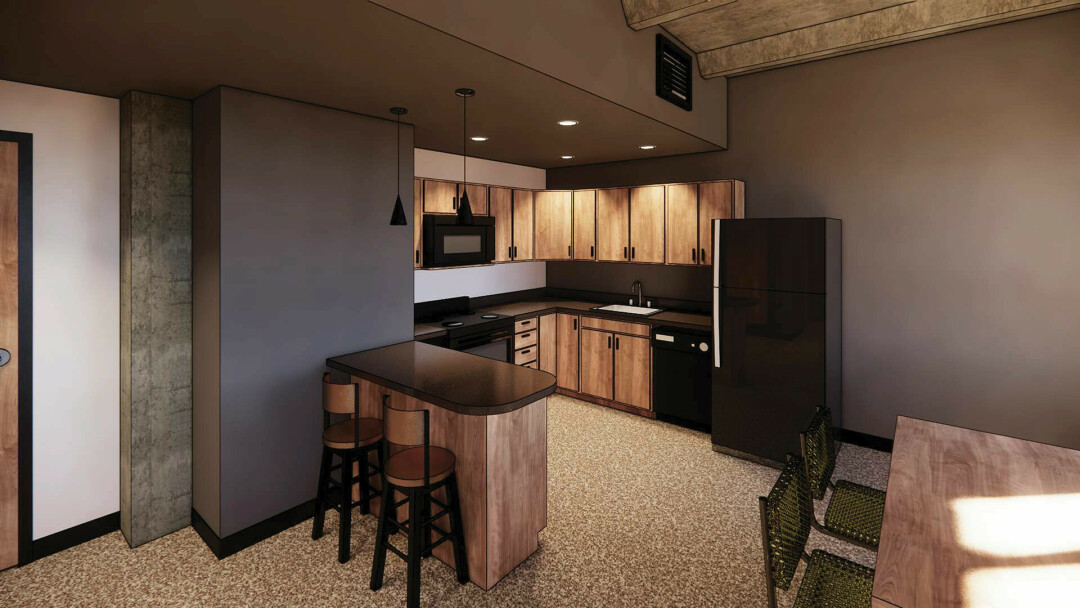 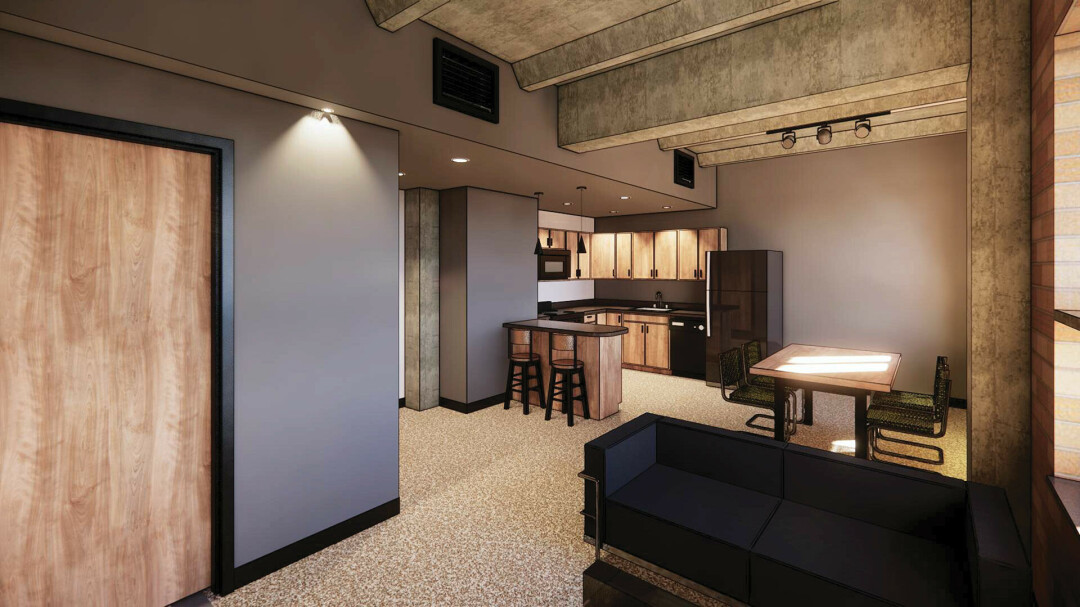 Renovations will give Mount Washington a very different interior, as shown by these renderings.

“I’m not from Eau Claire. People don’t know me. It’s not like I’m a name associated with some big-time developer in the area. That’s another reason we’re wanting to tell the story of Brick by Brick. If we don’t share that with people, then it’s just a project. And when it’s done, it’s just a beautiful building. Whereas if we’re honest with people, and we share everything with people, there’s more here, and there’s more depth to me. I want people to understand that, hey, we’re different. We’re not developers. We’re not property tycoons. It’s not to say that the people I work with in some of my other business ventures aren’t property tycoons and (could) back me up. But it’s about more.”

This is where Henderson really gets rolling.

And as we stand outside, ready to part ways, he offers a final thought. “The biggest thing about Brick by Brick and what we’re doing here is not me. The building is its own personality. Yeah, I’m the narrator, but that’s the main character,” he said, pointing up at the vacant building that will be known simply as The Washington.

It’s a story that will continue to unfold – page by page, day by day, and – yes – brick by brick.

Learn more about the project and follow update on the Brick By Brick Mt. Washington Facebook page.