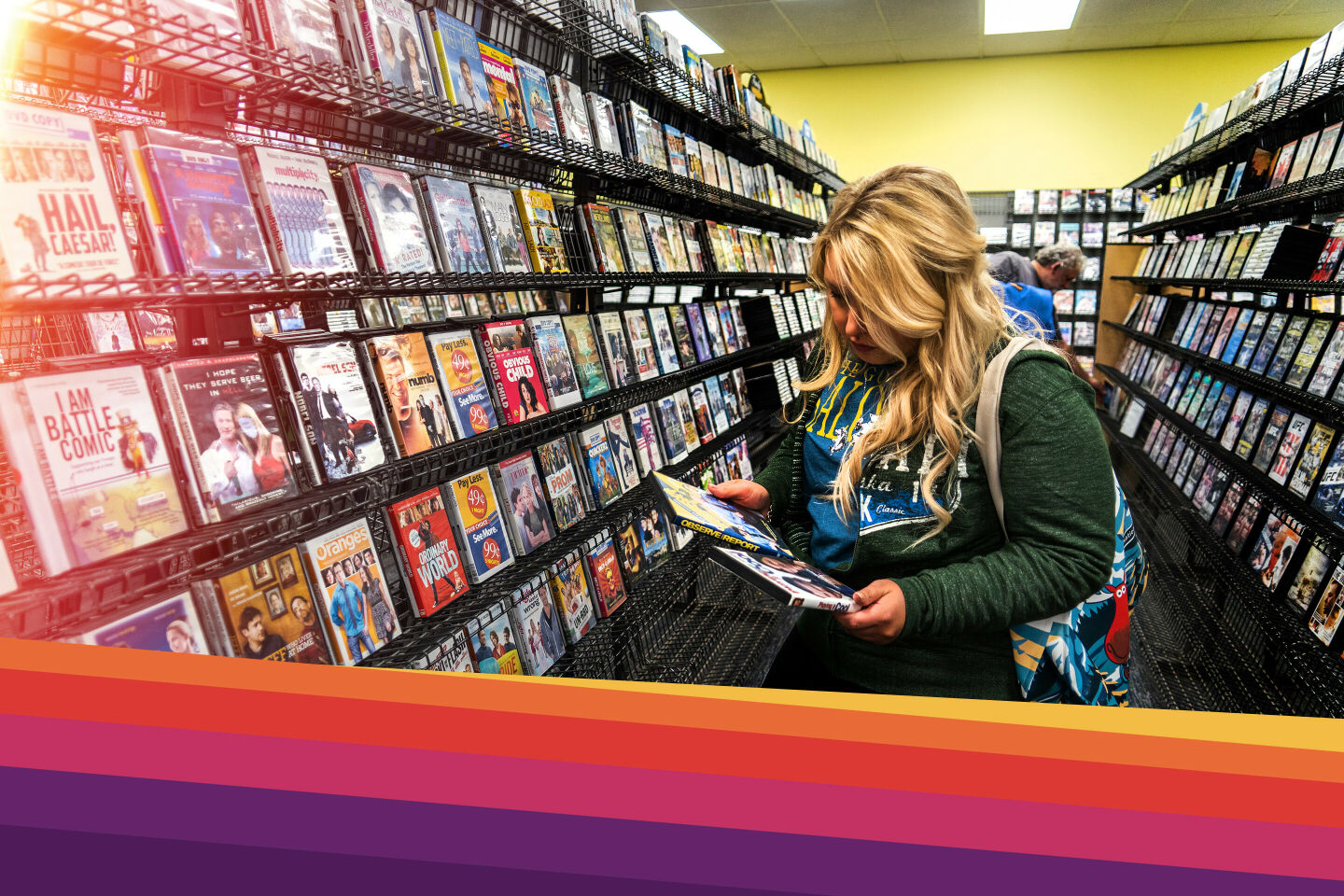 It was the ’80s band The Buggles that sang “Video Killed The Radio Star.” But with the closing of the last Family Video in Eau Claire, it was 2020 that killed the video store.

With the dust barely settled on the new year, Family Video announced on Jan. 6 that it would close its London Road location, thus marking the wistful end of the last remaining video store in the Chippewa Valley.

“2020 was very rough,” said Karen Spann, store manager at the London Road Family Video. “COVID had a devastating impact on our business.”

Area film lovers will remember the Family Video locations on Madison Street and Golf Road, which dissolved in recent years – though Family Video still owns the properties – in favor of the more quaint and personable London Road location in 2019.

“We’re still experiencing a ‘COVID hangover,’ as I call it,” Spann said earlier this year. “It hit our business hard, like so many others, and unfortunately weren’t able to bounce back.”

In an ever-shifting landscape of streaming services and online movie viewing, Family Video was doing fine and in no imminent danger. But then 2020 happened. With the coronavirus pandemic tightening everyone’s wallets through the year and into 2021, like all businesses, Family Video struggled to find its footing. And now, they decided, it’s time to roll the credits. And with them comes the end of an era.

VHS video was introduced in 1977, but the cutting-edge technology didn’t find its way into many American homes until the 1980s. And with that came the introduction of the video store.

A lighthouse to the culturally thirsty, video stores scratched an itch much like record stores did (and still do) as a beacon for the curious, the heartbroken, the lost, the found, the smitten. For families looking to share a laugh. Or a cry. Or anyone ready to dive into the life and world of others for a few hours after a long day at work. To those and so many more, the video store has been hallowed ground for decades.

The bond between a movie renter and a video store worker could be akin to that of Frodo and Samwise Gamgee. On the often Tolkien-esque journey of movie selection, they were both sidekick and valued counsel. Equal parts expert and therapist, they were the filmic gatekeepers who could translate one’s mood into the perfect recommendation, servicing a role far beyond that of just retail service.

“For me, what I’ll miss most is the customers,” Spann said. “Talking with them and helping them pick the best fit for them. To help decide how they’ll spend their evenings, their time with family and friends. I’ll miss that very much.”

It’s a sentiment that many video store employees share, including Drew Duggan, who worked as assistant manager at Blockbuster Video on Hastings Way in Eau Claire from 2006-10.

“One of my favorite things was just all the conversations around movies,” Duggan said. “Having someone come back in and say, ‘Thanks for the recommendation!’ was great. You just don’t get that personal feeling through a Redbox or streaming app algorithm.”

“Having someone come back in and say, ‘Thanks for the recommendation!’ was great. You just don’t get that personal feeling through a Redbox or streaming app algorithm.”

And, beyond the customer-employee relationship, video store employees around the Chippewa Valley maintained good relationships through the era of movie renting. “We used to prank call back and forth with the other Blockbusters,” confessed Kayla Piper, assistant manager of the Blockbuster Video on Hastings Way from 2006-10. “We’d get calls with the most outlandish requests or issues, and you wouldn’t know it it was a real customer or not, so (we) had to play it cool. There were times when you’d get like, five minutes into a call before realizing it was actually someone from the Chippewa store. We were all pretty close.”

Some Vallians may remember the first video stores to pop up around town. In the ’80s and ’90s, if you were in the North Side, there was Top Ten Video on the corner of Eddy and Locust lanes, where the Pizza Hut is now.

For East Side Eau Clairians, there was Video Vistas off of Clairemont Avenue and Menomonie Street. Or the American Video on Water Street, nestled in the vacant lot next to where Burrachos currently sits.

“Video stores were such a big part of many of our lives growing up,” Piper said. “We couldn’t really choose what we wanted to watch on TV, so it was such an event to go pick something out together. There is something to be said about having common spaces for people with similar interests to spend time at. The people we worked with and our regular customers became our community. We could talk endlessly about movies and never get tired of it.”

In a bygone era when grocery stores served also as de facto movie stores, families and film aficionados could swing into Duke’s Finer Foods on East Hamilton, Mega Foods on Hastings, or Pinehurst Foods on the North Side to pick up a flick.

In the spring of 1990, the first Blockbuster Video came to Eau Claire, in what is now Eastridge Plaza. Shortly after, Premiere Video opened just up Hastings, where O’Reilly Auto Parts currently resides. Premiere was notable for having the largest selection in town, and also a curious section in back where – doubtless – many children first had the “birds and bees” conversation after asking what was behind the precarious saloon-style doors with the “18 & Older Only” sign. (“Well, when two people really love each other, sometimes they go to a video store ...”)

Things weren’t always as convenient as clicking on our Apple TVs, cellphones, or laptops and tapping an app to watch a movie. If today were a given day in the ’80s or ’90s, odds are you might spend no less than five minutes rewinding VHS tapes. Yet, it created opportunities for human interaction.

“I appreciated the moments when I could guide a customer to a movie I felt they may like after getting to know them or reviewing their rental history,” said Neil Hodorowski, an employee at Top Ten Video store from 1998-99, “and I certainly appreciated getting recommendations on films to see when talking to ‘my guy’ as a customer at other hometown video stores. Streaming services just don’t have that personal touch.”

“We used to prank call back and forth with the other Blockbusters. We’d get calls with the most outlandish requests or issues, and you wouldn’t know if it was a real customer or not, so (we) had to play it cool.”

In a time before the multitude of Hulus and Rokus, “be kind, rewind” was much more than just a courtesy slogan. It was a way of life.

A Fond Remembrance of Film

In our household Saturdays in the ’90s were sacrosanct. We would do our grocery shopping at Mega Foods on Hastings before bouncing from the Mega video section to the new Blockbuster next door, then over to Premiere Video to gleefully finalize the coming week’s movie selections. As a child from the country in the pre-Internet days, these were some of my earliest visual glimpses at lives outside Northwest Wisconsin. The remarkable works of Sidney Poitier, Spike Lee, Satyajit Ray, and so many others painted pictures of worlds I’d never known. These trips and the movies chosen cannot be understated as formidable moments of my youth – as they were for many.

“Growing up, we’d go to the movie store all the time, and just load up on movies,” Duggan said. “When we got home, my dad would make popcorn, and we’d get all the blankets and pillows we could scrounge up, make a huge bed on the floor, and watch movies all weekend. It was awesome. So I always had great memories, and I’d see all sorts of people coming into the store like I’ve been over the years.”

I first learned the value of film as a healing mechanism in 1991. As a child of 10, our family’s beloved cocker spaniel Shadow had passed away. Utterly unconsolable, I took several days off of school and spent the bulk of that time watching movies with family. One of the few that gave me comfort was a new release, a whimsical comedy turned cult classic called Don’t Tell Mom The Babysitter’s Dead. Knowing fans may recall the absurdist story of a family whose parents go out of town, leaving the children with a babysitter who meets her untimely demise. A titular scene involves the eldest son, Kenny, throwing the dirty dishware off the family’s roof, shooting them with a rifle like clay pigeons, and declaring for all to hear, “The dishes are done!”

A couple years ago, my beloved wife, Kelly, and I were at a film event at the Castro Theater in San Francisco and happened to stumble into the actor Keith Coogan and his wife. Known for a multitude of recognizable roles, among them Kenny from Don’t Tell Mom The Babysitter’s Dead, the opportunity was taken to share that story and thank him for using film to bring joy to many, including an Eau Claire boy who had lost his best friend. It was a beautiful full circle moment, and Keith was grateful for sharing, saying, “That’s why we do this.”

“Now it’s going to be a relic that we tell (our) grandkids about, like dime stores and soda fountains.”

The day Family Video announced its closure, I had to stop in immediately – in part to see if it was true, but also to offer thanks and gratitude. Once informed everything was now for sale, it was a somber hour spent perusing the aisles, picking meaningful films that, sadly, would now come home with me and no one else. Leafing carefully through New Releases and Classic Films, an arm already full of DVDs, my fingers didn’t hesitate to choose The Last Picture Show off the shelf. The Peter Bogdonavich classic is a coming-of-age tale of a small Texas town, set against the ominous backdrop of deployment to the Korean War, with a group of friends bonding over the final screening at the local movie theater. As the last copy of The Last Picture Show from the last video store in the Chippewa Valley was purchased, it seemed, for lack of a better metaphor, like a scene from a movie.

“Going to ‘the movie store’ was a fun family event,” Duggan said, “so it’s definitely sad to see it gone. Now it’s going to be a relic that we tell (our) grandkids about, like dime stores and soda fountains.”

To be sure, movies aren’t going anywhere. They’ll be online, and hopefully theaters will recover post-pandemic. But for Chippewa Valley film lovers, if we want to taste the filmic cultures and visual cuisines beyond ours – feasting on a French dish like Amelie, a Mexican dish like Roma, or a Chinese dish like The Farewell – it will now be through a streaming service, and without our own beloved Samwise Gamgees, the video store employees.

For our beloved Chippewa Valley video stores, it seems, the dishes are done.