Pablo Center is setting for set by CJ Camerieri and friends 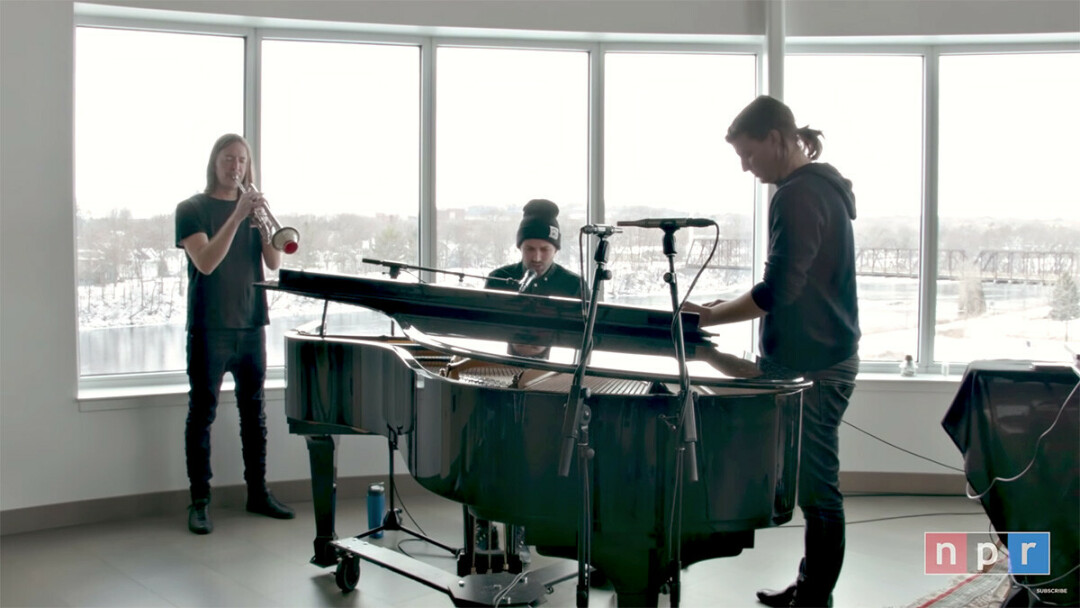 What do you get when you combined some gifted brass players, electronic instrumentation, and a third-floor panorama of the Chippewa River? The answer is the latest installment in NPR’s long-running Tiny Desk Concert series, released Thursday, April 15.

The Tiny Desk (Home) Concert paid a video visit to Eau Claire to feature a performance by CARM, a brass-driven indie project from CJ Camerieri. A multi-instrumentalist and co-founder of the chamber ensemble yMusic, Camerieri has collaborated with the likes of Bon Iver, The National, and Sufjan Stevens. CARM’s self-titled debut album, which came out in January, was conceived and recorded at the Pablo Center at the Confluence in downtown Eau Claire, which also serves as the setting for the video.

“This is not our home but we really think of this place, Eau Claire, Wisconsin, and the Pablo Center, as our creative home,” Camerieri says in the video. “All of this music was written, recorded, and mixed and mastered here. This particular community has been a really big part of my musical life.”

The 17-minute, four-song set includes contributions from Eau Claire’s Sean Carey (of S. Carey and Bon Iver) and Eau Claire native Trever Hagen, who has also collaborated with the likes of Bon Iver and Marijuana Deathsquads. The audio work is by Brian Joseph of Eau Claire’s Hive Studio.

Tiny Desk Concerts began in 2008 with a performance at NPR host Bob Boilen’s desk in Washington, D.C. Nearly a thousand concerts and a few billion YouTube views later, the pandemic hit last year and the series was rebranded as the Tiny Desk (Home) Concerts, now originating from venues around the world. Recent performers have included the likes of Demi Lovato and Justin Bieber, so Camerieri & Co. are in high-profile company.

Boilen had this to say about CARM:

For the Tiny Desk (home) concert series, 'home' can mean many things. For CJ Camerieri and his project CARM, home is where the art is. He performed his concert at the Pablo Center in Eau Claire, Wisc., where the trumpeter and French horn player conceived and recorded all the songs for his 2021 debut solo album, CARM. "This particular community has been a really big part of my musical life for 10 years," CJ says after playing the calming tune "Soft Night," "so it seems like the perfect place to be doing this."

CJ Camerieri is a co-founder of the ensemble yMusic, a member of Paul Simon's band, a collaborator with Bon Iver and a Tiny Desk alum. (You can hear his French horn with The Tallest Man On Earth from their 2019 Tiny Desk Concert.) For this home concert, Trever Hagen joins him to provide the electronic pulse, trumpet, and other textures to the mix. On song two, he welcomes fellow Eau Claire musician S. Carey, a drummer and singer with Bon Iver, as well as someone I've admired as a solo artist. Here he plays piano and sings a song CJ co-wrote with Sufjan Stevens titled "Song of Trouble." It's a song written pre-pandemic and, like so many songs, has taken on new significance. And that goes for both the jittery electronica and the calming horns we hear; it's music that's resonated with me all year long.

If this Tiny Desk set appeals to you, CARM and Trever Hagen will be performing at 6:30pm Thursday, April 29, as part of the free, virtual Pablo Streams series. Find out more about that show here.