new historical society building may be open by winter 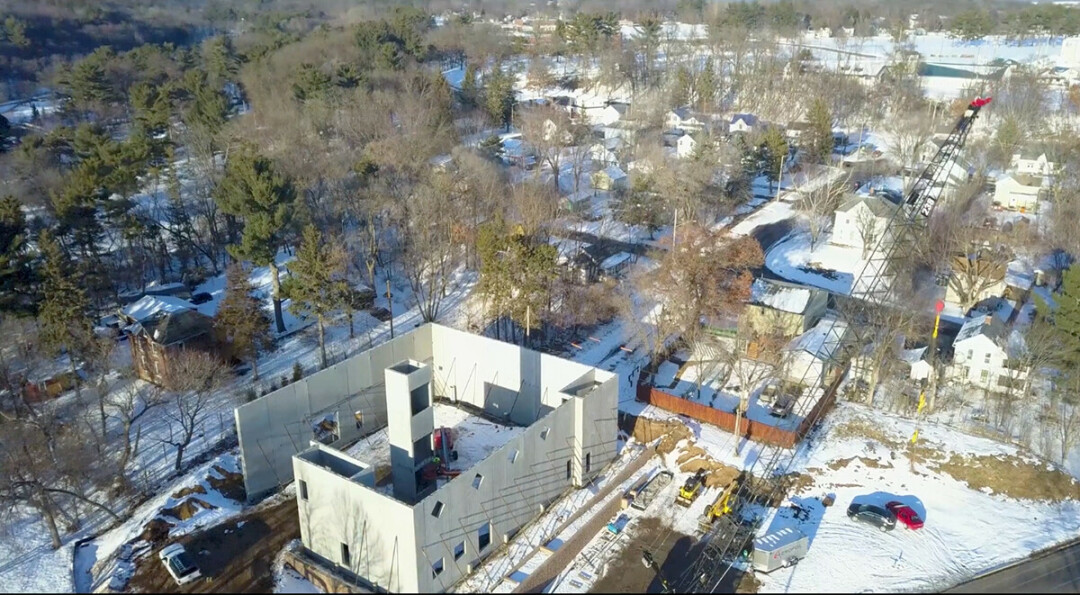 An aerial view of construction as of February. (Photo by Tony Rubenzer via Facebook)

After years of fundraising and planning, the new Chippewa Area History Center is finally beginning to take shape. The Chippewa County Historical Society has had plans since December 2015 to build a new history center to replace its current home at 123 Allen St. in Chippewa Falls. Since making those plans, the historical society has raised more than $3 million to fund construction at 12 Bridgewater Ave., near the entrance to Irvine Park.

Frank Smoot, the museum’s developer and acting director of the Chippewa County Historical Society, said by late April, subcontractors will be arriving to work on the interior, with construction on the exterior reaching completion soon.

“If things go very well, it’s possible the Chippewa County Historical Society may be able to get the keys to the building by the late summer,” Smoot said, “which would be a little ahead of schedule. After that, we need to move the collections and install the exhibits.”

While the pandemic has hit everyone differently, the historical society has seen ups and downs. According to Smoot, when the stock market fell sharply due to speculation of the pandemic and lockdowns, donations dried up.

One benefit, however, was the willingness of volunteers to help out. Elizabeth Peterson has been working several days a week to pack and organize the collection the society owns. “She’s carefully packed probably 1,000 boxes’ worth,” Smoot said. “The former convent we’re currently in has 49 rooms, and each of those rooms has a closet, and all of those rooms were stuffed. We wouldn’t be anywhere without (Peterson).”

Smoot also said that as more people in the Chippewa Valley receive their COVID-19 vaccinations, more volunteers have showed up to help.

While it’s too early to say when the center will be open to the public, Smoot said he wouldn’t be shocked if it were open by this year’s holiday season. “Projects like this begin in the community … they’re led forward by the community … and the history center will be sustained through the community,” Smoot said. “They’ll visit the center, staff the place, come up with the best ideas for exhibits and programs and they’ll enjoy the history center for the next hundred years. It’s their place. We’re just helping them give it a good start in life.”

Learn more about the project and how you can lend your support at chippewaareahistorycenter.org.