What Lurks Under Chippewa Valley Waters? 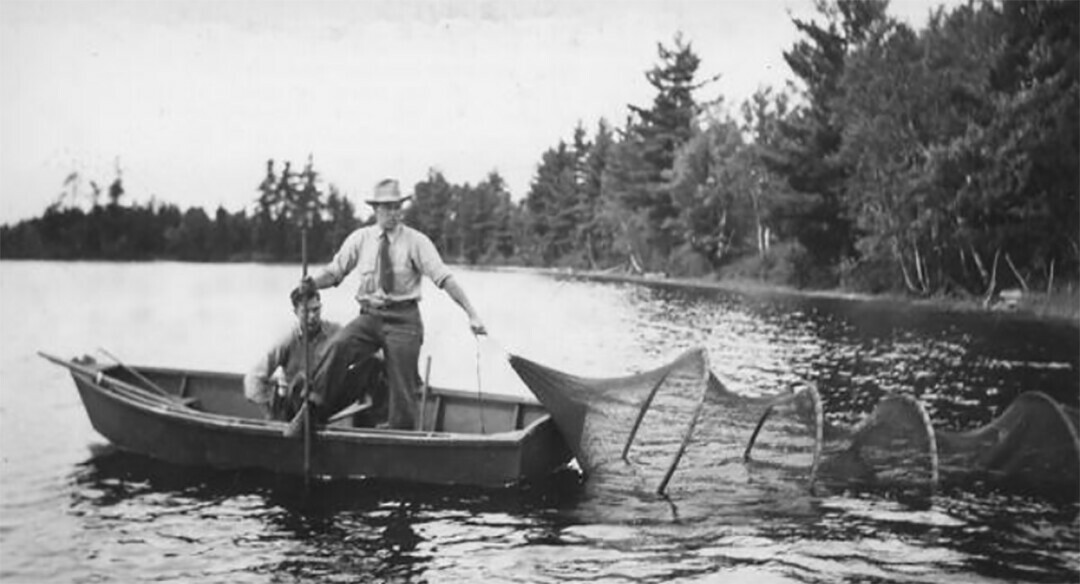 What may be termed a “chameleon fish” has been discovered by the government seiners working in the Black and Mississippi rivers near here, and so far local scientists, who have been trying to establish the identity of the freak, have failed. The fish differs in many particulars from the usual fish both in habits and in looks. During the time it has been in the hands of the local fishery crew it has changed in hue several times, each variation coming with a drop or rise in temperature.

With the recent cold spell that invaded this part of the state it shifted from a light “pike color” to a dark, almost the color of a channel catfish. With the head of a black bass it has the body of a sand pike. The head tallies with that of bass with the exception of the red mark in the eye, characteristic of the black bass. The body, shaped like a pike, has none of the pike’s characteristic colorings. When startled by a touch, instead of darting forward, or to the side, as do most fish, it dives to the bottom of the tank and with a few flips of its tail stirs up the sediment, completely enveloping itself in the cloud. It rarely swims forward but down and over – practically “looping the loop.” The attention of Congressman Esch has been called to the freak and he is in communication with the United States fish commission in an effort to establish its identity.

The attention of Congressman Esch has been called to the freak and he is in communication with the United States fish commission in an effort to establish its identity.

For some inexplicable reason the Chippewa Valley was once rife with some very odd creatures. In past articles I have written about the swordfish caught in the Eau Claire River, the small hippopotamus-looking thing dug up in Shawtown, Water Street’s monster black snake, the Third Ward’s trained porcupine, Chippewa’s giant wolf, and an unknown vicious animal causing terror in Eau Claire. For those of you keeping track of Chippewa Valley oddities get out your pencil, because you can now add “chameleon fish” to your ever-growing list. Why was the Chippewa Valley such a hotbed of weird animals? One could certainly understand these stories coming from the logging camps of the North Woods where stories of Paul Bunyan, 20-pound mosquitoes, and the Hodag were commonplace. But when these same stories originated in the heart of the booming Chippewa Valley community their explanations become a bit clouded.

Were these bizarre cases simply a matter that the science of the day wasn’t advanced enough to identify these creatures, or do these mysterious creatures remain unknown today? Unfortunately in this case we will never know. Word was never given whether Congressman Esch, or anyone else, was able to identify this strange fish. Even the final whereabouts of the fish have been lost to history. Perhaps the preserved fish is tucked away under a pile of dust in your attic waiting patiently to finally be discovered.

Keep an eye out …