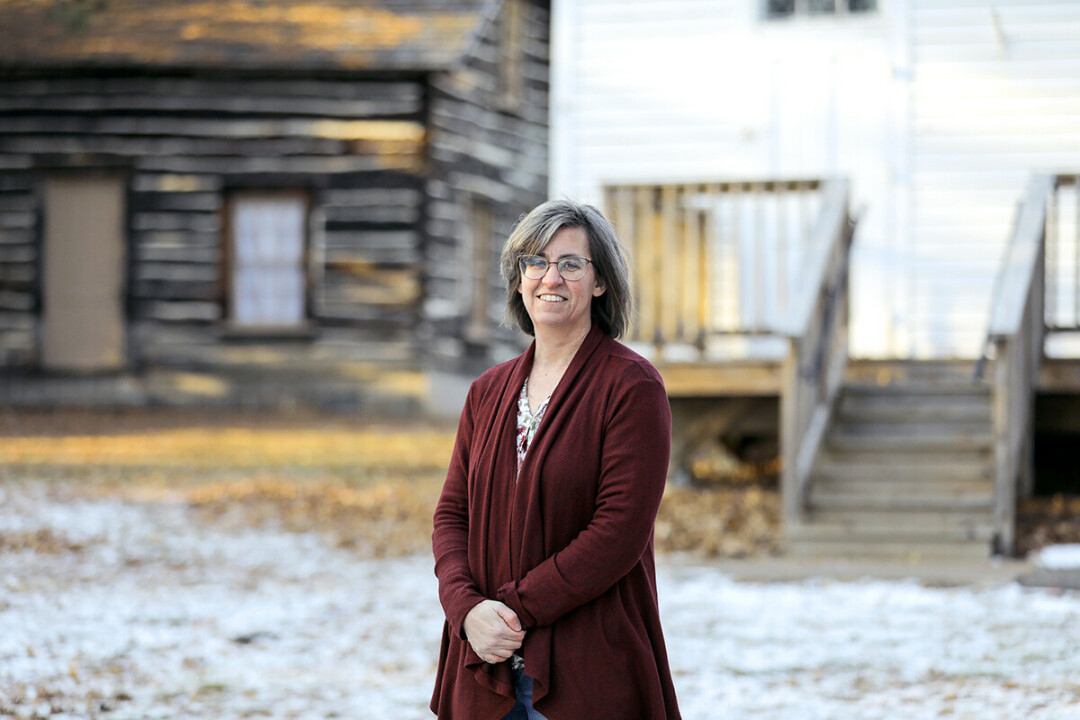 Carrie Ronnander poses outside the Chippewa Valley Museum in Eau Claire's Carson Park. Behind her you can see the Anderson Log House, left, and Sunnyview School.

“I really do think it’s critically important that we all know our history,” says Carrie Ronnander, director of the Chippewa Valley Museum in Eau Claire. “Ignoring the past, or worse, forgetting it, can be a dangerous thing in a democracy.” A native of southern Wisconsin, Ronnander and her husband relocated to the area from St. Paul in 2000. Here, she sounds off on old buildings, olive and swiss burgers, and the secret history of Eau Claire’s “Pig Town.”

Sacred Heart of Jesus or St. Patrick church, every Sunday.

Public investment in outdoor spaces. Boyd, Pinehurst, and Phoenix parks in Eau Claire; Irvine and Riverfront parks in Chippewa Falls; bike trails, skate parks, and at least four Eau Claire pedestrian bridges have all been improved or developed since we moved here.

The architecture in downtown Eau Claire. We’ve been building up and tearing down buildings since the 1850s and I’m not opposed to new development (I.e., a building shouldn’t be saved just because it’s old). But mid-20th century building aesthetics, or lack thereof, left us some really bland, utilitarian buildings and parking structures. This has changed some in recent decades, thank goodness.

Attending the inaugural Eaux Claires Music & Arts Festival. Or a Fourth of July at Carson Park.

Projecting mapping – animated light show – on either City Hall or the Pablo Center that blends our past with the present. I’ve fallen in love with this idea. (See this video on YouTube.)

I’d invite all my friends and family to meet me at Lazy Monk to listen to Eggplant Heroes.

What is your favorite piece of local trivia? The neighborhood around Banbury Place was called Pig Town in the 1860s  ad’70s. There were cows and pigs all over the city in the early years. If you had cow or two, you had to make sure they were penned up by 10pm or risk having your cows being impounded by annoyed neighbors.

Olive & Swiss burger from Girolamo’s Court’n House, accompanied with cheese curds and Summit Extra Pale Ale. And since this is my last meal, my dessert will be a bag of Peanut Butter Chocolate Popcorn from Dewey Street Candy.

If you would play kubb with any Chippewa Vallian, past or present, who would it be?

Jean Brunet, a Frenchman who lived here 1840s-1874. He did it all: tavern owner, fur trader, sawmill operator, even a judge. From all accounts, he was a pretty great storyteller. Or Jimmy Woo. His personal journey to Eau Claire is pretty fantastic, too. If I’m playing kubb, I’d want to hear some good stories to keep me from thinking about how I’m losing.

Downtown. Love the bridges and lights.

What book, TV show, or movie would you recommend to the members of the City Council?

Hillbilly Elegy by J.D. Vance, a book that really makes you think hard about class differences and class biases. It came out in 2016 and is a must-read.

If you could rename Eau Claire with a different French name, what would it be?

Sacred Heart of Jesus Church. You can see this church from almost anywhere in the city. Try looking for it sometime. And now you can also hear its restored bells ringing.

Banbury Place. When Uniroyal closed in 1992, this place could have become blighted. That’s not what happened. It’s a great story of reinvention and vision.

The Livery. Of course a historian would love having dinner in the historic Olson Livery building. Good food and drink to boot. In case you didn’t know, a livery rented out horses back in the day.