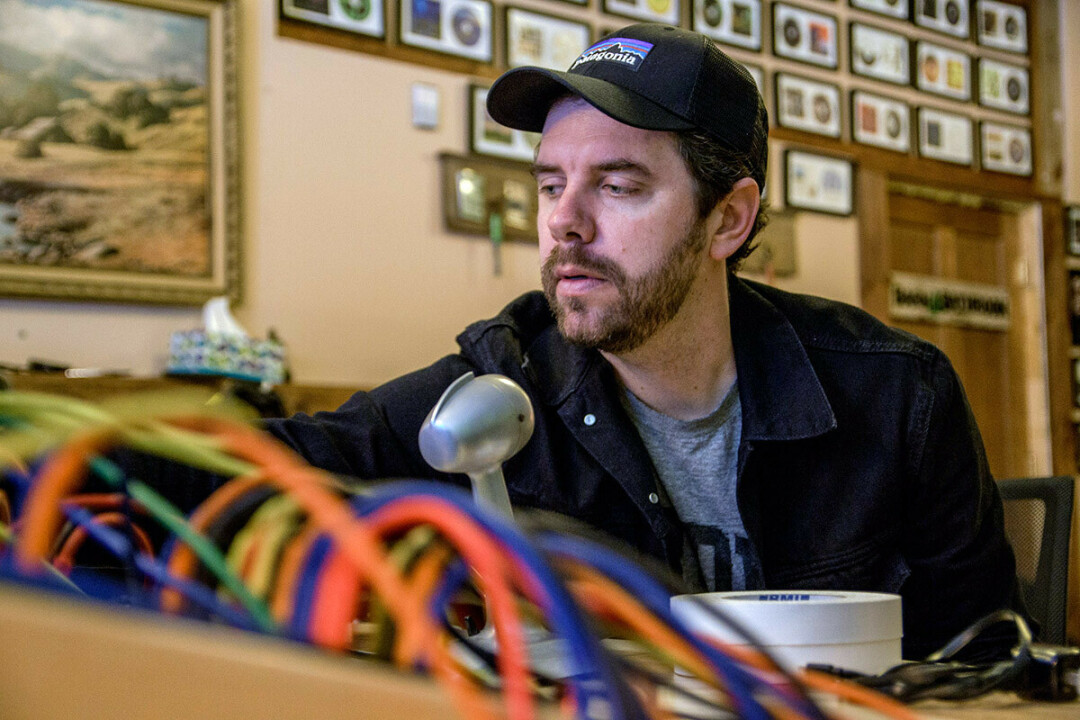 Evan Middlesworth has led a diverse musical career both on stage and behind the scenes. As a producer, he’s collaborated with countless local musicians at his recording studio outside Eau Claire, Pine Hollow; he’s traveled the world as an audio engineer and managed regional bands; and now he’s director of artistic programming at the Pablo Center at the Confluence. Middlesworth talks about hosting shows, pushing the envelope, and feeling the love in Mondovi.

Well, it’s a bit south, but there was a span of time the Mondovi Family Restaurant asked me ‘the usual?’ when Laura and I walked in for breakfast. That was special, it really meant a lot to me!
What’s the most positive local development since you moved here? Downtown encapsulates a lot of positivity. Growing up I saw the downtown of my hometown fall apart, so any place I go that has a scene or at least putting the effort in to making one, warms my heart. Eau Claire is doing a good job but still has room to grow, push boundaries, and challenge ourselves. That’s a healthy spot to be in.

Downtown encapsulates a lot of positivity. Growing up I saw the downtown of my hometown fall apart, so any place I go that has a scene or at least putting the effort in to making one, warms my heart. Eau Claire is doing a good job but still has room to grow, push boundaries, and challenge ourselves. That’s a healthy spot to be in.

On that previous note, I think we can collectively push ourselves more to move on and move forward. I hear the phrase “it’s the way it’s always been” or “it’s been this way for the past X amount of years” too often – usually voiced with a sigh, shrug of the shoulders, and a mindset fearing change. That frame of mind has always bugged me though, it’s not just a Chippewa Valley thing. It’s healthy to be pushed out of our comfort zones, try new things that do feel different and could, yes, risk failure but at least that motivates growth, ideas, and momentum towards something new. I feel it levels the playing field. I feel it’s OK to bid farewell to old, “usual” ways.

Hosting in-studio shows out at Pine Hollow for a few years was special to me on several levels. It seems like a blink and it was done, but those shows with the caliber of artists for small groups of people during a relatively small window of time. It was a dream with a lot of sweet memories tied in – it doesn’t even feel like it happened.

Gotta go with an art installation that harnesses wind, solar, and hydropower of the river to power the downtown area.

Obviously biased, but I have to say Pablo Center to see a show. I can’t fully describe how much I miss working with the team on a show from the early stages of negotiation all the way through the applause and the stage door closing at the end of the night.

Tough one but, I got to go with a hot ham and an ice cold beer from Ray’s. In that moment, it’d be more about the reliving of memories there with buddies than the meal itself, but they are delicious and that beer is cold!

If you would play kubb with any Chippewa Vallian, past or present, who would it be?

Curt Boettcher! Musician/producer who worked with The Beach Boys, Elton John, and The Association, to name a few. I just found out he’s from here about a month ago! I feel like he would have some amazing stories to tell from 1960s LA – a golden era of music/recording. Possibly related to (Eau Claire musician) Jeremy (Boettcher), we think. Plus, if he knew how to play kubb, he could teach me.

It’s ice cream – always delicious no matter where it’s from.

What book, TV show, or movie would you recommend to the members of the City Council?

An Astronaut’s Guide to Life on Earth: What Going to Space Taught Me About Ingenuity, Determination, and Being Prepared for Anything by Col. Chris Hadfield.

If you could rename Eau Claire with a different French name, what would it be?

Oh man, how about Chutes de Rivieras, WI. Rolls off the tongue. Plus, I have no doubt that The Chutes would be the next band to go mega from the CdR.