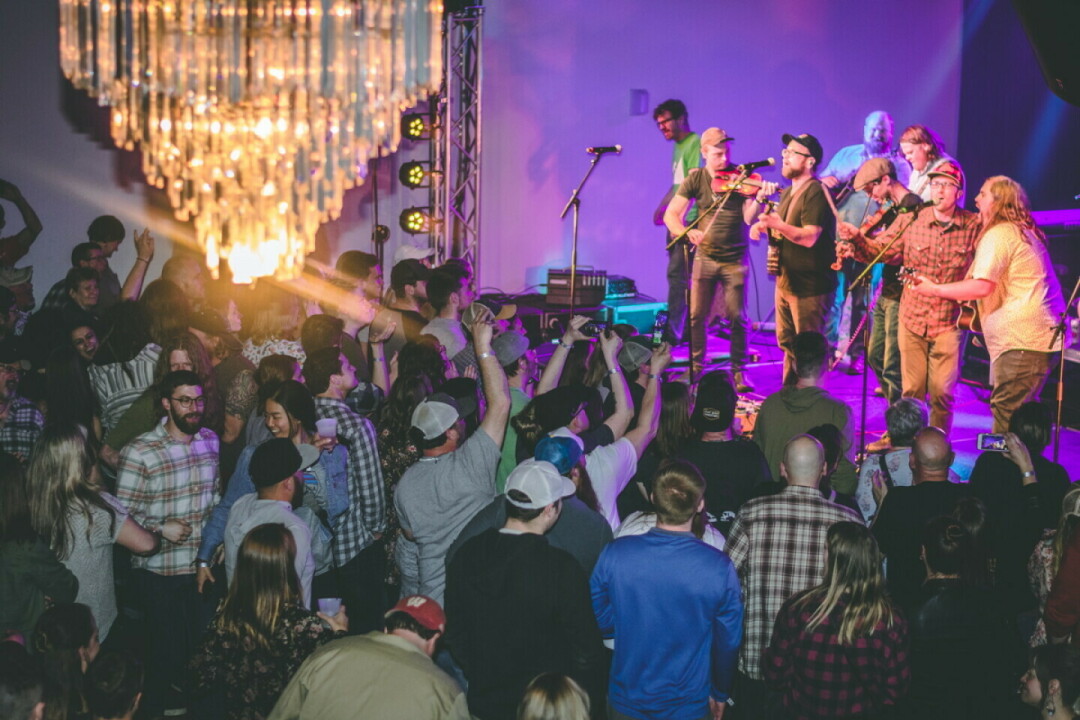 Them Coulee Boys and Pert Near Sandstone closed out a 2019 Road To Blue Ox show, produced by Converge Radio, at The Metro with a two-band jam. (Photo by Taylor Smith)

The local independent station – which, for the last four and a half years, has made a home for local artists, radio shows, podcasts, and personalities on 99.9 WDRK-FM – is leaving the local airwaves.

The license for 99.9 – WDRK (currently known as Converge) has been sold. Effective at 12:01 a.m. on Dec. 8, the station no longer will be broadcasting Converge programming on FM99.9. The new owners, the Family Radio Network, will start broadcasting content to be introduced in the new year. Listeners who want to continue to enjoy Converge programming can still find it at convergeradio.org. We also will be making some announcements regarding continuing the Converge Radio content in 2021. We want to thank our loyal and passionate supporters, hosts, guests and amazing musicians and programming we have been honored to broadcast these past few years. It has been our honor to serve the Chippewa Valley on FM99.9. We look forward to continuing the Converge programming that you have come to value at convergeradio.org.Thank you.

Station Manager Ashley Wiswell sounded an upbeat note in her own statement to Volume One.

“I personally feel so hopeful and excited for what is to come,” Wiswell said. “The biggest message I'd love Converge fans and community members to hear is that yes, we may be evolving, but Converge Radio and the programming won't be going away anytime soon. Stick with us!”

The biggest message I'd love Converge fans and community members to hear is that yes, we may be evolving, but Converge Radio and the programming won't be going away anytime soon. Stick with us!

In September, Volume One reported that Blugold Radio LLC, a subsidiary of the UW-Eau Claire Foundation, the entity that owns the station, sold the tower, license, and call letters to the Family Radio Network – a Christian radio network based in Appleton.

At the time, Kimera Way, executive director of Blugold Radio LLC and president of the UW-Eau Claire Foundation, said the decision to shutter the station was difficult and painful; but financially, it had to be done.

“We just never were able to find our niche in terms of generating advertising support and sponsorship in the way we needed,” Way said. A September media release stated that selling the license will allow the UWEC Foundation “to concentrate on its core mission of student recruitment, retention, and success.”

However, Converge itself subsequently shared a statement on social media saying the station and its devoted following of listeners will indeed have a future – a bright one, in fact – just not at the same spot on the dial. “Friends, you may have heard that Converge Radio is going away,” the statement began. “Let us state this very clearly … IT IS NOT! It is alive and well and we have big dreams.”

The station has said that they plan to continue streaming online via the TuneIn radio app and on the Converge Radio website. They do indeed have grand plans for the future of Converge. Whatever shape that may take, it’s not over.

“Stick with us, Converge Fam,” the statement read. “Seriously, great things await us!” 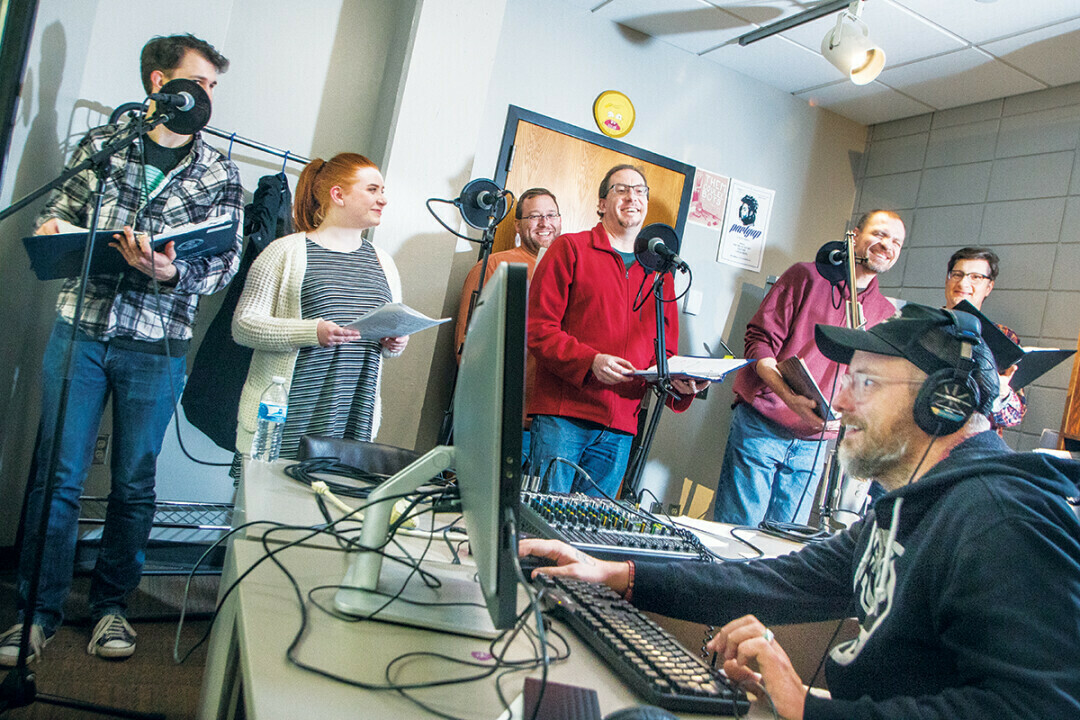 Actors recorded  Bend in the River, an original radio play, in the studio of what was then known as Blugold Radio in 2018. (Photo by Andrea Paulseth)

Still – losing the heart, personality, and community-forward ethos of a purely local Chippewa Valley presence on Chippewa Valley radio waves – in exchange for a niche station based in a different city – hurts. The decision to go dark may have come down to dollars and cents, but that doesn’t take into account the invaluable and intangible contributions to the community at large, support structures for local bands and artists, or outlets for all kinds of creatives … contributions that will hopefully continue with or without the call letters.

Since the summer of 2016 – when Mid-West Family Broadcasting donated the station to the UWEC Foundation – what was then known as Blugold Radio, then Verge Radio, then Converge Radio did many objectively cool things in this community that couldn’t have happened without them.

Converge Radio’s on-air programming for locals, by locals, included original shows like Tunes From The Womb, Local Independence, and The Tomme Suab Experience that often highlighted the work of local musicians side by side with national artists, placing the arts of the Chippewa Valley in the broader context of popular music.

“In our case, we are building radio playlists mixing a plethora of Eau Claire music across genres with complimentary music from around the region and world,” Scott Morfitt, then station manager, wrote in Volume One in 2016, as the station was first taking off. “Basically, we want to celebrate this very special scene and share its vibrancy and depth to all.”

In collaborative partnerships with other local groups like the Chippewa Valley Writers Guild, Converge produced radio plays like Oddly Enough and Bend In The River. And more recently, podcasts like Conversations In Color and Passion Pod found their homes and cultivated audiences on Converge.

The downtown Eau Claire speakers on Barstow Street now play local tunes thanks to Converge Radio. And in a collaborative project with UWEC public history students, the station also helped archive and digitize a widely diverse and exhaustive recorded history of music made in Eau Claire.

In an altruistic effort a couple of years ago, the station even recorded videos of performances for more than 20 local bands and artists to submit to NPR’s Tiny Desk Concert contest.

Providing opportunities for students, giving artists a shot, fostering a strong community around music, and building up local creatives has been Converge Radio’s bread and butter since day one. 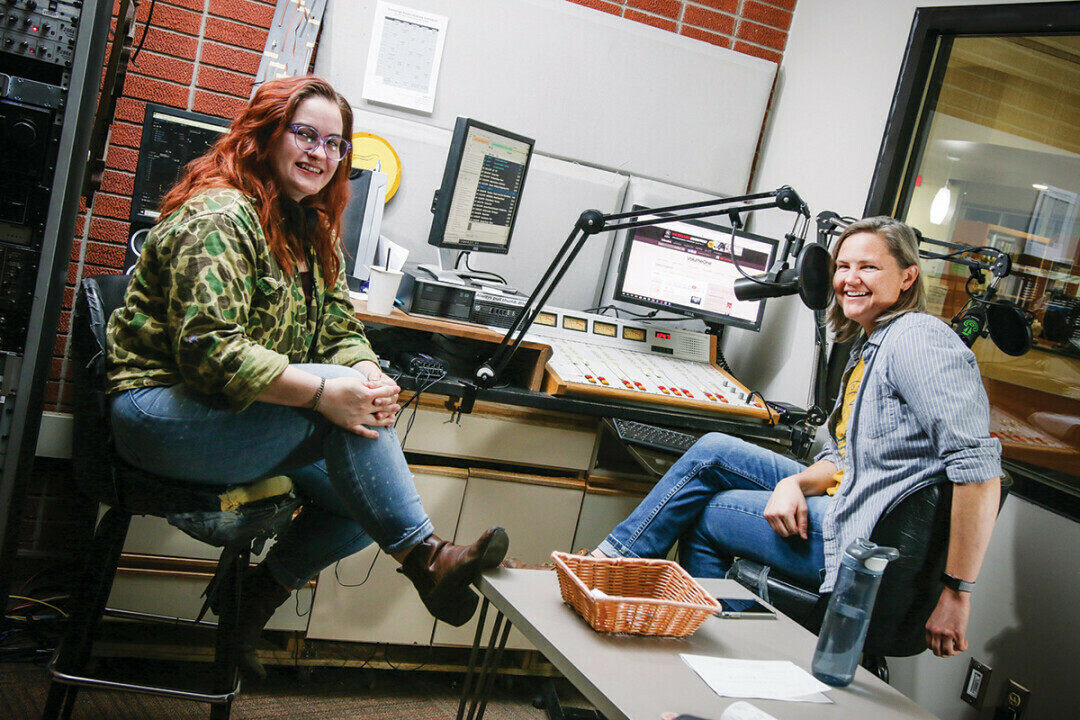 Tunes From The Womb is a radio show on Converge hosted by Jerrika Mighelle, right, and produced by Kessa Albright, playing tunes from women and LGBTQ+ artists. (Photo by Andrea Paulseth)

That’s perhaps felt most acutely in the station’s live music efforts. Converge Radio sponsored or produced dozens of shows at almost as many venues in the Valley and beyond, bringing people together under the same roof to celebrate a love of music. Converge shows regularly popped off at venues like The Plus, The Metro, Pablo Center, The Lismore, libraries around the Valley, not to mention their monthly spot at Xpeditions Coffee Company in Bloomer.

The station made music happen in the unlikeliest of places too: The patio of Haymarket Landing, Riverside Theater (a theater in-the-round at UWEC), the “Baroque” sculpture on the banks of the Chippewa River, and the now-defunct Toy Car recording studio.

Converge broadcasted live from the Eaux Claires Music & Arts Festival as well as the Blue Ox Music Festival. During Eau Claire’s Fourth of July fireworks in 2018, the station streamed a live score by Justin Vernon (Bon Iver), Aaron Dessner (The National), and a group of local bandmates.

In its own right, Converge Radio was the driving force behind its own festival of sorts, Prex Claires – a massive smattering of concerts at different venues all across downtown Eau Claire on the night before Eaux Claires, three years in a row.

Four years seems brief, but the station’s accomplishments over that time period, frankly, speak for themselves. It’s indicative of the fearless passion and hard work put in day-in-and-day-out by the Converge Radio staff over the years.

So while the station’s days on 99.9 are coming to an end, here’s hoping that same passion goes to work in this next phase for Converge – and for this music-making, art-loving community of ours.