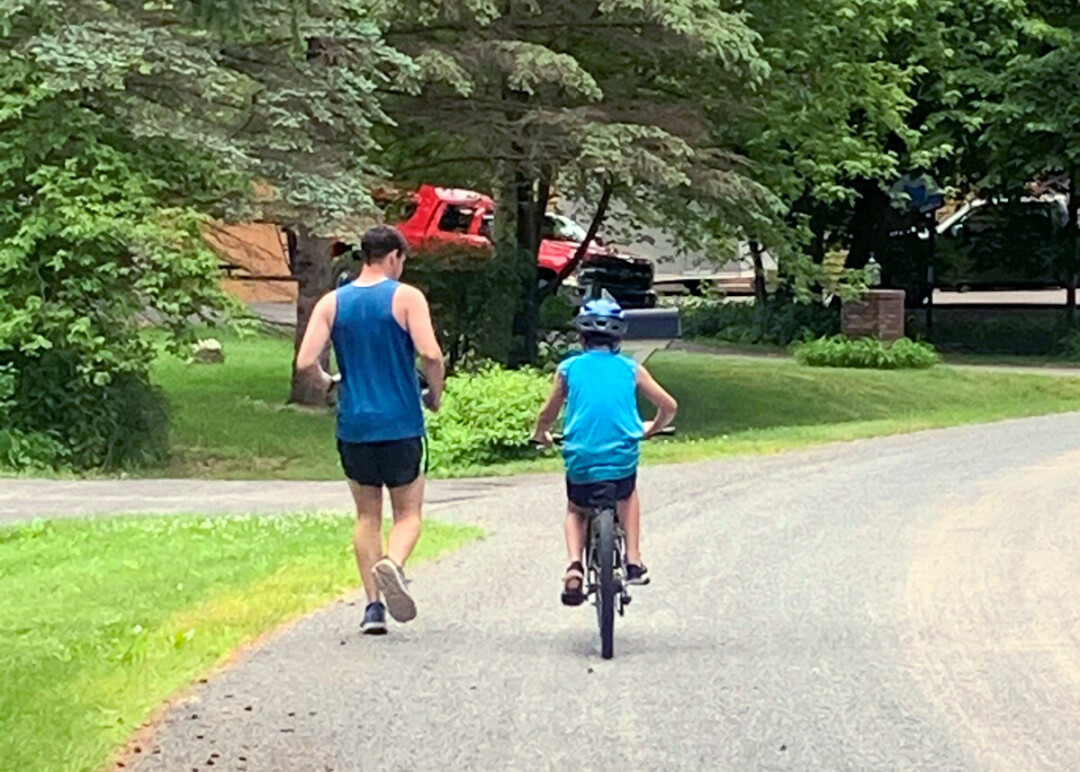 ONE FOOT IN FRONT OF THE OTHER. The writer and his son hit the trail. (Submitted photo)

It was while running that I first began to grasp the seriousness of COVID-19. More specifically, I was on a treadmill in the basement of the McPhee Center at UW-Eau Claire on a frigid February morning. I ran as members of the UWEC football team bench pressed, squatted, and curled in anticipation of a season many months in the future. Through my earbuds a reporter from The New York Times spoke of a virus that originated in China that had made its way to the United States. A global pandemic was imminent, the reporter warned, and the likelihood of hundreds of thousands of deaths was high.

Clueless about proper pandemic procedures, I fist-bumped a sweaty football player as he walked by. Neither of us knew then that his senior season might never come.

I tend to listen to a lot of podcasts while running. It’s a way for me to stay up-to-date on current events. When schools shuttered in the spring, however, my podcast time turned into parenting time. Upon lacing up my shoes for a late March run, my 10-year-old son asked if he could ride his bike along with me. “Sure,” I replied. And he has joined me on nearly every one of my runs since. One of the few perks of the pandemic has been that I have gotten to spend more time with my family, and these runs were something we both looked forward to.

The yard placards that popped up along our path over the months marked the passage of time like chapters in the history book that is sure to be written: Altoona HS Class of 2020 – In This Together; Black Lives Matter; Trump 2020; Biden 2020. All provided opportunities for social studies lessons. 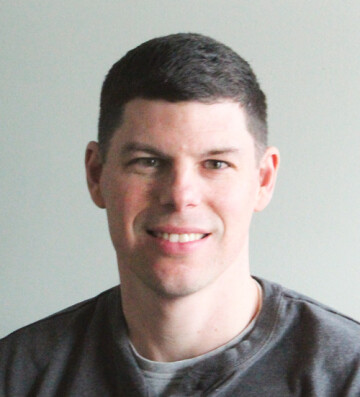 We typically had between 45 and 90 minutes to ourselves on these every-other-day outings. We’d talk about whatever came to his mind: frogs, Harry Potter, or whether it would be warm enough that day to go swimming. Sometimes I brought up more serious subjects. The yard placards that popped up along our path over the months marked the passage of time like chapters in the history book that is sure to be written: Altoona HS Class of 2020 – In This Together; Black Lives Matter; Trump 2020; Biden 2020. All provided opportunities for social studies lessons. It’s one thing to hear someone talk about current events via podcast, quite another to be confronted with evidence around every corner.

When we ran out of discussion topics, my son would improvise a story involving some precarious situation that we found ourselves in. Nearly all had a Swiss Family Robinson vibe; we were marooned in some strange place doing what was necessary to survive. Sometimes magic was involved. Often, we were animals. Recently, he was a turtle and I was a pine marten and we were living on an island with a flood about to overtake everything. We climbed the tallest tree to escape the rising water. I’ve never known a turtle that could climb a tree, but in my son’s imaginary world anything was possible. I suppose grave fantasies are a good distraction from the uncertain, though equally ominous, realities in which we are currently living.

We regularly see the same friendly faces out on the trail: the walkers, runners, and bikers. Depending on when we go out, we might pass more pooches than people. Some are tethered to a tree in their yards, barking as we go by, while most are out enjoying a stroll with a companion. There’s a middle-aged man with two large dogs attached to his waist. And a small blind dog just up the road who always pulls his owner in our direction as we pass. There’s also a Great Dane who’s eye-to-eye with my boy on his bike.

Our exercise and conversation was also often interrupted by other, less domesticated creatures. We see lots of squirrels, rabbits, and deer. The other day it was a family of turkeys. We occasionally stop to inspect all manner of insect: wooly bears, Gypsy Moth caterpillars, large spiders. One afternoon early in the summer there was a painted turtle trying to cross the road. The boy stopped and helped her get to the other side. Two days later the turtle was back, this time crushed on the center line. The best PPE in the natural world can’t protect from inattentive unnatural hazards. If only there had been a tree to climb.

These aren’t fast runs, more tortoise than hare. At some point in the middle of the summer, though, the city installed one of those digital radar speed detector signs along our usual route. This created a regular opportunity for a mid-run sprint. On his bike my son was able to reach 19mph. On two feet the best I could muster was 12. During a normal summer I’d participate in a half dozen local 5k or 10k races, with one or two half-marathons sprinkled in. But this summer is far from normal. Nearly all the regular races have been cancelled. I did participate in a “virtual” half-marathon. While the starting gun and spectators were absent, the pavement, elevated heart rate, and ticking stopwatch were decidedly present. And so was my partner, eager to offer encouragement – or a sip of Gatorade – when needed. Over an hour into it we encountered misaligned sprinklers irrigating the asphalt and headed straight for them. It’ll be the closest we’ll come to Wisconsin Dells this year.

Now it’s back to school, so this morning I ran alone for the first time in six months. The voices in my earbuds are talking about the challenges of returning to school amid a pandemic. The soundtrack includes parents screaming at school district leaders tasked with making impossible decisions. Out on the trail I see a few of the usual dogs, some rabbits, and two deer. I also see a number of students waiting at the end of their driveways for the bus. Some waved. All were properly masked. Maybe the future history book won’t be so dystopian after all.

Justin Patchin is a Chippewa Valley resident, a father, and a professor of criminal justice at UW-Eau Claire.