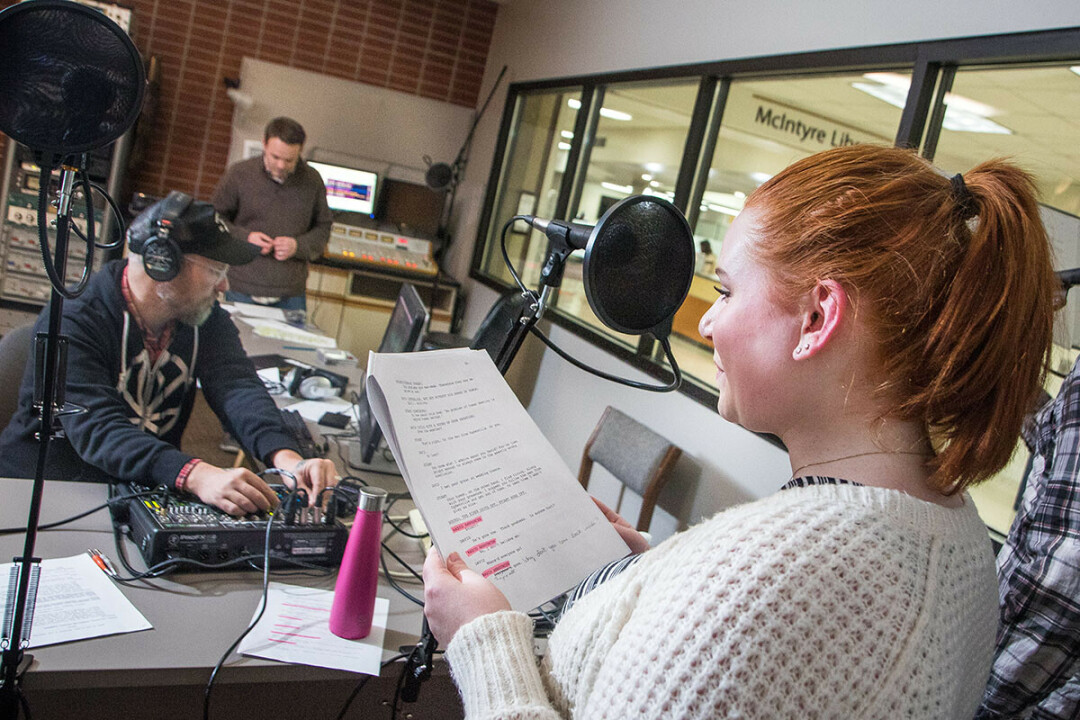 Actors recorded "Bend in the River," an original radio play, in the studio of what was then known as Blugold Radio in 2018.

The station – legally known as WDRK-FM – has operated from the UW-Eau Claire campus since 2016, first as Blugold Radio and more recently as Converge Radio. Its owner, Blugold Radio LLC – a subsidiary of the UW-Eau Claire Foundation – has sold the station’s license, call letters, and tower (which is near Cornell) to the Family Radio Network for $280,300, according to documents released by the Federal Communications Commission.

However, it’s possible that Converge Radio could continue in some form – likely streaming online – said Kimera Way, executive director of Blugold Radio LLC and president of the UWEC Foundation. The foundation, she said, is early in the process of negotiating a transfer of Converge Radio to another entity.

Converge Radio posted a statement about the situation on its Facebook page Friday:

Friends, you may have heard that Converge Radio is going away. Let us state this very clearly … IT IS NOT! It is alive and well and we have big dreams. In the next few months, we will cease broadcasting on 99.9FM, but our programming will continue on the Converge website and the TuneIn app. AND, we are researching potential broadcasting possibilities. We believe the best is yet to come for Converge and hope you’ll take this ride with us!

We also want to take a moment to thank the University Foundation at UWEC for their support of the station over the last four+ years. Quite literally, if it wasn’t for the Foundation’s financial backing, Converge would have died before it was born. The great future we’re envisioning is possible only because of that support.

When this transition happens, the Foundation will no longer be a part of Converge Radio and the station will have no official connection to the University. I believe this change is positive for all parties. We will always be thankful for the Foundation and UWEC.

Stick with us, Converge Fam… seriously, great things await us!

In the meantime, Converge Radio will continue to operate in the same way until the FCC approves the transition, which likely won’t occur until the end of the year.

According to a Thursday press release, selling the license will allow the UWEC Foundation “to concentrate on its core mission of student recruitment, retention, and success.”

In an interview Thursday, Way stressed that the sale was not a reflection on the quality of Converge Radio’s programming or staff. “It’s been a hard decision,” she said. “We’re really proud of the programming.” The station has carved out a devoted audience, brought indie and local music to the airwaves, and provided educational opportunities for students, some of whom have gone on to broadcasting jobs, she said.

However, Way added, the decision to sell was ultimately a financial one: “We just never were able to find out niche in terms of generating advertising support and sponsorship in the way we needed.” The UWEC Foundation’s board decided last fall that Converge Radio would be sold if a sustainable funding source couldn’t be found. “We had a good plan, I thought, but then COVID happened,” she said.

And at the same time the pandemic was undermining the Converge Radio’s revenue, Family Radio Network approached the foundation about buying the station. The network already operates four full-power stations and six FM translator stations in Wisconsin, Radio + Television Business Report said in an article Wednesday.

According to FCC documents, the sale did not include Converge Radio’s on-campus studio or any of its broadcast content. In addition to broadcasting at 99.9 FM in the Chippewa Valley, the station streams online at convergeradio.org.

Converge plays a mix of indie and local music and also carries a number of unique locally produced programs, including Conversations in Color (which is devoted to issues related to race in western Wisconsin), Local Independence, Tunes from the Womb, Jazz, Blues and Beyond, The Tomme Suab Experience, and more.

In 2016, Mid-West Family Broadcasting donated WDRK-FM (including the station’s license, call letters, and tower) to the UW-Eau Claire Foundation. The donation was valued at $1 million at the time, a university press release stated. WDRK had previously been a commercial station, originally known as The Carp when it went on the air in 2001 and later as BOB FM and then Greatest Hits 99.9.

Way praised the station’s employees and volunteers for “creating unique and community-centered programming.”

“However,” she said, “with all that has happened since early in 2020, the Foundation board and staff have been evaluating our resource deployment. Our core mission is to provide resources – financial and staffing – that ensure strength in student recruitment, retention, and success.”