THE REAR END: Zooms All Day 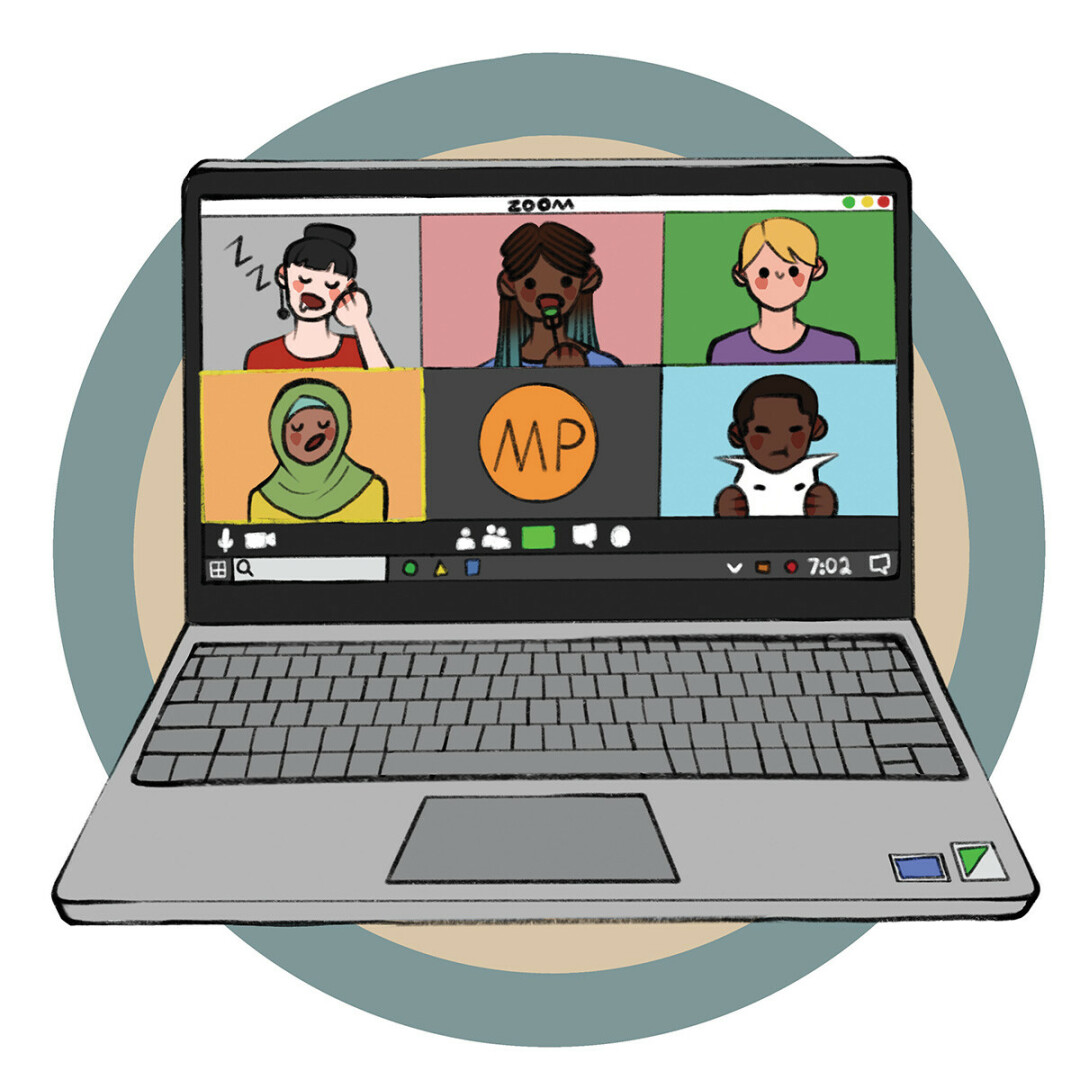 We can all admit that when we’re in a Zoom meeting we’re all just looking at ourselves, right? At this point, we can all say that out loud, can’t we?

I see you doing it. I see myself doing it. Oh sure, we’re listening, we’re engaged, we’re contributing to the conversation, but a nice chunk of our attention is devoted to checking out our own hair.
And when we’re not checking out our own image in the little video gallery of co-workers, co-committee members, co-students, and/or co-1970s-barbarian-fantasy-book-club-members, we’re scanning everyone else’s background for hints at their daily life. Some people might post up in an office for their video calls (boring), but some people are in their living rooms or kitchens or bedrooms and that’s where they keep the good stuff. You can tell a lot about a person by how many giant Anne Geddes posters they have hanging over their bed.

Oh sure, we’re listening, we’re engaged, we’re contributing to the conversation, but a nice chunk of our attention is devoted to checking out our own hair.

Yep, if Google can be trusted, Anne Geddes is still alive and she was born in Australia. And her books have been translated into 23 different languages, which isn’t that impressive considering they’re mostly filled with photos of chubby babies poorly disguised as root vegetables.*

My very obvious point is that, for many of us, Zoom is now a part of everyday life. And by “Zoom,” I also mean Microsoft Teams, Google Meet, Webex, Skype, ZoHo, TeamViewer, Eyez-n-Earz, VideeoTalkr, DiscourseBlastr, FaceChatPersonalIntrusion, and I’m just making these up off the top of my head. “Zoom” is truly the Kleenex of our day and age.

We now have little setup routines for these video calls, and if you’re like me – rugged, handsome, and the dad/husband in a family of four – you have multiple routines for multiple people on multiple devices and platforms in multiple parts of your house, and you’re all constantly asking each other, “Please lower your speaking volume so I can hear this nice lady talk about the very important things.”

We all know more about proper camera lighting than all the area’s high school A/V clubs combined. For example, I know not to schedule a meeting at a certain time in the morning or the sun blasts through a certain window near our computer, and my entire face turns a shade of white I call “holy angel vengeance fire.”

Speaking of angels, my kids have taken to these video meetings fairly well, intuitively knowing what icons to tap to get the stuff doing the things. I’ve been in the room during their virtual class times, and people, if you’re one of those thoughtless blowhards who think teachers have it easy, I challenge you to do the same. I’d last roughly 10 seconds as a virtual elementary school teacher. Without fail, there’s always one kid who doesn’t shut off their mic, and they hold their tablet in their grubby little hands, so every tiny little movement is transmogrified into a blasting symphony of scraping sounds and discordant clattering.

Imagine trying to speak to youngsters over an iPad (probably with a slight delay) while glass bottles are being poured into a metal dumpster, and you are sitting in the metal dumpster.
Let’s hear it for our teachers.

Adults have their own tests and trials when it comes to coworkers who can’t figure out how to stop very loud phone calls from coming in during meetings, or they position their tablets on a table so the camera is basically shooting straight up their nose. Or they say things like, “Well jeez, I got the Zooms all day today!”**

But as my ol’ college math professor once said, “Everything’s hard until you know how to do it.”
And that’s a good mantra to keep in mind right now. It’s good to be patient with each other and ourselves until we know how to do this stuff. Because video meetings should be the least of our worries.
I’m lucky to have a computing device with a camera. I’m lucky to have a reasonably solid internet connection. I’m lucky in that my family can use these tools to learn and work when so many others don’t have the options they deserve.

* If you don’t know who Anne Geddes is, look her up, because that paragraph was hilarious.
** This is an actual quote from someone I know with an extremely heavy Wisconsin accent.