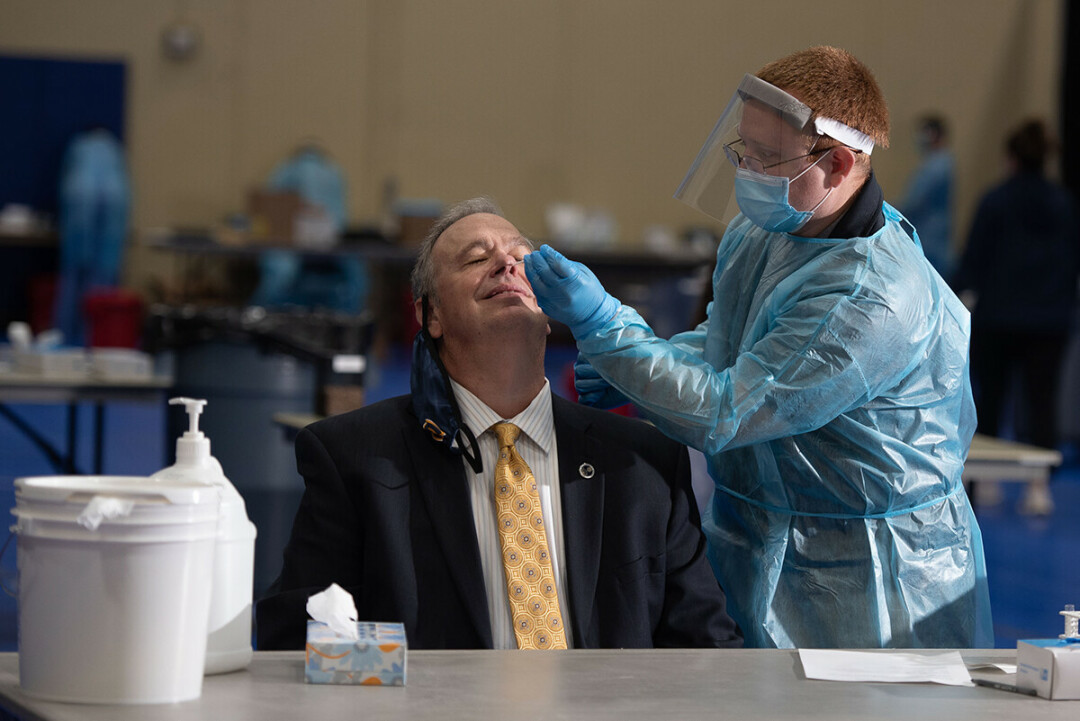 UW-Eau Claire Chancellor James Schmidt received an antigen test for COVID-19 this week. The test is similar to what all students in UWEC residence halls will undergo on a rotating schedule. The chancellor's test was negative. (UWEC photo)

Eau Claire County just experienced its largest surge in COVID-19 cases since the pandemic began, and about half of them are among UW-Eau Claire students and staff, health officials say.

As of Wednesday, Eau Claire County had a total of 1,037 diagnosed cases of the coronavirus, an increase of 199 from seven days earlier, Eau Claire City-County Health Department Director Lieske Giese said during an online media briefing.

By contrast, as recently as three weeks ago, there were only 67 new cases countywide in a seven-day period.

“Certainly the volume was considerably higher than probably all of us thought was going to happen those first few days.” –Lieske Giese, Eau Claire City-County Health Department

The total number of cases in Eau Claire County grew 24% in week leading up to Wednesday (compared with 8% statewide), and rose 39% in the previous two weeks (versus 15% statewide).

While a spike in diagnosed cases since UWEC students returned to campus for the fall semester wasn’t a surprise, “Certainly the volume was considerably higher than probably all of us thought was going to happen those first few days,” Giese said.

“But we knew that the more we brought people together and the more that we closely monitored symptoms – which is what’s happening at UW-Eau Claire, CVTC, and in the K-12 system – the more symptoms would be identified and the more testing that would happen,” she added.

And while more testing leads to more diagnoses, Giese added, it also increases the chances the spread of the virus will be slowed.

Of the 199 cases diagnosed over the Labor Day weekend, 55% were affiliated with UWEC, Giese said.

The university had previously announced that as of Sunday, 69 students had tested positive for the virus, 17 of whom lived on campus. “Six of the students who tested positive may have had interactions with other students in their residence hall,” the university said Monday. “As a result, UW-Eau Claire has placed six residence hall wings into full quarantine, affecting 184 students.”

One bright spot: It doesn’t appear any of the UWEC-related COVID-19 cases were related to close contacts in the classroom, Giese said. Instead, social gatherings were the biggest risk factor, she said.

Since the pandemic began, 48.4% of all Eau Claire County COVID-19 cases have been among people 20-29 years of age, compared with 25% among the same age group statewide.

And while many young people may experience only mild symptoms from COVID-19, they may also spread it to older friends, relatives, and coworkers, Giese noted.

“The goal of this asymptomatic testing is to find any student who may be contagious, and not know it, to help with their behaviors to reduce the spread of the disease,” Thesing-Ritter says.

“As a student, I would be pleased to have the opportunity to have this test at no cost to help stop the spread on campus. It also identifies cases as quickly as possible so students can be placed in isolation.”

Meanwhile, Giese – the health department director – said coronavirus cases have also been identified in some area K-12 schools. However, Giese said, the health department wasn’t planning on reporting specific data by school or school district. Instead, if there is a potential virus exposure at a school, families will be notified directly, she said.

Countywide, 866 of the 1,037 people who tested positive for the virus are estimated to have recovered. Over all, 41 county residents have been hospitalized because of COVID-19 and six have died.

There have been 83,334 confirmed cases statewide, including 389 in Chippewa County and 208 in Dunn County.