Nothing Happened and Everything Did

socially-distant reflections from aboard the Patti barge 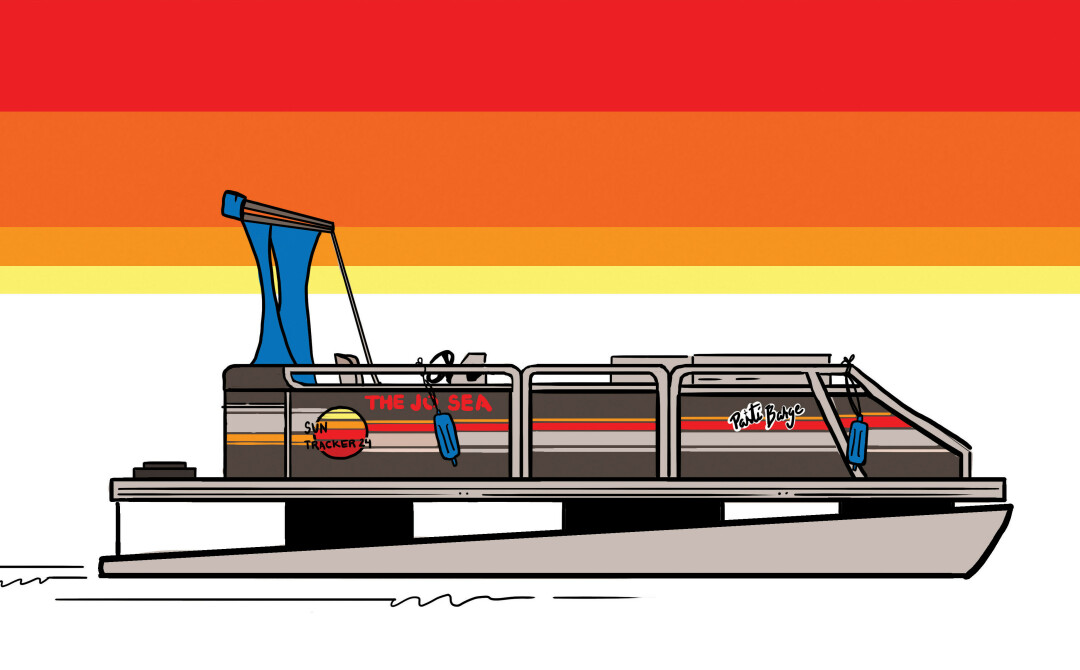 How will we remember the summer of 2020: a time when nothing happened or everything did? Here on Lake Hallie it was our summer of social distancing on a “party barge” – an oxymoron, I know. I came to own a 24-foot pontoon the same way I acquired my first pair of jeans and my first car: hand-me-down. This summer my 1987 Sun Tracker has been the go-to gathering place for family and friends, just a few at a time. My husband calls it the “Patti Barge.” Guests sit on the front benches and Bruce and I sit at the other end, well over six feet apart.

We are both in vulnerable groups, a phrase that meant nothing to me five months ago, like that other expression I’ve come to despise: the new normal. The Chippewa Valley was on a coronavirus pause through May, and by June we hit “play” again. We often get together with folks who take similar precautions. Quick trips to grocery or drug stores with faces covered. My asthmatic sister and her grandson picnic and fish on the pontoon. The high school friend I see once a year gets dropped off for an afternoon booze cruise for two.

As we chug along Lake Hallie, Noah says, “It’s weird just to be” – he pauses and looks around – “out.”

I feel safe hosting simply because of the pontoon’s size. Before Bruce’s son visits us, Noah goes for a COVID-19 swab within an hour of arriving in Eau Claire from the Democratic Republic of the Congo, where he lives. Two days later: negative test results. Bruce holds Noah in a bear hug and says, “No, I’m not letting go.”

Noah comes home about every six months, but this trip we feel especially fortunate to have him here. Since March he has been isolating in a compound with his wife, a United Nations migration official in charge of coronavirus relief for the Congo, a country that vigilantly fights Ebola outbreaks.

As we chug along Lake Hallie, Noah says, “It’s weird just to be” – he pauses and looks around – “out.” He talks for an hour straight.

Bruce has taught me that we can’t constantly worry over adult children. Still he tells me the litany of dangers he thinks about for Noah: measles and kidnapping, malaria and rebel groups, Dengue Fever and armed conflict in the streets, parasitic worms. As a mother, I have my own list. No matter how old our children, if we can name the threats we may keep them away.

A few weeks ago my nephew and his pregnant wife visited for a pontoon ride. A first baby is an exciting but scary time for everyone. In the midst of a pandemic? Really frightening. Twenty-nine summers ago, four days after bringing my son home from the hospital, Jeffrey Dahmer was arrested. While I held my newborn close, I watched those unimaginable horrors unfold on the nightly news, a lesson in how bliss and devastation coexist in the world, as they always have.

Tonight before Mitch and Abby arrive, Bruce warns me we are not cruising far from home with a woman who is almost nine months along. He gets his wish. My outboard is wonky, so the four of us sit on the pontoon docked in front of our house – a little like camping in the backyard but still fun. We have drinks and watch the eagles dive into Lake Hallie for their dinner. I hand Abby the baby card I made with pictures of infant Mitch and a childhood one of his dad (my brother) and his grandfather (my dad). Earlier today I looked through my jumble of old photographs and considered what was going on in the world for these four generations of Sees. The Great Depression, four wars, a polio epidemic, assassinations of leaders, the Civil Rights Movement. There were many other terrors and struggles, but like most Americans my family posed for the camera, then carried on.

Every day the world as we knew it seems to fall apart a little bit more, still Mitch and Abby’s Griffin David See (and many other babies like him) made his way here anyway.