‘Made at UW-Stout’ door pullers part of campus safety push 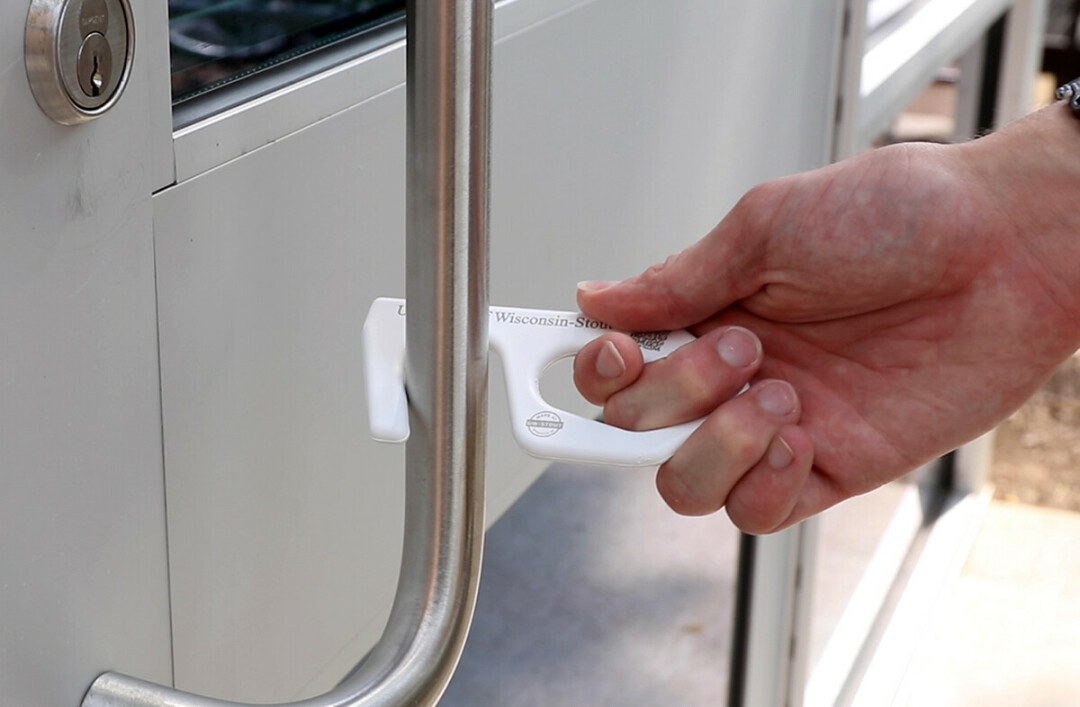 The Made at UW-Stout door puller is less than five inches long and weighs less than an ounce. (UW-Stout photos by Chris Cooper)

At UW-Stout this fall, dozens of COVID-19 safety measures – from new plexiglass barriers to surface disinfection protocols to socially-distanced classrooms and lounges – have been planned and implemented to help keep everyone healthy.

The university’s commitment also includes something out of the ordinary: a narrow, molded plastic tool distributed in welcome packs to residence hall students. Simple as it looks, it has a sort of superpower.

The device is a hand-held door puller, designed to hook handles and open doors in classroom buildings, residence halls, and more, meaning that students can use it to greatly reduce the number of times each day that they touch commonly used surfaces.

For this small but powerful – even life-saving – piece of engineering, new students can largely credit two of their peers, fellow students Jake Thomas and Deven McCarty.

“I’m happy I can make a difference, put my engineering knowledge to use and make students’ lives a little better,” said Thomas, the inventor, a senior engineering technology major from Northfield, Minnesota.

Thomas made a door puller early this summer at home on a 3D printer. It came at the request of his father, who works in technology for a Minnesota school district. Once word got out at UW-Stout, where Thomas works as an Admissions tour guide, the idea took off.

Soon, there will be 3,000 of Thomas’ door pullers on campus. “It’s wild that this all started in my bedroom,” he said. 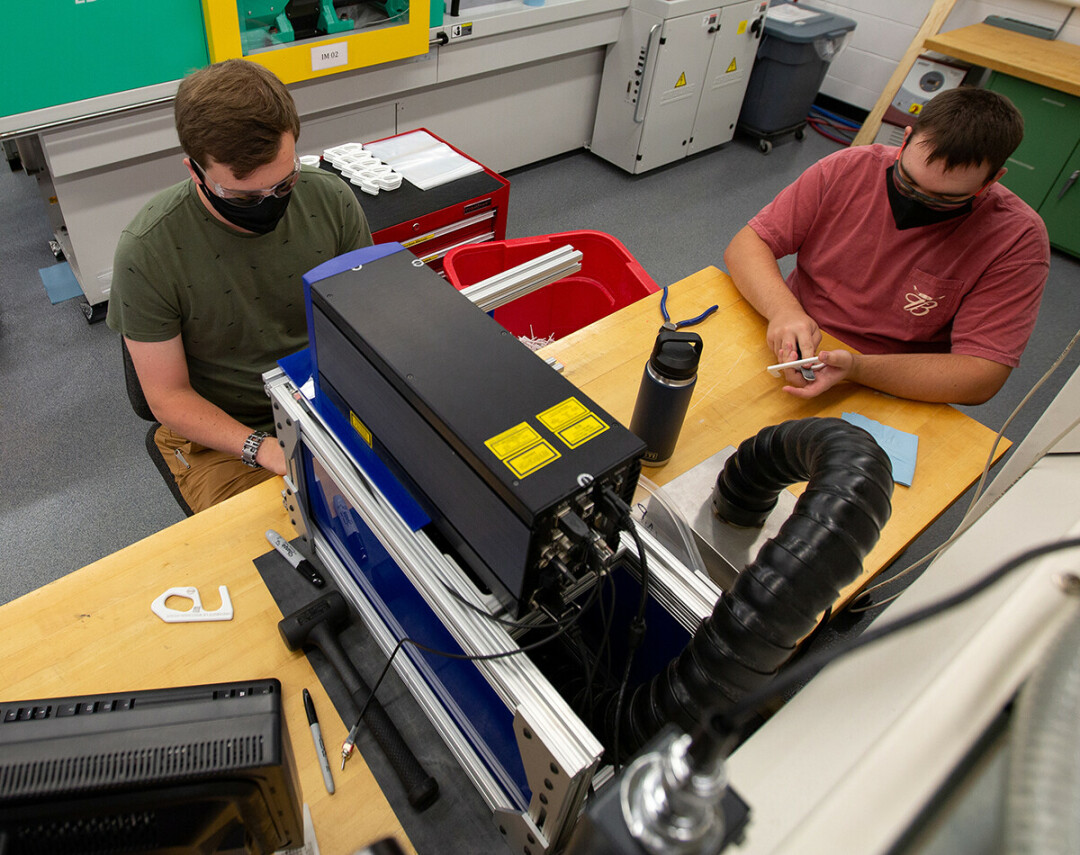 Senior engineering students Jake Thomas, left, and Deven McCarty work on Made at UW-Stout door pullers in the plastics engineering lab. Thomas designed the tool, being given to residence hall students, and McCarty helped engineer it.

McCarty is a senior plastics engineering major who refined the design for production in the university’s plastics lab in Jarvis Hall Tech Wing. “Whatever I can do big or small to hopefully see this virus go away is a win in my eyes,” said McCarty, from Dyckesville, northeast of Green Bay.

Along with student know-how, the project benefited from several of the plastics engineering program’s industry partners:

Professor Adam Kramschuster, who helped secure the donations and provided expertise with the production process, is proud of how it all came together over a couple months before classes begin Wednesday, Sept. 9.

“The high-tech equipment already available in the plastics engineering laboratory, along with the skillsets students develop in their coursework, provided the groundwork for a successful project,” Kramschuster said.

He said injection molding was chosen to make the tools because of its cost-effectiveness and ability to produce complex 3D shapes that look good.

The door puller includes the “Made at UW-Stout” logo, highlighting a campus-wide initiative to highlight unique products designed, prototyped and produced on campus as part of the applied learning focus. The puller also includes a QR code that links to a web page to learn more about the project.

“We are fortunate to have a strong collaborative network on campus where faculty, staff, and students engage in Made at UW-Stout projects,” said Ann Parsons, interim associate dean of the College of Science, Technology, Engineering, Mathematics, and Management.

“Branding the door puller as Made at UW-Stout gives long lasting testimony to the capabilities that exist in-house and the shared responsibility we all have for our community. The project is a great example of how our UW-Stout community supports our students and introduces their products to the marketplace,” Parsons said. 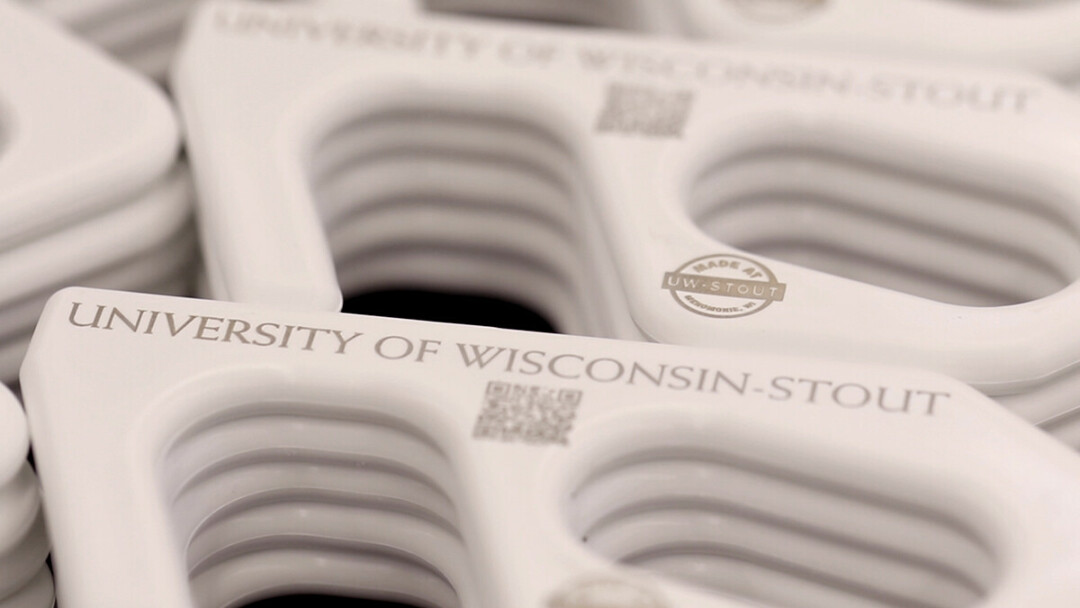 The Made at UW-Stout door pullers will help students open doors on campus without touching the handles during the pandemic.

It all started with a question by Jake Thomas’ father, John, who opens a lot of doors with his school district technology job.

“Touching and wiping down doors takes a lot of time. I asked Jake about making some kind of puller I could put on a lanyard. He seeks out things to design and fabricate,” John said. “We talked about it on a Saturday afternoon. He had a design within a few hours and had one 3D printed by Sunday night.”

Jake had saved up for his first 3D printer about seven years ago in middle school and subsequently turned his closet into a workbench. He was co-captain of his Northfield High School FIRST robotics team.

“We have a silly expression in our house: You have to use your ‘superpowers’ for good. I love that he’s taking his skills and helping others,” John said.

Jake researched the idea online and developed his prototype, which his dad still uses but which is more than twice as thick as the finished Made at UW-Stout model. The final product is 4.9 inches long, 2.23 inches high and a quarter-inch thick, weighing less than one ounce.

In between that first model and the finished one, Jake refined his idea and made about 20 of them for Admissions staff at UW-Stout. He used knowledge from classes such as Impacts of Engineering and Engineering Graphics Applications to research, design and test his idea, including how many pounds of force are needed to open a typical campus door.

Word of his idea began to spread across campus. When the decision was made to make the door pullers as a welcome gift for new students, Jake saw the project take on a whole new life with cost analysis, the Made at UW-Stout aspect, mold-making and a production schedule, all of which put him in contact with faculty and administrators, including making a pitch to Chancellor Katherine P. Frank.

Jake and his new project partner, McCarty, oversaw the production process, and they learned from each other’s engineering skillsets.

The aluminum mold based on McCarty’s work was milled in UW-Stout’s machine shop in Fryklund Hall by Paul Craig, manufacturing engineering instructor.

Most of McCarty’s work was online and involved virtual meetings because of the pandemic.

“The first thing that excited me about this project is that it would challenge what I have learned so far in my classes. It was a good test to see what I am good at and what I need to work on,” McCarty said.

Both students said the project essentially took the place of their summer internships, which were canceled because of COVID-19. “I was the project engineer at a ‘contract manufacturer’ and learned a lot of things that will help me transition into working in industry once I graduate,” McCarty said.

Jake said the experience represents why he fell in love with UW-Stout.

“I wanted a school with engineering and a hands-on focus. I love learning through seeing and doing. This project has been a testing ground for me. The engineer in me came out.”