A ‘Burning Love’ for Style

Blue Suede Studio spreads joy, one haircut at a time 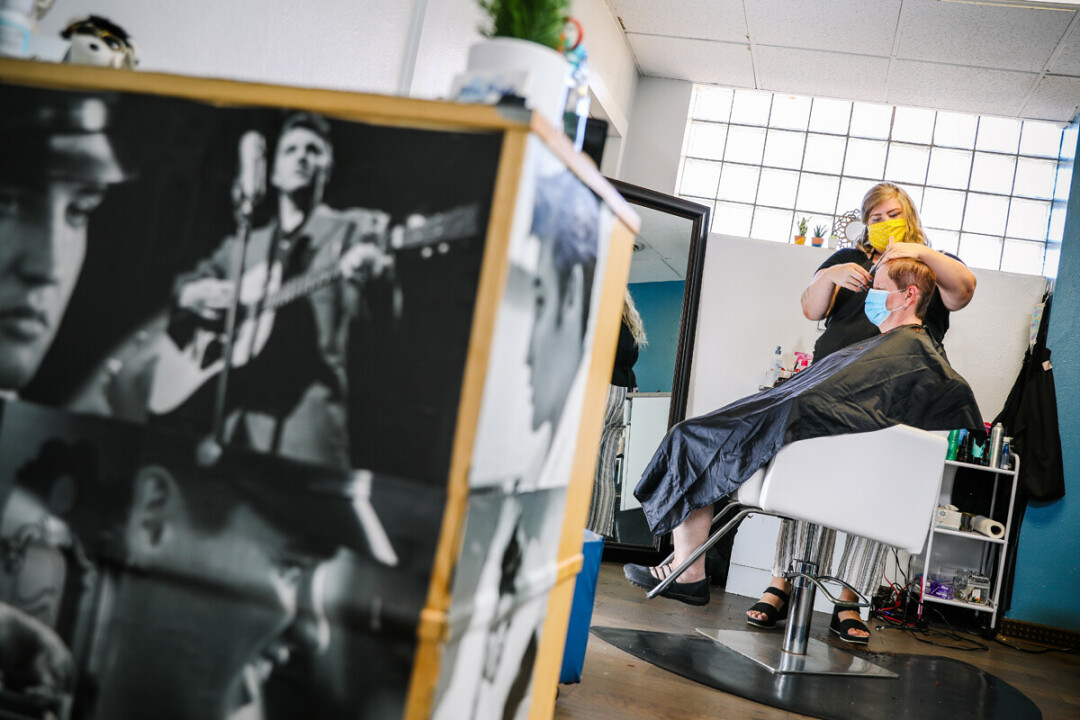 Being able to combine career, passion, and serving others is not easy. But Sara Shellenberger’s skills in cosmetology allow her to do all three. In the second week of March, Shellenberger opened her own hair studio after sharing a studio space with others for several years.

“When I see a smile on someone else’s face,
that’s what makes me super happy.”
– Sara Shellenberger, owner of Blue Suede Studio

She was forced to shut down when the pandemic hit soon after she opened, but Shellenberger spent that time wisely, redecorating and painting her studio. She also dealt with depression during that time and was thankful for support from family and friends. The thrill of opening followed by being forced to close right away was a big letdown.

Aside from her career, Shellenberger has also used her hair and makeup skills for more than 18 years with the Eau Claire Children’s Theatre – her passion. In the past, she acted in performances quite often, but now limits herself to acting once or twice a year. This year, she acted in and created wigs for Disenchanted, which was a live-streamed performance with face masks.

Shellenberger also uses her abilities to serve others by giving haircuts to senior citizens at London Square Apartments. “I love being able to connect with people of all ages,” she says. Having a haircut means a lot to the seniors, allowing them to feel beautiful without leaving the comfort of their homes.

Shellenberger says that the life that she lives now, one of following her passions and serving the community, began when she was a sophomore in high school and had just moved to Eau Claire. After moving around a lot while she was young, Eau Claire finally became home. Shellenberger says her whole family is still in the area, including some extended family who moved later. She has chosen to stay here because Eau Claire is “such a beautiful, warm and welcoming city… (there’s) nowhere else I’d want to call home.”

Shellenberger is a hard worker – maintaining her new studio, doing hair and makeup for the theater, and serving others. What keeps her going is the joy of it.

“When I see a smile on someone else’s face,” Shellenberger says, “that’s what makes me super happy.”

To find out more about Blue Suede Studio, find them on Facebook or email Sara Shellenberger at hairbysara1986@gmail.com.