When Summer is Going, Going, Gone 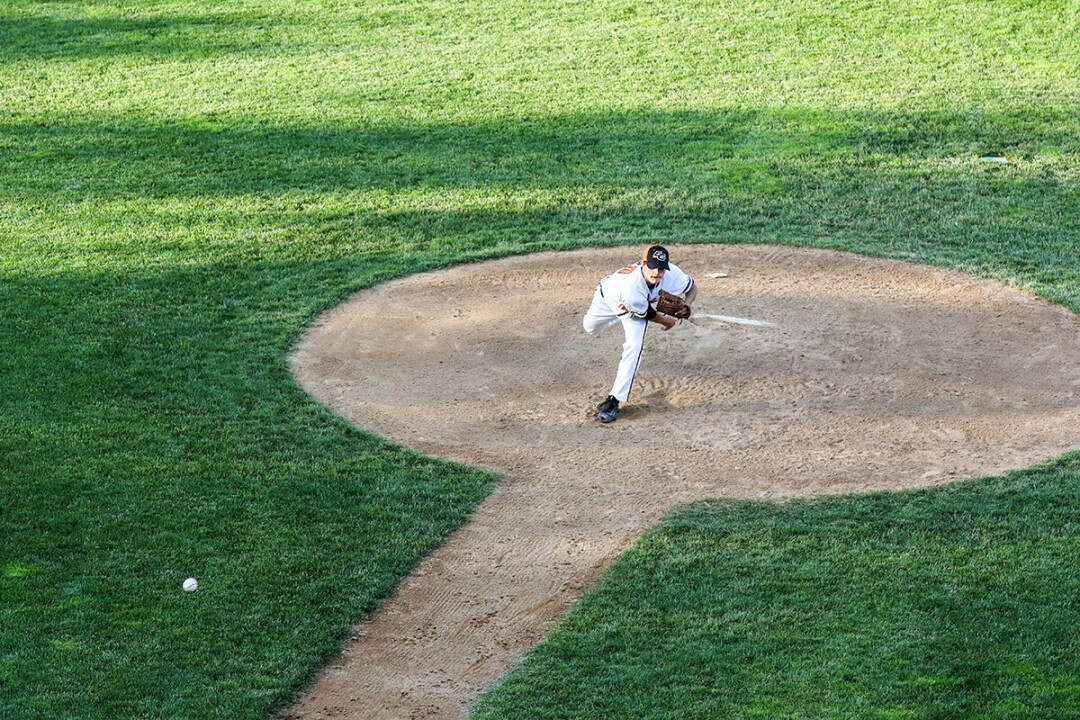 The summer of 2019 was the summer of great expectations: outdoor concerts, long-distance Frisbee in the vacant lot, lakeside campfires, s’mores, lightning bugs, and endless summer magic.

But summers had begun to change around our house. As our kids got older, I feared the wonder years were fading. I saw it in a swing set that sat vacant more often than not. I saw it in kids who preferred their screens to outdoor adventures. Even when the ice cream man rang his bell through the neighborhood, our 12-year-old no longer sprinted out the door with his little brother. At 12, he was still interested, but he realized it wasn’t an emergency. Walking would suffice.

Many have noted that my expectations often run idealistically high, and reality rarely measures up. Temper the expectations, and one won’t be disappointed.By mid-August, the backyard ferns were wilted and brown. The Summer Bucket List had been replaced by the Wisconsin Reality List: heat and humidity, mosquitoes and gnats. Where was the summer everyone else was posting about on social media?

That’s a smart game plan, which may be why I never adopted it.

We needed something to turn this wayward ship around.

“Who wants to go to the Express game tonight?” I asked late one evening.

“We could get ice cream at the concession stand,” I added.

The crowd was, dare I say, buzzing with excitement. The energy was, dare I say, palpable. Some of these fans had been there all season. We’d only been there for an inning. Even though we weren’t as invested, there was plenty of room on the bandwagon.

My eight-year-old son, Evan, agreed. We slipped on our shoes and headed out the door. The evening air had turned cool; humidity levels were finally merciful. While Evan was no longer interested in the bounce house, the last time we went he enjoyed getting autographs from the players. He brought the same ball with high hopes. We parked the car and approached Carson Park stadium – a beacon on a hill, surrounded by Half Moon Lake. It’s a stone-built classic, constructed during the Great Depression, in faith of better days ahead. The players run on similar faith, playing all summer long, dreaming of getting drafted into the minor leagues.

This happened to be a late-August playoff game, and we entered the stadium (for free!) in the middle of the eighth inning. We got ice cream and a spot under the grandstand. It seemed half of Eau Claire was at the game: happy to be packed in, sitting shoulder to shoulder, back when crowds weren’t something to avoid. Together, we could feel the collective power in a couple of thousand people focused on the same small action, rooting for the same outcome. None of us knew the next season would be canceled, that this would be the last game played at Carson Park indefinitely.

The Express had a 2-0 lead late in this divisional playoff game, and the crowd was in a great mood. As part of their nightly tradition, they played “Sweet Caroline” leading into the ninth inning.

I’ve grown tired of that song over the years, but, on that night, I got caught up in the ballpark spirit.

When it gets to the chorus, and Neil Diamond sings, “Sweeeet Car-o-line,” the whole crowd typically sings the “BAHM-BAHM-BAHMMM!” But a guy near us brought an air horn, and he had several beers or was supremely confident, and he blared that thing along to the BAHM-BAHM-BAHMMM! It was hilarious gross-overkill, and my son was beside himself with laughter. And the second time around the chorus, with another round of air horn blasts, Evan laughed even harder. Two times with a joke like that seemed plenty. For my son, though, jokes get funnier with repetition. And Evan’s hard laughter is contagious. “Do you think he’ll do it again?” he asked. When the chorus rolled around again, sure enough air horn guy did his thing: BAHM-BAHM-BAHMMM! Evan’s whole body shook with laughter, and mine did, too. 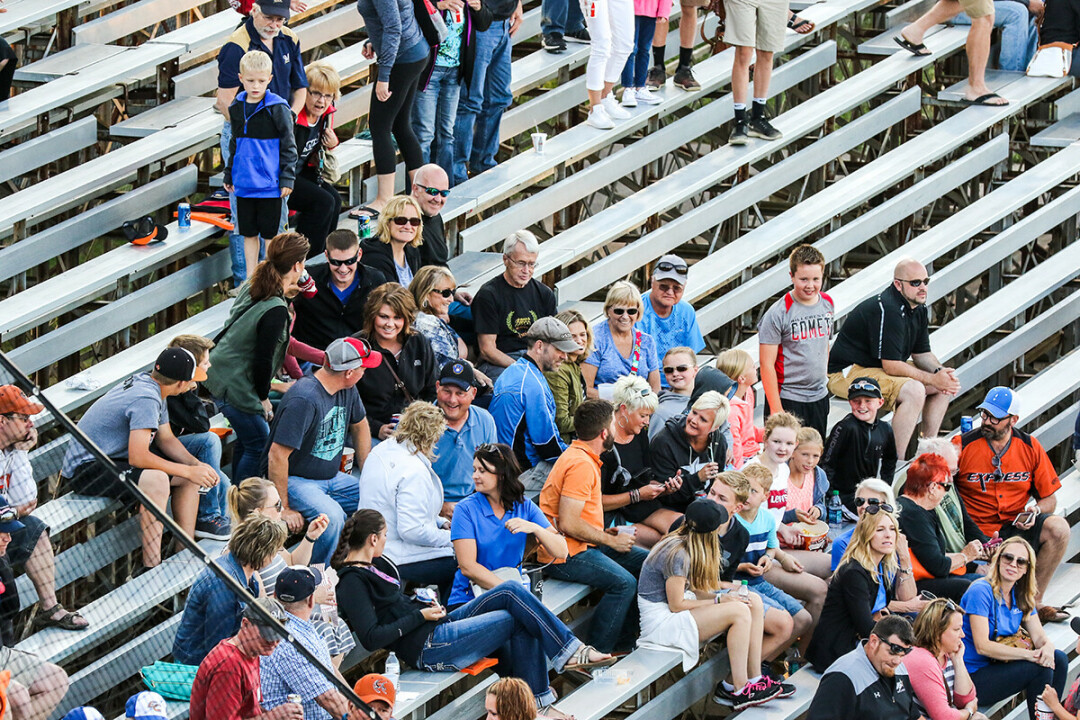 The song faded out for the top of the ninth. The Express were three outs away from beating the Wilmar Stingers and winning the Great Plains Championship Title. The crowd was, dare I say, buzzing with excitement. The energy was, dare I say, palpable. Some of these fans had been there all season. We’d only been there for an inning. Even though we weren’t as invested, there was plenty of room on the bandwagon.

The first two batters each grounded out in routine plays.

Two outs! One more out and we’d be moving on to the single-game Northwoods League World Series.

The crowd rose to its feet. Baseball can be such a slow crawl; I was glad Evan got to experience this rare crescendo.

The pitcher looked ready to shut this thing down, and he fired a fastball right down the pipe for strike one.

Another fastball, another swing and a miss, strike two! The crowd could taste victory.

With no balls and two strikes, everyone took the noise to peak volume.

Two foul balls in a row deflated the energy, but as the pitcher got back on the mound, there was a sense that the Stingers’ final thread of hope was about to be cut. As the pitcher stared the batter down, the crowd slow-clapped, rising to a thunderous wall of noise.

The wind up and the pitch…swing and a miss! Strike three! Struck him out!

The crowd roared. The Express players charged from the dugout, and the whole team mobbed the pitcher. The announcer let us know again that “The Express are Great Plains Division Champions and heading to the Northwoods League Summer Collegiate World Series where they will take on the Traverse City Pit Spitters.”

After a couple of minutes of hugs and high-fives, the players cleared the field for the post-game fireworks celebration. Someone hit the stadium lights, and – much to the chagrin of the surrounding neighborhoods – we were treated to a full Fourth of July fireworks show in the middle of August. Our faces glowed as explosions lit up the black canvas sky.

When the grand finale ended, Evan wanted to take his baseball and try to get more autographs. He couldn’t name a single player, but that didn’t matter. Evan believed that these Express players were celebrities, and the kids crowding the fence by the exit tunnel reinforced this impression. He joined them, packed in tight. They extended their arms toward the players –waving pens, baseballs, and hats. And as the Express players walked out of the tunnel past the kids, they stopped and signed all the baseballs and ball caps they could. And, God bless ’em, they didn’t act like autographing kids’ baseballs was a chore. They were still new at this, so there were no vacant stares, no sighing, no eye rolling. It was all “Hey buddy, what’s your name?” “Did you have a good time tonight?” “Thanks for coming out!”

After the last autograph was signed, and most of the fans were on the road home, we decided it was time. This was it. The World Series was a single game – an away game. So for us, this was the end for live baseball in 2019.

As we walked through the concession area, we saw one last player walking through the empty concourse hall. “Want to see if he’ll sign your ball?” I asked. Evan shyly approached him with his baseball, holding it up from mortal to god. This player was happy to sign it but had to search hard for an empty spot. “You got a lot of autographs here,” he said.

“We might have to get another ball,” I joked.

He finished signing and said, “Wait here.” Then he sprinted off.

We waited near the boarded-up concession stand. The stadium, not long before packed so full that the crowd could be heard a mile away, was now silent enough to hear crickets chirping.

After a couple minutes, I wondered if he forgot about us. Then he came running back. “Here you go buddy,” he said, handing Evan a brand new baseball, stamped with the official Eau Claire Express logo.

Evan stood there in disbelief – yet with proof in his hands. Then Mr. Eau Claire Express, like a summertime Santa Claus, disappeared into the night.

And it was time for us to do the same. As the last two fans to leave, we had no trouble spotting our car in the parking lot.

What a way to end it. In hindsight, Neil Diamond was right. Good times never seemed so good.

Ken Szymanski is a father, teacher, frequent Volume One contributor, and Writer-in-Residence for the City of Eau Claire.