one intrepid writer eats a ton of corned beef over St. Paddy’s Day weekend ... for the sake of journalism

“Input corned beef, output words.” It’s a joke some Volume One staff members have made about my massive and undying love for pickled beef brisket. This love was born in childhood, during which I often consumed fully half of any corned beef my mother slow-cooked for the family. It was violated after marriage by my husband who, when assigned to cook one, removed the spice packet and replaced it with his own blend of cinnamon-nutmeg nonsense. Bless his heart. For those of you not familiar, it’s a traditional Irish dish of salty beef brisket usually served with carrots, boiled cabbage, and potatoes. And I do hope you become familiar with it soon. Check your favorite grocery store; they should be on sale now! Why are they on sale? Because they’re a St. Patrick’s Day staple, and just like Christmas candy on Dec. 26, it’s time to clear out the extras! It’s a magical time of year, folks. I’ve lost track of the point. Which is that, in a fit of passion, I went to five different restaurants on St. Paddy’s Day weekend and ate five delicious servings of corned beef. Turns out there’s tons of places in the Chippewa Valley that serve up slabs of the stuff for the occasion – I don’t think I even got to half of them!  But it was equal parts religious and marathonic.

Excited to get started, I scheduled my first meal for my lunch hour. 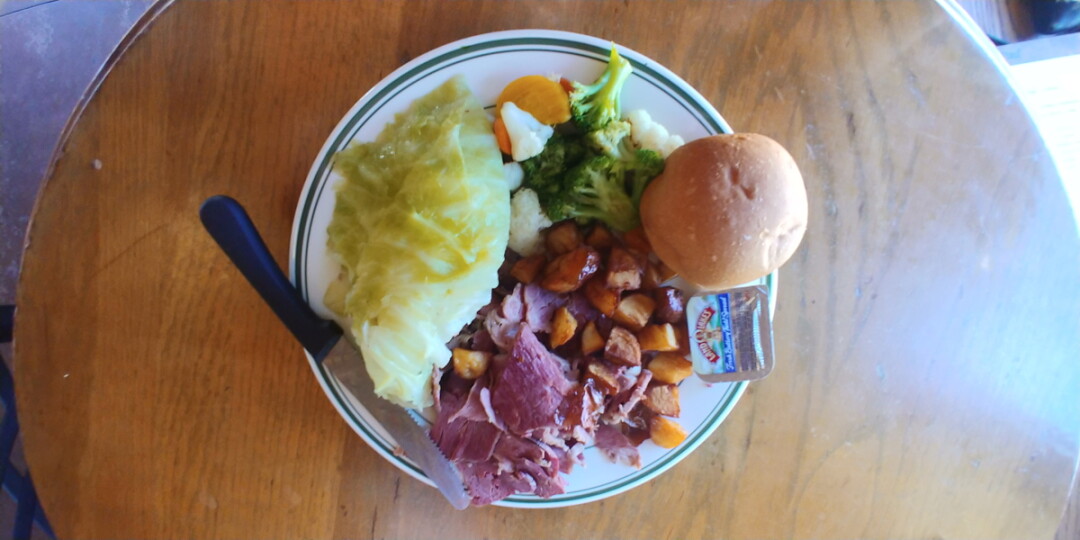 My first stop on this journey was to Dooley’s Pub in Eau Claire Friday afternoon. Corned beef is standard on their menu, along with bangers and mash, Irish stew, fish and chips, and shepherd’s pie. With green knots painted onto the tables and neon shamrocks lighting the bar, no decorating is necessary to prepare for St. Paddy’s. Corned beef at Dooley’s comes with a hunk of boiled cabbage half the size of your head, mixed steamed veggies, breakfast potatoes, and a roll. For starters, this is a FULL plate of food. I’ve never finished the entire dish. The brisket was sliced both with and against the grain, and it was properly tender. All-in-all, a filling lunch in a friendly atmosphere, and a good start to the weekend. 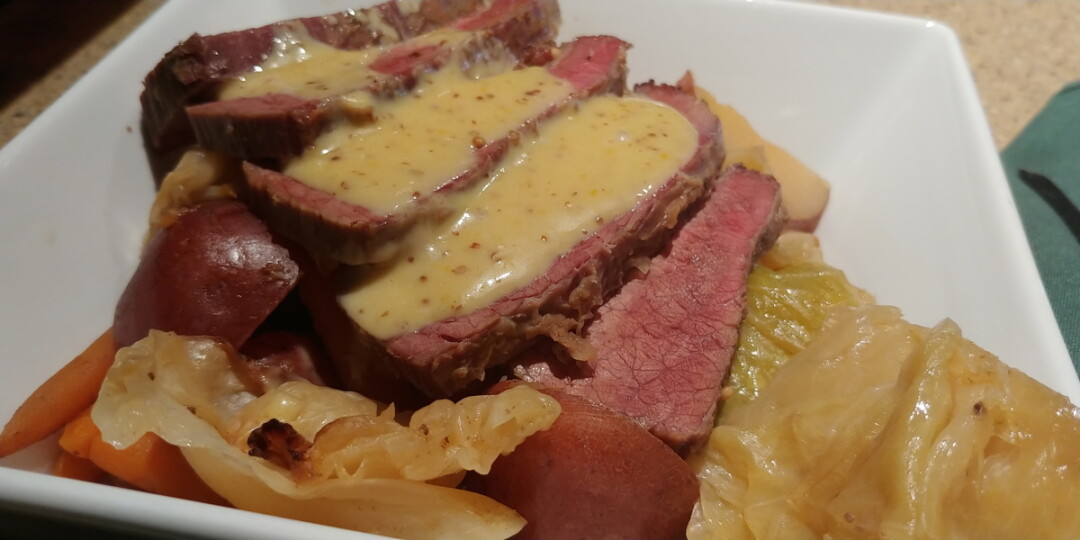 When this meal arrived at my table, I was taken aback by how beautiful it was.  Four thick slices of cross-cut corned beef fanned out over boiled cabbage, red potatoes, and baby carrots. A generous drizzle of dijon mustard completed the dish. The meat itself was a gorgeous gradient of pink and fiery mauve. It was almost too pretty to eat…  almost. While the choice in sides was strictly traditional, this meal was probably the most adventurous of the weekend. There was very little fat on the meat, which had a bit of bite to it  (less a la mode and more al dente). The vegetables were cooked just right, and had an unexpected zesty flavor. All this was consumed from a booth with a view of the venue, which filled with families as I ate.  Ella Fitzgerald tunes crooned over the speakers. What a pleasant dining experience.

Husband joined me Saturday to offer his perspective on the local corned beef offerings.  Yes, I did let him come with even after the spice packet incident. 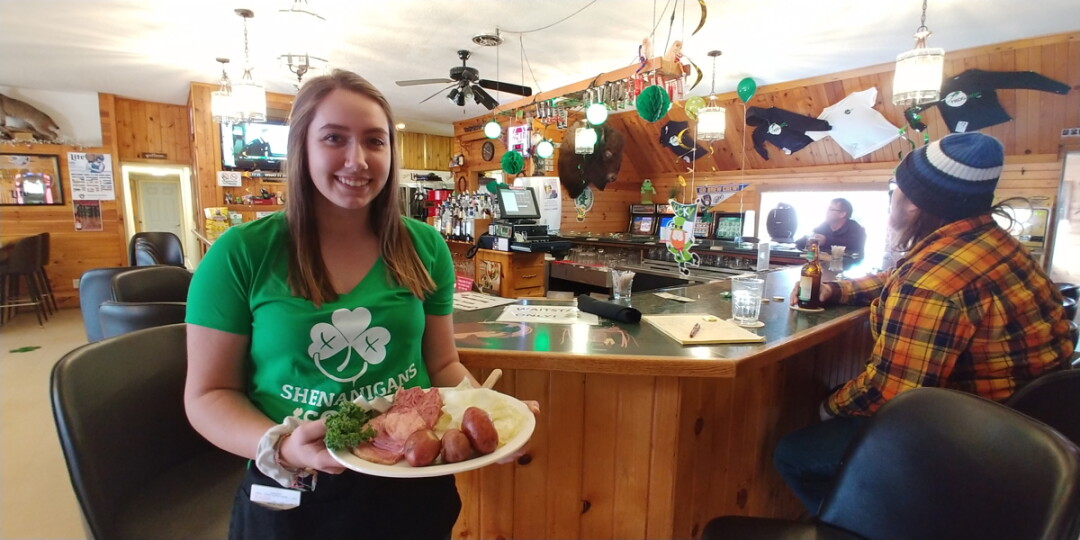 Behind the scenes on Saturday evening, a kitchen crew was slicing up beef in preparation of what was expected to be a full house at Frog Hop. They were just finishing up cooking when I arrived at the green streamer-wrapped banquet hall. The staff had set out beads for guests to grab, and shamrocks hung from the lamps above the bar. The real showstopper at Frog Hop was the potatoes – my husband, who joined me for the last three stops, agreed. Delicious reds cooked to buttery perfection. I could tell from the feel of the fork gliding through the tuber that I was in for a treat. The beef had a good, salty flavor, and was cut with the grain but easy to separate.  Owner Eric Eslinger chatted with patrons at the bar as we ate, and people started filtering in for a night of celebration. Later on there would be live country and Irish music.

Three beefs in, I was beginning to question my fortitude – and even my love for the dish? – but on I trudged, and I was rewarded for my commitment. 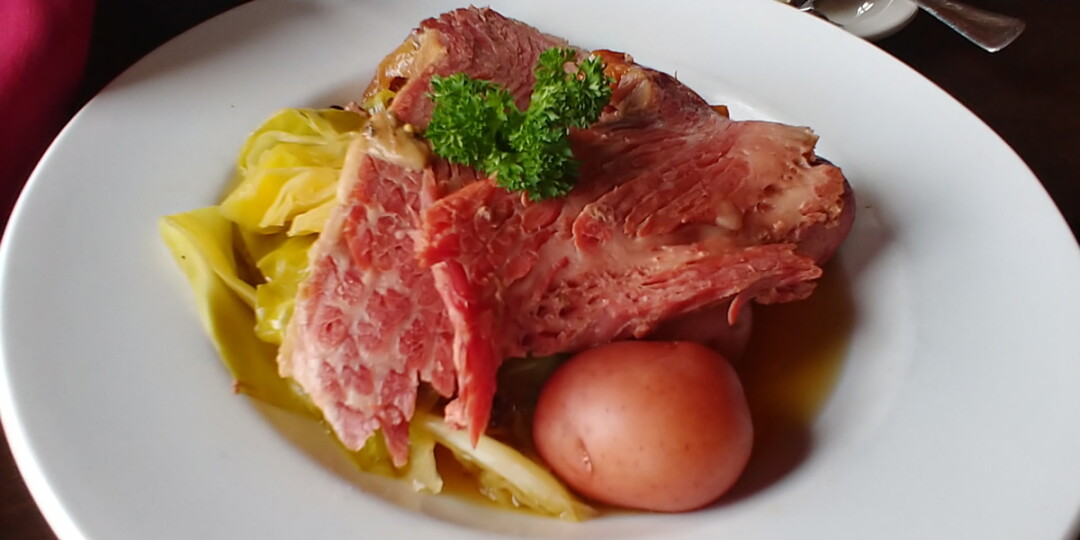 I’ve spent a good deal of time just a short walk from Jake’s Supper Club, but never managed to eat there. That’s going to change after my St Paddy’s Day corned beef experience at the classy-but-friendly venue. Johnny Dildy, our server, took the order in a voice like molasses – it was a North Carolina accent, he told me, and I could have listened to him list salad dressings forever. Husband decided to snack on some prime rib bites while I ordered the usual, and I’m so glad he did because if he’d come for this corned beef I might have bit his hand. It arrived in a shallow pool of its own drippings with the traditional fixings and a cup of irish stew.  Cut diagonal to the grain of the brisket, the meat and fat alike melted away in my mouth – I don’t know that I had to chew at all. The carrots, potatoes, and cabbage were all steamed separately, and the beef itself had been cooking for more than 10 hours. Drenched in stock, the cabbage was a distinct pleasure to eat. Owner Peter Gruetzmacher says he eats one bowl when he gets to work on St. Paddy’s day, and one before he goes home for the night. It’s clear why. All this was enjoyed to the rowdy music of the Irish Rovers (and oddly, The Wreck of the Edmund Fitzgerald?), just feet from a green LED-lit bar. 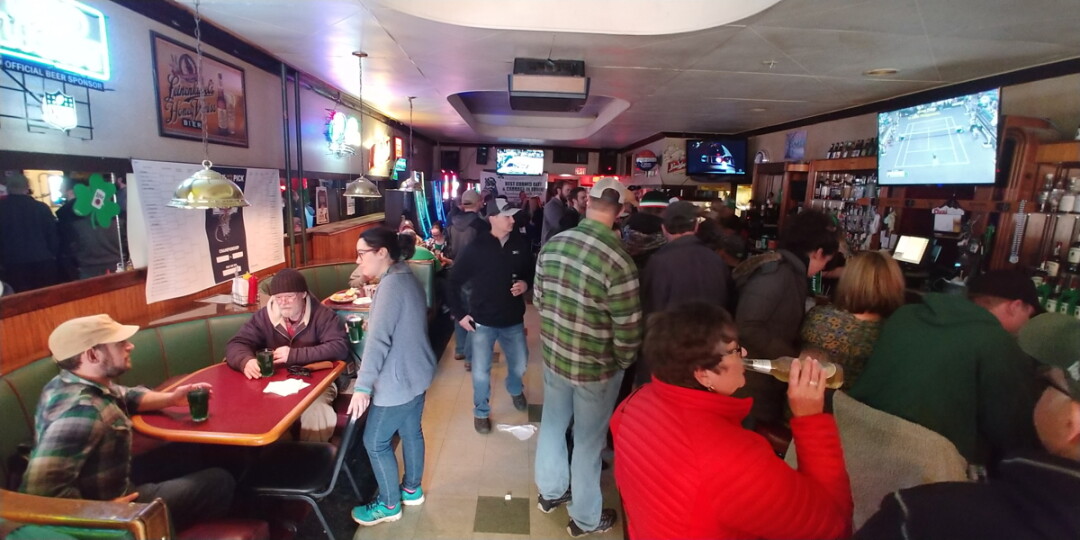 WigWam Tavern has been serving corned beef on St. Patrick’s Day for at least 55 years, and this year posted flyers ahead of their event that boasted it was the “Best in Town.” I had to put this claim to the test. We arrived to a crowded bar at about 2pm (people got their party on early!) and watched as to-go containers flew out of the kitchen window topped with shamrock flags. The booths and tables were full and the bar was packed.  Husband muscled through the crowd to place my corned beef order for takeout – I figured it’d be quicker than trying to sit down for the meal. We listened to more Irish Rovers (and more of the Edmund Fitzgerald?) and watched people drink green beer and Jameson.  Everyone was in great spirits. And while I’m not about to start any brawls by endorsing the Wigwam’s claim, I will say it was VERY good corned beef. Great texture, melt-in-your-mouth fat, served with cabbage, red potatoes with garnish, and a roll. For husband, it was just what he expected from a corned beef – and there’s something to be said for predictability when it comes to a hardy, home-style meal like corned beef. Generous portions and an appropriate cut was a great end to a particularly beefy weekend.

It was a lot of corned beef, and every one was devoured in its entirety. (Although my fervor for Irish fare went unsated: Husband and I went grocery shopping Sunday evening, and he had to pull me away from the display of sale-price corned beef.) But almost better than the amazing flavor of brined meat was the opportunity to travel to the corners of the Valley to partake in a fun tradition, talk to restaurant owners, managers, and servers, and check out new places on a holiday that brings out the good nature in everyone.