Let me tell you about a new romance novel – WAIT– don’t turn the page; this isn’t some bodice ripper or period piece (not that those don’t have their own virtues), and this certainly isn’t a Fifty Shades of Grey clone. Now, if the words “romance novel” didn’t send your fingers running for the corner of the page, don’t worry – this book is still for you, too.

Local author Jared Glovsky’s new book, The Sweet Charm of Distance, has more layers and nuance than many might expect from something in the romance genre. The fact that the book is written from the perspective of the central male character of the piece, Dalton, was enough to catch my attention. And while the romantic focus of the novel, the dynamic between Dalton and Jacqueline, is captivating on its own, it would be a mistake to cast a shallow net.

When asked about his choice to write the book from the perspective of his male lead, Glovsky related that “the male perspective is what got both the attention of my agent and of my publisher. To be honest I didn’t realize it was unique. For me (writing from the male perspective) was just a natural evolution.” The honest emotion held in Dalton’s account is both refreshing and revealing, and to that end Glovsky added, “We’re all equipped at birth with the same complement of emotions. You either grow up socialized to repress them, or the other direction.”

It was during a series of interviews Glovsky did 10 years ago that the idea for the book first took root. Glovsky was then publishing a weekly alternative paper not unlike Volume One called the Lake Superior Sounder, and while interviewing members of the baby boomer generation, Glovsky began to notice a pattern. Describing the interviews, Glovsky explained, “The conversations would always go (back to) them taking stock of their lives. Going through middle age or facing old age. Where things were back when they were young to where they were now.” It was a sentiment that stuck with Glovsky, and he found it was a voice deserving of a stage. 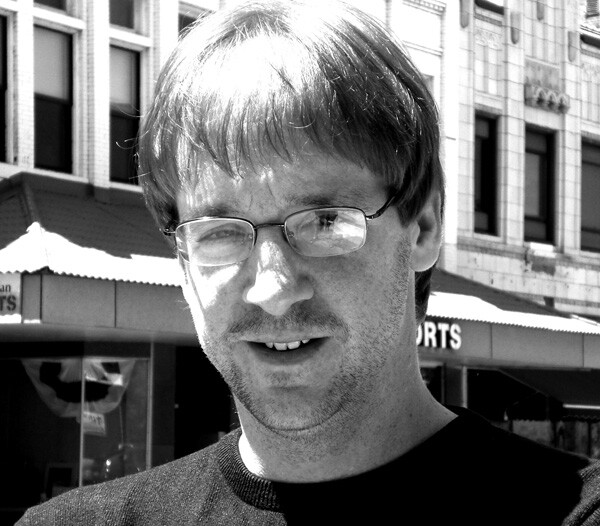 Jacqueline and Dalton are baby boomers through and through, but this book doesn’t offer trumped-up nostalgia for a time gone by. This is a narrative that unfolds in equal measure in both the past and present, and we as readers get the privilege of witnessing these characters and their relationship both in their heyday and in the aftermath. The way Glovsky plays with time is alluded to in the title of the work. “The point, I think, is that there are some things that benefit from distance, and there are some things that don’t. (Dalton) is trying to decide if the past is one of those things that should always be viewed from afar. Different things benefit from some distance, and if you don’t keep the past at a certain distance, it can become present.”

In a culture that glorifies youth, this book is something special. The characters aren’t pigeonholed as a grandparent or a grumpy old man. Dalton and Jacqueline are dynamic, their circumstances unique. An affair rekindled in the wake of grief, affection tinged with regret and hanging uncertainty. No matter your age, you will find something in these two that resonates.

Regardless of how you may feel about romance novels I implore you to give The Sweet Charm of Distance a try. You can pick it up locally at Books-A-Million or at The Local Store, or you can order it online at amazon.com. For more information about the book or its author, check out his website at www.jaredglovsky.com.