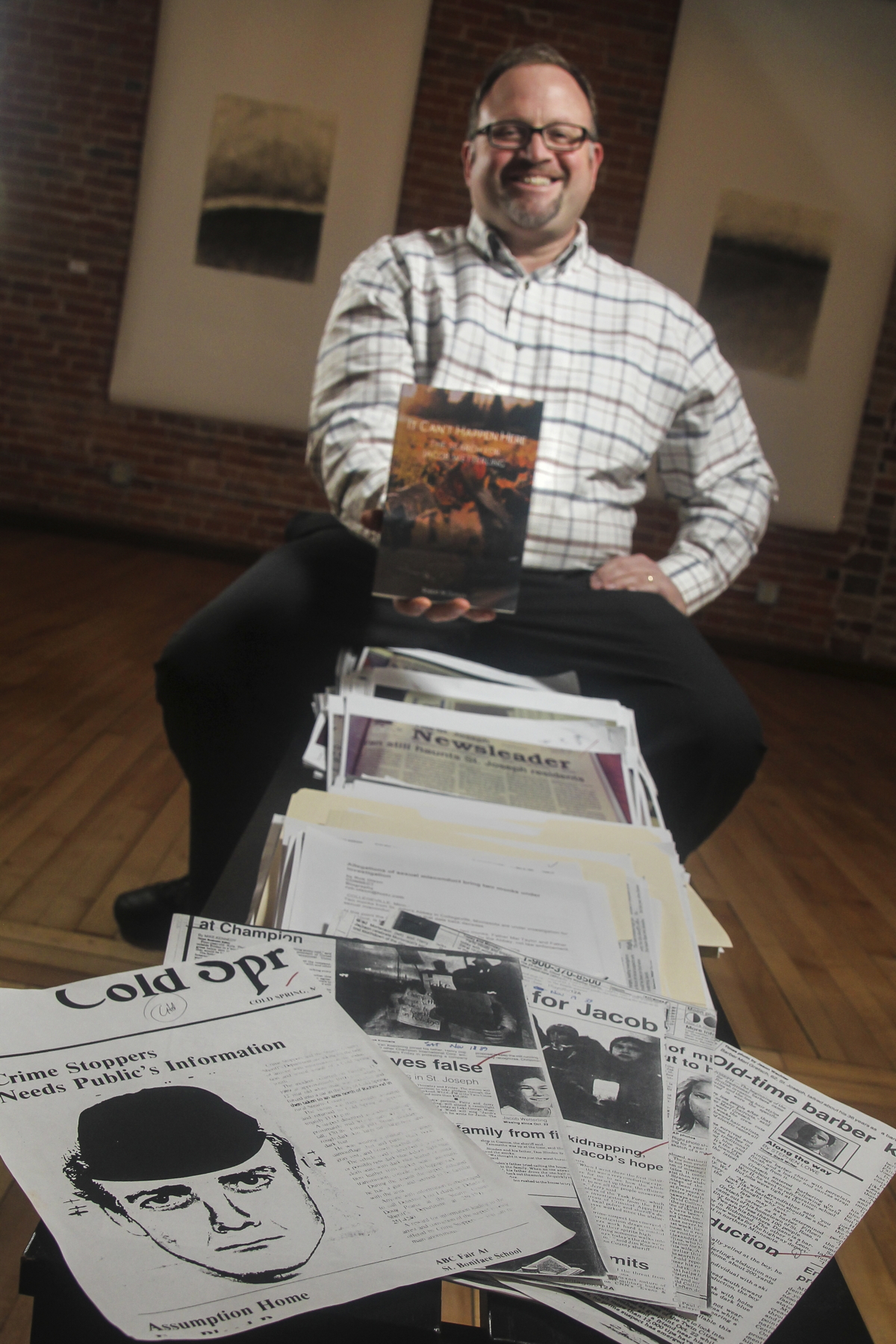 SEARCHING FOR ANSWERS. With exhaustive research, mainly from secondary sources, Eau Claire author Robert Dudley has written a 300-page book on the 1989 abduction of Jacob Wetterling.

Like almost everyone else who was living in the Upper Midwest – and much of the United States – in 1989, Robert Dudley remembers the abduction of Jacob Wetterling well. The 11-year-old’s kidnapping sent ripples that radiated far from the tiny central Minnesota town of St. Joseph, striking fear into the hearts of parents, attracting international attention, and ultimately leading to sex-offender registry laws.

Yet for all the scrutiny, the case remains unsolved. No one has seen Jacob for more than 25 years – at least no one who has spoken publicly – and clues are virtually nonexistent. There has been no evidence and no arrests. Hope for a resolution seems as dim as the moonless October night when Jacob vanished.

Despite its infamy, the Wetterling abduction and its aftermath remain little understood, explains Dudley, who recently self-published a 300-page exploration of the case, It Can’t Happen Here: The Search for Jacob Wetterling. Take Dudley himself: He certainly remembers when the abduction occurred – he was a recently married, recent college graduate in Eau Claire – but he held misconceptions about the case, assuming that the boy had been lost in a crowd and grabbed by an opportunistic stranger.

“There’s a lot of preconceived notions that aren’t true,” Dudley explained in reference to public knowledge about the case – including his own.

It was only in 2010 that a radio report about investigators searching a farm near the Wetterlings’ home piqued Dudley’s interest in the case. He began to investigate it further, and became fascinated.

In the evening of Oct. 22, 1989, Wetterling’s parents were away at a party, and he, his brother, and a friend had biked to a nearby convenience store to rent a video.

“I wanted to put together as many clues, as much information,
as I could, because somebody out there knows something,”– Author Robert Dudley, on the unsolved abduction of Jacob Wetterling

On their way home, they were stopped by a masked, gun-wielding man who told the other two boys to flee and not look back while he led Jacob up a driveway into the darkness. Jacob’s footprints ended abruptly in the dirt near a fresh set of tire tracks. What remained were questions: Had the abductor know the boys and laid in wait? If not, how had he known they were there, considering the incident occurred on an out-of-the-way rural road? And how had abductor and victim disappeared without a trace?

Through exhaustive research, mostly through secondary sources, Dudley explores these questions. He meticulously lays out the details of the abduction and its aftermath, then examines potential suspects. While the only official “person of interest” ever named by law enforcement is a neighbor of the Wetterlings (it was his farm that was searched in 2010), that man he has never been charged. Circumstantial evidence and suspicion have swirled around several others, including a man whom Dudley was surprised to learn was living in Eau Claire in 1989.

Dudley readily admits he is neither a writer nor an investigator by training or vocation; he studied economics and works in business. However, his book is impressive in its thoroughness, and he demonstrates noteworthy investigative skills.

While the Wetterling family didn’t provide input for the book, Dudley said they are aware of it. He stresses he isn’t trying to gain notoriety or wealth with the book: He published it under a pen name, and he plans on giving the proceeds to the National Center for Missing and Exploited Children.

Dudley hopes the book jars someone’s memory or otherwise leads to a resolution in the case. “I wanted to put together as many clues, as much information, as I could, because somebody out there knows something,” he said. “There’s answers out there, but the clock is ticking.”

It Can’t Happen Here: The Search for Jacob Wetterling is for sale at The Local Store, 205 N. Dewey St., and will soon be available online. Visit www.facebook.com/searchingforjacob to learn more.