UPDATE: State Budget Leaves UW System Out in the Cold This much is certain: A proposed $300 million cut in state funding for the UW System will radically change how UW-Eau Claire, UW-Stout, and other state universities operate. It’s uncertain, however, how deep the cut will be on any given campus – or what shape the inevitable staff and program eliminations will take.

The cutback, said to be the biggest in state history, was announced by Gov. Scott Walker in advance of his Feb. 3 budget address, in which he officially unveiled his entire spending plan for 2015-17. Even after the two-year, $68 billion budget was introduced university officials were working to determine what the cuts would mean for individual campuses and the UW System as a whole. (To delve into the budget in more detail, check out the Budget in Brief document online.) Nonetheless, they were girding themselves for the worst.

“I don’t get the luxury of being in my office, sitting around and being as angry as I’d like to be.” – UWEC Chancellor James C. Schmidt, on how faculty members should avoid a “defeatist” attitude in the face of potential state budget cuts

“The cuts that were announced this week are enormous,” a somber UWEC Chancellor James C. Schmidt told a standing-room-only lecture hall filled with equally sullen faculty and staff members on Jan. 29. Schmidt’s address was part grief counseling session, part pep talk. “It feels almost like a death in the family,” he said.

If the proposed cuts are made proportionately to each campus, UWEC could lose $7.5 million to $8 million in each of the next two years, or about 25 percent of its state funding, Schmidt estimated. Whatever its size, the 2015-17 cut will be in addition to a previously identified shortfall of $4.5 million in the budget year that ends this June.

While he doesn’t believe the proposed cuts are a “vindictive” act by the Walker administration, Schmidt said he wishes political leaders would make different choices to deal with the state’s looming budget deficit. According to The Associated Press, the next two-year state budget will fall $650 million short if spending levels are kept constant, and that’s on top of a $280 million hole that must be filled by the end of June. After Walker, a Republican, introduces the budget, it still must be approved by both houses of the Republican-controlled Legislature and signed by the governor before becoming law.

At UW-Stout in Menomonie, Chancellor Bob Meyer announced what he called “immediate steps to put us in the best position to handle that cut while preserving the quality of education our students receive.” The cost-cutting measures included suspending salary adjustments, out-of-state travel, and decisions on hiring for non-essential positions.

“I intend to engage the campus in serious discussions to find innovative ways to meet these new governor’s budget challenges,” Meyer said after Walker’s Feb. 3 speech. “We will continue to strive to provide our students with the quality education they have come to expect. But these continual reductions clearly are not helpful.”

UWEC’s Schmidt said he understands if university employees are angered or disheartened by the situation, but said they should avoid a “defeatist” attitude. “I don’t get the luxury of being in my office, sitting around and being as angry as I’d like to be,” he said. 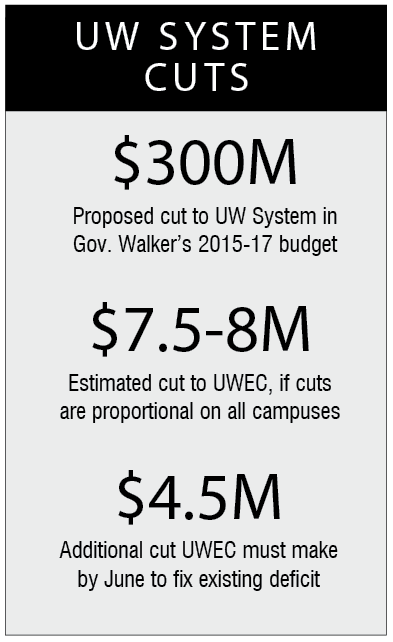 Staff and student leaders were taking a similar outlook. “Emotions run the gamut, but until we’re given more concrete evidence, anything that anybody says is going to be purely speculation,” said biology lecturer Mitch Freymiller, chairman of the University Senate, which represents UWEC faculty and staff. “Once we get the information, then will be the time to decide what we can’t do any longer.” Freymiller added that he believes the university’s faculty and staff are up to the challenges they will face.

“I think that the important thing to remember is that this process hasn’t even really begun,” echoed Jake Wrasse, vice president of UWEC’s Student Senate. Wrasse said that Walker’s proposal to give the UW System partial independence – his budget would make it a “public authority” funded by a block grant – might have advantages for the university. In his address, Schmidt agreed, saying autonomy from state bureaucracy could help streamline campus operations and save money. However, he added, such freedom isn’t a tradeoff for the potentially huge funding cut.

In a press release announcing the cuts, Walker added that his budget will also include another two-year tuition freeze. “The people of Wisconsin deserve a government that is more effective, more efficient, and more accountable, and this plan protects the taxpayers and allows for a stronger UW System in the future,” he said. In a subsequent interview with Milwaukee radio host Charles Sykes, Walker said, “Maybe it’s time for faculty and staff to start thinking about teaching more classes and doing more work.”

In his speech to faculty, Schmidt expressed dismay at that attitude: “I don’t appreciate people who say you don’t work hard, because you do.”

Schmidt said the university must “find our path out of the woods,” then added a caveat: “It’s too early for me to say we’re going to come out of this stronger.”

To learn more about the state budget’s potential impact on UW-Eau Claire, and to try your hand at the university’s budget calculator, visit www.uwec.edu/Chancellor/budget.htm.