Me and Santa Claus

rough patches in my relationship with the jolly ol’ elf 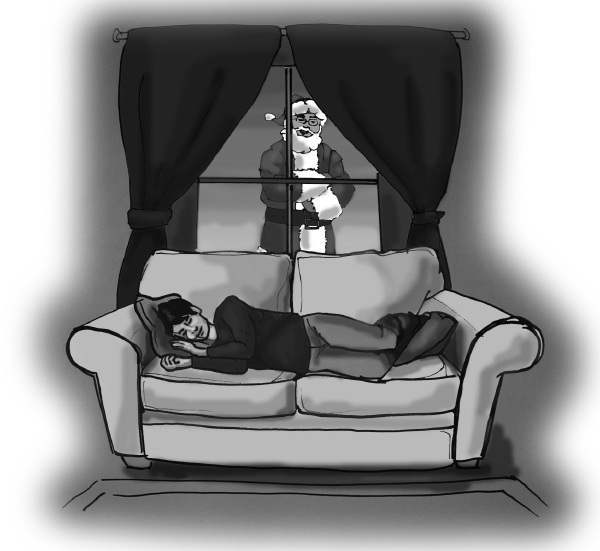 Well, Christmastime is here. It’s time for joy. It’s time for cheer. It’s time for sugar plum fairies to flit about your dreams, sprinkling your sleepy time thoughts with glitter and cinnamon. And of course, it’s time for Santa Claus. And speaking of Santa Claus, that cheery ol’ fat man always reminds me of a wayside bathroom nestled alongside Highway 53 between Eau Claire and Rice Lake – in the summertime.

That’s where I was told.

The family was heading up north to our cabin, and right before I loaded my butt into the car, I was watching MTV – trying get a last dose of sweet, sweet music videos before spending the weekend in a no-cable-having cottage. In one video, the dancers brought out a MASSIVE boombox of wet-your-pants-it’s-so-cool proportions. Many shiny switches and knobs. Many blinky lights. Many places to insert many fantastic cassette tapes. It took a few people just to carry it.

I wanted one. At the time, I probably owned about four audio cassettes – three of them being Disney read-along tapes – but I wanted one.

As I got into the car, I was blabbering on about this boombox and how I just had to have it. My mom said something infuriating like, “Those are pretty expensive, Mike.” So I mustered up the formidable force of my pre-adolescent logic skills and declared, “Santa can get it for me.”

And so it began. I passionately argued about how Santa can make you anything, so a boombox the size of a smallish aircraft carrier was no big deal. My mom, bless her heart, tried to discourage my Christmas wishes without actually saying something like, “Santa’s not real, Mike, and there’s no way in hell your father and I will spend a small fortune on something so blatantly ridiculous.”

I started to suspect something.

Like a cold darkness at the edge of my mind, I started to realize that all those sad, grumpy kids in the movies, the ones who didn’t believe in Santa ... they might have been right all along. The argument with my mom grew and grew until finally, shouting, I said, “Yes or no – is Santa real?” She said, “No, Mike, he isn’t.” And I wailed as if I’d just lost a son in a war.

One Christmas when I was a (self-righteous, argumentative) college freshman, my dad came home with a light-up plastic Santa Claus to decorate the front step of our house. Proving what a pleasant guy I am, I told him how much I hated it.

Yeah, I was a fun kid to take on a two-hour car ride. We pulled into a wayside, and while my dad and sister took a walk, my mom calmed me down. By the time we hit the highway again, she had me laughing.

That next December at my family’s Christmas dinner, I asked my cousins if they believed in Santa. They told me no, but they believed in “the spirit of Santa.” I had no idea what the hell that was supposed to mean. I made a point of telling them not mention Santa being all fake and everything to my older sister. Because she didn’t know yet.

Many years later, probably to get revenge for putting my mother through the ordeal in the car (sorry, Mom), my dad scared the crap out of me with a three-foot-tall plastic Santa Claus.

You see, one Christmas when I was a (self-righteous, argumentative) college freshman, my dad came home with a light-up plastic Santa Claus to decorate the front step of our house. Once again proving what a pleasant guy I am to have around, I told him how much I hated it. It was gaudy and weird-looking and commercial and WRONG. So, naturally, he’s placed it on the front porch each December since then – just so he can ask, “Did you see what’s on the front step?” and watch my eyes narrow.

And one year, when I had to sleep on their living room couch, my dad actually placed the glowing plastic Santa in the front window, facing me. I had the pleasure of waking up in the middle of the night to see a creepy, three-foot-tall, rosy-cheeked Chris Kringle leering at me from outside. I almost wet the couch. Maybe I deserved it.

Years later, my two-year-old daughter saw that plastic same Santa on Grandpa’s step, and, not even fully knowing who he is, was delighted. She wanted to be lifted up to the window to see him again and again. And again.

So I guess, even after I found out he wasn’t real, Santa’s always been there ... watching ... waiting to see how I handle his legend with my own kid. My wife and I are doing the Santa tradition with our kids, so there will definitely come a day when they will learn the truth. And on that day, we aren’t going anywhere near Highway 53.