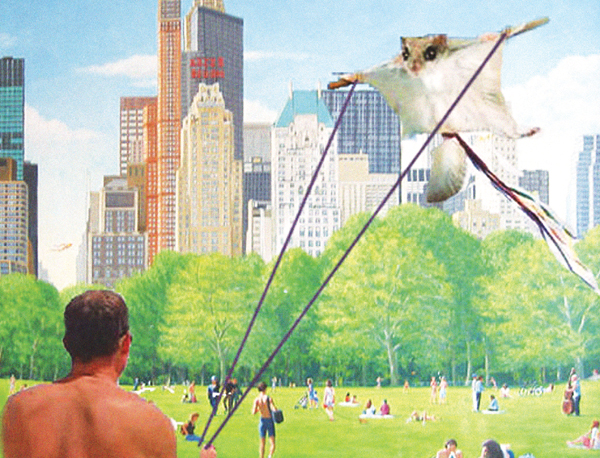 Some people love squirrels. Some people hate them. Some think they’re cute while others see only big, fat rats with enormous, hairy tails puffed up with enough germs and bacteria to kill a Triceratops. They are rodents after all.

Controversial debates of cuteness aside, one thing the entire world can agree upon is that there are a lot of squirrels within the city limits of Eau Claire, Wis. Why the tree rodent population of a mid-sized Midwestern city is a matter of worldwide discussion is beyond me, but the general consensus is basically, “Dang. We’ve sure got a lot of squirrels in town.”

But how many? Well, according to Todd Chwala – superintendent of Parks, Forestry and Cemeteries for the city of Eau Claire, and a guy who knows about these things – we have no idea. He says, “I would be lying if I told you we had a handle on the squirrel census. We don’t have a monitoring program at this time.”

And it’s doubtful we ever will, as squirrels really aren’t a problem for the city. Besides seriously pissing off bird watchers by bogarting their feeders, and the occasional home invasion, squirrels just don’t cause a lot of trouble, certainly not in public areas. In fact, Todd tells us, “You might say we look at them as part of the park amenities (kinda like buying a house with furniture included).”

In addition, Todd continues, “[We’ve had] no incidents or injuries reported in 2014 (to either squirrel or park patron due to squirrel).”

Todd is kidding. He says, “Seriously though, they cause few problems. We get the occasional sign vandalized. They seem to like chewing on plywood.”

Todd believes that Eau Clairian squirrels do play a role in our urban forest’s ecosystem, especially in our parks, explaining that, “with the oak tree represented well throughout the city’s forest, one can expect a robust squirrel population. And parks having mature oaks tend to [produce a] favorable habitat (trees with nesting cavities).”

I don’t have any oak trees in my yard, but I feel like I’m surrounded by squirrels. It’s been that way for as long as I can remember. Years ago, I wrote about a harrowing experience my wife and I had with some urban squirrels. And I quote (myself) ...

Our story begins with two teenaged squirrels. Abandoned by their mommy squirrel, they had taken up refuge beneath the cheap, plastic lawn table sitting on our back porch. So we did what any hero would do: gave them peanut butter. (Bad idea, kids! We found out later that abandoned squirrels need water more than anything.) Then we called June Owen of the White Pine Rehabilitation Center in Fall Creek.

She was out, so we left a message.

She called back later that night. Following June’s instructions, we found a cardboard box and put on some gloves. We stepped outside and cautiously approached the squirrels. They were asleep. And cute as hell. Since abandoned squirrels are remarkably friendly, boxing the rodents wasn’t too difficult. It was shortly thereafter we found ourselves driving to a gas station in Altoona, a box of squirrels resting between us.

It was pitch black and rainy as we pulled up to a rusty blue minivan parked beneath a lone street lamp for a late-night squirrel hand-off. We met June (a happy apple of a woman), and she took our squirrels off to Fall Creek. Off to make a new life. Off to be happy and healthy. As far as I know.

... aaaaaand end quote! Wow, that was a really long Mike Paulus quote. Anyway, the White Pine Rehabilitation Center is now closed, but June Owen provided a valuable service to area critters for many years. And the whole experience has helped carve out a cozy little place in my heart just for squirrels.

Yep, I like squirrels. Long may their puffy tails flourish.