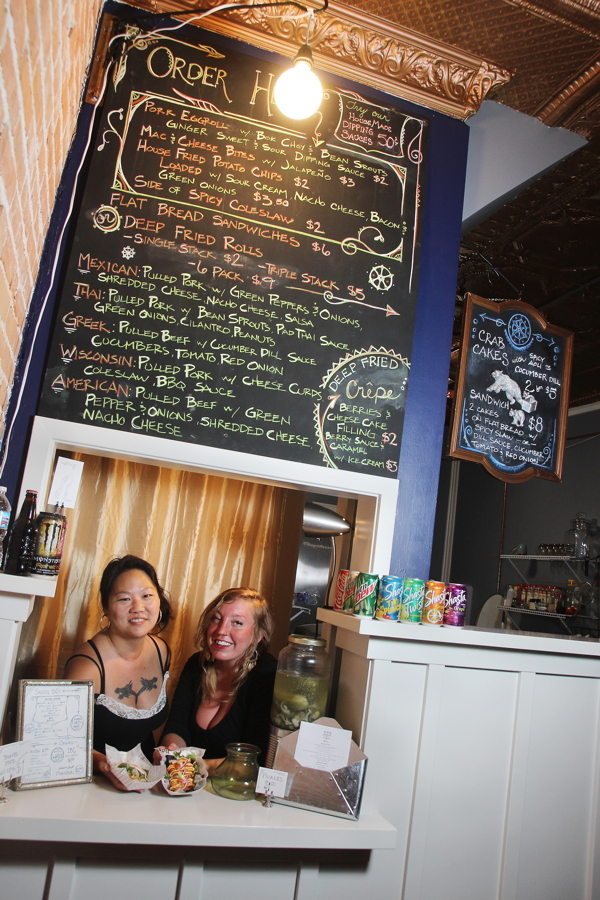 There’s one ageless affliction we’re all familiar with: the midnight munchies. Maybe it strikes you after you’ve been at the bar with friends, tossing back peanuts all night. Or maybe you’re driving home from your second cousin’s third wedding, and you last saw food five hours ago. In either case, it’s late, and you’re famished. This situation of the growly tummy could end a few different ways: You indulge in cheap, greasy bar food; You indulge in cheap, greasy fast food; You go home, stand with the ‘fridge door open, and scarf down cold, leftover pizza that was cheap and greasy yesterday.

Fortunately for you, Stacy Gregerson and Tosha Larson of Menomonie aim to present a happy solution to this common tale of dining woe: gourmet food for the budget-conscious, late-night, Chippewa Valley foodie. This solution’s name? Stacked Eatery. And by late night, they do mean late – the eatery doesn’t open until 10pm, Thursday through Saturday, and stays open until 3am.

Stacked has been open at 617 S. Broadway since April, and it’s already garnered an extremely positive reputation, which is both rare and eminently valuable in the hardscrabble food industry. “People know who we are,” said Tosha, adding that other food service workers in Menomonie have become regular customers. “We’ve been very well received,” said Stacy. “We grew really fast.”

It’s no surprise, considering the quality – and variety – of their menu. “There’s nothing in Menomonie except pizza,” Stacy said. “We knew that these hours and this food would do well here.”

Stacked was started on such a low budget that the pair anticipated being able to cover their costs by serving 15 customers a night. “We’ve been having well over 100 a night,” said Tosha. Despite the late (and early) hours, it isn’t just whippersnappers, either. “I had one older woman tell me she was going to set her alarm and bring her girlfriends down,” said Stacy.

Despite the food being both fast and cheap, not one item on the menu resembles the oft-dreaded, oft-scarfed greasy bar food you know you’re going to regret the next morning.

Part of the limitations of a low-budget startup mean that they have had to make do without a full kitchen, instead utilizing roasters and a deep-fryer as the diving boards for their small but varied, unique, and completely homemade menu.

Now, lest you visit Stacked Eatery expecting a traditional restaurant, it needs to be clarified that it isn’t. I found it to be startlingly fast food, in both style and delivery. Once you enter the eatery, you can place your order via Tosha at a small window. There are chairs along the wall, but you will receive your food with surprising speed, even during rushes. “Even when there are tons of people here, it doesn’t get crazy,” said Stacy. “Everything’s always fresh, and food is ready in minutes.” Place an order, loiter for a moment and enjoy the vaguely baroque décor, and in minutes you’ll have your food in hand to satiate those munchies.

The best part about Stacked Eatery? Despite the food being both fast and cheap, not one item on the menu resembles the oft-dreaded, oft-scarfed greasy bar food you know you’re going to regret the next morning.

The house fried, loaded potato chips are a perfect appetizer to start your Stacked Eatery foray: They’re fresh, truly loaded, and the perfect size to settle that rumbling stomach. If you’re feeling a little more highbrow, a pair of rich crab cakes, the newest addition to the menu, could be the way to go. “People have been coming back for them,” Tosha said. A deep fried crepe filled with berries and cheesecake filling is several perfect mouthfuls for those with a sweet tooth.

But perhaps your hunger goes a bit deeper – then you’ll want to dive into a sandwich or a deep-fried roll. Either can be filled with five different options, depending on the vibe you’re feeling that night: Mexican, Thai, Greek, Wisconsin, and American. The Wisconsin—featuring cheese curds, of course – has been a best-seller, but I sampled the Thai sandwich on Stacy’s recommendation. The flatbread was soft, the pulled pork tender, and it was filled with crispy bean sprouts, green onions, and peanuts. Topping off every sandwich or roll is one of Stacked Eatery’s house made sauces.

Despite the emphasis on sauces and the take-out style of the eatery, you needn’t worry about Pad Thai sauce running down your arms. Appetizers are served in disposable trays, and sandwiches are carefully wrapped in foil, making it possible to eat and run with anything on the menu – if that’s what you like to do at 2 in the morning.

Portions are generous but manageable, and prices are low enough that a college student with $5 can leave Stacked confident that her growling stomach won’t have to be her study soundtrack.

Stacked Eatery can also be found at downtown events, and, occasionally, the Menomonie Farmer’s Market.

Think of Stacked Eatery next time you’re out past your bedtime and that late night craving hits – the one that demands pulled pork, cheese curds, coleslaw, and BBQ sauce, all in one juicy, warm, homemade bite. Order a Wisconsin, and your night will be that much better in a matter of minutes. How could it not?