get to know your neighbors, one question at a time 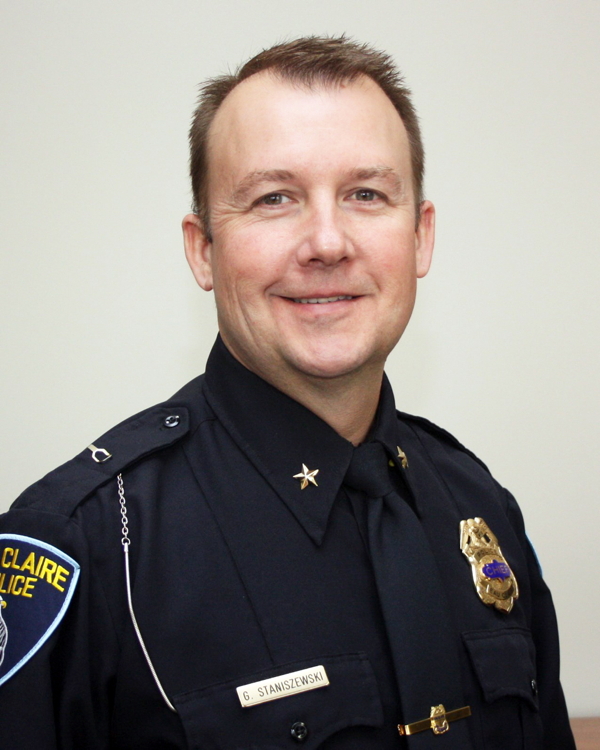 Eau Claire Police Chief Jerry Staniszewski may have a complicated name (it’s prononounced “Stan-ih-sheh-ski”), but his reasons for going into law enforcement were simple: “I believe that there is nothing more honorable and noble than to serve the community as a police officer,” he says. “If you want to make decisions on a daily basis that affect lives in a positive way, become a police officer.” After serving as an officer at three UW System campuses, Staniszewski joined the ECPD in 1991, serving as a patrol officer, a member of the drug unit, and in the detective division before being appointed chief in November. Here, the chief talks to V1 about lawbreakers’ lame excuses, the best sandwich in town, and the not-so-secret identities of our real superheroes.

What place in town considers you a “regular”?
Mr. T’s Barber Shop on Golf Road. I don’t hang out as much as Sheriff Andy Taylor did at Floyd’s Barber Shop, but I enjoy the conversation with Barber Dan just as much.

What is one of the best cultural experiences you’ve ever had in the Chippewa Valley?
I enjoy attending the Hmong New Year celebration at the UWEC McPhee Center. I initially learned of the event while being assigned to work. I also like the variety of food offered.

What’s your favorite local festival?
I like the new Clearwater Winter Parade that travels down Water Street to the Hobbs Ice Center. It’s one of the first winter special events and it is broadcast live which always adds some excitement to it.

What is your favorite piece of local trivia?
I think it is amazing to think that Hall of Famer Hank Aaron played baseball in Eau Claire. Eau Claire has a lot of great history stories, and I learn something new all the time.

What frustrates you about the Chippewa Valley?
The price of gasoline in comparison to surrounding communities.

The Eau Claire metro area has one of the lowest crime rates in the nation. What do you attribute this to?
Several factors have influenced our crime rate. In general, the national crime rate is on a downward trend and locally we have dedicated professionals in the public safety profession. But we have something special here in our community: Community members who realize crime prevention and public safety is not a spectator sport. They get involved and realize it is everyone’s responsibility to ensure we have a safe community and a high quality of life.

For those of us who only know about police work from watching TV, what would be the biggest surprises if we tagged along on patrol in Eau Claire?
The number and variety of decisions a police officer makes in one day of work. We have a very high call volume, and every case is different. It’s amazing how much knowledge is needed to resolve all the community issues officers are faced with on a daily basis.

What’s the worst excuse for lawbreaking you’ve ever heard from a suspect?
When I was a detective, I arrested a person who committed a burglary and stole money. He stated that the only reason he stole the money was because that person stole his stash of drugs from his house the night before. C’mon, man!

Death bed, one meal from a local restaurant, what would you order?
Mancino’s Italian Grinder. Seeing how it would be last one, I would go for the whole grinder size.

Which beat would you rather work, Water Street or Downtown?
Downtown. I like the redevelopment occurring and I just know more people on that side of the river. Thankfully, there are just as many people working at the police department who would prefer to work on Water Street.

If you could magically add one store, restaurant, or shop to the area, what would it be?
Cabela’s, of course.

What book, TV show, or movie would you recommend to the members of the City Council?
Heroes Behind the Badge is a documentary film featuring some of the brave men and women of law enforcement who put their lives on the line and survived, and those who made the ultimate sacrifice. There was a showing at a local movie theater last summer and not a dry eye in the house.

Who’s your favorite lawman, real or fictional? Why?
I have a lot of respect for the success of NYPD Police Commissioner William Bratton who has also been police commissioner for the Boston PD and LAPD. He was responsible for dramatic reductions in crime rates by putting the “Broken Windows Theory” into practice and the use of “Comp Stat” as a way of tracking crime trends. This may date me a little bit, but I like the fictional LAPD Officers Pete Malloy and Jim Reed from the old television show ADAM-12. They were partners, and Officer Malloy was the veteran responsible for training the rookie Officer Reed. Officer Malloy trained the audience how to handle police incidents through training Officer Reed. The show revealed the professionalism of officers and departments in law enforcement. It was exciting at the time, but would be boring by today’s standard of police dramas.

Normally, one of our questions is “Describe your last encounter with the police department,” but that seems silly in this situation. So we’ll ask this: Describe your last encounter with the fire department.
The last personal emergency situation with the fire department was when my son choked on a grape during dinner. It was a short scare, but an ambulance crew responded quickly to check my son over to make sure he was OK. I was very grateful and have great respect for the men and women of the ECFD.