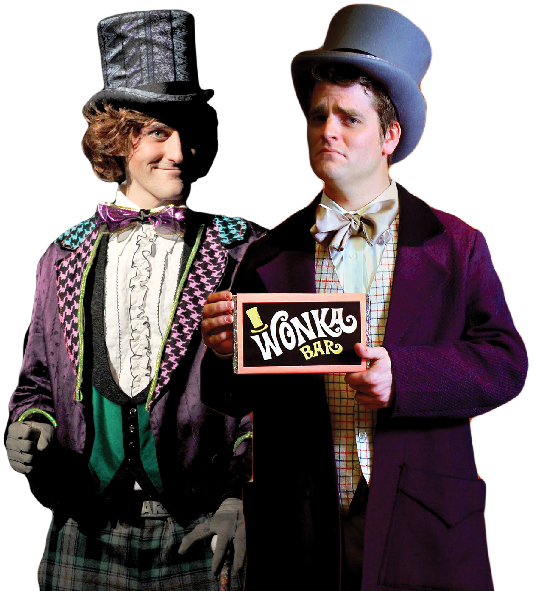 DOUBLE DOWN ON WONKA! The Eau Claire Children’s Theatre and the Menomonie Theater Guild are both producing Willy Wonka for February, with Menomonie’s Wonka played by Jonathon Hillman (left) and ECCT’s Wonka played by Mike Wilmoth (right).

Two theatrical groups in the Chippewa Valley are performing the same play at the same time: Roald Dahl’s Willy Wonka. They will both be performing the same version, one that was written in 2004. This version includes many of the beloved songs from the 1971 film with Gene Wilder, but also includes some new songs that were not found in the movie. One reason the two groups chose to perform it now is that it will soon be taken off the market: A new musical version of Willy Wonka is currently debuting in London and should eventually make it to Broadway and then be available for other theaters.

One of the productions will be put on by the Eau Claire Children’s Theatre, directed by Wayne Marek. Marek says the creativity with the play that they were given will come in costuming and set design. Marek said ECCT does shows for a variety of age groups, asserting that despite its name, it is not only a theater for children. Willy Wonka will be a family show, with both children and adults performing. Marek has a degree in music theater from UW-Eau Claire and has been in the theatre world for much of his life. The Children’s Theatre is currently celebrating its 25th anniversary this year, and Marek was there in the beginning. He was one of the founders for the theatre and is the executive director. The theatre puts on about 15 different shows each year, which is more than one each month! They are currently in rehearsal for three different productions, which keeps actors and directors busy year round.

The ECCT version of Willy Wonka will be performed at the State Theatre, which provides ample space and a large stage. Marek says that best part about a show is that “it’s exciting to see it all come together, especially when it’s a new show that we haven’t produced before.” The production will involve about 40 people in the cast, about 10 in the orchestra, plus volunteers, which makes for quite the spectacular.

Heather Lahr, a graduate of UWEC with a degree in music education, is the vocal director for the ECCT performance. Lahr says there are about 40 people singing for the play, 15 of whom are children. She says her favorite part about her role as vocal director is “being able to work with kids and adults … and when people are excited about being there and learning the music.” One of the challenges for Lahr is working with a wide variety of age groups for the production.

The second production of Willy Wonka is being put on by the Menomonie Theater Guild and will be performed at the Mabel Tainter Center for the Arts. Blaine Halverson, the director for their show, started out in the theater world at the age of six. Halverson’s question during the directing process has been, “How can we keep it familiar to people but also give it a fresh face?” Halverson did many shows as a young person and eventually became involved with the guild again in 2003; now he’s the executive director. The Menomonie Theater Guild typically performs four productions in the main stage season and three youth productions each year. Halverson thinks his Willy Wonka cast is a younger than the one performing in Eau Claire. Much of this is thanks to a guild program, Red Cedar Youth Stage, which Halverson says is a very strong program. Their production of Willy Wonka will include about 40 youth cast members.

One of the major differences between the two shows will be the size of the theaters. The State Theatre has a much larger stage and seating area, which gives them more flexibility in set design. The Mabel Tainter, on the other hand, is more limited in space, seating only about 260. Halverson thinks the limited space has actually sparked some creative ideas for effects. Sneak peak: Halverson says that the fizzy lifting scene in the play will be done in silhouette due to the limited space, which should be very unique.

If you can, check out both productions, see what’s different, and then decide which you like better. As the song says, “There’s no earthly way of knowing … which direction they are going.”