The Final Thanks for Asking

The beloved Volume One column draws to a close as its author embarks on a new adventure on the Oregon Coast. Here, Frank Smoot picks a few of his favorites from the series’ historic run.

People love history. They love stories, context, and a chance to reflect on the events and people who’ve come before them. These elements and more have solidified Frank Smoot’s “Thanks for Asking” column into a beloved local treasure. The column’s half-decade run in Volume One has covered a lot of ground – local trivia, mysteries, history, myths, and legends. However, as fun and as educational as the column has been, we’re sad to report the pages before you mark the end of “Thanks for Asking.” But they also celebrate a new beginning for its author. After spending the vast majority of his life right here in the Chippewa Valley, starting in just a few days, at 52 years old, Frank is embarking on a new adventure leading the Coos Historical and Maritime Museum on the southern coast of Oregon.

Before you get too upset, look, we know: His column is one of your favorite things in the magazine. Yes, we know it’s one of the first things you read. And yes, we do know how funny and knowledgeable he is. We know. But together we can get through this. Stay strong. Frank’s regular contributions to Volume One on local lore have created one of our most-popular long-running features, and its absence will most certainly create a void. For this final installment we’ve given Frank a big ol’ stretch of space to pick some of his favorites from the last five years. And even better, we’ve given Frank the entire gallery inside the Local Store to give a farewell talk – a closing reception, so to speak – on Wednesday, Oct. 16 at 7pm.

It took some convincing to get Frank to even do his column. You see Frank is a relatively reserved sort of guy, and when I offered the idea for a recurring Q&A feature, at first he wasn’t so sure. In 2007, after several weeks of chasing him down on email and telephone, I finally had to visit the Chippewa Valley Museum to corner him in his office and explain just how great he, and his column, would be. Eventually he gave in, and I’d like to think it worked out pretty well.

Frank wasn’t born in the Chippewa Valley, but he’s definitely made this place his own. There’s no doubt his departure is a big loss to this community. And while he certainly has a fantastic way with history, facts, and stories, it’s important to remember the deep reservoir of Chippewa Valley knowledge doesn’t leave with him. He’ll be the first to tell you he doesn’t know everything. But he knows how and where to find it – at the Chippewa Valley Museum, an amazing local resource that isn’t going anywhere.

The scrumptious buffet of Thanks for Asking columns you see before you is a bittersweet final meal prepared by the man himself. Enjoy it as a final Celebration of The Smoot. And join us on October 16 to hear his final talk, pat him on the back, and wish him well out West. He deserves it. Eau Claire, so they say, was the fourth city in the U.S. to get electric street rail (after Boston; Columbus, Ohio; and Wisconsin’s own Janesville) in 1889. The Chippewa Valley Electric Railway Company had expanded its service to include Chippewa Falls by 1898.

This commuter line stopped at Lake Hallie, and the rail company, generously enough, built “Electric Park” at the stop, so that picnickers could sojourn, rail patrons or not. In its heyday, the park offered a domed shelter, dance hall, outdoor movie screen, amusement rides, and paddle-wheel boats. Resort-quality really, and all powered (at first) from a steam generator on Starr Avenue.

Some of the Eau Claire guys you’ve heard of – Ingram, Buffington, Owen – were investors in the 19-aughts.  The rail line was sold to the Minnesota-Wisconsin Light and Power Company by the teens, and finally to NSP. By 1932, motor bus service replaced all electric rail in Eau Claire, but the Hallie service was already gone: the last “interurban” stopped at Lake Hallie Aug. 7, 1926. A sad day for area transit.

Thanks for asking. That is a hard one. What we know is thanks to research done by former city public works director Brian Amundson (retired now, sad for Eau Claire). Let’s let him spin it:

Looks like it was first created as a road that went from Omaha Street to just south of Seymour Road. This was platted as part of “Somona Park Place,” recorded in 1916.

A 1918 ad in the Eau Claire Leader shows lots for sale in Sonoma Park Place. “$1 down and $1 per week. No interest or taxes for two years – no payments when sick or out of work.” These lots were being marketed and sold by Hastings Realty Co., which assured the reader “Anyone can buy a lot the Hastings Way.”

Until we hear otherwise, Brian and I are guessing the phrase just kinda stuck.

I HEARD SARAH PALIN HAS A FAMILY CONNECTION TO EAU CLAIRE. IS THAT TRUE?
April 22, 2010

You must be thinking of Charlie Manson. Sarah Palin does have a family connection with Chippewa Falls, though!

Homer’s first Wisconsin stop was at Tomah, 1872. He worked for the Chicago, Minneapolis & Omaha Railway, building bridges, I think. He then helped build the Wisconsin Valley Road, from Tomah to Wausau. In July 1874, he came to Chippewa Falls and helped build the Chippewa Falls & Western Railway from Eau Claire’s famous and sadly departed Omaha Depot to what they called “Omaha Junction” near Chip’wa (one of a thousand Omaha Junctions across America, I’m sure).

He was a conductor for a few years then went into business (wholesale dealers in wood, coal, and lime) with his older brother Seymour. Homer married Gussie Godfrey – who must have been from a kinda prominent family, seeing as they got married in Godfrey, Ill.

PLEASE TELL ME MORE ABOUT THE MULTITONE PHONOGRAPH CO. IT WAS IN THE PARKS AND REC BUILDING ON OXFORD. 1920s?
September 25, 2008 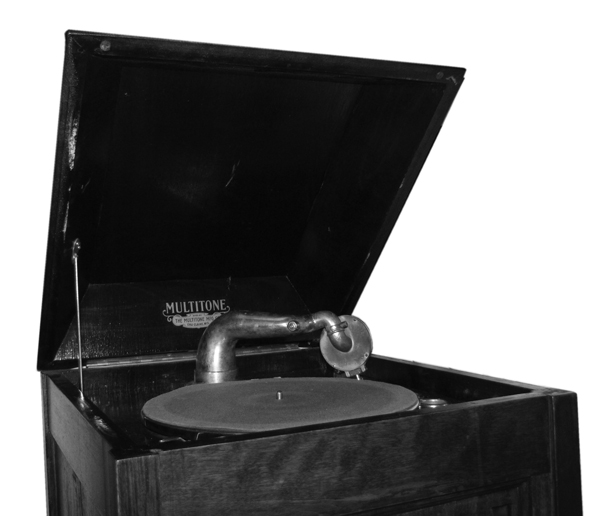 You’re right: it had the brick building at 1300 First Ave., most recently home to Parks & Rec Administration and Programs, and before that CVTC (yep, the whole darned technical college).

So, in 1918, local piano maker Edward J. Sailstad formed Multitone to build a phonograph he’d designed. He sold as well as he designed apparently: for instance, he sold 1,000 units in Cedar Rapids, Iowa. The next year, Multitone acquired the old Eau Claire Trunk Co. factory (footlocker-type trunks, maybe other kinds, too: had a retail store on South Barstow). Multitone was making 100 machines a day in 1919.

On August 28, 1920, tragedy struck. Sailstad died in a cottage fire at Lake Nebagamon (now home to the world’s heaviest ball of twine). Investigators found a few bones near the fireplace. Survived by a wife (Leone?) and two children.

But then details started trickling out. Sailstad’s dad had pulled a disappearing act four years earlier. He had married a woman named Kingston. Sailstad’s stenographer, Dorothy Anderson (“Norwegian and pretty”), who had worked for Multitonefor a couple of months, left “for Chicago” three weeks before, on Aug. 9. She said she’d married a Chicago salesman named, um, Kingston. A Duluth taxi driver came forward and said he’d taken Sailstad and Anderson the 30 miles from Lake Nebagamon to Duluth the night of the fire. Sailstad had taken out $56,000 in insurance (over $800,000 today).

By 1922 authorities had decided to exhume the bones, including teeth, and send them to Madison. A Madison dentist, comparing the teeth and an X-ray of Sailstad’s mouth, testified they couldn’t be the same. Nevertheless, a jury declared him legally dead and the insurance company settled with poor Mrs. Sailstad.

In December 1923, a fellow recognized Ed Sailstad in Eureka, Cal. Authorities caught him — with Dorothy — in Napa, where he’d been repairing typewriters. Both were convicted of arson and sentenced to four years prison. (Came out at trial that he’d robbed a grave at Lake Nebagamon Cemetery to get the bones.) Ed was paroled after three years, and met Dorothy at the gates of Taycheedah women’s prison on her release. They married in Oshkosh, and Sailstad went to work for a refrigerator company in Minneapolis. Lived on happily, as far as I know.

His company wasn’t so lucky. Steven R. Davis (better known as the head of Dells Paper and Pulp) agreed to take over as president, promptly found a $50,000 deficit, and guided Multitone through bankruptcy. Creditors were paid 7 cents on the dollar.

Thanks for asking! Why yes, yes there was. The greenhouse itself had a fairly mild history. Anton Lauritzen arrived in the U.S. from Denmark in 1894. Jensine (“Jennie”) Jensen arrived from Denmark three years earlier in 1891. I think they met and married in Wisconsin but not in Eau Claire. Anyway, by about 1900, they were in town and bought the Oakdale Greenhouse from the Gadsby family, then ran it for the next 50 years. The last owner, briefly in the early Fifties, was Ray Hibbert. It’s been demolished and the lots sprouted houses east from the corner of Grove and Main on the south side of the street.

From all accounts, the Lauritzens were an upstanding family if you consider politicians upstanding (which not everyone does). Anton served a term as city councilman and his son Richard served as Assistant Attorney General for Wisconsin.

The Gadsby family, from whom Anton and Jennie bought their greenhouse, was waaay more colorful. John Gadsby was all right. He was born in New York, married Helen Hurlbutt in Pennsylvania, and moved here about 1871. Worked as a tailor. It’s a little unclear to me whether he or his son Fred owned the Oakdale Greenhouse in 1900, but his sons — the Gadsby brothers, Fred and Thomas, both druggists — kept getting themselves into unusual trouble. In 1919, Thomas was found guilty of selling a newspaper containing obscene language, an issue of the Twin City Reporter about “Eau Claire Chinese and White girls,” and fined $200. In 1920, Fred was charged with selling adulterated food. In 1922 Thomas was sentenced to 90 days in jail for selling moonshine. Fred moved to Los Angeles, where he was killed in a car accident in 1926. Thomas died here in 1931, but I don’t know how.

I can’t help you with the structural components, but your memory sure sounds right. I can tell you it was always a pretty big place. Even when the Gadsby family owned it, before 1900, it had a huge two-tine greenhouse (like the head of a tuning fork) and another building as big as either tine of the first building. There also was a house, barn, and shed, all on three full city lots, almost three-fourths of an acre on Main Street. It strikes me as very possible that the house at 941 Main is a renovated version of the original house on that complex. The two Fifties-style houses closer to Grove sit now on the site where the greenhouse business blossomed for so many years.