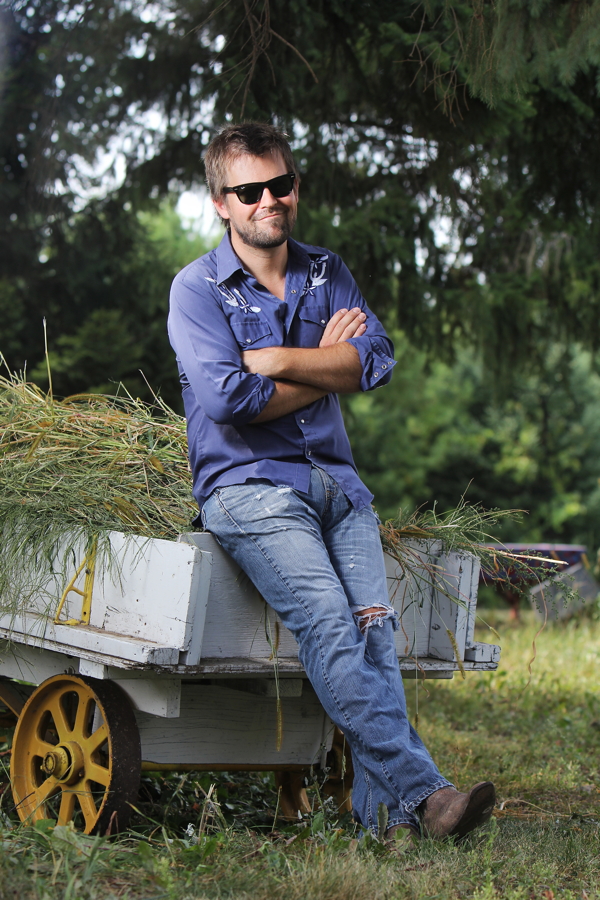 As the weather starts to chill and night comes a little earlier every day, the world tends to take on a slight edge. What an appropriate time for Chippewa Valley singer-songwriter Jeff White to release a new record. Renegade Revelations is White at his largest, bringing a full band recording to the table that highlights the songwriting chops always present in White’s music. We chatted with White about his newest record.

This record seems to have a slightly harder edge than previous recordings I’ve heard from you. Where did that come from?

My last album, American Reality, also had a few hard-edge songs such as “Tobacco, Oil, Drugs & Guns” and “Backward Attack.” The lyrics are heavy but it was primarily just me and my acoustic guitar. With Renegade Revelations, I’m using a custom baritone electric Bischoff (locally made guitar) and playing with a full band. Since I play a lot of solo shows, I wanted to experiment with what I could do in an uninhibited sense. This new album is a mixture of warm, dark tones, songs of love and lust, and outlaw folk/country songs. Or as I call them, action-adventure songs. But there are quite a few slower, darker songs as well.

How long were you working on this record? What was the process like from songwriting all the way to the last day at Pine Hollow recording studio?

I’ve been working on this album for about two years. I had a lot of personal issues happening in between it all and to juggle that with recording and playing up to 200 shows a year, much less organizing the session work, it can take a while. I know I could put out an album fast if I buckled down and just did it but if you’re patient, ideas will creep out of the cracks when you’re least expecting it. Then you bring it all to the table. I like the fact that you never know what’s going to occur that day in the studio even though you planned your to-do list. A part of me didn’t want the recording process to end because I enjoyed it so much. We’re all really proud of the project in its entirety, though, and it was good to finally reach that line.

I see Evan Middlesworth and Dan Boetcher’s names all over the credits. How influential were they on this record?

I probably wouldn’t have made the album when I did if it wasn’t for those guys. Dan kicked my ass into gear and inspired me to start this project back up and he had a lot of ideas for the project. We had been recording at his house and mine previously but we both didn’t have all the equipment, gear and instruments that we knew Evan had. Evan is very efficient  as an engineer  and approaches recording with artistic sensibilities close to mine. Plus, he’s a multi-instrumentalist, so when we needed to lay down a track, whatever idea we had at the time, Evan could pull it off and pull it off well. We made a good team for the project and I let them produce the album almost fully. I liked their ideas and insight and realized that I love working on a team during recording. The studio in general can build stresses but not when you work with Dan and Evan. Together, they are some of the funniest people I know. They should  create a  side project as a comedy duo. It was a great time.

You obviously spend a lot of time playing live. Does that influence your studio work at all?

Knowledge comes out of man-hours behind the mic,  I suppose. I look at an album as a piece of art. I feel that every record should have an overall vibe all the way through it, but you can meander around a bit and check out the scenery while you’re there. Music is very visual to me. I tend to close my eyes a lot while playing so I can experience  music on a deeper level. It’s very similar to  lucid dreaming.  That’s when you can pull out magic. Playing live, I experiment with tones, sounds, movement and the whole spectrum of what you can do with your craft. I’ve used certain physical movement while vocalizing during recordings. You can get the live feel of how the song comes out at a show, in the studio, if you hone it right. Recording is a lot more enjoyable now that I’ve been experimenting with amplified sounds during shows. I also play a skiffle drum, as I call it – a hodge-podge of different percussive instruments connected to cymbal stands. For the past few years, I’ve been trying to look at every object as a possible musical instrument. The studio is more fun if you’ve trained yourself to think outside the box.

What’s on the horizon for you? Got anything else you’re working on?

I recently moved out to a two-story farm house in the middle of 120 acres  in northwest Wisconsin.  I’ve started writing my next album out there already. So much time to think, create, grow your own food  and get re-connected to the earth. I’m also working on a tour down through Texas in the late spring and shopping for a label. I want to expand my horizons a bit more than what I’ve wanted in the past so there are a lot of things happening that are new and exciting right now.