as honey bees struggle to survive around the world, a local group is working to make beekeeping easier in Eau Claire When Josh Miller had to move his bee colonies out to his friend’s house in the country, it wasn’t his first choice of action. His honeybees had become unusually active and Miller, a hobby beekeeper for the past five years, was inclined to remove them from his back yard in Eau Claire to avoid disrupting his neighbors and incurring a nuisance complaint from the city.

“My case was unusual,” he said. “I wouldn’t take that as the standard. Beekeepers order bees that are bred to be docile, not aggressive.”

The city of Eau Claire’s code compliance inspector, John Guettinger, said that beekeeping is allowed in Eau Claire, but only in certain zoning districts near the edge of the city.

“On some of the outskirts of town it is allowed,” he said. “But it is not allowed in most of Eau Claire due to issues regarding neighbors.”

Miller isn’t bitter about moving the hive, but other keepers and bee enthusiasts in Eau Claire, led by Save the Bees organizer Drew Kaiser, are working on the passage of a city ordinance that would make beekeeping     a legal activity. The nationwide push for urban beekeeping is part of an effort to ensure the survival of the species, which is threatened with a mysterious menace known as Colony Collapse Disorder. (More on that later.)

“Recent studies have shown that urban hives fare better than their rural counterparts,” Kaiser said. “And sadly Eau Claire is on a short list of U.S. cities that considers the activity illegal.”

The Eau Claire chapter of Save the Bees (www.facebook.com/SaveThe
BeesEC) is a local group that has reached out to the community in order to garner support for a possible beekeeping ordinance. The organization’s rallying cry is that Eau Claire has a chance to be part of a movement for a healthier earth. They have received close to 500 signatures from supporters, and Kaiser believes that they have more than reached their goal with the amount of buzz about the subject.

“It’s been a conversation that’s been going on for the better part of a year,” said Kaiser. “I happen to know people who keep hives in urban areas, and Eau Claire is one of the few communities in the country that do not actively allow it. We would like to change that with as many signatures as possible.”

The group hopes to model the Eau Claire ordinance after Madison’s beekeeping ordinance, which has received high praise from the American Bee Journal, which called it the “best honeybee ordinance in the country.”

“(The ordinance) takes ample consideration of ways in which to generate permissions for beekeepers while making sure that neighbors are considered in the process,” Kaiser said.

Honeybees are basically super-insects. Not only are they the only insect to create food that is eaten by man, but they pollinate plants more effectively than any other creature. No other insect carries that much environmental and economic weight in our daily lives, which is why Kaiser believes that the ordinance is necessary for the growth of the city of Eau Claire.

“The main premise of the idea is that beekeeping is an activity that has been tied to human societies for thousands of years,” he said. “And it’s been an integral part of how we developed our independence as a society.” According to the USDA, one in every three bites of food we take is directly or indirectly affected by our buzzing friends. Above: Delivery of the queen.

Save the Bees’ goal is to encourage a simple set of physical boundaries and beekeeping outlines that work to keep both the bees and their neighbors safe. The first step would be for a potential beekeeper to talk to his or her neighbors and warn them of the incoming colony. Beekeepers are urged to explain the practice and the habits of honeybees, making their neighbors aware of what makes bees dangerous and what makes them helpful.

“There’s no doubt about it, they do sting,” Kaiser said. “But we want to make sure that hysteria and misinformation about what type of pollinators are stinging people is addressed.”

After checking zoning on the property and the property lines, people would be allowed to apply for a beekeeping license through the city. The Madison ordinance states beekeepers can’t have more than six colonies on their property, and the hives can’t be larger than 20 cubic feet. The hives also can’t be within 10 feet of a public sidewalk, and beekeepers must use what is called a flyway barrier: a wall, fence, or other object that is at least six feet tall and causes bees to rise above the barrier and avoid contact with the community below.

All of these parts of the ordinance are in place to ensure the safety of everyone in the vicinity, according to Kaiser. “It’s all a safety precaution,” he said. “But (bees) have the most to lose of all the stinging insects, because they die afterward.”

“Bees already exist in our ecosystem,” he added. “We just want to protect them and make them part of this city.”

Other than their honey, what do bees bring to the table? A lot. The quality of the vegetables, fruits, and meats that end up on your plate depends heavily on pollination from honeybees. According to the U.S. Department of Agriculture, one in every three bites we take is directly or indirectly affected by our buzzing friends. Not only are they pollinating our vegetation, but they also pollinate the food that farm animals eat. So, in a way, you can even thank the honeybees for the milk you pour over your cereal.

Bees provide a big benefit to our economy and the farming business. The USDA estimates that bee pollination is responsible for more than $15 billion in increased crop value each year. Although there are other pollinators, none are more prolific than the honeybee. Not only that, but they are one of the only pollinating species that can be domesticated for use. Do you like almonds? The almond industry requires the use of 1.4 million colonies of honeybees. How about cherries and oranges? Orchard owners keep bees on-site, ensuring that the crop will be healthy every year. Municipal zoning rules are far from the biggest threat to honeybees. That distinction would go to Colony Collapse Disorder, or CCD. CCD is a mysterious honeybee disease that manifests in symptoms like an insufficient workforce in a colony, an absence of adult bees, and bees disappearing from the hive entirely. According to Dr. Jerry Bromenshenk, a honeybee expert from the University of Montana, CCD is a disease that we are very aware of, but we still don’t know why and how badly it will affect a given hive.

“In some cases, it takes them all out, but more often, it will take out 50 (percent) to 80 percent of the colonies in an apiary before it runs its course,” he said in an interview with The Daily Green. “In some cases, the beekeeper has picked up the survivors from several beeyards, placed them all in a common (holding) yard. Depending on whether these are ‘survivors’ or are still collapsing, the next visit is likely to show one of two extremes; colonies coming back, or all of them dead.”

The mystery surrounding the disease also lies with its tendency to come and go in waves, according to the USDA. Cases were prevalent from 2006-08, but there was a lull from 2009-11. Now studies have shown that CCD is once again becoming prevalent. A new federal report blames the disappearance of honeybees on their genetics and nutrition habits, as well as pesticides. While the number of bee colonies in the U.S. exceeded 6 million in the mid-1900s, we have as few as 2.5 million today. “With all of the news about CCD, beekeepers are looking for anything that can sustain bee populations,” Kaiser said.

At first, the argument was that humans should leave honeybees alone and allow them to live naturally, in hopes that their numbers would grow. But studies by Best Bee Company have shown that wild honeybee colonies rarely survive the long winters that Wisconsin and other Northern states are well known for. According to the study, the survival rate in urban settings is nearly 65 percent, while wild honeybees and honeybees kept in rural areas have a survival rate of about 40 percent.

“It would be a struggle,” Miller, the Eau Claire beekeeper, said of the insects’ chances  during  Wisconsin  winters. “A beekeeper’s job is to collect enough of their honey during the summer that they can give it to the bees throughout the winter for food.”

During winter, the drones and worker bees surround the queen bee, creating a large ball of honeybees to keep her warm. Over the course of the winter, the bees on the outside of the ball die off until the weather starts to become warmer. Most wild colonies would run out of honey before winter ends, which is why beekeeping is considered to be beneficial to the fuzzy insects.

Beekeeping in urban areas is growing in popularity, with laws allowing it in New York City, Chicago, Los Angeles, Minneapolis, and more. Even the Obama administration has a bee colony on the White House lawn, where roughly 70,000 bees pollinate the gardens and provide honey for White House meals.

“Beekeeping used to be a widespread hobby or enterprise for many across
a more rural America, but as we’ve become more urban, the bee population has suffered,” said Miller, adding that beekeeping can “help restore the health of the vital bee population.”

In bringing urban beekeeping to Eau Claire, Kaiser just hopes for a plan that is fair to everyone involved and says that experiments have been done to ensure that the process would be smooth and safe for both the bees and Eau Claire citizens.

“Honeybees don’t need our permission to take up residence in Eau Claire. They do it on their own already,” Kaiser said. “We’re asking the city to consider an ordinance on behalf of the otherwise law-abiding citizens who choose to help honeybees survive through winter and pollinate our beautiful city.” A honeybee is a fuzzy, social pollinator that only eats the honey that it produces. Unlike the hornet and the wasp, bees do not eat meat. They are considered the best pollinator in the world for many reasons, including the fact that their wings create static electricity that attracts the pollen from flowers, making it stick to them. They also are born with nectar sacs that allow them to carry more nectar, meaning more trips from flower to flower before returning to the hive.

Bees do sting, but only as a last-ditch effort to protect their hive and their queen. Because they are the only stinging insect with a barbed stinger, they die after the act. As long as no one threatens their colony or gets directly in their flight path out of the hive, bees leave humans alone. 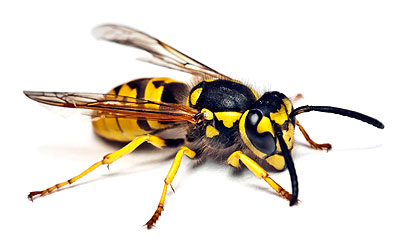 Hornets are the carnivorous cousin of the honeybee. These hairless insects are the ones that you find buzzing around when you’re trying to eat outdoors or enjoy a soda. While some hornets are known to pollinate, they aren’t nearly as effective as bees.

Because of their lack of a barbed stinger, hornets can sting as much as they want. Bees typically get a bad reputation thanks to these buzzing pests. This member of the family is also a carnivore, but is considered to be “one of the good guys” compared to the hornet, as wasps are well-known for being predators of insects that damage crops. Wasps are also capable pollinators, but are far less effective than honeybees.

Wasps are known to be aggressive and will sting whenever they feel threatened. Like the hornet, they can sting as many times as they like, and have no problem doing so in a pinch.