A Coat of Arms for Eau Claire? 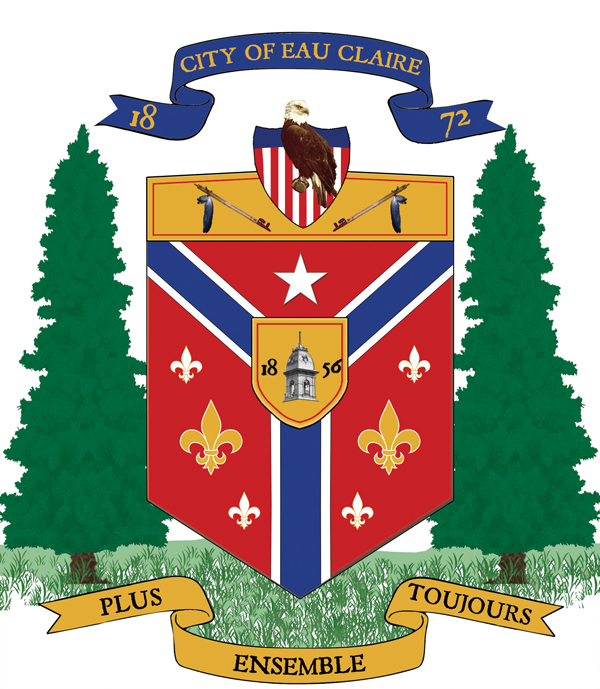 Imagine gathering all the symbols that represent Eau Claire in one place. What would you choose? The mighty Chippewa River and its more slender sibling, the Eau Claire River, certainly. Trees to represent lumbering. Something to honor the region’s indigenous inhabitants, no doubt, and something French too. And don’t forget our most famous avian historical figure, Old Abe the war eagle.

A potential coat of arms for the city would do all that and more. City Councilman Dave Duax is spearheading an effort to adopt such an emblem. Duax and City Council President Kerry Kincaid have worked with Eau Claire graphic artist Rachel Schimelman to create the coat of arms, which could also be used as part of the city’s official seal. A draft version of the artwork, which was unveiled by Kincaid at Eau Claire’s Own Birthday Bash at the Volume One Gallery on March 9, likely will be discussed by the City Council at its March 25 meeting; the council could vote to adopt the coat of arms on March 26.

The overriding theme of the coat of arms is cooperation, Duax says. “It symbolizes not only the rivers coming together, but the way we’re operating, the way we’ve worked together always,” he says. The rivers are represented by blue bands that join together (the “Y” shape across the red shield); two Native American peace pipes symbolize the meeting of two tribes, the Lakota and the Ojibwe, at the Council Oak that once stood at UW-Eau Claire; and the French slogan, “Plus ensemble toujours” – translated with the help of Gilles Bousque, the university’s interim chancellor and a native French speaker – means “More together always.” In addition, the tower of the original county courthouse is featured, a star symbolizes Eau Claire’s status as a county seat, and fleurs-de-lis represent the entities (two villages and four townships) that were united to create the city in 1872.

Schimelman, who runs a firm called RS Design, has done a host of graphic and Web design and photography but had never been asked to create a coat of arms before. She enjoyed the challenge of converting local history into old-fashion heraldry.

“The history is very long here in Eau Claire, and because of that I think it lends itself to more of a classic representation than a modern representation,” she said. Schimelman, who moved to the city in 2008, said the process taught her a great deal about the city, and she hopes the coat of arms provides an education for others as well.

“Not only is it historical, but it’s eternal,” added Kincaid, who praised Duax for pursuing the project. “It’s trying to get the essence of what made our city and what still makes our city.”

Kincaid expects the council to discuss the proper use of the coat of arms, but she doesn’t anticipate them seeking many changes. “I don’t think council members see themselves as on-the-fly graphic artists,” she said with a laugh.

If it’s approved by the council, Duax hopes the coat of arms will be displayed on the wall of the council chamber at City Hill. In the future, it could be used on letterhead and city documents (the city currently uses two unofficial logos for such purposes) or even on city vehicles and signs. Furthermore, the coat of arms – set within a disk and surrounded by the appropriate verbiage – could be adopted as the city’s seal, which is affixed to  official documents. (Currently, the city uses a much simpler seal featuring a pair of lumberjacks.)

Duax is hopeful that the city will embrace the symbol.

“It’s something that’s going to grow on people,” he said.