Local Yuks on the Rise GETTIN’ GIGGLES. Whiskeys goes the distance to create a solid “comedy club vibe” in their large space by curtaining off a more intimate area ready for laughs.

With a cluster of tables, a brick stage backdrop, a single mic and a couple of guys angling for laughs, the scene could be a comedy club in any big city.

On a recent Wednesday, however, the setting was Whiskeys Grill and Bar in Altoona, home to the recently launched Laugh Lounge, a weekly stand-up comedy showcase. Each Wednesday night a portion of the eating and drinking establishment is transformed into an intimate comedy club with the help of black curtains, a fake brick wall and a pair of traveling stand-up comics.

Whiskeys began the Laugh Lounge in late September as a way to fill an unmet niche in the local entertainment scene, said marketing coordinator Joanna Honore. Plenty of venues feature food, drinks, bar games and music, she noted, but not many offer live comedy on a regular basis.

That’s beginning to change. Coincidentally, the Ramada Convention Center in downtown Eau Claire recently relaunched its LOL in the Valley comedy series on Thursdays, bringing the Chippewa Valley’s weekly professional comedy nights from zero to two in a matter of weeks. (See story below.) Meanwhile, Pizza Plus, also downtown, has hosted a number of high-profile comedians in recent months, including Louie Anderson, and Ron White performed again at the State Theatre in September. (TV funnyman Tracy Morgan will take the State stage in March.)

Honore said a number of the comedians who have performed at Whiskeys have played off the crowd and regional stereotypes. (It probably doesn’t hurt that many of them are from the Twin Cities, a hotbed of wisecracks about Wisconsinites.) 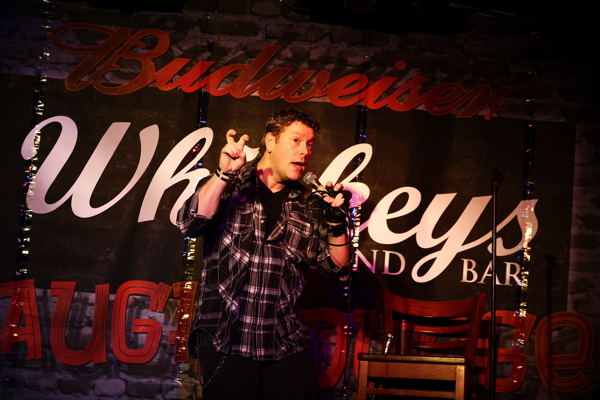 The Dec. 19 show, which featured Minnesota comic Nate Abshire and headliner Randy Chestnut of Madison, included a host of jokes about cheese, flannel shirts, and camping, not to mention plenty of material covering traditional stand-up topics such as bad jobs, dogs and cats, the differences between men and women, and – of course – sex.

“While we don’t guarantee the comedians won’t get a little raunchy at times, the comedians we’ve had so far have been very funny and appropriate,” Honore said.

Whiskeys has booked comics who have appeared on everything from Showtime and Comedy Central to the Bob and Tom radio show and The Late Show with David Letterman.

Considering that most entertainment options are offered on the weekend, why bring in comedians on Wednesdays? The answer is in the question: Honore says Wednesday night shows give patrons a chance to go out in the middle of the week and avoid interfering with weekend events at Whiskeys. (And, of course, touring comedians typically like to play bigger cities for bigger paychecks on Friday and Saturday nights.)

So far, Whiskeys has been pleased with the public’s response to the Laugh Lounge – particularly the fact that it’s brought in new customers.

“It seems to attract people that might have second-guessed themselves before walking in the door before, but now those people come back every week to see what is new and what we have going on for them,” Honore said.

Weekly comedy shows kicked off again recently at the Ramada Convention Center in downtown Eau Claire. Since early November, the convention center’s main ballroom has been converted into a comedy club at 7:30pm on Thursdays for LOL in the Valley. Operations manager Kevin Brossart said shows have drawn an average of 300 patrons to see a variety of stand-up comedians from as far away as Boston and California. Local comedians have emceed the events. “It’s perfect for a comedy show, with the spotlight, the lights, the room,” Brossart said of the venue, which is more often used for conventions and wedding receptions. Brossart plans on booking comedians each Thursday through at least March or April, then switching to hosting shows a couple of times a month when the weather gets warmer. He also hopes that crowds grow to the 400 to 500 range to create more of a party vibe and to generate more post-performance business at Porter’s Restaurant and Bar, which is located in the Ramada. Recent performers have included Dave Johnson of the Twin Cities, Gary Keshner of New York and Minnesotan Scott Novotny, whose credits include appearing on ABC’s “America’s Funniest People” and writing for “Saturday Night Live.” Brossart said the Ramada aims to book a wide range of comics. “If you don’t like the ones this week, you’ll like the ones next week,” he advised. Tickets are $10 in advance and $12 at the door. You can find more info on Facebook. – Tyler Griggs