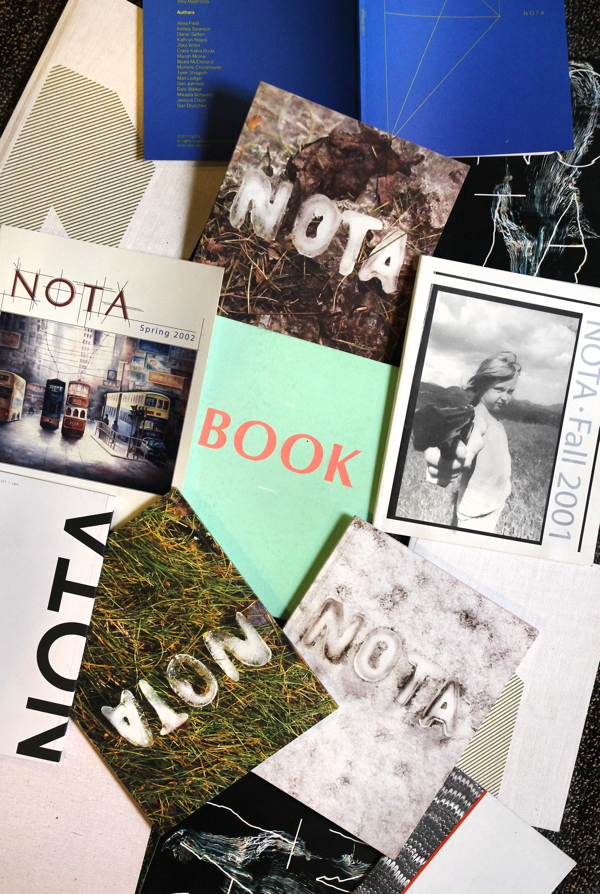 This month NOTA is celebrating its 40th anniversary. First starting in 1972 the biannual publication has come a long way from its inception. Once just a glorified newspaper leaflet it has now flourished into a National Print Awards Certificate of Merit winner. “Essentially this means that, now, anyone who gets published in NOTA will receive national attention,” Editor-in-chief Anna Field remarked about the award.

Since the creation of NOTA submissions to the, now award-winning publication have been kept exclusive to the UW-Eau Claire students. Both the literary and arts portions of the compilation have an open submission format to students, but then later have an anonymous voting session to decide exactly who be featured. “The art contributors do a submission event where they put their works on display; usually in one of the Haas galleries,” Elle McGee co-director of arts for NOTA stated when asked about the art submission format. McGee works alongside Kaitlyn Bryan as well as Brenna Signe and Serena Wagner in a collaborative effort to put on these events on top of their other NOTA obligations (such as completely designing the layout of the book!). Only recently, in 2008, has the publication began to print in color which only helped add to the boldness of the artwork.

Another notable aspect of NOTA is not only the fact that it is student written and published, but also student printed. Working alongside UW-Stout’s Graphic Communications Management Program over the past several years Anna Field and the other staff have been more than pleased with the results. “I just love that it adds to the student-exclusiveness of [NOTA],” Field expressed about the uniqueness of the publication.

A notable aspect of NOTA is not only the fact that it is student written and published, but also student printed.

Introduced in Fall 2011 NOTA added a new, music section the popular anthology. Still exclusive to university students, the music section showcased several bands, artists and DJs despite having such a limited selection pool. In an effort to promote the newly added section the staff planned on including a spotlight to showcase some of bands and artists at NOTA’s birthday on December 13th. Both McGee and Bryan noted that several artists had already been making appearances at the open reads (generally held every third Thursday of each month), which prompted several of the staff to invite them to the celebration. The festivities will also be host to a poetry read as well as the release of NOTA’s Fall 2012 edition and an art gallery showcase featuring the top ten artists from this fall.

With the growing success of NOTA the staff is constantly making adjustments to the book. “There are about five of us who essentially oversee the entire production of the book,” Bryan said, “We’re all kept pretty busy each semester and the fact that we re-designed the entire layout this semester just added to the stress.” The women remained secretive about the new design hoping to build excitement for the release party.Though the book has made some NOTA-ble changes over the years Field is excited to usher in the new generation of NOTA staff members, writers and now, musicians into the NOTA family. “I’m thinking of trying to do some writing workshops for the spring edition…” Field stated about the future of NOTA and her continuing role as editor-in-chief. Field went on to talk about how she would like NOTA to enter more national competitions and get more acknowledgement, but worries that with its growth the exclusiveness to the university could disappear.

Nonetheless these ladies work diligently day after day to provide you with the fabulous result that gets produced twice a year. The sky is the limit and hopefully NOTA will continue to thrive along with the artistic culture of the university and surrounding area.

NOTA’s 40th anniversary party will be held on December 13 in Phillip’s Recital Hall at 7pm. All music can be listened to/downloaded at NOTAmusic.bandcamp.com. Artwork can be seen at cargocollective.com/NOTA.