Across the Taylor Verse Bruce Taylor has been staring out the window since high school, translating beauty into language and extracting meaning from everyday sights. His eighth collection of poetry, The Longest You’ve Lived Anywhere, emerges as a product of years of writing and looking... and of “giant” cups of coffee.

The retired professor says he used to tell his students, “The poems are out there: just look out the window.” From his new vantage point on Lake Hallie, where he and wife Patti See moved recently, Taylor jokes about new sources of inspiration. “Now I look out our windows and I see geese, muskrats, woodchucks, and golfers ... It’s like Disney designed a place for an old dude to retire,” he says, chuckling.

Yet the book’s subject matter encompasses much broader turf. Published in October, The Longest You’ve Lived Anywhere merges new work with previously published poems, resulting in a  panoramic view of Taylor’s sensibilities. Throughout the book, poems tread a balance between a beautiful fullness and an aching emptiness. Idleness is tempered by a sense of urgent preparation. The poem “Everyday” illustrates this keen awareness of time: “The first cold morning you’ve / already brought in wood / for the fire you finally need.” His control of syntax allows images to flip and flutter in your gut. In “At Mirror Lake,” clouds do not overflow with water. Instead, “water overflows with clouds / thirsting for rain” which is paradoxically, visually true.

The collection of eighty poems is stylistically representative of Taylor’s body of work in that it showcases both unrhymed free verse and forms (like villanelles and sestinas) which follow strict patterns. Though he started writing free verse in high school, he didn’t always think fondly of traditional forms. 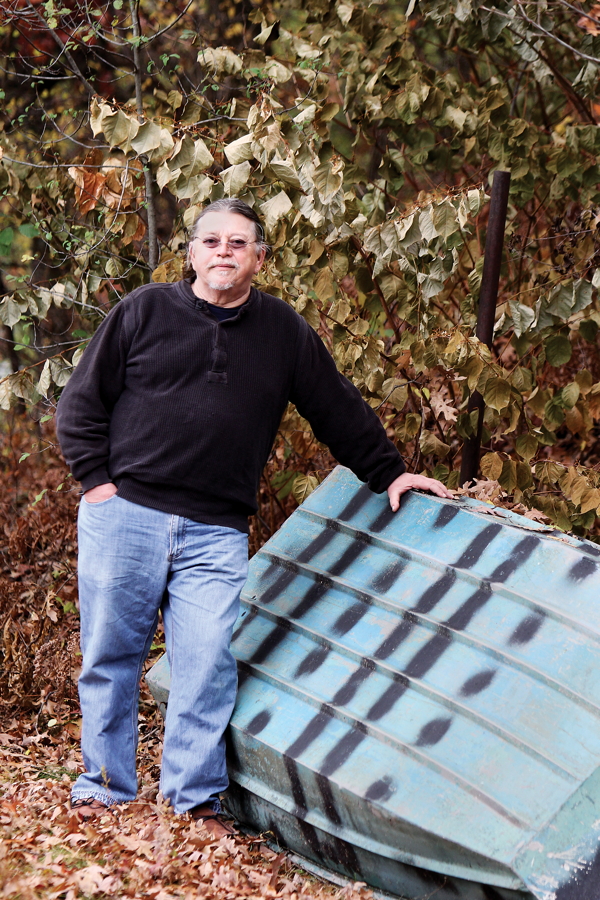 Poet Bruce Taylor with the boat featured on the cover his new book The Longest You’ve Lived Anywhere.

“When I was younger, I would say things like ‘The sonnet is where old poets go to die,’” says Taylor, affecting an exaggeratedly wise voice. “I had that influence of the Beats, that anti-traditional form,” he explains. As he’s gotten older, he realizes that fear of ineptitude may have underlied a refusal to try different formats. Now, having honed his craft, he says he’s able to handle them.

“There are things you can say and do [with forms] that you can’t do in free verse,” he says. “It keeps the poet from talking always about themselves. Instead of staring down at your navel, it helps you start staring at the world a little bit.”
Taylor’s approach to publishing has also changed with the times. This is the first book he’s published through Createspace, an online independent publishing tool. “I haven’t had this much control since way back in the 70s when I was mimeographing and stapling books and selling them out of the trunk of my car,” he says of the method that basically erases the “middleman” publisher. “Now you have all the distribution networks open to you that any publisher does,” says Taylor. With awards and Fellowships under his belt from the Wisconsin Arts Board, Fulbright-Hayes, the National Endowment for the Arts, and the National Endowment for the Humanities (to name a few), Taylor’s work advocates for itself.

Recently, Taylor has also enjoyed local recognition; he is the current Poet Laureate of Eau Claire. With the role comes the unique responsibility of writing two poems about the city, and Taylor believes he has already (inadvertently) completed this task. In The Longest You’ve Lived Anywhere, references to the “5 o’clock Club,” “the Elbow Room,” and their respective characters (“Little Elegies: 9 PM”) or a kitchen radio that plays “WAYY” (“Our Back Yards”) are necessary ingredients to the poems they appear in.

Also a fiction writer, Taylor has had quite an impact on the “writing community” here, even as it waxes and wanes over the years. This year, he hosted an open mic poetry series at the Acoustic Cafe called OUTLOUD, which perhaps marks a revival of the genre locally. Almost single-handedly, he advocated for and succeeded in introducing creative writing courses into the curriculum at UW-Eau Claire.

Taylor is a living example of the advice he once posed to his students, including the mantra that writing is a verb, not a noun. “It’s not anything you’ve written, it’s the act of writing. You can think about it, talk about it, plan it, but you have to get your [butt] in the chair... I told my students, ‘you should be writing poetry in the back row of your biology lecture.’”

Would-be writers and friends alike are often surprised at the level of discipline Taylor can pull off. But to Taylor, it’s not discipline – it’s a natural way to spend time. “It’s one of the two or three things I like to do best in the world,” he says.

The Longest You’ve Lived Anywhere is available at Amazon.com, Barnes & Noble and The Local Store.