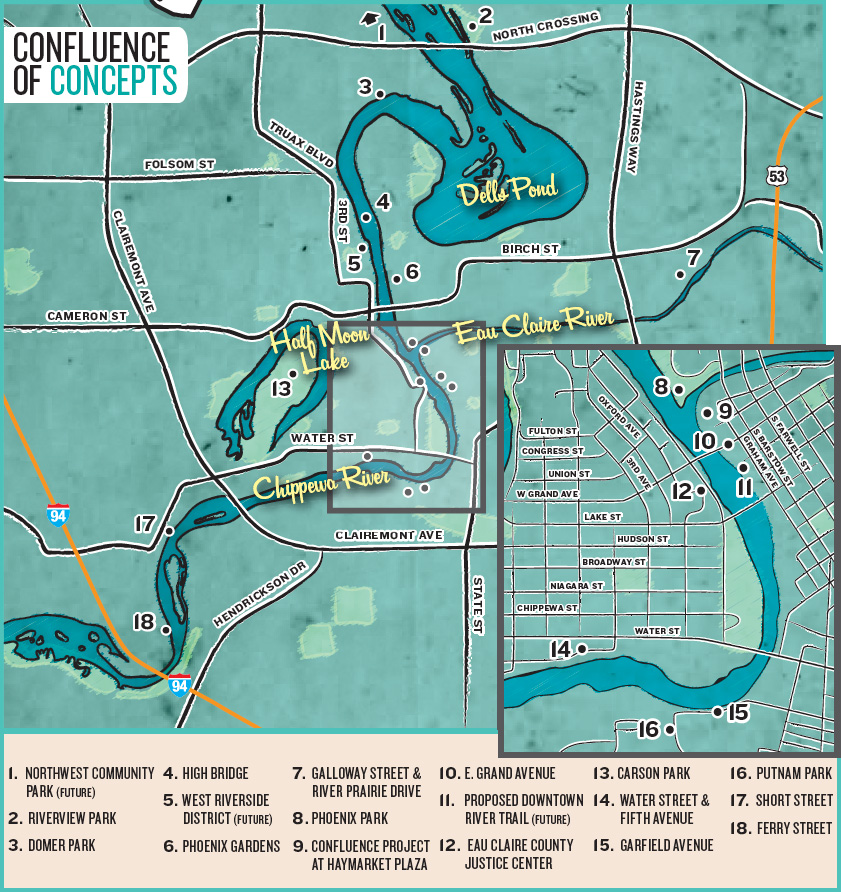 If you were to scan the Waterways Plan and various downtown plans looking for major riverfront proposals, the concepts described here are what you’d see. We went through hundreds of pages to find the most exciting ideas to extend trails, add access, improve views, inspire development, and connect neighborhoods to the rivers. Often these ideas are visions for the next 20+ years, and though they may seem like pie in the sky, you might be surprised how many of these plans already have momentum. Use the corresponding numbers on the map to make sense of what goes where.

The most glaring need for access is on the Eau Claire River Corridor. While the Chippewa is enormous and open, the Eau Claire is a winding gem with rocks, little rapids, and natural surroundings that kayaking and fishing enthusiasts Would love.

If there’s one thing to take away from the Waterways Plan, it’s the need for increased access. While trails, development, branding, views, and other topics are no doubt stressed, the sheer frequency of suggested access points is staggering. Riverview Park 2, one of the few public launches on the rivers, “is near capacity on summer weekends,” the plan states. So the reason for the access mania is a simple case of supplying for the demand.

The most glaring need, Parks, Recreation, & Forestry Director Phil Fieber said, is on the Eau Claire River Corridor. While the Chippewa is enormous and open, the Eau Claire is a winding gem with rocks, little rapids, and natural surroundings that kayaking and fishing enthusiasts should love. In fact, it is the terrain and lack of open spaces that make natural launch options difficult, but the Waterways Plan details a 25-acre area where Galloway Street meets River Prairie Drive 7 that they plan to dedicate as a park with a footpath down to a launch.

The Water Street Business Improvement District’s hope to develop a Chippewa River overlook and landing/launch at the foot of Fifth Avenue 14 has the support of the Waterways Plan, and BID member Lisa Aspenson said they’re continuing to discuss their plans for it. Funds have been set aside for what they hope can be an attractive overlook along the trail, as well as a place to touch the water and mark its history as a riverboat landing site. She added that aesthetic details are being discussed, such as large planks, wrought iron, and boulders to tie back to the aesthetics of Phoenix Park 8 and downtown trails.

The downtown plans have shown two physical access ideas thus far. The first, and most often shown, is a public plaza at the Haymarket Site 9 of the confluence that leads right down to the water and could be used for fishing or launching a tube, kayak, or canoe. The vision plan put together by Downtown Eau Claire, Inc. (DECI) and the South Barstow BID also had a rendering of a public dock/pier. In the plan’s text, it states they’d like to explore a pier or platform, launch or landing, and/or even a small dam that could allow for tourist attractions like boat rides.

The West Riverside District Plan 5, despite having to contend with a steep bluff face, mentions the possibility of stairs going down to the water. Benton Avenue is another mentioned in the Waterways Plan for potential stairs down from the bluff.

There’s an open space on Ferry Street 18 (across from the wastewater treatment facility in Shawtown) traditionally used as a launch, and the city has taken notice. The plan has formal improvements in line for public access of particular interest for fishing, boating, and canoeing. If the city can negotiate with Xcel Energy (who owns the land), they’d likewise like to build a boat landing just north of Domer Park 3. There are also hopes for a canoe launch/landing on the Chippewa River near Short Street 17, and improved shore fishing just below the Xcel Energy dam and another spot along the causeway to Carson Park 13.

Perhaps the biggest campaign of the 1988 Waterways Plan, trail extensions are also stressed in the updated version, with nearly every shoreline slated for development getting a trail (if it doesn’t have one already).

“And not just a four-foot sidewalk, but serious trails that connect where people live to the places they work and play,” Parks, Recreation, & Forestry Director Phil Fieber said. Indeed, the plan states that paths would ideally be at least wide enough for both bikes and pedestrians (in some cases more than 12 feet wide).

Several plans that encompass downtown unanimously mention a riverfront trail 11 on the east side of the Chippewa River from the Lake Street Bridge to the confluence – potentially a trail with overlooks, undefined nodes of interest, likely water access point(s), and possibly a short pedestrian mall on East Grand 10 with an entertainment plaza right next to the trail. Several plans likewise mention a pedestrian bridge to Phoenix Park 8 from the Haymarket Site 9 that “should be designed with a very high degree of aesthetic care, as it will be quite visible and could potentially become a positive and frequently photographed symbol for the city.”

From there you could take a variety of trails through Phoenix Park 8 up to Forest Street, where the linear green space that holds Phoenix Community Gardens 6 is slated for a winding trail that connects to the High Bridge 4 over the Chippewa River near the Cascades paper plant. The parks department is planning to reclaim that bridge for bike and pedestrian use hopefully within the year. “The experience of crossing the river from this height will be thrilling,” the Waterways Plan states. Indeed.

Not only will physical access to water and trails on the shore draw people in, but the city is hoping to make extra steps that will visually and physically connect nearby neighborhoods to the water.

Plans to do so include overlooks, overlooks, and more overlooks. That includes possible overlooks at the end of downtown streets (Eau Claire, Grand, Main, Gray), an overlook at the foot of Fifth Avenue near Water Street 14, overlooks in the future Northwest Community Park 1 , overlooks on the West Riverside 5 and Benton Street, and the closure of Garfield Avenue 15 on UWEC’s campus for pedestrians only and, you guessed it, some river overlooks.

The Waterways Plan likewise touches on enhancements to “the walking experience,” which would include better lighting, sidewalks, and trees along the river walks along downtown and the West Riverside 5, if not more.

And though some people fought the ultimate location of the Eau Claire County Justice Center 12 because of its proximity to our riverfront and downtown, plans for the riverfront greenway at that location aim to please. They include improved trails, a veterans’ memorial at the Lake Street bridge, an outdoor stage for Chippewa Valley Theater Guild, some seating, and public art.

Just as Phoenix Park 8 spurred riverfront development, several city plans expect that success to spread to areas such as the Haymarket Site, Graham Avenue, West Riverside District 5, and possibly River Prairie Drive. While it will start with park and trail investments, eventually it will lead to new retail/commercial/residential sectors with more jobs and an increased tax base.

Said developments will be encouraged to have windows facing the waterway, plazas, decks, or balconies, and to use materials like clay brick, wood, stone, low-reflective glass, and accent metals – according to the plan, which cites the RCU Headquarters as a shining example. They’re additionally asked to be well landscaped and provide appropriate demarcation between public and private uses.

Preliminary designs for the West Riverside District 5 (roughly from The Oxford to the High Bridge 4 ) show a mixture of neighborhood and retail, and a welcomed makeover for an area currently blighted by old industrial buildings. Economic Development Director Mike Schatz said the neighborhood is hoping for an end result that’s comparable to Phoenix Park 8 , with aesthetics that tie them together but still make them distinct.

The area at the confluence of the Eau Claire and Chippewa rivers 9 (opposite Phoenix Park) is tentatively planned for a plaza, river walk, and pedestrian bridge with an “anchor” development of a major arts facility and student housing mixed with retail (an $88 million project announced just this summer). The development is known as The Confluence Project, a collaboration among Commonweal Development, Market & Johnson, UW-Eau Claire, and Eau Claire Regional Arts Center.

“This is a game-changer,” said Ben Richgruber, ECRAC’s executive director. “This is an anchor, and private investment will follow. Property values will go up, and the city tax base will go up. Development can’t help but happen.”

There’s no telling what the rest of Graham Avenue could become, but DECI’s Master Vision Plan details hopes for an independent hotel serving tourism, visitor, and commercial segments for the entire region. Other sketches show outdoor dining and shopping along the riverwalk, where businesses can capitalize on improved views and foot/bike traffic.

The Waterways Plan adds, “Of particular interest would be businesses that cater to water sports such as paddling, floating, or fishing. … Such businesses would serve not only local residents but, more importantly, those from out of town who might also use local restaurants, motels, and shops, particularly downtown or along Water Street.”

Fieber said the 25-acre site where River Prairie Drive meets Galloway Street 7 (and where the city hopes to create a river launch) could be another area targeted for retail/commercial development. Pat Ivory, senior planner of community development, said there are other areas the city has identified for possible riverfront development. This includes the area between the railroad bridge and Madison Street (after the First Avenue pedestrian-only trail), where about a dozen homes reside on the river, but no specific plans have been outlined.

“Bank stabilization” will involve the use of boulders and low plants (also known as “rip-rap”) in those areas protected from powerful current erosion (known as “armored”). Some existing armored areas may have unsightly concrete, which they intend to cover with soil and low plantings. Natural riverbanks will remain as they are, and shorelines near business districts may require retaining walls or stone terraces, according to the plan.

“Opportunities will be sought to preserve or create dramatic views to and across the water whenever feasible,” the plan states. This could include clearing some trees and brush, some raising of tree canopies, and/or building overlook points with benches or cantilevered decks. “Some potentially impressive vistas are obscured by trees and could be improved without drastically harming the forested effect of the waterway edges,” the plan concludes. 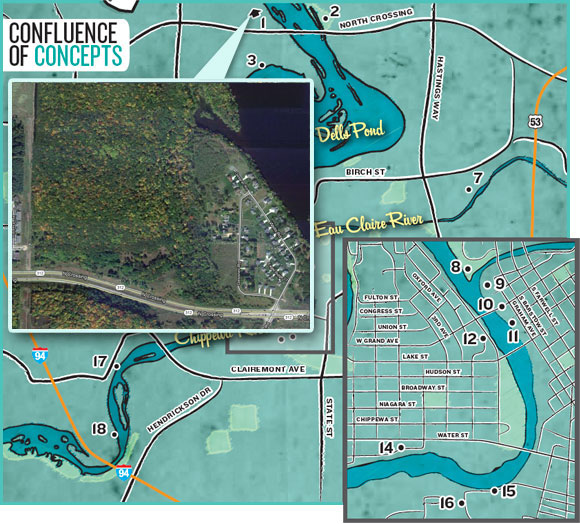 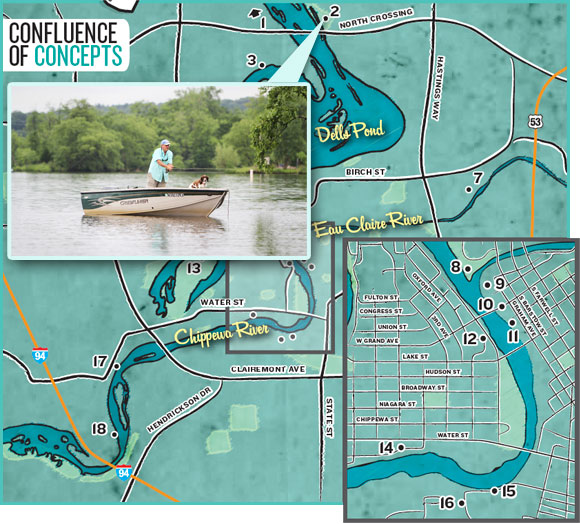 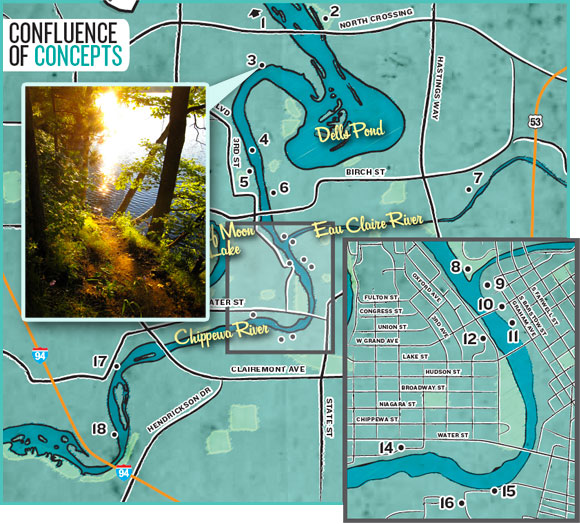 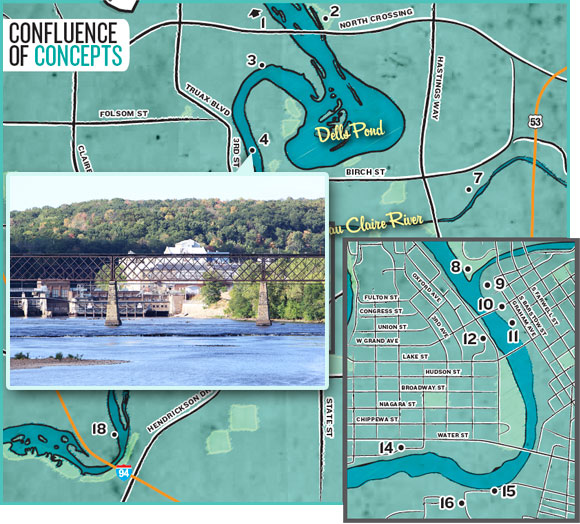 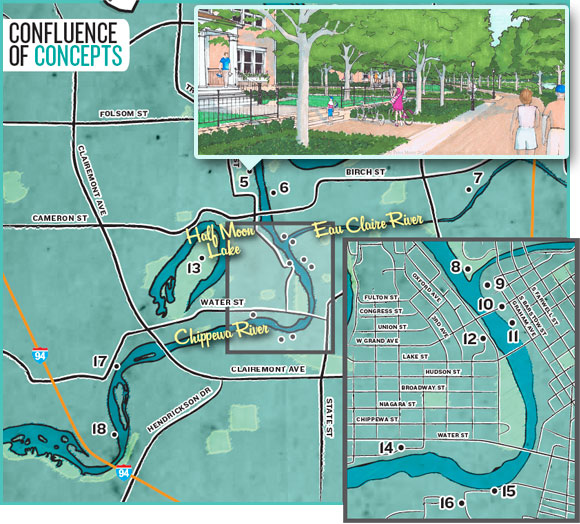 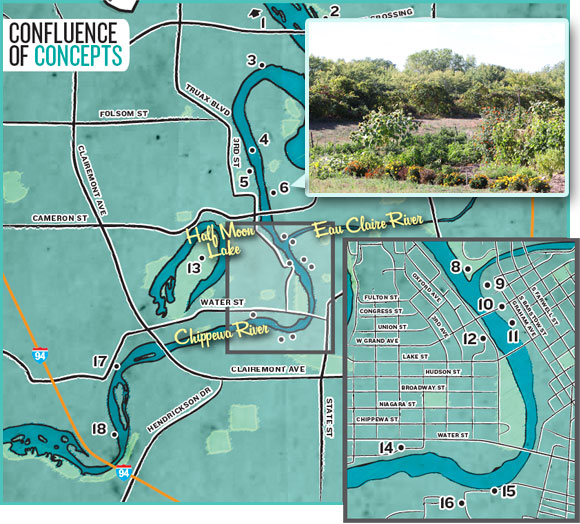 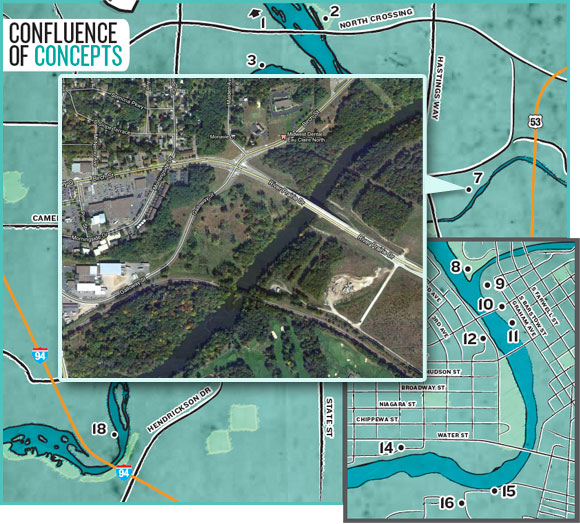 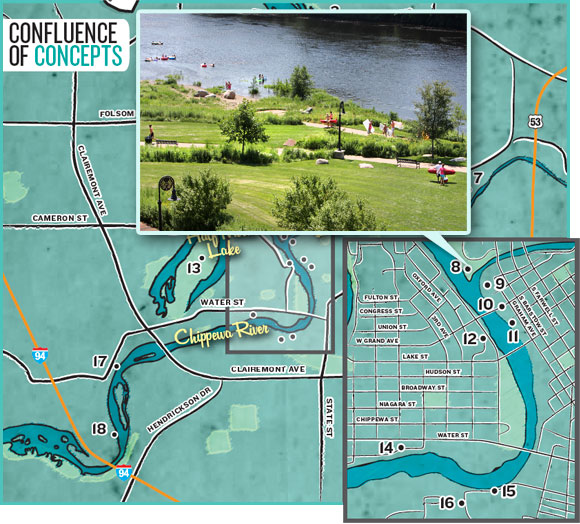 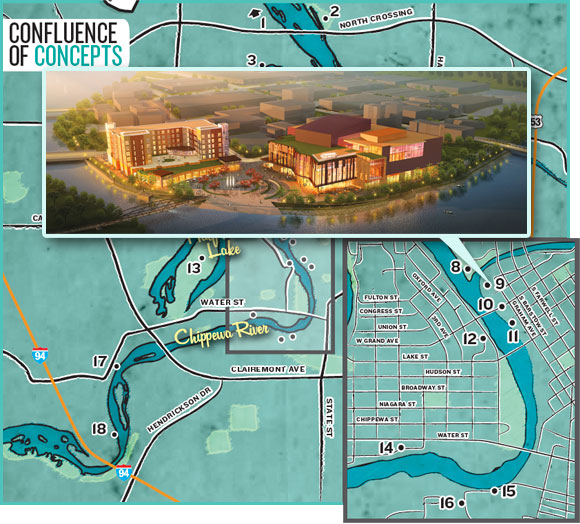 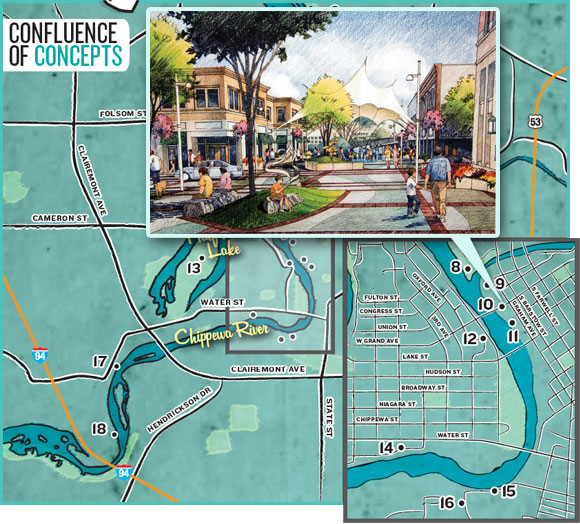 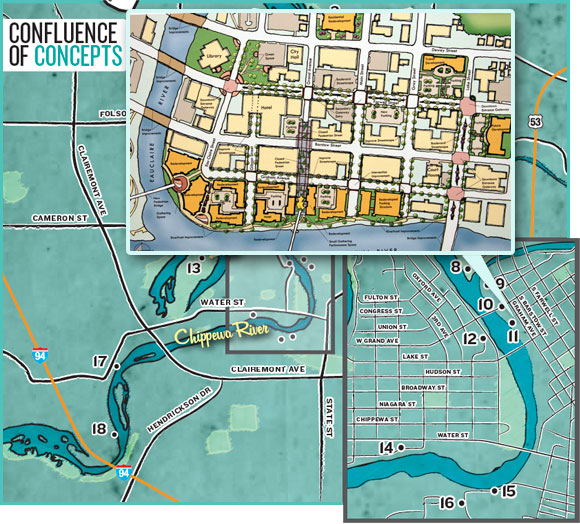 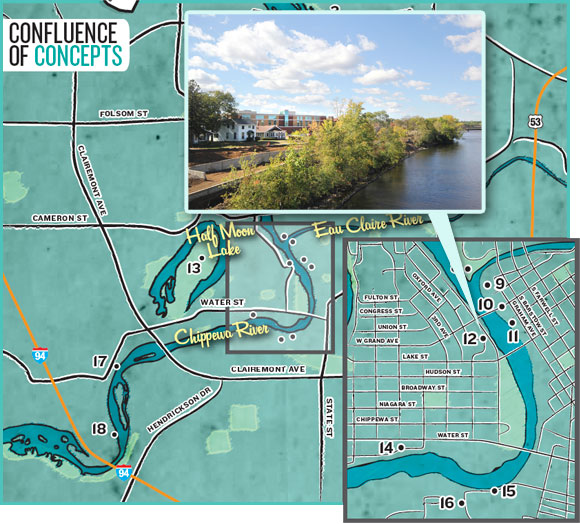 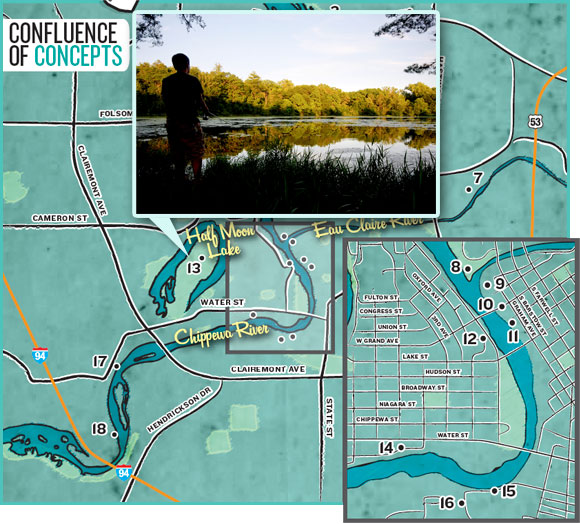 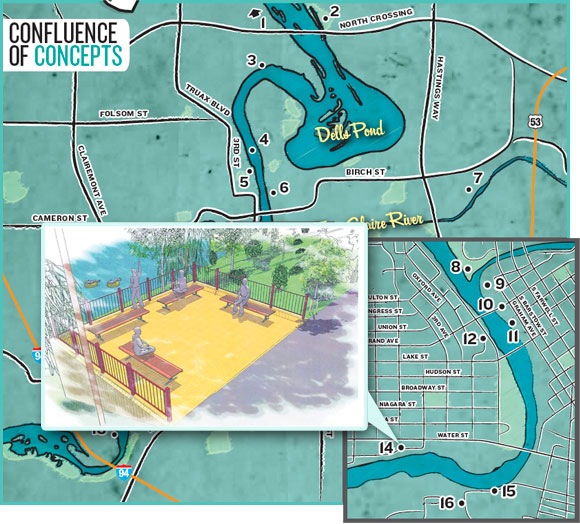 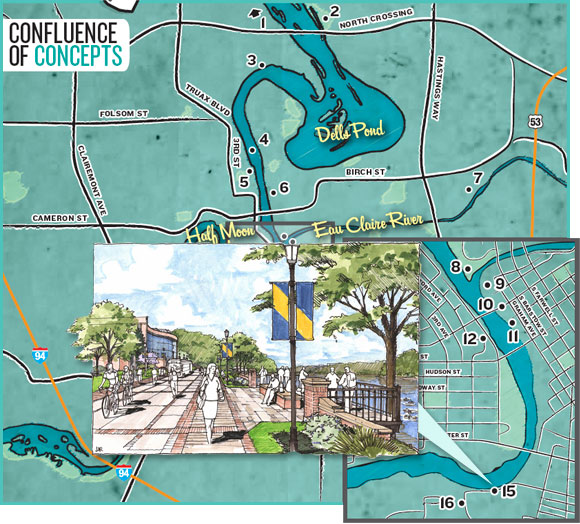 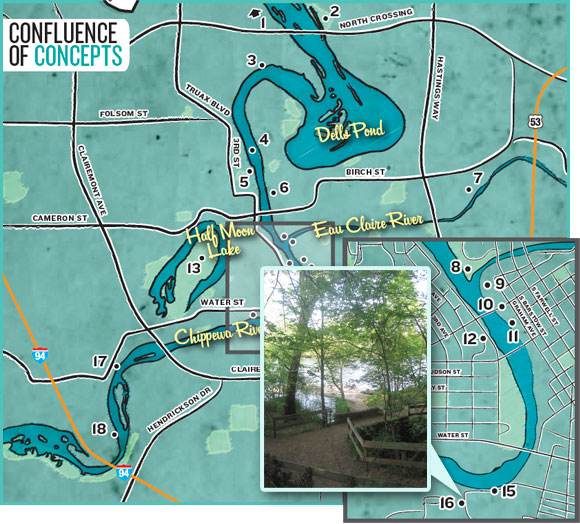 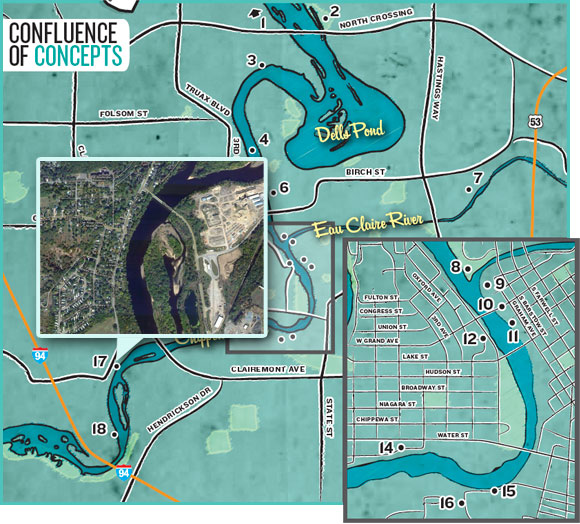 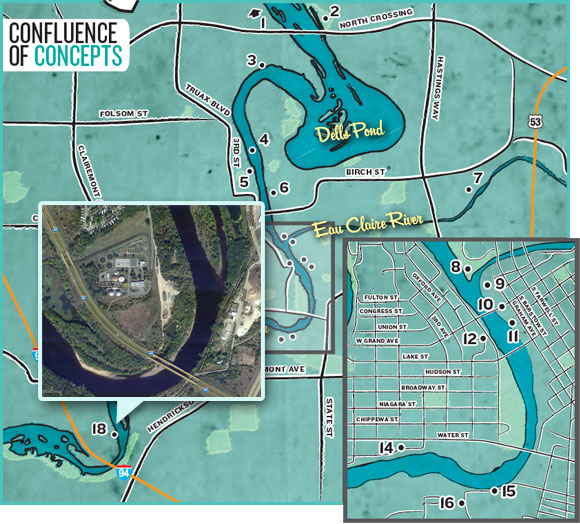