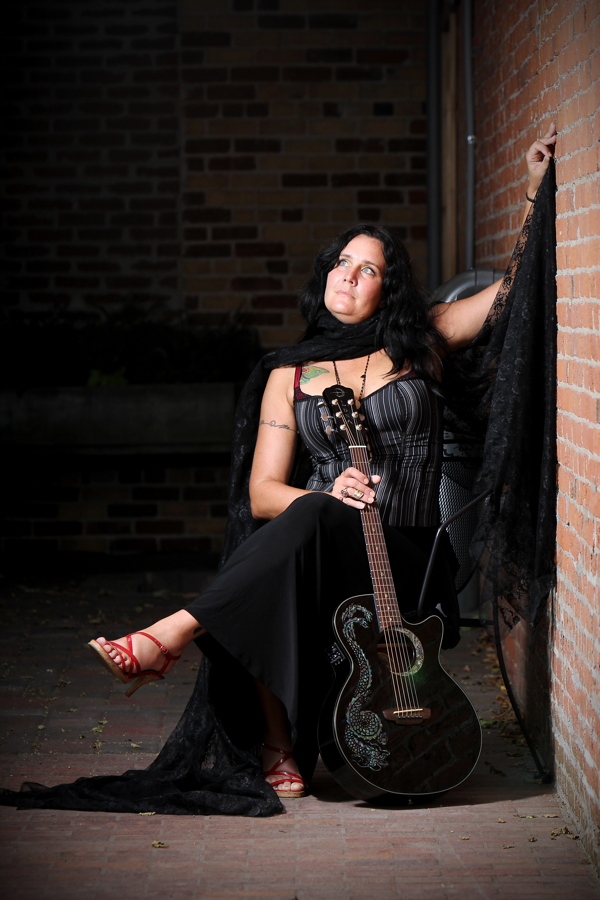 Jessica Norman, aka, Voodoo’s Dream, hopes her music can “touch the hearts of people who may have been wounded internally.”

The demeanor of the interviewee sets the tone of the interview. A genuinely kind person makes the interview feel like a vacation, and Jessica Norman, one-woman act for Voodoo’s Dream out of Appleton, is such a person. Naturally open, Norman began with an anecdote about how she and her husband met on a blind date. Ten days later he proposed, and they’ve now been together for 21 years. It is reasonable to imagine that some of Norman’s music is infused with this same earnestness and belief in love and family. Norman, 42, is originally from Chippewa Falls, and will be formally releasing her debut album In Bed With You at the Heyde Center for the Arts on August 17.

Norman, a stay at home mom, has been involved with choir and conducting her entire life. She has written music with her son, learned guitar from her husband, and begun performing all within the past five years.  Norman’s family is extremely important to her – she and her son cowrote “Firefly” on the album, and he’ll be coming home on leave from the Marine Corps for her release show. All four of her children are involved with the production at the Heyde Center; her three daughters will dance.

Norman’s husband and manager, Dan Holum, is also a huge blessing. “He doesn’t question my artistic flair and he is everywhere that I need him to be,” says Norman. Along with music, she has played lead roles with ECCT, and has done work backstage. “... I love the technical aspects too. I try to understand every aspect of everything I do... try to get my feet wet.”

This, it seems, is what Norman’s music is all about. She tries something, likes it, and then explores it in her own diverse ways. As a result, her music doesn’t have a definite genre. It’s been labeled New Age, but Norman herself doesn’t know what it is. She grins while telling me about how the previous night at the Stones Throw she open-mic’ed a kind of “rock opera thing” with other performers. Overall, Norman’s is a sleepy, seductive melange of sounds (she uses sheet metal, chains, and tambourine) fused with more traditional instruments. Beyond the range of instruments, Norman invited a range of musicians to round out the project -- all told, seven musicians added their talents to the mix.

Norman hopes that her music can “touch the hearts of people who may have been wounded internally and lift them up, help them to not feel so alone... there’s a lot of truth in my lyrics.” Influences include Van Gelis, My Morning Jacket, Chris Isaak, and the lyrics of Townes Van Zandt.

The title of her album, In Bed With You, is something Norman invites listeners to interpret however they want. For her, “It’s sleepy music...you wake up and it lulls you back to sleep. It makes you calm.” But, she says, “I’m totally fine with people taking it how they want. I am a very sensual being, and I embrace that. I think people should be more comfortable with their sensual side.”

On the album, “The Darkest of Nights” stands out as a haunting tune about finding your way home, and “The Crow” was inspired by the aftermath of the 2011 earthquake and tsunami in Japan. Norman will contribute 50 cents from every single sold of “The Crow” and $1 from every CD to Globalgiving for Japanese relief. Both “The Crow” and “Liza Lies” feature music videos on YouTube for the full audiovisual experience.

Regarding the album release show, Norman thinks that people should get what they pay for. “I believe in being very connected with the audience.” She has big plans for the evening. “I’m pulling in impressionistic dancing, shadow dancing, and acted out scenes,” says Norman, “The battle between good and evil, with constant change in player placement. At the end we’re going to wake the audience up ... and rock people out the door.”