Now hanging at the LE Phillips Memorial Public Library, The Art of Volume One: Ten Years Covering the Chippewa Valley showcases the original artwork used for Volume One Magazine covers.

Over the course of Volume One’s 10-year history, there’s no question the organization and publication have continued to evolve. That said, the focus and core mission have remained the same: local culture. And for proof, you need look no further than the cover.

With no exception, every one of Volume One’s 205 magazine covers have featured artwork with local ties. And now, thanks to LE Phillips Memorial Public Library, that feat is being honored with a retrospective exhibition that began June 4 and runs through Sept. 4, all as a part of Volume One’s 10-year anniversary celebration.

The Art of Volume One: Ten Years Covering the Chippewa Valley showcases both the publication cover and original artwork, side-by-side, illustrating an interesting contrast between in-person and in-print. The showcase is a sampling of covers, selected by the library’s art committee, that spans a myriad of media (photography, painting, illustration, etc.) created by artists that are now located around the globe.

Selected pieces include familiar local artists such as Anders Shafer, Paula Gorski, Gail Schellinger, and more, as well as nostalgic images you’ll no doubt recognize. Remember the fishing scene created with yarn? How about the floating sheep, yarn tree, or retro jazz trio? They’re all there, plus more. All told, there are about two-dozen pieces on display. And stop by on June 21, from 7 to 8:30pm, for a public reception that will include appearances by several of the artists and Volume One staff.

“Volume One has been a great outlet for artists – like a mobile gallery,” said Ned Gannon, who helped put together the show and also has his Revolt of the Trees cover on display. “This show is like experiencing the history of the magazine and, in many ways, our entire art scene. And it gives a sense of anticipation for the future.” 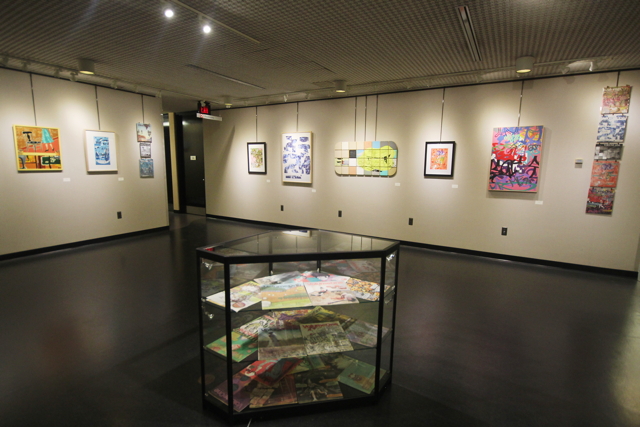