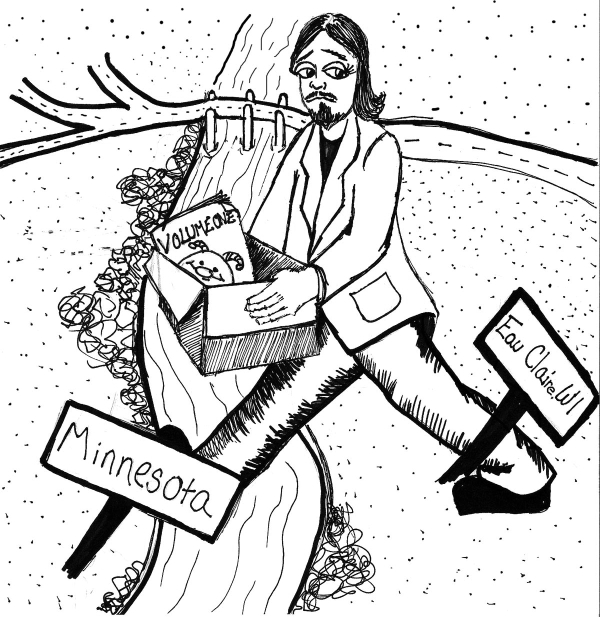 Usually at this point you’re buckling yourself up to read about riveting local happenings and Volume One’s take on what it means to the progression of our community. If you’ve already done said buckling, I apologize, for this is not that kind of news. This is the sad and unfortunate kind. So undo your V1 Excitement Buckle and strap on your Tear Soaker 2000 Buckle. Is it on?

I’m no longer an Eau Clarian or Volume One’s managing editor. As of June 1, I am a resident of Minneapolis’ Prospect Park Neighborhood, where I’m joining my fiancé Ashley, who after looking around here as much as possible, recently landed a job at the University of Minnesota. The new “me” for Volume One is Thom Fountain. No, he is not exactly like me. Yes, he will do great. And, yes, he deliberately spells his name that way.

The reality is sinking in for me now that the things I’ve been excitingly anticipating are just now starting to line up. Just as I’m leaving.

So I’m leaving – big deal, right? Well I think my case is sort of special because this is the second time I’m leaving Eau Claire to live elsewhere. And I gotta say, the circumstances in which I’m leaving this city couldn’t be more different.

The first time I left Eau Claire was in 2006, when I graduated after four years at UW-Eau Claire. Though I thoroughly enjoyed my time here as a student (and Volume One contributor), I couldn’t wait to leave. My mentality wasn’t much different than most students: This area doesn’t have jobs for me, I’m destined for big (market) things, and I’ve experienced everything this city has to offer. Now, to be fair, there are not a lot of arts/journalism jobs around here (and big markets tend to have lots). Plus, I was very active in off-campus exploration, so I’d been around the block.

During my two years away, I continued to write for Volume One, and that helped me stay somewhat in tune with what was happening. Intriguing new things like Phoenix Park, Native Bay, and the Open Air Festival of the Arts (plus hankerings for my favorite hangouts) collectively made me nostalgic for EC. So whenever I’d visit friends up here, I’d get my fix, and head back home quazzi-satisfied.

Now I’m leaving after another four-year stint in Eau Claire. A period during which some great strides have been made, but wholly too much stagnancy for my liking. Whether because of economic or social shifts, conservative thinking has run rampant in recent years. This has led to disappointing state cuts to arts, tourism, and education programs, the closure of several upscale restaurants and retail shops, and less financial support for our music scene. And, even worse, these flaws have felt magnified because of the national attention we’ve gotten thanks to Bon Iver and others.

I know this sounds negative and political, but really what I’m driving at is Eau Claire’s in the chrysalis stage right now. You feel cramped, uncomfortable, and dirty, but soon it’ll get really awesome … and we’ll have wings. Or rocket boots. Depending on what kind of butterfly Eau Claire is.

The reality is sinking in for me now that the things I’ve been excitingly anticipating are just now starting to line up. Just as I’m leaving. Because of course that’s how it’s destined to happen.

Until now, I lived on Forest Street in the North River Fronts Neighborhood. To hip young-uns, I say, “Across from the community garden.” To cynical long-time locals, I say, “In what you naïvely call the ghetto.” But in my heart of hearts I call it “The Neighborhood of the Future.” With its budding potential and proximity to all kinds of awesomeness, there’s not a place in Eau Claire I’d rather live. And, of course, the coolest stuff is just starting to happen. There’s a new pavilion going in at the garden, finally a grocery store opening, and the High Bridge will soon be ready for bike/pedestrian use. And said bridge will connect to trails and go across the river to a new development (West Riverside District).

I’ve always been a big proponent of downtown revitalization, so I’m excited for the changes proposed for the streets, and the new events and investments that will no doubt come with them. Not to mention The Confluence Project and other proposed improvements to the riverfronts (finally). And, oh yeah, Volume One’s new digs on Dewey and Galloway.

I say I’m excited for all these things, but obviously it’s curbed by the frustration that I won’t be able to experience them like you will. I won’t be able to take art/theater/music classes in the snazzy new facility. I won’t be able to walk a block and get brats when I’m grilling out. And I won’t work in an office with an art gallery and performance space.

I know I should be happy for all of you who get to do these things, but it’s hard to be happy for locals when you aren’t one. I’m now a tourist. But don’t feel too bad for us tourists. While previous years had them saying, ‘What’s an Oh Clare?,’ they’ll soon be saying, ‘Have you seen Eau Claire?!’