learn about this issue's cover art by Isaac Ruder 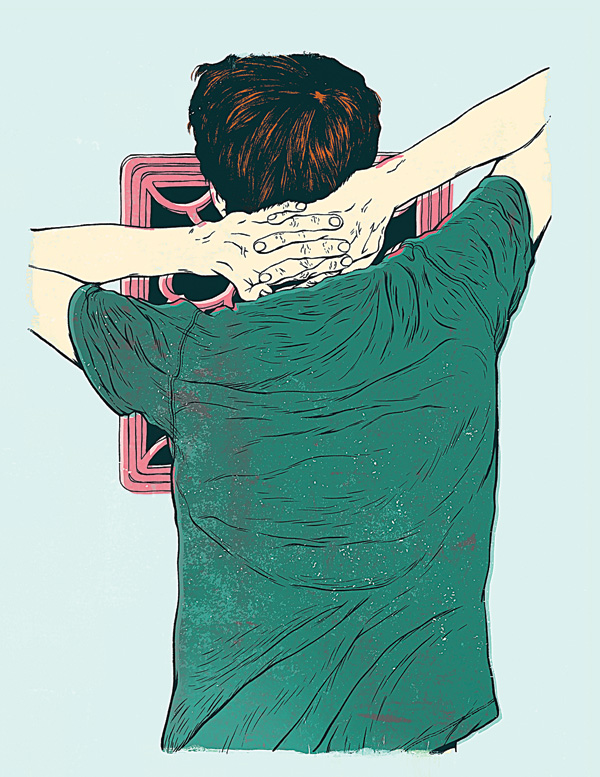 Isaac Ruder
“Inspired by a trip to the Portland Japanese Garden in Oregon, “Untitled” represents a peaceful memory of mine- – relaxation amongst the sound of softly flowing water and a vast assortment of unusual vegetation. The soft, muted colors are meant to appear quiet and still. The intricate panel design of the windows at the garden hold a delicate, interlocking pattern; each window was unique, and just plain cool.”  – The Artist
. – What we were thinking: " Isaac Ruder, creator of the piece "Untitled" made a visual impact at the Jon Andru Medley Show, a one night exhibit hosted by the Molly Marie gallery. This piece was approved by our cover committee for its following qualities: simplicity, color, process, content and layout. Lets explore these further. Simplicity is conveyed in this piece by the abundance of negative space surrounding the single character in the foreground. Varying line weights and solid blocks of color compose the figure in a two dimensional realm. The muted tones "relax" the composition and add to its modest environment. Once zoomed in, an experienced viewer can detect that the piece was hand illustrated, turned digital, and finished up with editing software. The content of the piece is intriguing as it depicts a character with his back facing the viewer. He's looking forward so its almost as if you're observing the observer's observations. The layout of the illustration is centered yet Aaymmetrical and just a bit of the background color had to be added to the top of the piece which allowed for the Volume One masthead to be masked out by the figure's head and elbow."  – V1 Designer Josh Smeltzer

Volume One finds its cover art in a number of ways, from local art shows to random emails to knowing someone who knows someone who knows a great artist. The art always originates from a current or former Chippewa Valley resident. If you'd like to submit cover art, send us a letter.
share