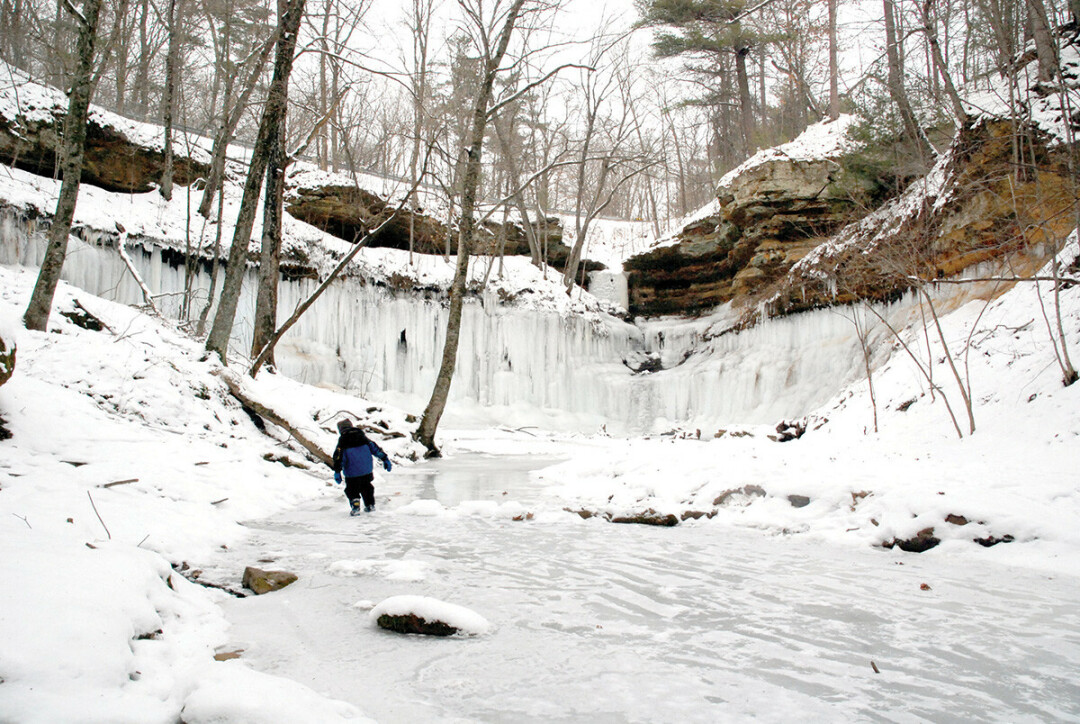 DEVIL OF A TIME. During the winter, ice formations transform the Devil's Punchbowl into a winter wonderland. (Photo by Tom Giffey)

The Devil’s Punchbowl, officially established as a landmark more than 50 years ago in 1961, is an isolated and unmatched geological gem in the Menomonie area. Carved by water over the course of thousands of years, the landmark’s name is fitting and allows for the cascading water that falls down into its sandstone hollow.

However, you’ll have to wait a few weeks to travel into the iconic gem – voted the region’s Best Kept Secret in Volume One’s annual Best of the Chippewa Valley Poll, as it is currently closed for construction.

Back in the beginning of 2021, the Landmark Conservancy – the nonprofit entity that owns the Punchbowl – launched a campaign to raise funds to replace the stairway to Menomonie’s gorgeous and rare landmark.

Last renovated in 2015 with the addition of the upper part of the stairway, the wooden stairs were originally built in 2000. By the time the fundraiser was underway at the end of April, the steps were more than ready for renovation, said the Landmark Conservancy’s Community Outreach Coordinator Sara Norman. 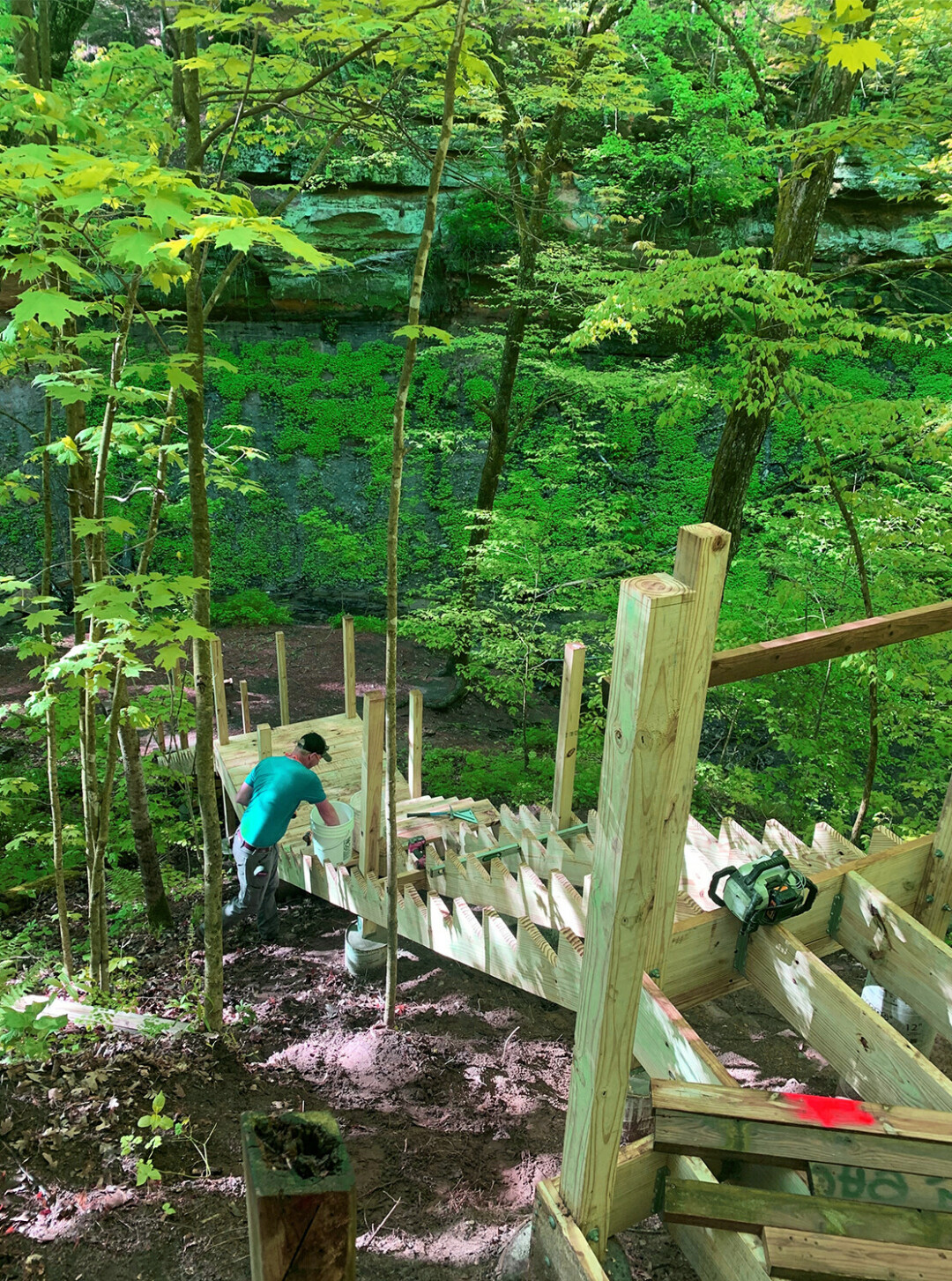 STEP BY STEP. Construction began just this spring on the Devil's Punchbowl staircase, which was originally built in 2000. (Contributed photo)

“This preserve gets a lot of visitation, like a lot, and the old stairway was worn out from visitors heading down into the bowl to experience the unique natural rock amphitheater,” Norman explained.

The steps provide a much safer and direct path down into the bowl, though the Punchbowl also has two short trails. The upper trail winds near the top of the Punchbowl and goes through a small patch of woods that overlooks down into the bowl. The second trail is straight off of the parking lot and brings visitors to a long stairway leading to the waterfall and exposed rock of the bowl. That trail has specifically been deemed a challenge and is recommended for folks who are well-versed in that type of trail who are wearing appropriate footwear.

While the $75,000 fundraising goal was reached at the end of May 2021, it wasn’t until this past April that the Landmark Conservancy was able to secure Market & Johnson to construct the new stairway. With a gorgeous proposed plan for the steps, and railings moving all the way down each flight, the new stairs will wrap even higher up than before.

“The stairway is being built out of treated lumber. A big improvement is that there are now cement footings and the tread of the stairway will be higher above the ground,” Norman said.

While the Punchbowl is stunning to the eye, it is also home to a unique array of plant life, so much so that UW-Stout Professor of Biology Amanda Little and Environmental Science student Britney Serafina have been conducting a rare plant study there. Funded by a grant from the Wisconsin Rare Plant Preservation Fund, as of July 14, the duo had identified 125 species – and more are expected. 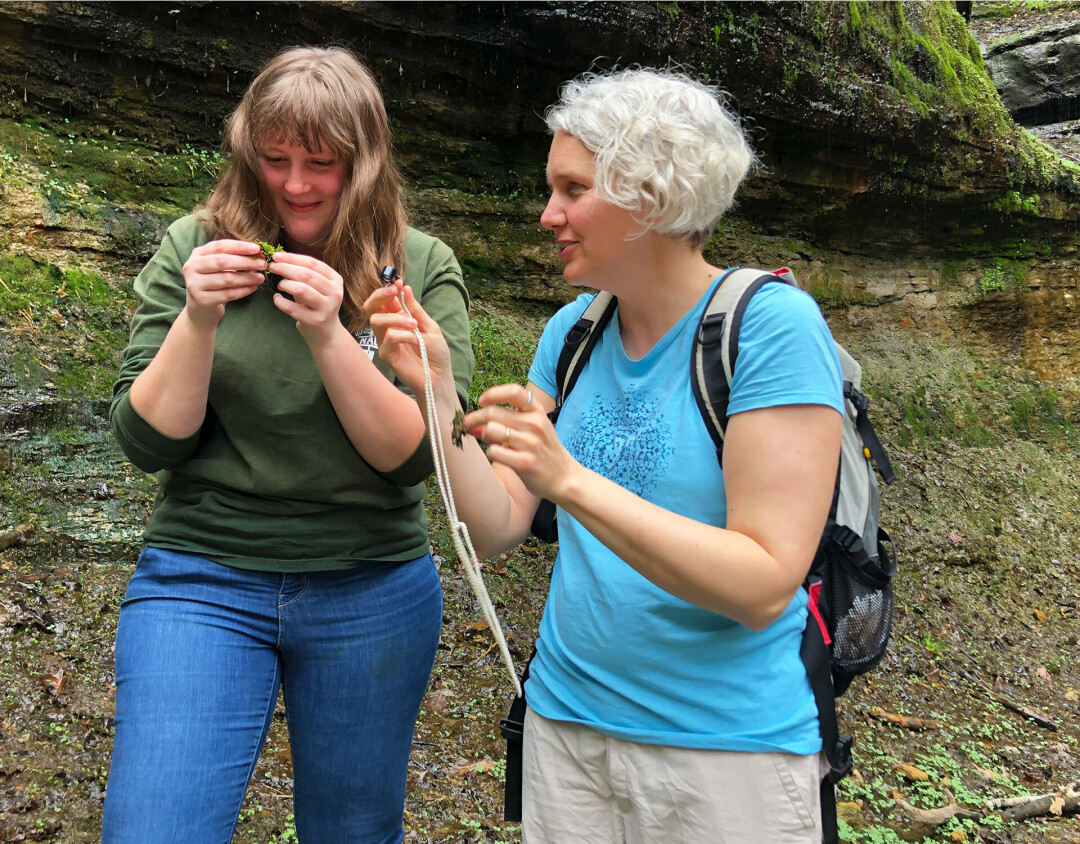 “I think what is so interesting is that it is a very, very small area with such a high diversity of species that have a huge range of habitat requirements: dry prairie to moist cliffs and northern forest,” Little said.

Such a diverse and unique concentration of habitats and plant life only furthers the importance of Punchbowl visitors respecting the land, Norman said.

Though the construction of the stairway is weather-dependent, it is expected to be finished by the end of the summer.